The cardiotoxicity of certain anticancer agents is now well-established and has led to increased cardiac screening of patients with cancer and limitation of patients' maximum cumulative chemotherapeutic dose. The effect of anticancer regimes on the heart largely involves cardiomyocyte death, leading to cardiomyopathy and heart failure, or the induction of arrhythmias. Of these cardiotoxic drugs, those resulting in clinical cardiotoxicity can range from 8-26% for doxorubicin,1,2 7-28% for trastuzumab,3,4 or 1-19% for 5-Fluorouracil.5 Regarding tyrosine kinase inhibitors (TKIs), 25 of the 27 oncology TKIs that are currently approved by the Food and Drug Administration (FDA) have some type of cardiovascular toxicity-related warning in their package inserts. For TKIs, QT prolongation and arrhythmia, ischemia, and hypertension have been reported in 2-35% of patients.6 Furthermore, newly introduced anticancer agents are commonly used as part of changed combinational regimens with significantly increased incidence of cardiotoxicity, exemplified by the combination of doxorubicin and paclitaxel.7 The mechanism of action of these drugs is often independent of their cardiotoxicity, and the basis for why these drugs specifically affect the heart has yet to be established. The genetic rationale for why certain patients experience cardiotoxicity while other patients can tolerate high anticancer drug doses has proven elusive. This has led to significant genomic efforts using targeted and genome-wide association studies (GWAS) to divine the pharmacogenomic cause of this predilection.

Achieving a tolerable balance between efficacy and toxicity is the most important challenge facing effective anticancer treatment. An individual patient's response to therapy is dependent on the plasma and target site concentration of the anticancer drugs, which are controlled by pharmacokinetic (absorption, distribution, metabolism, and excretion) and pharmacodynamic factors. Inherited polymorphisms in drug metabolizing enzymes and transporters can alter their expression and/or activity, influencing pharmacokinetics. Genetic alterations in target enzymes, transporters, ion channels, and receptors may influence drug pharmacodynamics.8 Thus, a realistic option to improve management and outcome of anticancer drug-induced cardiotoxicity is the development of individualized treatment strategies including the use of predictive genetic host factors. Extensive efforts in pharmacogenomics research have been conducted in an attempt to uncover the genetic variants associated with anticancer agents' clinical outcome. Despite this enormous effort, few biomarkers are routinely used in clinical practice, which reflects the complexity of identifying causal variants. Currently there are more than 150 drugs with FDA-approved pharmacogenetic testing information in their drug labels, most of which are anticancer agents (Figure 1). 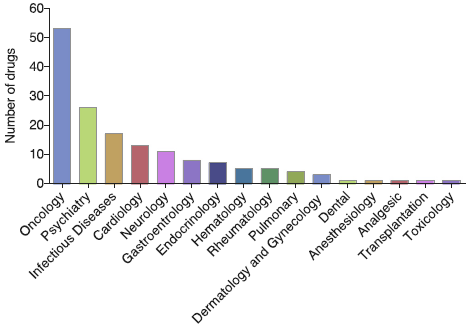 Although the terms "pharmacogenetic" and "genetic" testing are used interchangeably, there is a significant difference in their target population and the manner in which each test is used in clinical investigation. Pharmacogenetic testing targets subjects who are experiencing a specific disease. This method is used to provide guidance in selecting the appropriate therapeutic agent, and, in some instances with the presence of sufficient clinical data, for individualized dosing selection. On the other hand, genetic testing is utilized when assessing a relative risk of a target population to develop a certain disease, as well as when predicting patients' prognoses. Similarly, somatic (tumor) and germline (individual) mutations are two types of genetic mutations involved in predicting cancer outcome. Somatic mutations are genetic variations in the tumor tissue that affect tumor microenvironment and determine the cancer profile, including prognosis, metastasis, and aggressiveness. Studying somatic mutations will be beneficial not only in predicting disease prognosis but also in developing tumor-specific therapeutics that are capable of targeting particular oncogenic aberrations. Germline mutations are genetic variants in a patients' genome. Inherited mutations in drug transporters and/or drug metabolizing enzymes determine the concentration of drug at the target site, subsequently tuning the efficacy and toxicity of anticancer therapeutics. Additionally, germline mutations in certain signaling pathways (e.g., genes controlling DNA repair machinery, cell division, and reprogramming) may cause a predisposition to cancer. Therefore, the study of germline aberrations has significant prognostic value. Accordingly, obtaining informative genetic information about both germline and somatic polymorphisms will ideally allow us to draw conclusive decisions about disease prognoses and adequate therapeutics.9

In terms of the number of SNPs investigated, both genomic study approaches are quite different. Candidate gene studies investigate anywhere from one SNP to a complete gene sequence. GWAS analyze a range of several hundred thousand to millions of SNPs. The momentous advances in the field of next-generation sequencing, analysis algorithms, and data storage capacity, coupled with the experimental evidences revealing the role of genetic variation in various diseases, have shifted the paradigm toward whole genome studies to help identify SNPs that protect against or predispose individuals to different clinical conditions and phenotypic traits. The number of GWAS published reports has dramatically increased over the last decade from fewer than 50 studies in 2006 to about 2,000 studies in 2013.10 GWAS are based on the principle of linkage disequilibrium (LD), which exists when two or more SNPs at discrete loci are found together more frequently than would likely happen by chance. Accordingly, analyzing only a selected set of tag-SNPs across the genome to act as surrogates for several other linked SNPs gives complete information about the un-typed SNPs. The LD-based approach is very useful as it significantly decreases the number of genotyped SNPs while providing information about the descent number of genetic variants. Nevertheless, this methodology raises the question of whether or not the identified SNP is the causal one. Even though the LD-based genome-wide study is an appropriate tool for mapping Mendelian traits that are predisposed due to the segregation of risk alleles within a single gene, it is not as efficient when it comes to polygenic traits like doxorubicin-induced cardiotoxicity. Multiple genes are implicated in doxorubicin-induced cardiotoxicity, and it thus becomes nearly impossible to identify causal SNPs with just a single association study.11 Population stratification constitutes a major limitation for GWAS because heterogeneous subject recruitment significantly affects the output of pharmacogenomic studies. Ethnically diverse populations have different LD profiles caused by distinct recombination rates. Thus, SNPs having significantly different minor allele frequencies exist among diverse populations. An exemplary African population has very short LD haplotypes because of cumulative recombination events, which make it even more difficult to capture the causal polymorphisms.12 Because minor differences in ethnicity between cases and controls can result in false positives even after exclusion of extreme outliers, an odds ratio of at least 2-3 is required for an association to be robust enough to overcome cryptic population stratification. Odds ratios <1.5 are questionable regardless of the p value.13 Failure to identify large insertions and deletions is considered another GWAS limitation because GWAS primarily focus on single base pair alterations rather than larger genetic mutations. Importantly, the majority of identified GWAS SNPs are located in intergenic or intronic regions and, in many instances, in genes that are irrelevant to the studied phenotype, where the biological relevance of identified polymorphisms is far from being well-described.

Genetic background and mechanistic explanation for doxorubicin-induced cardiotoxicity, as well as intra-individual variability across the population in susceptibility to cardiotoxic events, have yet to be determined. We believe that a comprehensive whole genome platform based on whole genome genotyping, patient-derived hiPSC-CMs, and utilization of CRISPR technology will help pinpoint robust genotype/phenotype associations and provide functional mechanistic validation for the involvement of candidate genes/SNP(s)/haplotypes in doxorubicin-induced cardiotoxicity (Table 1 and Figure 2).14 This methodology will generate a set of validated SNPs that are predictive for cardiotoxicity and can be directly used in a clinical cardiotoxicity algorithm that can classify patients who are more susceptible to doxorubicin-induced cardiotoxicity. Furthermore, this platform would provide cardio-oncologists with an invaluable tool to individualize patient-specific anticancer therapies before beginning treatment, rather than experience undesirable cardiotoxicity retrospectively. This methodology will help achieve maximal benefit and minimal side-effects from evolving anticancer therapeutics, thus significantly improving cancer treatment. 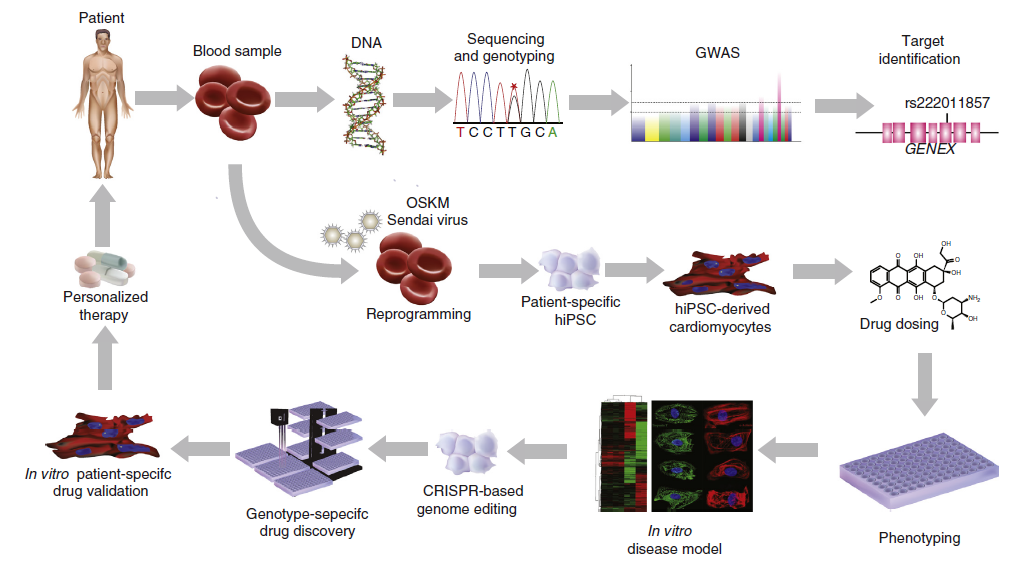 Schematic of the process for elucidating the role of genetic mutations in anticancer drug-induced cardiotoxicity (from Magdy et al., 2016).

YOU ARE HERE: Home > Latest in Cardiology > Pharmacogenomics in Cardio-Oncology