Acute myocardial infarction (AMI) affects nearly 1 million people in the United States each year.1 Atherosclerosis is the most common cause of AMI, although other causes include coronary vasospasm, embolism, vasculitis, and spontaneous coronary dissections. Spontaneous coronary artery dissection (SCAD) has emerged as an important etiology of acute coronary syndrome (ACS) in young otherwise healthy women who do not have risk factors for atherosclerosis. SCAD is estimated to cause 1-4% of ACS and up to 40% of myocardial infarctions in women less than 40 years of age.2,3 SCAD is a non-atherosclerotic abnormality of the coronary artery characterized by development of a dissection plane within the arterial wall resulting in an intramural hematoma that can cause dynamic flow obstruction and result in myocardial infarction, congestive heart failure, and sudden death.

SCAD has been associated with numerous conditions (e.g., pregnancy or postpartum, extreme emotional stress or physical exertion, hypertensive crisis, systemic inflammatory conditions, vascular Ehlers-Danlos syndrome (type IV), Marfan syndrome); however SCAD is the most common coronary artery manifestation of fibromuscular dysplasia (FMD).4 FMD is a non-inflammatory arteriopathy characterized by medial fibroplasia, alternating areas of smooth muscle loss with arterial dilatation and fibromuscular ridges (Figure 1).5 FMD most commonly affects the media, although the intima and adventitia can also be involved. FMD occurs in middle aged (mean age 52 years old) women (91%) and is widely known to affect renal, cerebral, mesenteric and other peripheral arteries, but is less well known to affect coronary arteries.5 AMI caused by coronary artery dissection may be the first manifestation of FMD and the angiographic appearance of these lesions may represent SCAD or mimic typical atherosclerosis. An estimated 1.8% of patients with FMD initially present with AMI from SCAD.5 These patients are demographically similar to those initially presenting with renal or cerebral artery FMD.5 Less common coronary artery manifestations of FMD include aneurysms, occlusions, long-smooth narrowing or distal tapering of the mid-distal coronary arteries, intramural hematoma, spasm, and tortuosity.6-8 While the cause of FMD remains unknown, certain genes and female hormone expression are probably contributing factors. Moreover, SCAD events occurred in 18% of SCAD women during the immediate postpartum period, similarly suggesting a hormonal milieu and/or hemodynamic shear stress as triggers.9,10 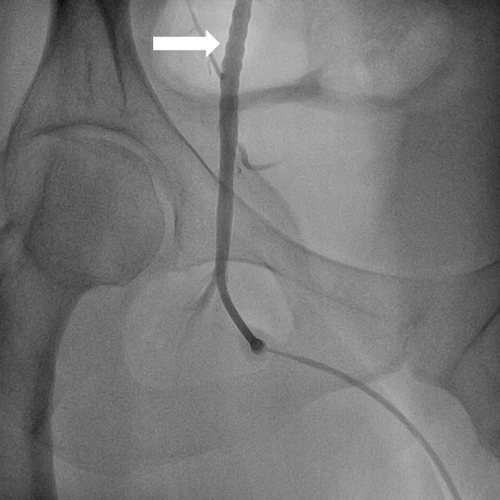 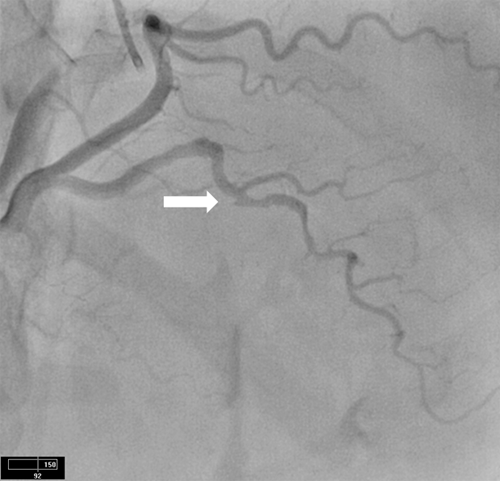 Treatment recommendations for FMD associated AMI are entirely consensus driven, as there are no clinical trials available to guide care. A medical management approach is preferred in stable patients without active myocardial ischemia because clinical experience suggests that SCAD can improve over time in these low risk patients.6,12 Saw et al. demonstrated resolution of coronary artery dissection on repeat angiography (34 to 795 days later) in 10 subjects with AMI and SCAD that did not show evidence of atherosclerosis.6 Similarly, Afonso et al. reported resolution of SCAD in nearly half of a cohort of 45 AMI patients with SCAD at a median of nine months on follow up coronary angiography.12 Percutaneous coronary intervention (PCI) for SCAD carries significant risk. In the largest retrospective study to date of 189 patients who presented with SCAD, PCI for stable SCAD was associated with high rates of complications and emergency CABG, compared to those who received medical management, even in patients with preserved coronary artery flow.13 This high risk of adverse outcomes is related to dissection propagation with coronary wire manipulation, and the attendant risk of more extensive myocardial infarction. In contrast, conservative therapy was associated with more favorable in-hospital outcomes.13

Medical therapy for AMI due to FMD is similar to that for acute coronary syndromes in general. Dual antiplatelet therapy with acetasalicylic acid (ASA) and an ADP receptor inhibitor is recommended, although it remains unstudied in clinical trials in an FMD population.8,17 After one year, ASA should be continued indefinitely. Post MI beta-blocker therapy is also recommended, and may help to improve BP control in hypertensive patients with renal artery FMD. If hypertension remains poorly controlled despite multi-drug therapy in those with prior SCAD and known renal artery FMD, renal artery balloon angioplasty may be appropriate. According to the 2011 ACC/AHA guidelines on the management of patients with extra-cranial carotid and vertebral artery disease, administration of platelet inhibition medications can be beneficial in patients with FMD of carotid arteries to prevent thromboembolism, however for patients with symptomatic cervical artery dissection, anticoagulation may be recommend for 3-6 months followed by antiplatelet therapy.14 It is unclear if statins are of benefit in this patient population, however retrospective study has demonstrated an association with recurrent SCAD.10 In the absence of trial data, it would seem reasonable to follow a typical post MI secondary prevention algorithm for statins. Angiotensin-converting enzyme inhibitors (ACE-I) are recommended in hypertensive patients with renal artery FMD and in those with depressed LV function.

PCI with stents or CABG may have a limited role in unstable SCAD patients with active myocardial ischemia. Stents should not be over dilated to avoid propagating the dissection plane.12,17 Alfonso et al. reported in a small case series residual, non-flow limiting coronary artery dissections in 7 of 14 FMD patients who underwent coronary artery stenting.12 After two years, only three patients experienced serious adverse events, with one dying of CHF and two requiring repeat revascularization. No patient had myocardial infarction or sudden death during follow-up. The event free survival at three years was 94% and 88%, respectively, for patients with isolated SCAD and SCAD associated with coronary artery disease. In another series of 87 patients, two-thirds of patients underwent PCI coronary revascularization.15 However, PCI was technically successful in only 65% and dissection propagation occurred in 16% of patients. Coronary artery bypass grafting (CABG) may be indicated in cases of PCI failure or multi-vessel disease; however, arterial and venous conduit failure rate is high over time, likely due to the high likelihood of spontaneous resolution of the SCAD associated coronary artery obstruction.16 Therefore, PCI or CABG is rarely indicated for coronary artery FMD and SCAD.

In conclusion, SCAD is becoming more recognized as an important cause of ACS in young women. Although FMD has emerged as an associated and identifiable cause of SCAD, the diagnosis requires a high degree of suspicion and careful angiographic inspection as PCI can carry increased procedural complications in SCAD patients.