Editor's Note: This is Part Two article of a two-part Expert Analysis. Click here for Part One.

Cardiac sarcoidosis is a manifestation of systemic sarcoid disease that leads to significant morbidity and mortality. The prevalence of clinically evident cardiac involvement is ~5%, though this may be an underestimation given the difficulties of diagnosing cardiac sarcoidosis.1,2 The autopsy data suggest that cardiac involvement is 20-25%. Current diagnostic criteria are based on the modified Japanese Ministry of Health and Welfare (JMHW) guidelines published in 2006 and the Heart Rhythm Society (HRS) consensus statement published in 2014.3,4 Both involve either a histological demonstration of cardiac sarcoidosis on endomyocardial biopsy or integration of relevant clinical and imaging features (Figure 1).3 As a result, advanced imaging modalities such as cardiac magnetic resonance (CMR) and 18F-flurodeoxyglycose (FDG) positron emission tomography (PET) have emerged as important tools to improve the diagnostic certainty and management of cardiac sarcoidosis. Although both modalities have unique strengths, FDG-PET has a growing evidence base that suggests it is an excellent tool for early diagnosis, prognostication, and follow-up of patients with cardiac sarcoidosis. The pre-imaging preparation required for FDG-PET consists of high fat/no carbohydrate diet for 18-24 hours, plus unfractionated heparin intravenously (10-50IU/kg) 15 minutes prior to FDG injection. The scans are obtained 90 minutes after FDG injection. 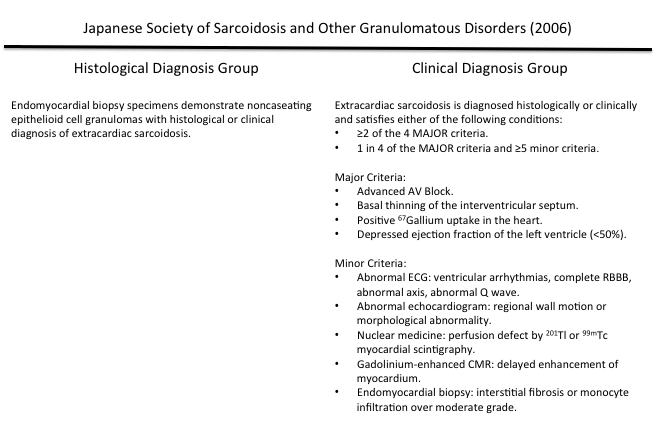 Both FDG-PET and CMR offer improved diagnostic accuracy in the evaluation of suspected cardiac sarcoidosis. The sensitivity and specificity of FDG-PET as an initial diagnostic tool for cardiac sarcoidosis was evaluated in a recent meta-analysis of 164 patients with systemic sarcoidosis and found to be 89 and 78% respectively, using the JMHW guidelines as the gold standard.5 However, several studies have shown that imaging identified myocardial involvement in significantly more patients than the standard clinical evaluations based on JMHW guidelines.6 Only one small study has compared FDG-PET directly with CMR and found that PET may have a higher sensitivity than CMR (88 vs. 77%), though the difference was not significant given the small study population.7 In general, FDG-PET has a higher sensitivity, and CMR may have a slightly higher specificity in the diagnosis of cardiac sarcoidosis.3 This pattern in testing efficacy likely reflects the different pathology identified by the two modalities. The foundation of CMR diagnosis is based on the presence of mid-wall and subepicardial late gadolinium enhancement (LGE), which identifies fibrosis. In most cases, fibrosis represents more advanced disease. In contrast, FDG-PET identifies areas of pathologic glucose uptake and inflammation. This is accomplished through a combination of myocardial perfusion imaging using 13N-Ammonia or 82Rubidium and inflammation imaging using FDG. Resulting image interpretation captures a wider spectrum of disease classifying findings into four categories:

The ability of FDG-PET to characterize inflammation and different stages of myocardial injury results in potentially identifying cardiac sarcoidosis earlier and theoretically improving the sensitivity of the test at the expense of some specificity. As a diagnostic test, the higher sensitivity of FDG-PET is important in capturing earlier disease, which may improve responsiveness to immunosuppressive therapy.9 Of note, fluid-sensitive T2-weighted CMR imaging and T2 mapping strategies have been suggested as a potential correlate to FDG uptake by characterizing myocardial edema with minimal to no LGE in patients with cardiac sarcoidosis. However, this technique has not been well-validated in the diagnostic evaluation of cardiac sarcoidosis and, as such, is not included in the JMHW or HRS criteria.10,11 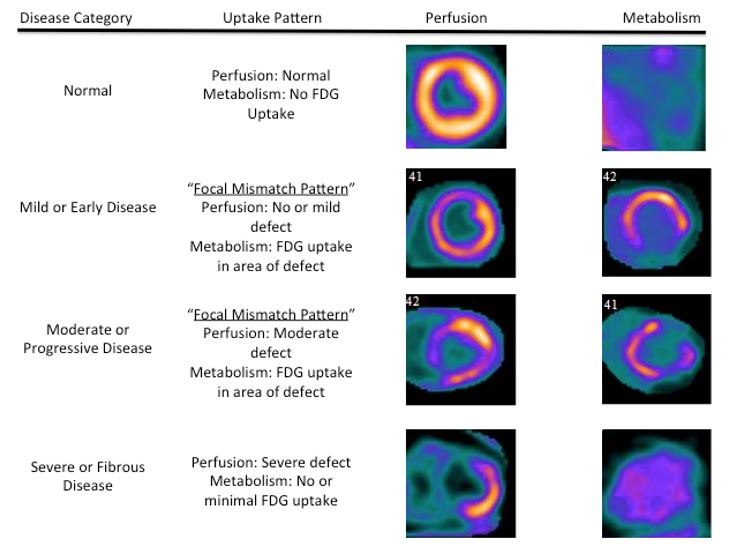 Quantification of myocardial FDG uptake in sarcoidosis is the foundation for the most important advantage of FDG-PET over CMR in cardiac sarcoidosis imaging: the ability to assess response to therapy over time (Figure 3).9,17 There are no randomized clinical trials evaluating the efficacy of high-dose glucocorticoids in cardiac sarcoidosis. However, retrospective studies suggest that steroid therapy is associated with improved outcomes related to LVEF and death. Current follow-up of patients on corticosteroid therapy typically includes annual Holter monitoring and transthoracic echocardiography to evaluate for changes in ejection fraction or arrhythmia burden. However, these methods are less sensitive for detecting clinical changes than the use of advanced imaging modalities to assess response to treatment. Osborne et al. performed a prospective evaluation of 23 patients with cardiac sarcoidosis followed over a median of 2 years, the majority of whom were treated with corticosteroids (91%), angiotensin-converting enzyme/ angiotensin-receptor blocker (78%), and beta-blockers (83%). All patients had at least two PET exams at different time points, during which FDG uptake was measured using maximum standardized uptake value and standardized uptake value volume. The authors identified a significant inverse relationship between LVEF and standardized uptake value measurements. Additionally, non-responders to therapy (identified by changes in FDG uptake) had a significant decrease in LVEF compared with responders who demonstrated an increase in LVEF.15 These data again highlight the potential prognostic importance of FDG quantification through its relationship with LVEF. However, more importantly, it offers a method to monitor patients during therapy to identify responders and non-responders early on and decide who may benefit from intensification versus tapering of therapy.

Figure 3: Qualitative and Quantitative Changes in FDG Uptake in the Anterior and Lateral Walls in a Patient With Cardiac Sarcoidosis Pre- and Post-Immunosuppression Therapy 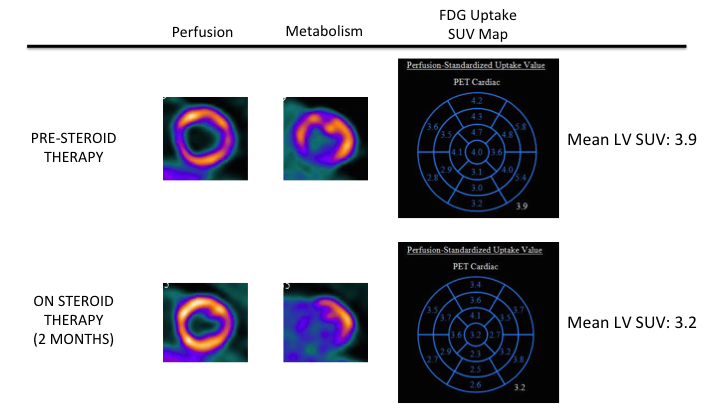 Finally, from a purely technical perspective, the applicability of CMR imaging in patients with cardiac sarcoidosis, especially in follow-up, is limited by the presence of non-CMR-compatible cardiac devices such as permanent pacemakers and ICDs. FDG-PET also offers an opportunity to perform concomitant whole-body FDG imaging to identify patients who may have extracardiac sarcoidosis.1 PET can be safely performed in patients with intracardiac devices and advanced renal dysfunction.

In summary, FDG-PET is an excellent diagnostic modality for the evaluation and management of cardiac sarcoidosis. A criticism of FDG-PET is its decreased specificity in some studies compared with CMR. These studies, all over 3 years old, may underestimate the specificity of FDG-PET given a growing experience identifying non-specific variations of FDG uptake (i.e., in the lateral wall in the absence of a perfusion defect) that represent normal myocardium.8,3 In addition, disease activity can be quantified with FDG-PET using standardized uptake value measurements, which cannot be performed with CMR. Larger, prospective studies are needed to evaluate the utility of these quantitative methods in the prognosis and follow-up of patients with cardiac sarcoidosis. However, recent initial data suggest that there is significant applicability for quantitative analysis to refine cardiac risk and monitor clinical course during treatment. CMR remains very important in the work-up of cardiomyopathy and provides unique adjunct information, including biventricular function, wall thickness, and regional wall motion, that cannot be obtained with FDG-PET. CMR (myocardial damage) and FDG-PET (inflammation) findings are complimentary because they identify different pathological processes. CMR methods such as fluid-sensitive T2 imaging may provide earlier, reversible evidence of myocardial sarcoidosis activity and provide a measure for future clinical follow-up; however, these methods are not well-studied to date in the cardiac sarcoidosis population. As such, in patients with suspicion of cardiac sarcoidosis or with known cardiac sarcoidosis, FDG-PET may be a reasonable test for initial diagnosis, prognostication, and follow-up.

YOU ARE HERE: Home > Latest in Cardiology > FDG-PET is a Superior Tool in the Diagnosis and Management of Cardiac Sarcoidosis