Pathological and Observational Assessment of the Early, Late, and Very Late Outcomes Related to Stent Malapposition

Stent thrombosis (ST) is one of the most serious adverse events after percutaneous coronary intervention (PCI) and is associated with significant morbidity and mortality. Understanding the causes of ST may allow us to improve long-term outcomes after PCI. Stent malapposition, defined as a gap between the stent strut surface and the arterial wall greater than the strut thickness itself, is not an uncommon finding after PCI and has been reported to be as high as 25-62% of stented lesions.1,2 However, its significance with respect to ST remains more nuanced. Histologic studies from our group have suggested an important association between stent malapposition and ST, and this has been confirmed in some but not all clinical studies.3,4 In this short review, we specifically discuss the role of stent malapposition in early, late, and very-late ST from the pathologic perspective.

Although the focus of the interventional cardiology community had largely turned to late (>30 days) and very late (>1 year) ST after safety concerns emerged about first-generation drug-eluting stents (DES), subsequent improvement in platform designs and polymers have reduced rates of late and very late ST to <1%.5 In fact, the highest density of ST events continue to occur in the early period.6 Although discontinuation of dual antiplatelet therapy (DAPT) is one of the strongest predictors of early ST (occurring <30 days before PCI), the majority of early ST occurs while patients are still taking DAPT. In clinical studies, early ST has been heavily linked to procedure-related factors that result in suboptimal stent implantation. Among the risk factors that have been proposed, stent underexpansion and residual dissections resulting in luminal obstruction are the most consistent findings, although stent malapposition has been reported in some but not other clinical studies. In a pathologic study, we compared 37 lesions from 34 patients with early ST to 25 patients/lesions with patent stents, all of whom died within 30 days of stent implantation.7 Among the independent predictors of early ST were necrotic core prolapse, medial tear, and incomplete stent apposition. In this series, 34% of sections showed the presence of malapposition versus 18% in those with patent stents (Figure 1). Malapposition distance was also greater in those with thrombus (204 mcm) versus those without (51 mcm). Our data suggest that malapposition might not be a binary variable in terms of its predictability for early ST because even cases with patent stents had some evidence of malapposition. The degree and extent must also be taken into account, as well as its association with other known causes of early ST. For instance, in an intravascular ultrasound substudy of the large ST-segment elevation myocardial infarction trial (HORIZONS-AMI [Harmonizing Outcomes With Revascularization and Stents in Acute Myocardial Infarction]), stent malapposition was not a predictor of early ST, but smaller final lumen diameter and inflow or outflow obstruction were.8 Thus, it remains uncertain how much malapposition contributes to early ST, especially when it is minor in degree. 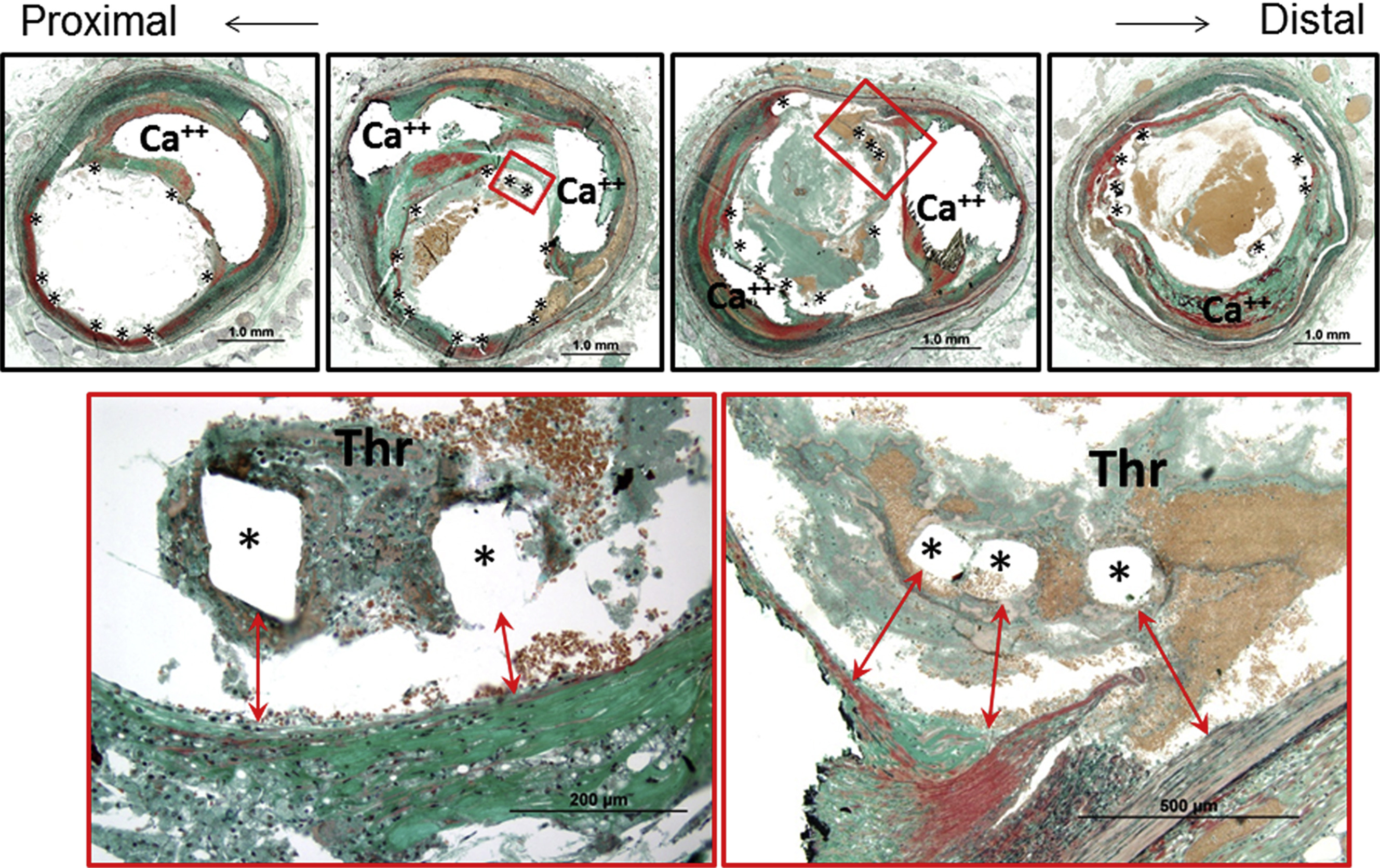 The degree of malapposition becomes even more pertinent when we discuss its impact on late and very late ST. In a human pathologic analysis of first-generation DES of implant duration >30 days, we compared 28 lesions with thrombus to 35 lesions with patent stents of similar duration.9 Multiple logistic generalized estimating equations modeling demonstrated that endothelialization was the best predictor of ST, and the morphometric predictor that best correlated with endothelialization was uncovered struts. Although malapposition was not specifically examined in this study, the relationship between malapposition of uncovered struts has been examined in clinical studies. Foin et al. examined the relationship between the degree of malapposition, flow disturbances, and neointimal coverage of stent struts in a retrospective optical coherence tomography (OCT) study.10 Struts with malapposed distance <100 mcm had minimal disturbances on blood flow compared with floating struts with more significant malapposition distance. Segments with malapposition <100 mcm had minimal impact on strut coverage, and distances 100-300 mcm and >300 mcm had significantly more uncovered struts. Again, this study reinforces the concept that the degree of malapposition rather than its presence is probably what is important in terms of clinical outcomes. In a more recent study examining OCT-determined causes of very late ST, the major cause of thrombosis seen in 29.3% of cases was malapposed and uncovered struts followed by neoatherosclerosis in 25.9%.4 Taken together, these data suggest that malapposition above a certain threshold may play an important role in late and very late ST, likely through its effect on turbulent blood flow.

The implications of these findings are that intracoronary imaging at the time of PCI might help improve long-term outcome with respect to ST. Indeed, in the non-randomized ADAPT-DES (Assessment of Dual Antiplatelet Therapy With Drug Eluting Stents) study, intravascular ultrasound-guided PCI was associated with a 60% relative risk reduction in definite or probable ST at 1 year.12 There has been no randomized trial to date comparing outcomes after intracoronary imaging-guided PCI versus angiography-guided PCI. Thus, the routine use of imaging-guided PCI remains at the operator's discretion.

The type of presentation such as acute coronary syndrome or stable coronary artery disease also matters for determining ST risk because it influences the development of risk factors for ST. In the era of first-generation DES, delayed arterial healing was more pronounced at the culprit sites of patients with acute coronary syndrome when treated with these first-generation devices, which predisposed toward late thrombosis.20 However, as mentioned, delayed healing is much less of a concern in second-generation DES according to pathological18 and clinical studies.21 We believe that stent properties such as thinner strut thickness and anti-thrombogenic polymers account for this.22 In preclinical study in the porcine arteriovenous shunt model, thrombus formation was the least in second-generation DES (fluoropolymer-based everolimus-eluting stent) compared with contemporary biodegradable polymer-based DES.22 What remains unresolved by second-generation DES may be the issue of malapposition, especially in the setting of treatment for acute myocardial infarction where mural thrombus and vessel spasm may obscure true vessel wall dimension, leading to lack of stent apposition. As the thrombus or spasm resolves, late-acquired malapposition may occur. Use of adjunctive anti-spasm agents such as intracoronary nitroglycerine or anti-thrombotic agents such as platelet glycoprotein IIB/IIIA inhibitors may be of some help but have not been well-studied in this situation.

The design and engineering aspects of BVS become relevant in so far as they also dictate many of the limitations of this technology. Metallic stents consist of a thin metallic cage of considerable radial strength, which allows exclusion of plaque, consistent with the properties of metal. Because the polylactide polymer is not as strong as metal, BVS has considerably thicker struts (150 mcm) in order to improve its radial strength, which still is on the order of one-half that of a BMS. Also, the vessel coverage by BVS is close to 30% versus 12-13% for contemporary metallic DES;24 this difference results in excessive foreign body that cannot be tolerated, especially in the absence of DAPT for the long term. Inflammation as the polymer degrades may be different in humans versus animals, but this is unlikely to be a major cause. Degraded polymer has been mentioned by others but needs to be proven.

Although further work has not detailed the exact causes of BVS thrombosis, the limitations of this device in terms of impaired endothelial cell coverage, potential issues involving implantation techniques and/or scaffold integrity, larger imprint on the vessel wall, and the prolonged duration of degradation (36-42 months) are a key issues of focus. It is important to understand whether these apparent weaknesses in the BVS design predispose toward late thrombotic events.

Clinical reports using OCT have documented uncovered struts, malapposition, strut discontinuity, and underexpansion in patients presenting with BVS thrombosis.25 Malapposition may be an important issue for BVS thrombosis given the much larger scaffold strut width and its reduced radial strength. Stent recoil even after vigorous postdilation may cause malappostion, especially in the setting of calcified plaque. The large surface area of the BVS platform means that flow disturbances from malapposed struts would be more significant compared with current thin strut metallic DES (60-90 mcm). The larger surface area could lead to greater platelet activation and thrombotic potential, especially when combined with an increased likelihood of uncovered struts. Moreover, the impact of malapposition may be especially problematic in BVS because as the scaffold dismantles, the malapposed portion may become a nidus for thrombosis.26 It remains to be seen whether appropriate aggressive predilation, postdilation, and vessel sizing can significantly improve outcomes after BVS implantation.

In conclusion, stent malapposition, whether acute or acquired, continues to be a not-infrequent finding after PCI, but its significance remains unclear with regard to ST, especially in cases where the degree of malapposition is minor. Larger degrees of malapposition are clearly clinically important and may delay neointimal stent strut coverage and play an important role in the pathophysiology of late and very late ST. Randomized trials examining the importance of intravascular imaging-guided PCI for the prevention of adverse cardiovascular events are lacking. Nonetheless, the interventionalist should be aware of the significance of stent malapposition and in cases where its extent is large, its resolution is recommended.

YOU ARE HERE: Home > Latest in Cardiology > Pathological and Observational Assessment of the Early, Late, and Very Late Outcomes Related to Stent Malapposition