Cardiovascular disease (CVD) and cancer are among the leading causes of morbidity and mortality in the United States and are responsible for nearly half of all deaths.1 Improved cancer treatments and an ageing population have resulted in a growing number of cancer survivors that is expected to increase from 15.5 million to 20 million over the next decade.2 An emerging and continuously evolving paradigm highlights the synergistic link between CVD and cancer through shared modifiable risk factors including tobacco use, obesity, diabetes mellitus, diet quality, physical activity, and alcohol use. In 2004, a scientific statement endorsed by the American Heart Association (AHA), American Cancer Society, and American Diabetes Association called for the targeting of these shared risk factors for more collaborative and effective preventive health care strategies.

Recent reviews on this topic have highlighted potential shared biological mechanisms and the modulation of shared risk factors during active therapies for cancer.3,4 The focus of this article is to provide a concise review of shared modifiable risk factors for cancer and CVD, raise awareness of the bidirectional and multiplicative risk between cancer and CVD, and incorporate AHA's Life's Simple 7 to provide a practical framework to guide both preventive cardiology and preventive oncology efforts.

Cigarette smoking increases the risk of CVD by 2 to 4 times and the risk of lung cancer by 25 times, in addition to having a causal relationship with at least 11 additional types of cancer.5 More pertinently, smoking cessation is associated with a 50% reduction in coronary heart disease compared with those still smoking after just 1 year and a 50% reduction in the risk of cancers of the mouth, throat, esophagus, and bladder after 5 years.6 After 10 years of smoking cessation, CVD risk approaches that of nonsmokers, and lung cancer mortality is reduced by 50% compared with continued smokers. The proportions of cancer and coronary heart disease deaths in the United States attributable to smoking are both approximately 30%.6,7

Obesity is a major independent risk factor for CVD, cancer, and diabetes mellitus and is clustered with other shared risk factors including hypertension and hyperlipidemia. Approximately two thirds of the US population is either overweight or obese, and this, along with the increased prevalence of diabetes, is responsible for an estimated loss of 715,000 life-years from 1980 to 2000 in comparison to the gain of 2,770,500 life-years through reductions in smoking, cholesterol, blood pressure, and physical inactivity levels.8 In 2012, the burden of disease attributed to an elevated body mass index (BMI) was estimated at nearly 500,000 new cancers worldwide, making it the second-highest ranked modifiable cancer risk factor after smoking in most western populations.9 Avoidance of weight gain and weight management should be the primary focus through healthy eating and physical activity. Being overweight or obese at the time of cancer diagnosis appears to increase the risk of recurrence and reduce the likelihood of disease-free and overall survival during cancer survivorship.10

According to 2014 national data, 30% of the US adult population does not engage in any leisure-time physical activity, and physical inactivity is responsible for 12.2% of the global burden of myocardial infarction (MI).11 Physical activity is well-known to reduce the risk of CVD, all-cause mortality, and certain cancers including colon, breast, and endometrial cancers.12 In a recent pooled analysis of 1.44 million participants, increased leisure-time physical activity, adjusted for BMI and effect modification by smoking status, was associated with significantly lower risk of several additional cancers, including esophageal, lung, kidney, myeloid leukemia, myeloma, head and neck, rectum, and bladder.12 Physical activity after a cancer diagnosis has also been associated with less recurrence.13

Healthy dietary habits affect a broad range of established and novel cardiovascular and cancer risk factors; therefore, the focus has been on quantifying the total effects of a healthy dietary pattern on clinical outcomes. The Global Burden of Disease 2010 Study revealed that suboptimal dietary habits were the leading cause of both mortality and disability-adjusted life-years lost, exceeding even tobacco.14 The PREDIMED (Prevención con Dieta Mediterránea) study was a randomized control trial that confirmed observational studies by demonstrating a 30% reduction in the risk of stroke, MI, and cardiovascular death in those patients randomized to Mediterranean-style diets rich in extra-virgin olive oil or mixed nuts.15 Breast cancer incidence was a pre-specified secondary outcome of the trial, which was reduced in individuals receiving the Mediterranean-style diet as well.16 Meta-analyses of prospective cohort studies have repeatedly shown that the consumption of red meat and processed meat increases the risk of colorectal cancer by 20-30%.17

Hypertension and hyperlipidemia are two well-established CVD risk factors; however, results are mixed regarding their being independent risk factors for cancer. Among patients with cancer, however, hypertension and hyperlipidemia are common and appear to modulate cardiovascular risk in a multiplicative way. In the Childhood Cancer Survivor Study, adult survivors of childhood cancer who received chest-directed radiation therapy and had a history of hyperlipidemia were at an increased risk for coronary artery disease; this risk increased fourfold when a history of hypertension was included as well.18 Similarly, adult recipients of autologous hematopoietic stem cell transplantation with a history of hypertension who received high-dose anthracycline therapy (≥250 mg/m2) had a 35-fold increased risk of heart failure (HF).19 Cholesterol-lowering medications, including statins, have been reported to have a role in preventing breast cancer recurrence (which was recently confirmed in an observational study of 8,010 postmenopausal women with early-stage hormone receptor-positive invasive breast cancer), in part by reducing levels of an estrogen-receptor ligand (27-hydroxycholesterol), which has been shown to regulate estrogen-receptor-dependent tumor growth.20

Diabetes Mellitus is a well-established risk factor for CVD. In a collaborative meta-analysis of 820,900 individuals from 97 prospective studies, diabetes mellitus was associated with increased cardiovascular death (hazard ratio [HR] 2.32; 95% confidence interval [CI], 2.11-2.56) and modestly associated with increased cancer death (HR 1.25; 95% CI, 1.19-1.31), with cancer deaths specifically attributed to liver, pancreas, ovary, colorectal, lung, bladder, and breast.21 Although individuals with diabetes mellitus appear to be at increased risk for developing many cancers, it is unclear if this link is causal or via shared common risk factors including obesity, which tend to commonly cluster in diabetics. The most robust epidemiologic data for a direct causal link between diabetes mellitus and cancer has been seen for breast cancer, intrahepatic cholangiocarcinoma, colorectal cancer, and endometrial cancer.22

Risk of CVD in Cancer Survivors

Due to the increased number of cancer survivors, an ageing population, and potentially cardiotoxic cancer therapeutics, CVD is emerging as a significant competing risk; awareness by both providers and patients is vital. Individual cardiovascular risk factors like hypertension in a cancer survivor appear to carry greater risk than hypertension in an individual without a history of cancer, likely due in part to exposure at an earlier decade of life. Additionally, each additional risk factor found in a cancer survivor appears to increase CVD risk to a greater magnitude than a simple additive effect.18 Cancer survivors experience an increased risk of CVD morbidity and mortality in all age groups and are more likely to have traditional cardiovascular risk factors compared with age-matched controls.25,26 The Ontario Cancer Registry evaluated 98,999 women with early-stage breast cancer and found that 10-year CVD death risk was greater than cancer death risk in individuals with a history of CVD and in women who were 66 years or older who survived 5 years or more after diagnosis of breast cancer.27 This was confirmed in 34,489 5-year survivors of childhood cancer in Great Britain for whom the excess number of deaths from CVD exceeded deaths from cancer after the age of 60.28

Risk of Cancer in Individuals With CVD

The majority of prospective cardiovascular cohort studies were not designed to track time to cancer diagnosis or adjudicate cancer incidence/mortality; however, new data are emerging that show that this risk may be bidirectional. A recent prospective study involving 1,081 patients after an MI found that individuals who developed HF after a first MI have an increased risk of cancer (predominantly digestive and respiratory cancers) compared with patients with an MI but without subsequent HF (adjusted HR 1.92, 95% CI, 1.11-3.11).29 These results have been corroborated in a large national Danish registry of 9,307 outpatients with verified HF found to have increased risk of cancer persisting beyond the first year of HF diagnosis and associated with a worse prognosis compared with patients with cancer but without HF.30 As biological mechanisms continue to be elucidated, it is imperative that aggressive risk factor modification be continued for secondary CVD prevention and potentially primary cancer prevention as well.

AHA's Life's Simple 7 for CVD and Cancer: The Whole Appears to be Greater Than the Sum of its Parts

Ideal cardiovascular health is a well-supported concept in the literature and part of the AHA's 2020 strategic impact goal for improving the cardiovascular health of all Americans by 20% and reducing death from CVD and stroke by 20%. Life's Simple 7 highlights these important metrics to be tracked (Table 1). These 7 metrics, plus alcohol consumption, also cover the major modifiable risk factors shared between cancer and CVD described above. The Cancer Prevention Study-II Nutrition Cohort involved 111,966 nonsmoking men and women and detailed cancer prevention guidelines on several lifestyle factors (BMI, physical activity, diet, and alcohol consumption). During 14 years of follow-up, adherence to a greater number of target lifestyle metrics was associated with lower risk of death from both cancer and CVD causes.31 The Nurse's Health Study included 77,782 US health professionals over 24 years and analyzed 5 adverse lifestyle factors (smoking, being overweight, physical inactivity, low diet-quality score, and alcohol intake); adherence to healthy lifestyle patterns were associated with markedly lower mortality from CVD and cancer.32 More recently, adherence to the AHA's Life's Simple 7 health metrics has been associated with lower cancer incidence in several diverse prospective cohort studies.33,34 Given the complex bidirectional relationship between cancer and CVD and the multiplicative risk that appears to occur with each additional shared risk factor (Figure 1), the best strategy is the promotion of ideal cardiovascular health patterns to achieve both CVD and cancer benefits. 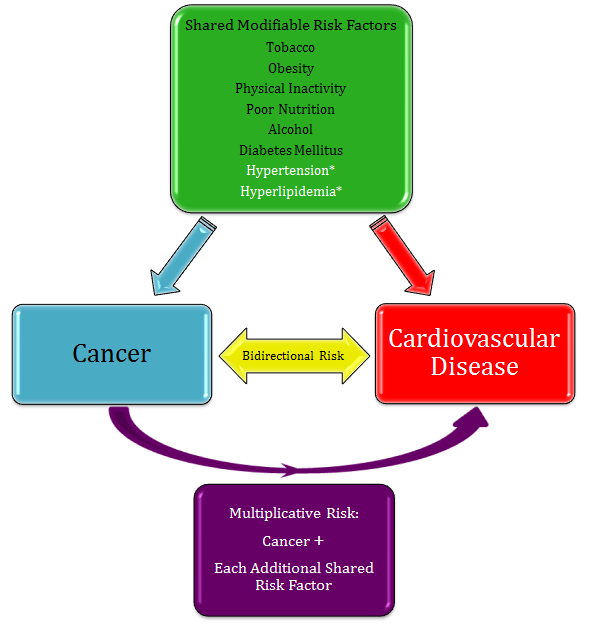 Shared modifiable risk factors can lead to both cancer and CVD. Cancer survivors are at increased risk of CVD. Conversely, individuals with CVD appear to be at increased risk for cancer. In individuals with a history of cancer, each additional shared risk factor appears to enhance CVD risk above that expected in a simple additive way. *Hypertension and Hyperlipidemia are without strong evidence for a direct causal link with cancer, but both are prevalent in cancer survivors and are associated with worse CVD outcomes at a greater magnitude than observed in individuals without cancer.

YOU ARE HERE: Home > Latest in Cardiology > Shared Modifiable Risk Factors Between Cancer and CVD