A Practical Approach to Contrast Echocardiography

Contrast echocardiography refers to diagnostic ultrasound of the heart that is performed in conjunction with any acoustically active particle, including agitated saline. This mini-review will focus primarily on procedures performed with the administration of stable, commercially produced ultrasound contrast that can transit to the systemic circulation after intravenous injection with the overall goal of producing opacification of the blood pool and the microcirculation. Over the past decade, there has been a year-by-year increase in the performance of contrast echocardiography. This pattern is attributable to increased recognition outside of major academic centers that diagnostic performance of echocardiography is improved by adoption of policies for using contrast in selected patients, and that contrast material is both safe and without significant financial penalty. Yet penetration of the technology is still low, at around 7% of transthoracic studies, which reflects a need for better understanding of technical components, clinical applications, and workflow issues. Those are the focus of this review.

The rationale for using microbubbles as ultrasound contrast agents is based on their ability to undergo volumetric oscillation, termed stable cavitation, in the pressure fluctuations in an ultrasound field. Producing opacification with an intravenous route of injection relies on microbubbles remaining intact and acoustically active after their transit from the venous to systemic circulation. This property has been achieved through specific compositional designs that stabilize and control the size of microbubbles.1,2 Compositional details for the agents approved for contrast echocardiography by the US Food and Drug Administration (FDA) and other regulatory bodies outside of the United States for opacification of the heart chambers are presented in Figure 1. The use of inert gases (perfluorocarbons and sulfur hexafluoride) with lower solubility and diffusivity than air markedly increases their lifespan after injection. Stability is further enhanced by encapsulation of microbubbles with lipid or protein shells, which acts as a barrier to reduce outward diffusion of the gas and reduces microbubble surface tension. These modifications are also important factors for the manufacture of stable microbubbles that are small enough to pass unimpeded through the pulmonary or systemic microcirculations (<6 mcm) and, in some cases, have long shelf life. 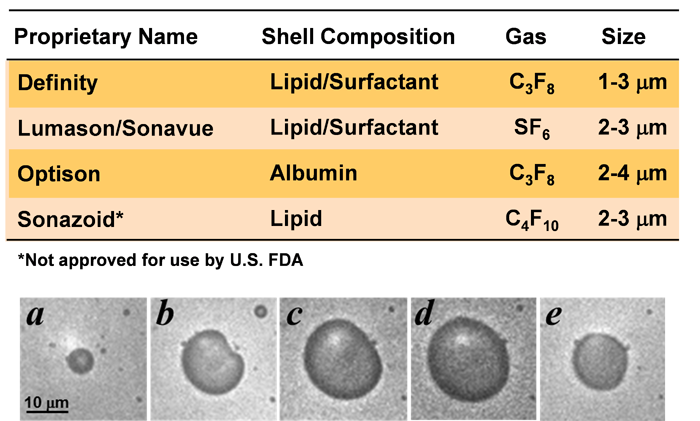 Characteristics of microbubble contrast agents approved for use in humans in the United States, Europe, or Asia for enhancement of blood pool during echocardiography (top) and images (a-e) illustrating volumetric oscillation of a lipid-shelled microbubble in an ultrasound field with compression during high pressure and expansion during low-pressure phases. Images provided by N De Jong, Erasmus University.

With regard to workflow, some of the agents require reconstitution of a lyophilized product, and others require devices to activate the agent through physical agitation. Most agents are stable and can be used for several hours after reconstitution or activation. Contrast agents can be administered intravenously by one of two approaches. Repeated bolus injection has the advantages of ease of use. However, far-field attenuation from excessive blood pool concentration often occurs early after injection, and blood pool concentration is not stable over time, which is a requirement for off-label perfusion imaging. Continuous venous infusion with a small pump is an approach that requires slightly more set-up time, but it results in a more reproducible and constant concentration of microbubbles in the blood pool and allows uninterrupted imaging.

Because microbubbles are sufficiently small for trans-capillary transit and have been composed with inert gases and shell materials that are biocompatible, they are generally considered to be among the safest of all imaging contrast agents. However, these particles are recognized as foreign by blood proteins such as serum complement.3 Accordingly, serious cardiopulmonary reaction due to non-Ig E-related pseudoanaphylaxis occurs in approximately 1 in every 10 thousand patients receiving lipid-shelled ultrasound contrast agents.4 The only major contraindication to the use of ultrasound contrast agents that are FDA-approved is previous hypersensitivity. Other contraindications for some but not all agents include right-to-left shunts and allergy to blood products. Contrast is both safe and effective in patients who have left ventricular (LV) assist and extracorporeal membrane oxygenation devices.

Clinical Use of Contrast Echocardiography

Despite continued improvements in non-contrast echocardiography, that image quality is still suboptimal for assessing regional and segmental wall motion in up to 20% of patients. Overcoming "technically difficult" studies is of importance based the increasing use of echocardiography to guide urgent treatment decisions in critically ill patients or for making guideline-based treatment decisions such as in device therapy (implantable cardioverter-defibrillator or bi-ventricular pacemaker), timing of valve surgery, or monitoring cardiotoxic drug effects.

The use of contrast for LV opacification (LVO) provides a valuable option for improving endocardial border resolution in these patients (Videos 1A-B). By more clearly defining the endocardial border, LVO improves accuracy and reproducibility in the assessment of LV volumes and LV ejection fraction, particularly in those with lower quality non-contrast images.5-7 Contrast has also been shown to reduce overall costs of echocardiography in select populations by avoiding the need for other, more expensive methods for assessing LV function (Figure 2).7

Pre-contrast (A) and post-contrast (B) images acquired from an apical 4-chamber view illustrating better ability to detect an apical wall motion abnormality. 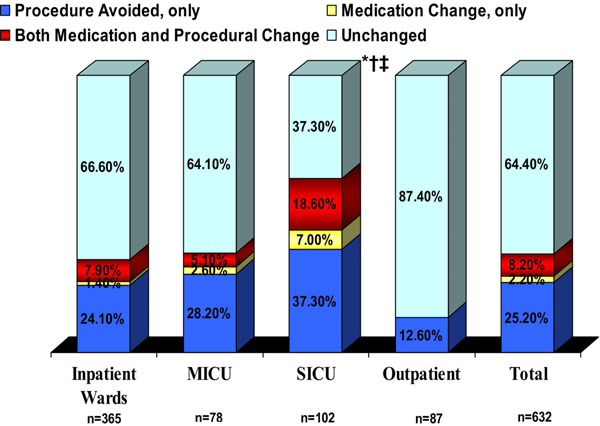 Clinical impact of the use of contrast during echocardiography on patient management in a variety of inpatient and outpatient settings. The data do not reflect total impact because lack of any change in management does not necessarily indicate lack of impact. MICU = medical intensive care unit; SICU = surgical intensive care unit. Reproduced with permission from Kurt M et al.7
* p < 0.0001 vs. Inpatient Ward
† p < 0.0001 vs. Outpatients
‡ p = 0.0004 vs. MICU

The ability to accurately evaluate contractile response in every segment and to have a high level of reader confidence are critical issues in stress echocardiography and when resting echocardiography is used to evaluate for ischemia in a patient with resting chest pain. Accordingly, LVO plays an important role in stress echocardiography where microbubble contrast can increase the number of interpretable myocardial segments at rest and during stress and reduce the percentage of studies that are technically limited in quality.8,9 Contrast echocardiography has also been used in several specific clinical scenarios in which delineation of intracavitary anatomy is important.2 Examples include evaluating for thrombus, ventricular pseudoaneurysm, non-compaction, apical hypertrophic cardiomyopathy, and eosinophilic cardiomyopathy (Videos 2A-B). Myocardial contrast echocardiography refers to the detection of contrast material present within the myocardial microcirculation. Quantitative myocardial contrast echocardiography, which relies on kinetic modeling of contrast in the microcirculation, has been used for a variety of applications in ischemic and non-ischemic heart disease. This topic has been reviewed elsewhere and is not included in this brief review.1,10

Pre-contrast (A) and post-contrast (B) images acquired from an apical 4-chamber view illustrating a thrombus at the LV apex that is not readily identified on the technically "adequate" non-contrast study.

The positive impact that contrast has been shown to have on diagnostic accuracy, cost, reproducibility, and reader confidence in a wide variety of situations has led to practice guidelines from the American Society of Echocardiography regarding its use.2 However, specific recommendations for selecting patients in whom contrast should be used have been based simply on the inability to visualize a certain number of myocardial segments. In clinical practice, it is often important to consider the clinical circumstance when deciding on the impact of contrast. For example, contrast may have little role when the primary aim is to evaluate for the presence of a pericardial effusion. On the other hand, issues of reliability, reproducibility, accuracy, and confidence can justify the use of contrast in situations when image quality is adequate but marginal, such as the need to detect a regional wall motion abnormality or exclude an apical thrombus.

The American Society of Echocardiography guidelines on contrast echocardiography provide a detailed description of policies that must be implemented regarding contrast use and the roles of different healthcare providers in this process.2 There are several important features. An echocardiography laboratory must possess imaging systems with the specific ultrasound detection algorithms that have been developed for enhancing contrast signal based on their ability to generate non-linear signals.1 Personnel must be trained on how to optimize systems for contrast use because interactions between microbubbles and ultrasound are complex. It is also important that quality assurance policies are in place to ensure safety, quality, and efficiency. Ideally, the decision to use contrast should reside with the individual who is acquiring images, most commonly the sonographers, which is a policy that is achievable only in an environment where there is active feedback between sonographers and interpreting physicians. Institutional policies vary regarding the need for written consent and who is allowed to administer contrast. However, efficiency of implantation is optimal when written consent is not required and contrast is considered to be inherent in the practice of echocardiography.

Contrast echocardiography is now considered an essential component for a modern echocardiography laboratory based on its ability to provide unique information that enhances diagnostic performance and reader confidence. The implementation of contrast requires knowledge of contrast-specific imaging protocols, a process for identifying patients who are likely to benefit from contrast, and sound laboratory policies that ensure quality, efficiency, and safety.

YOU ARE HERE: Home > Latest in Cardiology > A Practical Approach to Contrast Echocardiography