Catecholaminergic polymorphic ventricular tachycardia (CPVT) is uncommon but recognized as a cause of sudden cardiac death (SCD) in those with structurally normal hearts. It typically presents with palpitations or syncope during intense physical or emotional stress and may be fatal. Genetic advances in the last decade have allowed for improved diagnosis, risk stratification, and treatment of this disorder. Given the association to intense physical activity, CPVT deserves special consideration in athletes participating in competitive sports.

The incidence of SCD in young competitive athletes is relatively low (1:42,000-200,000 athletes) and is more commonly related to cardiac structural abnormalities such as hypertrophic cardiomyopathy (HCM) and coronary anomalies.1,2 Contrary to previous belief, a recent study found that the most cause of SCD at autopsy was autopsy-negative sudden unexplained death (ANSUD) (25%) followed by HCM (8%). It is thought that the cause of ANSUD is likely due to unrecognized channelopathies.3,4 CPVT is an uncommon condition, accounting for about 12% of autopsy-negative sudden deaths and 1.5% of sudden infant deaths.5 The true prevalence is unknown, though a possible prevalence of 1 in 10,000 has been quoted in the literature.6 There is ongoing controversy regarding the optimal screening and prevention of SCD in athletes. Athletic screening programs are likely to be helped by advances in genetics, novel antiarrhythmic drug strategies, and the management of athletes with implantable cardioverter-defibrillators (ICD).7,8 Currently, athletes with CPVT are advised physical activity cessation and disqualification from nearly all competitive sports.9 The risk of SCD as well as disqualification from sports participation is devastating and has significant impact on quality of life for patients and their families. In the last decade, genetic testing and our understanding of the mechanisms of arrhythmogenesis has significantly improved, novel antiarrhythmic drug strategies have emerged, more epidemiological experience with athletes with inherited channelopathies is available, surveillance of asymptomatic mutation carriers has evolved, and experience with athletes with ICDs has expanded. These factors will likely change our management of athletes with the diagnosis of CPVT.

CPVT is a highly malignant inheritable cardiac channelopathy. CPVT was originally described by Coumel et al. in 1978 and later further characterized by Leenhardt et al. in 1995 as a distinct genetic arrhythmogenesis disorder of unknown origin in individuals without structural heart disease and QT prolongation.10,11 Affected individuals often present in childhood or adolescence with symptoms such as syncope or catecholamine-mediated ventricular arrhythmias that may result in cardiac arrest and sudden death. The untreated mortality rate as high as 50%.12-14

Based on the early genetic studies, the electrocardiographic pattern of ventricular tachycardia in this disorder closely resembles that of arrhythmias associated with calcium overload and delayed afterdepolarizations observed in digitalis toxicity.15,16 More specifically, missense mutations involving the human cardiac ryanodine receptor 2 gene (hRyR2) mapped to chromosome 1q42-q43 may be associated with CPVT, with an autosomal dominant pattern of inheritance.17 Priori et al. specifically showed that CPVT is a clinically and genetically heterogeneous disease presenting beyond the pediatric age with a spectrum of polymorphic arrhythmias.5 Probands identified as genotype positive for the RYR2 mutation often present with symptoms earlier with males having a higher risk of cardiac events. Nongenotyped CPVT probands are predominantly women and present later in life. Lahat et al. also identified a missense mutation involving the calsequestrin 2 gene (CASQ2) responsible for the autosomal recessive form.18

CPVT is widely accepted to be a disease of childhood, with most patients presenting with symptoms (syncope or SCD) before the age of 21, with a median age of 15±10 years (range 2 to 51 years).12,13 The incidence of cardiac events (syncope under physical or emotional stress, aborted cardiac arrest, appropriate ICD discharges, or SCD) during 4- and 8- year follow-up was 12% and 32% respectively. In other studies, the occurrence of cardiac events varied from 2% to 62% of the patients.13,19

More recently, a bimodal distribution of symptom onset has been highlighted, with a juvenile type presenting in the first two decades of life and the adult type of CPVT presenting at 32-48 years.15,20 The adult form tends to present around the age of 40 years, have a female predominance, usually RYR2-genotype negative, and associated with less risk of SCD. Further, Priori et al. showed that variable expressivity of RYR2 mutations was seen in 17% of gene carriers.15 These patients were phenotype negative for CPVT as well as other inherited arrhythmogenic diseases suggesting that RYR2 CPVT has incomplete penetrance.

CPVT patients usually have a normal resting ECG. The delay between initial presentation and diagnosis is often between 2 to 9 years.12,21 A high index of suspicion for CPVT should be held in patients with palpitations or syncope during physical or emotional stress, especially in those who have a family history of premature death.

The diagnosis of CPVT relies on the demonstration of ventricular arrhythmias (VA) during standard noninvasive exercise treadmill testing and epinephrine drug challenge. A positive test is defined when complex ventricular ectopy, bidirectional ventricular tachycardia (VT), and/or polymorphic VT occurs (Figure 1). A negative stress test, however, does not exclude CPVT. Several studies have shown that VA provoked with exercise range from 30%-76% and epinephrine in 82% of patients with CPVT.22,23 The epinephrine drug challenge may be considered as an alternative to exercise treadmill testing, with sensitivity and specificity of 28% and 98% respectively.24 Holter monitoring, loop recorder monitoring and implanted loop recorders may be useful in this case when exercise testing or drug challenge is either negative or cannot be performed. Genetic testing and family screening should then be performed in affected individuals and asymptomatic genotype positive family members should be treated with β-blockers. 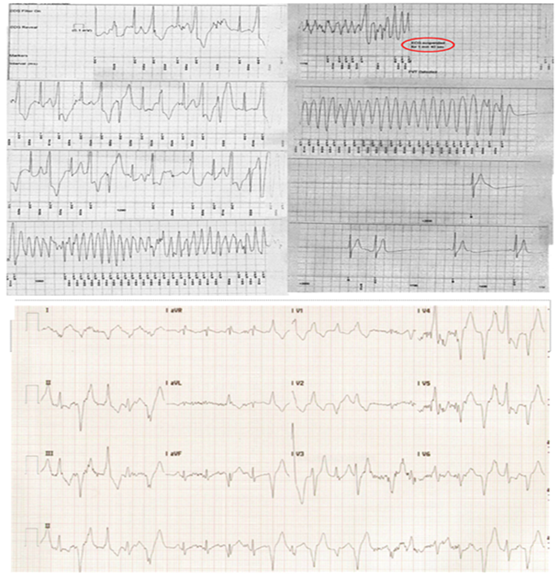 β-blockers remain the drug of choice in the treatment and prevention of VA. Their efficacy is modest and may vary with cardio-selective versus non-selective β-blockers, dosage and compliance.13,25,26 Ca2+ channel blockers (CCB), often used in combination therapy with β-blockers, also reduce exercise induced VA.27 Flecainide, a class IC antiarrhythmic sodium channel blocker, has also been studied and shown to reduce VA and defibrillator-induced VT storm in patients refractory to β -blockers and CCB therapy.28 ICD placement currently is a class IIa recommendation for patients with CPVT who have syncope and/or documented sustained VA while receiving β -blockers.29 However, ICD therapies may heighten the catecholamine response resulting in inappropriate shocks and electrical storm in 22% and 18% of cases respectively.12 In patients who are symptomatic despite high dose β -blockers, intolerant or refractory to drug therapy and or electrical storm, left cardiac sympathetic denervation may be required and has been shown to reduce VA with 1- and 2-year event free survival rates of 87% and 81% respectively.30

Despite strict contemporary guidelines, not all athletes choose to follow these recommendations. Recent data has shown that LQTS patients on a comprehensive treatment program have low risk of events even with continued sports participation. There is emerging data that this may also hold true in CPVT. Currently as outlined by the recent 36th Bethesda Conference (2005) and 2015 AHA/ACC Eligibility and Disqualification Recommendations, an athlete with previously symptomatic CPVT or asymptomatic CPVT with exercise-induced VA, participation in competitive sports is not recommended (except for class 1A sports).31,32 Non participation is potentially devastating for an athlete and the risks should be carefully discussed with the patient and family. Exceptions to this limitation should be made only after consultation with a CPVT specialist. In a recent study of 63 CPVT patients older than 6 years on good medical therapy, 21 patients were identified as athletes at the start of the study who continued to compete during follow up. Compared to patients in the nonathlete group, there was no difference in event rates including death.33

The current recommendation for undiagnosed and untreated CPVT patients is to refrain from all except class 1A sports. There is currently insufficient evidence to allow participation in asymptomatic treated CPVT patients, but the risk in the patients may be lower than previously thought. The decision for patients to compete in sports is complex and should involve the participation of the patient, family members, coaches, and electrophysiologists.

YOU ARE HERE: Home > Latest in Cardiology > The Athlete With Catecholaminergic Polymorphic Ventricular Tachycardia