A Brief Review of Troponin Testing for Clinicians

Current American College of Cardiology and American Heart Association guidelines state that troponin is the preferred biomarker for diagnosing acute myocardial infarction (MI).1 Troponin T (TnT) and I molecules have amino acid sequences that are found only in cardiac tissue, making their assays highly specific for detecting cardiac damage.2 Over the years, as troponin assays have become more analytically sensitive and precise, clinicians have struggled with frequent "false positive" test results, defined as elevated troponin not representing MI. Now as newer troponin assays with even higher analytical sensitivity than previous assays are becoming available in the United States,3 many clinicians may be wondering if a higher analytical sensitivity test will create even more false positive test results. This concern, however, is unwarranted and is based on several misconceptions. In fact, newer troponin assays represent a significant improvement in laboratory testing, and if used properly will enhance clinicians' ability to rapidly diagnose patients with suspected acute coronary syndromes (ACS). These issues were addressed in our recent review article "Troponin Testing for Clinicians"4 and are briefly reviewed here.

The term high-sensitivity troponin is a source of confusion for clinicians. In the context of troponin testing, it is important to understand that high-sensitivity refers to analytical sensitivity and not clinical sensitivity. Clinicians use the terms sensitivity and specificity to describe the operating characteristics of a clinical test.5 They are taught that sensitivity and specificity vary depending on where investigators draw the line of demarcation between positive and negative test results (Figure 1, right panel). Generally, increasing the sensitivity of a test decreases the specificity. For troponin assays, however, high-sensitivity means that the assays have much lower limits of detection, enabling quantification of troponin at levels that were undetectable with earlier assays. Importantly, lowering the limits of detection for an assay may have no effect on the 99th percentile cut-point that determines the upper limit of the normal range. In fact, the 99th percentile cut-point for the newest high-sensitivity TnT assay is 0.014 ng/ml, which is very similar to the 0.01 ng/ml cut-point for the prior fourth generation TnT assay.3

The 99th percentile is another source of confusion. There are two common ways of determining a cut-point for a diagnostic test (Figure 1). The left panel shows a method using test measurements in a group of presumably normal subjects. With this method, the inner 95th percentile of a distribution of healthy subjects is used to define the normal range of a test. The right panel shows an alternative method using test measurements in groups of subjects in a clinical setting who are defined as having disease or no disease by another "gold standard" test. Generally, there is overlap between distributions of test results for subjects with and without disease. A line of demarcation is drawn at a point that maximizes the sensitivity and specificity of the test, often by using a receiver operating characteristic (ROC) curve method to help determine the optimal cut-point. For troponin testing, this ROC curve method was initially used to determine the cut-point using creatine kinase-MB to define MI. Investigators noted, however, that detectable troponin levels lower than the ROC curve-determined cut-point also portended a poor prognosis, as depicted by the gray area in Figure 2.6-9 Therefore, in 1999, an international panel of experts decided to use the former method of determining upper limit of normal, but they decided to use the 99th percentile rather than the 95th percentile as a cut-point.10 As troponin assays improved, the assays have become more precise and less subject to random or analytical variation, causing the shape of the distribution curve for a normal population to narrow, which has moved the 99th percentile to a lower cut-point (Figure 3). 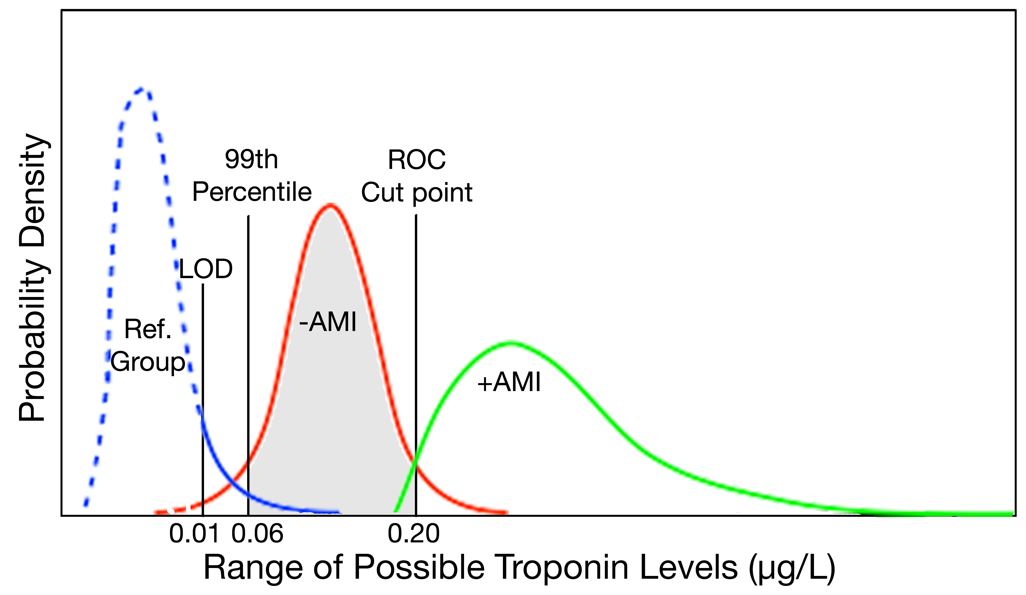 Figure 4 shows a distribution of troponin results for a normal population using the fourth generation TnT assay on the left and the newer generation high-sensitivity assay on the right. With the fourth generation TnT assay, most people would have undetectable troponin levels, as shown by the dashed curve of a presumably normal distribution. With the newer assay, troponin would be detected at lower limits of detection, as shown by the solid portion of the blue curve in the right panel. The 99th percentile reported for the newer TnT assay is essentially the same as for the older assay, suggesting that the presumed shape of the distribution curves for the two assays is similar, as shown schematically in the figure. 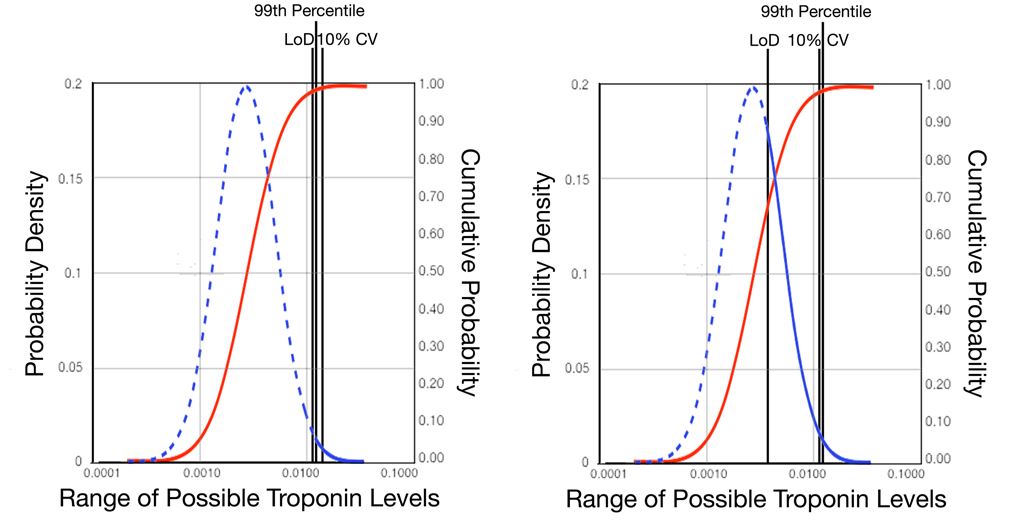 Most of the false positive test results that have frustrated clinicians are not the fault of the assay, and newer assays would not be expected to make this problem worse. The high false positive rate for troponin testing is largely due to indiscriminate ordering practices, which has created a problem known as spectrum bias. Troponin can be elevated in a variety of chronic conditions, such as renal failure or heart failure, or acute conditions, such as sepsis. When troponin is ordered in a narrowly defined population of patients who have a suspected ACS, excluding patients with renal disease or sepsis, the sensitivity of troponin is about 95%, and the specificity is about 80%.11 In Figure 5, the left panel shows a distribution of troponin test results for a hypothetical population for which the test is ordered in a narrow spectrum of patients that excludes renal failure and sepsis. When ordered indiscriminately in a broader spectrum of patients, however, the distribution curve of troponin test results widens for the patients without ACS. Because the cut-point remains fixed, the line of demarcation crosses the cumulative distribution curve at a lower point, indicating a markedly lower specificity or true negative rate. The right panel of Figure 4 shows a distribution of troponin test results for which the test was ordered indiscriminately in a broader spectrum of patients. As shown schematically, the cumulative probability curve (TNR) crosses the line of demarcation at a lower point, indicating a much lower clinical specificity. Thus, the deficiencies of troponin testing are largely a problem with clinical reasoning related to indiscriminate ordering practices and not a problem with analytical imprecision.

Newer high-sensitivity troponin assays have been available in Europe for years, and investigators there have proposed new ways of interpreting troponin test results.12 Some investigators have proposed using two cut-points: one at a high level to identify patients with ACS with a fairly high specificity and another cut-point at a very low level to identify patients without ACS with a fairly high sensitivity. Patients with troponin levels between the two cut-points would require further observation, and the high and low cut-points would enable early rule-in and rule-out strategies for many emergency department patients. This strategy is analogous to how we currently use electrocardiograms in the emergency department. Patients with ST elevation (analogous to a high cut-point) are sent for coronary intervention, while patients with normal or near-normal electrocardiograms (analogous to a low cut-point) are triaged to low-risk treatment strategies, and patients with in-between electrocardiographic findings are observed and receive additional testing.13

A single troponin test using a very low cut-point may be sufficient for ruling out an ACS in patients presenting with prolonged chest pain. For patients with chest pain of shorter duration, a single test at time zero may be too insensitive, and a second test 1 hour later has been proposed to improve the clinical sensitivity. If the second troponin level is higher than the first (even though both are below the 99th percentile cut-point), the delta could be used as a rapid and sensitive indicator of an ACS. Further investigation is needed to determine the best strategies for rapid diagnosis using the newer troponin assays.

In summary, the newer troponin assays are a marvel of modern medicine. Refinements in troponin assays now demand refinements in our clinical reasoning. Newer assays with improved analytical sensitivity will not likely alter the false positive rate. Improving the specificity of troponin testing (decreasing the false positive rate) can be addressed only by implementing better test-ordering protocols. Improved analytical sensitivity of the newer assays will enable more rapid and more effective rule-in and rule-out strategies. Now that the newer, more analytically sensitive troponin assays are available in the United States, clinicians will need to rethink how they order and interpret troponin tests. Greater understanding of the assay's operating characteristics could lead to more appropriate ordering practices and improved diagnostic accuracy for patients presenting with suspected acute MI.

YOU ARE HERE: Home > Latest in Cardiology > A Brief Review of Troponin Testing for Clinicians