Unravelling the Enigma of MI With Nonobstructive Coronary Arteries

Myocardial infarction with nonobstructive coronary arteries (MINOCA) is the term currently used to describe patients presenting with clinical features of an acute myocardial infarct (MI) but without evidence of obstructive coronary artery disease (CAD) on coronary angiography, so that the immediate cause for the clinical presentation is not evident.1 Although this enigmatic conundrum has been evident for more than 75 years,2 the term MINOCA has only recently been introduced,3 prompting intensified clinical interest. The contemporary diagnostic criteria for this syndrome have been defined1 and are summarised in Figure 1. 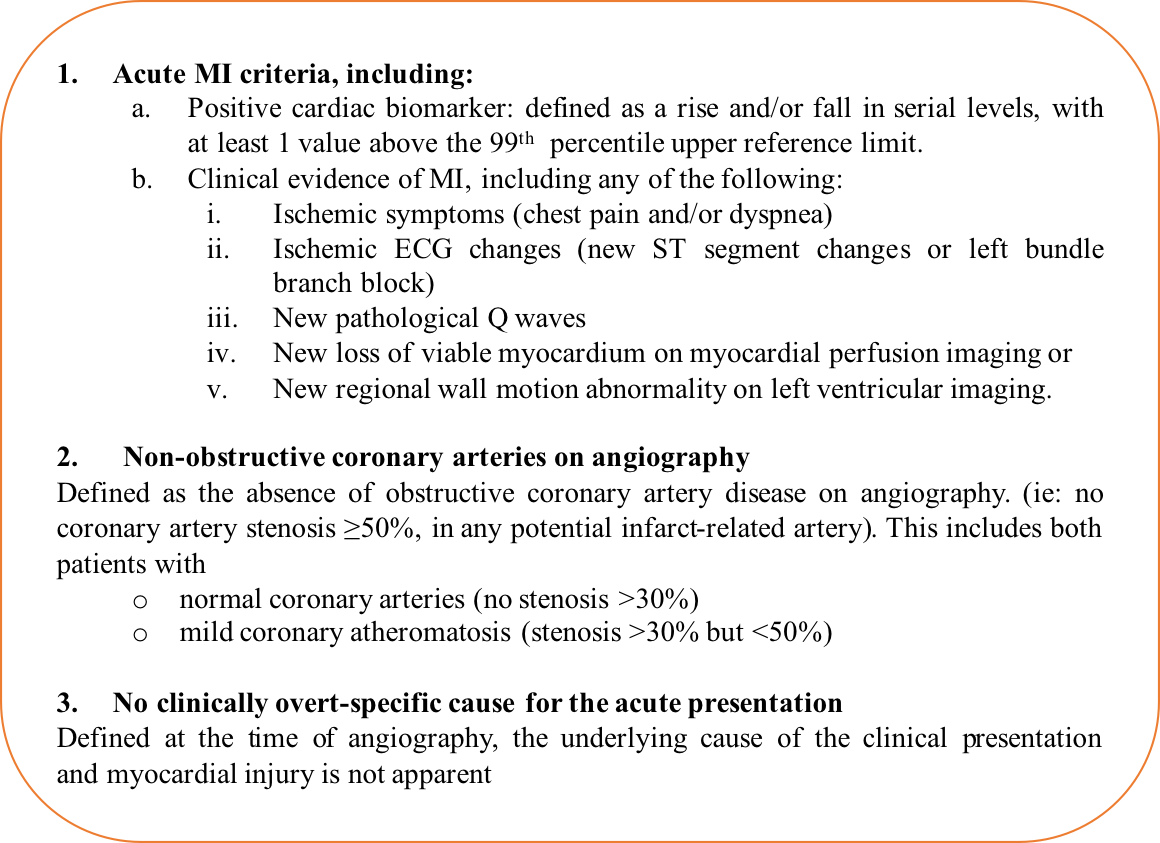 A systematic review of the MINOCA literature reported a prevalence of 1-14% (mean = 6%, 95% confidence interval: 5%, 7%) (Figure 2) in patients with acute MI.4 The variation in prevalence of MINOCA can be explained by the disparity in data collection methods and definitions used. With the current widespread use of coronary angiography, availability of more sensitive myocardial injury biomarkers, and availability of large acute MI clinical registries, the prevalence of MINOCA is more likely 11-14%.5-7

In a systematic review of MINOCA studies, the median age of patients was reported as 55 years, and the percentage of women was 40%.4 Compared with patients with MI who had obstructive CAD, those with MINOCA were more likely to be younger and female and have hyperlipidemia.4 Similarly, two recent large MI registry studies reported that patients with MINOCA were more likely to be female and in their mid-60s and to present with a non-ST-segment elevation MI.5,6 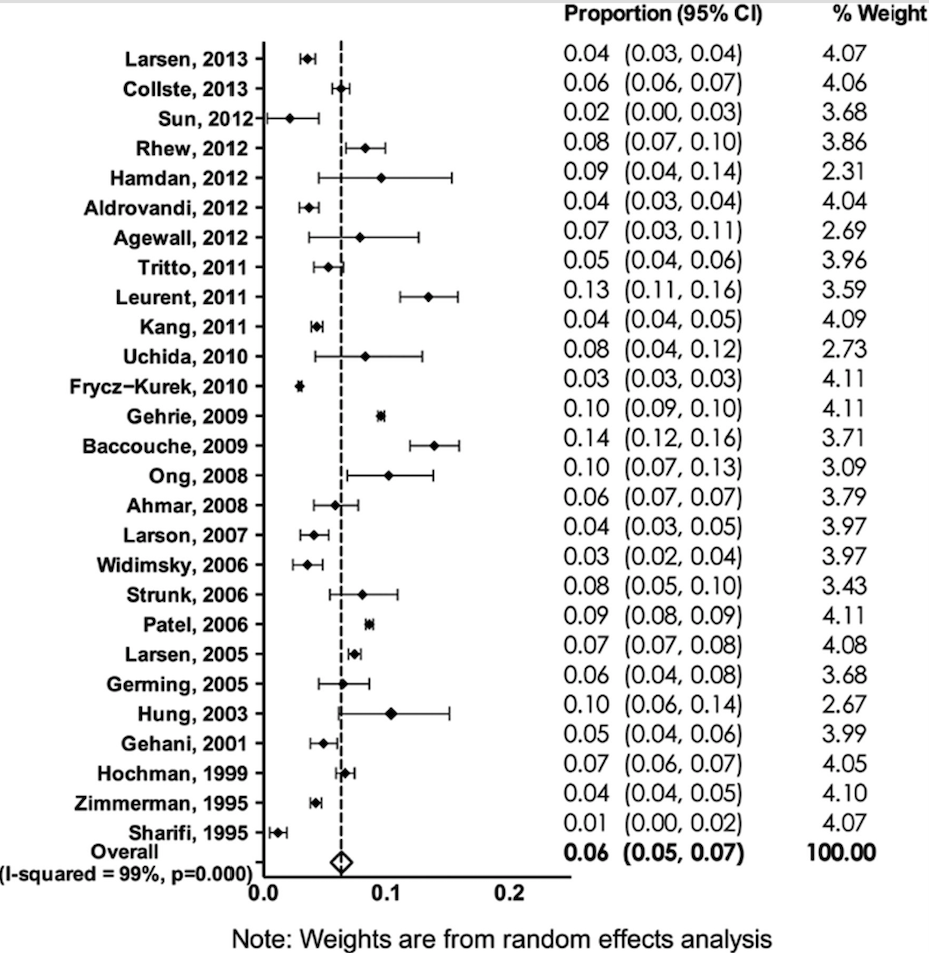 It is well-established that MINOCA is a heterogeneous entity with various pathophysiological mechanisms responsible for the acute presentation. These mechanisms may involve coronary or noncoronary pathological conditions, with the later including myocardial disorders (Figure 3).8 The relative contribution of these pathophysiological mechanisms in patients with MINOCA has not been systematically evaluated because it requires multiple innvestigations, including coronary haemodynamic testing. However, cardiac magnetic resonance imaging (CMR) is a useful preliminary investigation that assists in delineating some of the common causes of MINOCA. These CMR studies have reported a typical MI in only 24% of patients with MINOCA, with myocarditis occurring in 33% and no significant abnormality in 26%. Other studies utilizing specific investigations of an underlying cause have reported inducible coronary artery spasm in 27% and thrombophilia abnormalities in 14% of patients with MINOCA. 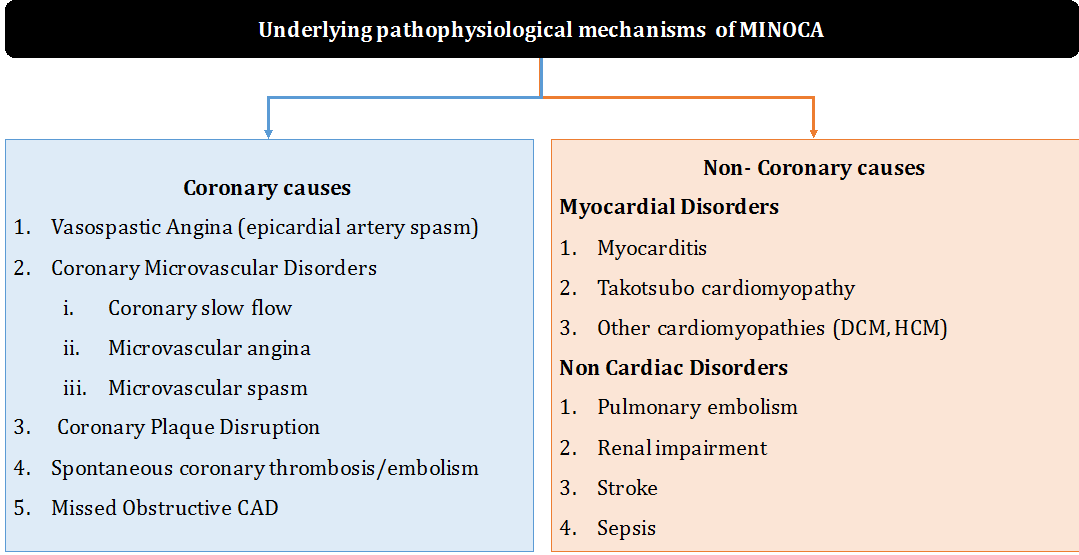 Vasospastic angina is a clinical disorder manifest by myocardial ischemia attributable to epicardial coronary artery spasm, which may result in acute MI.9 The reported prevalence of coronary spasm varies across ethnic populations and is particularly prevalent among Asian patients. In patients with MINOCA, inducible coronary spasm has been reported in 81% of Japanese, 61% of Korean, and 15% of French patients.4 The diagnosis of vasospastic angina is especially important because this disorder is associated with significant morbidity and mortality that can be prevented with the use of calcium channel blockers.9 Moreover, the diagnosis of this disorder frequently requires the use of provocative spasm testing10 because documentation of a spontaneous episode of coronary spasm is uncommon and thus should be considered in patients with MINOCA.1

Several observations implicate coronary microvascular dysfunction in the pathogenesis of MINOCA. First, patients with suspected ischemia and no obstructive CAD have an increased risk of major adverse cardiac events, including MI.11 Second, patients with the coronary slow flow phenomenon, an angiographic marker of increased microvascular resistance, frequently present with an acute coronary syndrome.12 Third, in women with ischemia and no obstructive CAD, the coronary flow reserve is a predictor of major adverse cardiac events.13 Further studies are required to document the prevalence of coronary microvascular dysfunction in patients with MINOCA.

Plaque disruption is an encompassing term that includes plaque rupture, ulceration, erosion, and intraplaque hemorrhage. These pathologies are best imaged by intravascular ultrasound and optical coherence tomography. Based on the limited available literature, it is estimated that approximately 40% of MINOCA presentations are a result of plaque disruption.14,15 As expected, these intravascular ultrasound studies confirm more extensive atherosclerotic disease than evident on angiography; however, no patient with completely normal coronary angiography had plaque disruption.13 Further studies are required to investigate the pathogenetic role of plaque disruption in MINOCA.

In-situ coronary thrombosis may potentially cause coronary occlusion and thus be responsible for MINOCA. Although this may be secondary to other coronary processes such as plaque disruption, thrombi may arise spontaneously in the context of hereditary or acquired thrombotic disorders. Hereditary thrombophilia disorders associated with MINOCA include Factor V Leiden and protein S and C deficiencies. Acquired thrombophilia disorders should also be considered, such as the antiphospholipid syndrome and myeloproliferative disorders, although these have not been systematically investigated in MINOCA. Coronary emboli may occur in the context of these thrombophilia disorders or other predisposing hypercoagulable states such as atrial fibrillation and valvular heart disease.

By definition, patients with obstructive CAD should be excluded from the diagnosis of MINOCA. However, several disorders are easily missed on the initial diagnostic angiogram, which may be more evident on closer scrutiny. Spontaneous coronary artery dissection is easily missed on angiography, particularly if it is restricted to a smaller branch.16 Similarly, a flush occlusion at the origin of a secondary branch may be missed. Closer review of the angiogram may reveal a late-filling branch, confirming the occluded vessel and obstructive cause of the acute MI.

Myocarditis is the most common noncoronary cause of MINOCA, with as many as a third of cases attributable to this condition. Although many can be diagnosed by classic symptoms, the presentation may mimic an acute MI, resulting in a diagnosis of MINOCA. Routine CMR imaging in consecutive patients with MINOCA has demonstrated that as many as one-third have evidence of myocarditis.17 This underscores the utility of CMR imaging in MINOCA given the diverse management strategy between myocarditis and a true MI.

Takotsubo and Other Cardiomyopathies

Patients with takotsubo cardiomyopathy typically present with an acute coronary syndrome presentation, characterized by a transient, acute ventricular wall motion abnormality that does not conform to a conventional ischemic coronary territory. Other cardiomyopathies (hypertrophic and dialted cardiomyoapthies) may also occasionally mimic MINOCA. These can also be dileated by early CMR imaging.

Noncardiac disorders may mimic an acute MI, including pulmonary embolism, acute renal failure, sepsis, and infiltrative diseases such as amyloidosis, among others.18 Clinical review and consideration will often delineate these causes but may also require simple additional investigations such as a D-dimer for pulmonary embolism screening.

MINOCA has also been associated with significant morbidity. In a study involving 5,539 patients with acute MI (6.9% with MINOCA), Grodzinsky et al.20 demonstrated that 25% of patients with MINOCA had ongoing post-infarct angina at 12 months. This is similar to those with obstructive CAD, although the patients with MINOCA were more likely to have a poorer quality of life and less likely to be satisfied with their ongoing treatment.20

Contemporary acute MI guidelines do not specifically address the management of MINOCA. A fundamental consideration is identifying the underlying cause of this heterogeneous syndrome because that will determine appropriate therapy. CMR imaging is a key diagnostic modality in identifying the underlying cause because it is estimated to identify the cause in approximately 90% of patients with MINOCA.21 Additional investigations have been proposed in various diagnostic algorithms for MINOCA,1,22 although the relative utility of these requires further evaluation.

A recent landmark study by Lindhal et al.7 involving 9,466 consecutive patients with MINOCA demonstrated that the use of statins or angiotensin-converting enzyme inhibitors/angiotensin receptor blockers was associated with reduced major adverse cardiac events at 12 months. In addition, there was a trend in reduced events with the use of beta-blockers but no benefit observed with dual antiplatelet therapy. This observational study utilizing a propensity analysis approach is the first to demonstrate that the prognosis of patients with MINOCA can be influenced by medical therapy. These important findings underscore the importance of identifying and treating patients with MINOCA but should be supported by a randomized controlled trial. 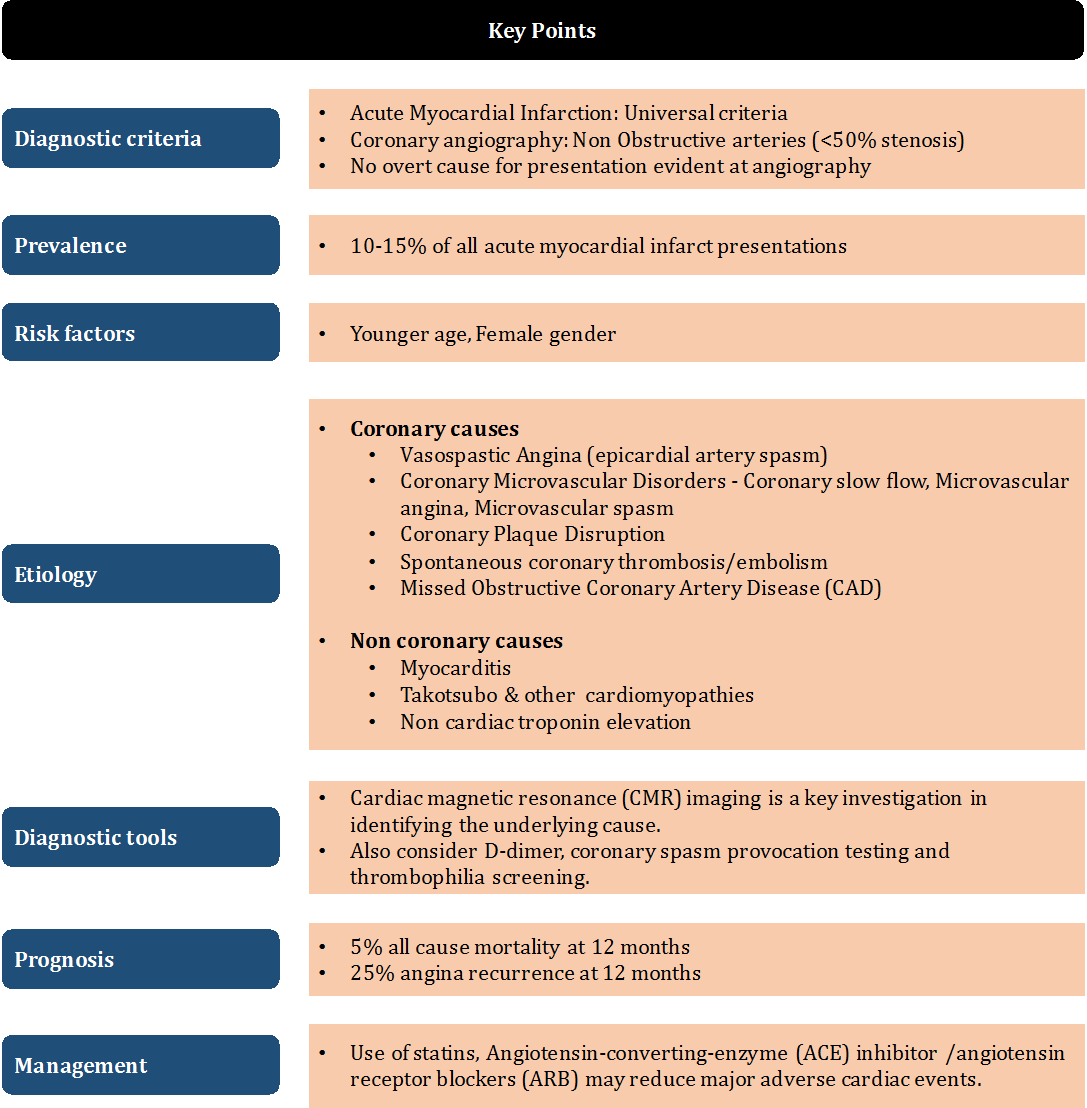 Current available literature demonstrates the importance of diagnosing and treating patients with MINOCA, although substantial knowledge gaps exist that require future research to identify optimal management. To facilitate this work, it is important to delineate ischemia-related myocardial necrosis (i.e., those attributable to coronary causes) from noncoronary disorders because some researchers utilise the term in its broadest context (i.e., both coronary and noncoronary causes), whereas others only consider its specific context (i.e., coronary causes alone). This leads to confusion within the literature; therefore, the nomenclature should be clarified. Recently, it has been proposed to introduce the term TpNOCA (Troponin-positive nonobstructive coronary arteries) to describe patients with an apparent myocardial infarct in the absence of obstructive CAD (i.e., coronary and noncoronary causes) and reserve the term MINOCA for only those who have evidence of ischemia-related myocardial necrosis.8 Thereafter, specific therapies for MINOCA could be evaluated in randomised controlled trials.

YOU ARE HERE: Home > Latest in Cardiology > Unravelling the Enigma of MI With Nonobstructive Coronary Arteries