Cardiovascular disease is the most common cause of death for both sexes.1 Although cardiac care has improved considerably for both women and men over the past decades, there are several areas in which women have benefited less than men.2-5

Among patients with acute coronary syndromes (ACS), studies have consistently shown that women are less likely than men to receive guideline-recommended therapies.2-4,6-15 There are several possible reasons for this, including

Table 1: Differences Between Women and Men in the Likelihood of Receiving Secondary Prevention After Suffering an ACS 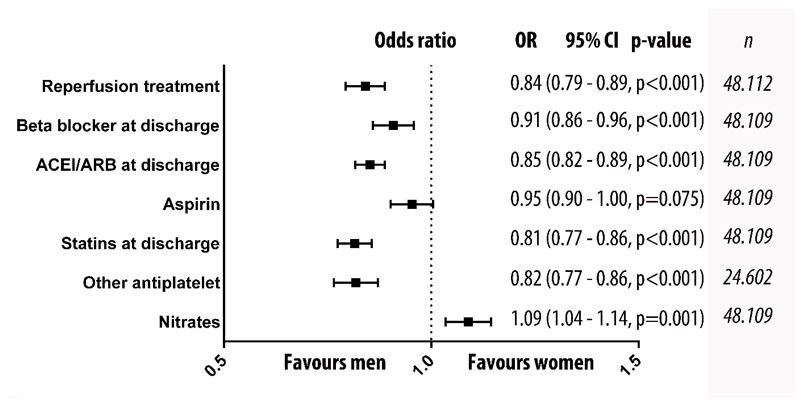 Likelihood of receiving evidence-based treatment, as assessed by logistic regression models adjusted for risk factors. Women are compared with men. P values refer to interaction between age category (or type of MI) and sex. Reprinted with permission from Redfors et al.2

There are several theories for the underlying reasons for this difference. One is that women are less likely to receive secondary prevention medications because MI has traditionally been considered a man's disease.5 Some medications may be withheld from women because the medications are perceived to be less efficacious in women than men. As an example, women with MI are less to have obstructive coronary artery disease compared with men.16 This may lead physicians to withhold therapies that they strongly associate with atheromatous coronary artery disease, such as statins and dual antiplatelet therapy; however, current guidelines for secondary prevention after ACS are based on information from trials that enrolled both men and women. These trials also did not differentiate between patients based on findings on their coronary angiogram.19,20 Most importantly, these trials have not demonstrated a differential effect in the efficacy of these therapies for women and men. Thus, until we better understand the different disease phenotypes, guideline-recommended therapies after MI should not be withheld from women.

Medications may also be withheld from women due to fear of side effects. For example, it has been suggested that statins cause debilitating myalgia more often in women than in men; however, there is compelling evidence that statin therapy is as effective at reducing serious adverse events in women as it is in men.17 There is also suggestion that female sex is a risk factor for bleeding complications after MI.2,19 In fact, current guidelines list female sex as a risk factor for bleeding complications among patients with ACS. However, because current dual antiplatelet regimens have been similarly effective at reducing the risk of adverse events among women as in men in the pivotal multicenter randomized controlled trials, it is recommended that both women and men should receive dual antiplatelet therapy after being hospitalized due to an ACS.19,20

The data reviewed herein were collected from patients who were treated at least several years ago, and even if most of the studies in Table 1 were published within the last few years, many of the patients that contributed data were treated more than a decade ago. Even the most contemporary studies reflect clinical practice as it was a few years back and not necessarily as it is today. With increasing awareness of sex disparities in cardiac care over the past decade, it is possible that the sex-related differences in the prescription of secondary prevention medications and cardiac rehabilitation have improved in recent years. On the other hand, data from the Swedish quality registries imply that sex differences in secondary prevention after MI have increased rather than decreased over the previous decades.2 It will be important to continue to track trends in sex-related disparities in secondary prevention after ACS.

In summary, compelling evidence exists that women with ACS are less likely than men to receive secondary prevention and cardiac rehabilitation. Some of these observed discrepancies are likely accounted for by differences between the sexes in disease phenotype and pathophysiology, as well as by differences in the perceived efficacy, safety, and severity of the side effects of these therapies; however, unfortunately, some of the observed discrepancies may be explained by subconscious gender bias.

YOU ARE HERE: Home > Latest in Cardiology > Women Are Less Likely to Get Secondary Prevention Medications and Cardiac Rehabilitation