Myocarditis in the Athlete

A 36-year-old competitive cyclist presents to the emergency room with central crushing chest pain, a troponin T of 0.532ng/ml (normal range 0.000-0.029) and lateral ST segment elevation on his 12 lead electrocardiogram (ECG). He is immediately brought to the cardiac catheterization laboratory for emergent left heart catheterization which reveals normal coronary arteries. He endorses recent foreign travel and symptoms of gastroenteritis in the preceding few days. A cardiac magnetic resonance (CMR) study reveals a normal ejection fraction without segmental wall motion abnormalities, but also shows sub-epicardial, lateral wall delayed gadolinium enhancement (DGE) (Figure 1). He is diagnosed with a probable viral myocarditis. Symptomatically, he recovers quickly and wishes to return as soon as possible to his sporting activity. What advice should he be given? 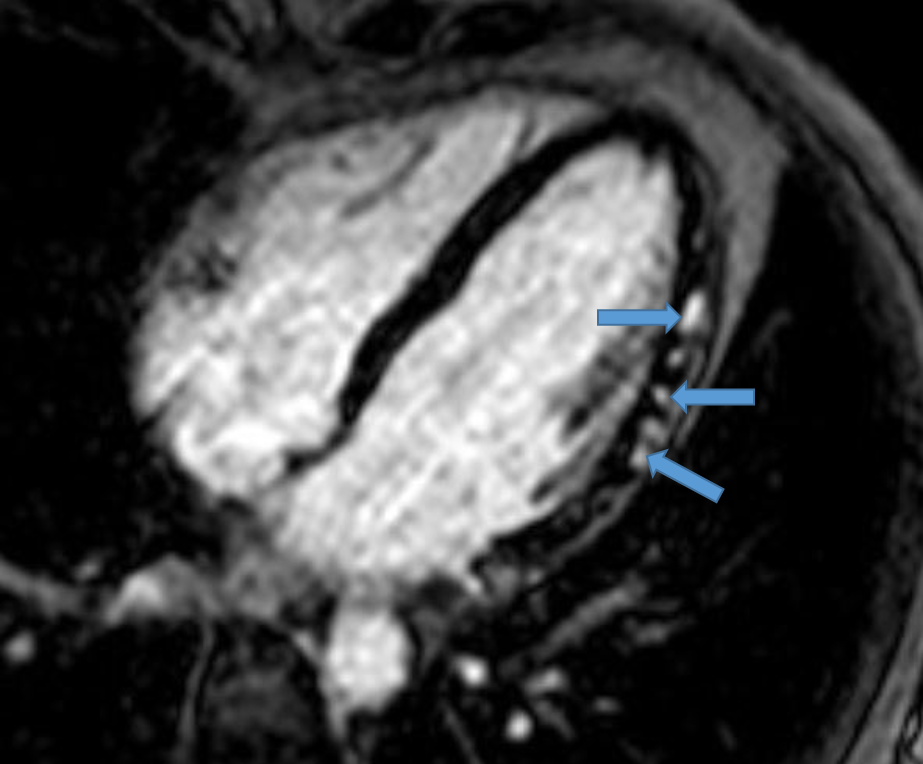 Myocarditis is a non-ischemic inflammatory heart muscle disease that can result in cardiac dysfunction and arrhythmias.1 The etiology of myocarditis is heterogeneous but can be broadly categorized into infectious, toxic or autoimmune insults. Viral myocarditis is the most common etiology in the developed world and the focus of this discussion. However, in the context of young athletes, toxins such as catecholamines and cocaine should be inquired about during history taking.2 The pathophysiology is primarily mediated through myocardial inflammatory infiltrates and necrosis.1

The diagnostic evaluation typically begins with a clinical history and physical exam. The clinical presentation can be highly variable as patients can present with chest pain, exertional dyspnea and fatigue, or overtly decompensated heart failure and/or cardiogenic shock.3-5 The initial ECG can also show variable findings including ST segment deviations, ectopy, conduction abnormalities, sustained arrhythmias or low voltages. Transthoracic echocardiography may show global left ventricular dysfunction; however, localized wall motion abnormalities with pericardial effusions are also common. The gold standard means to establish a diagnosis of myocarditis is an endomyocardial biopsy; however, this test is limited by inherent risk and low sensitivity as the inflammatory process often occurs in a patchy distribution.5 The diagnosis is more commonly based on a history of chest pain, which may have been preceded by a viral prodrome, elevation in cardiac enzymes and a non-ischemic pattern of DGE on CMR. As was the case in our athlete described above, myocarditis is frequently confused for a myocardial infarction based on symptoms, ECG findings and cardiac enzyme release. In this scenario, there should be a low threshold to perform a CMR to confirm the diagnosis of myocarditis.

Though not as prevalent as other cardiac diseases, approximately 0.5% to 4.0% depending on age and region of the world, myocarditis accounts for 5-22% of sudden cardiac deaths (SCD) in younger populations.6-18 Furthermore, there appears to be a higher incidence of SCD occurring in the context of exercise in cases of myocarditis.10-18 Many of these analyses looked at autopsy data to determine the cause. For instance, one of the earliest retrospective studies was done in Swedish orienteers who experienced SCD. Of the 15 men and one woman studied, myocarditis was the most common histopathological diagnosis after autopsy and most of the cases were associated with exercise.13 Another study evaluated the autopsy data of 126 military recruits who experienced non-traumatic sudden death. Of the total number of deaths, 108 were related to exercise and 64 due to cardiac causes. Amongst the cardiac causes of death, myocarditis was responsible for 20%.14 In another 10-year observational study of 162 subjects under 40 years of age who experienced SCD, myocarditis was discovered on autopsy in 22% of cases.15 Of the total number of SCD, 23% were associated with exercise.15 Despite these studies being small and observational, it appears that myocarditis serves as a risk factor for SCD, especially in younger subjects. Exercise also seems to be associated with an increased incidence of SCD in patients with myocarditis. Clearly this is of particular concern to athletes where exercise and competitive sport is a major component of their lifestyle.

The natural history of viral myocarditis appears to be characterized by an acute phase of viral replication followed by a sub-acute immune response phase and finally a chronic phase. The chronic phase ranges from complete recovery to fulminant heart failure. It is unclear, from the available data, whether most SCDs in athletes occur early (acute and sub-acute phases) or late (chronic phase) in the disease course.

As established in animal models, the mechanism of increased SCD with exercise in the early stage of disease is thought to be a result of an accelerated and progressive inflammatory response leading to an unstable myocardial substrate.19-22 Although these early studies focused on viral etiologies of myocarditis, they provided insight on how exercise can affect the immune system.23-26 The process is thought to begin with a period of immune suppression as a result of excessive physical exertion.24 This depressant effect via the T lymphocytes, interleukin and the natural killer cell system can predispose the patient to upper respiratory infections or allow an already infected patient a period of time where the virus can replicate at rapid rates.19,22 This depressant phase is then followed by a surge of inflammation, which may be exaggerated given the concomitant cytolysis from a rapidly replicating virus. This process allows for more necrosis, fibrosis, and subsequently a pro-arrhythmic myocardium. Even in models that studied non-infectious myocarditis, exercise was associated with a pronounced inflammatory response that led to structural changes in the heart.23 Moreover, an exaggerated inflammatory response leads to increased catabolism and degradation of myocardium and skeletal muscle due to high demand for energy sources.25 This can not only delay recovery due to deconditioning but could also lead to poor performance and increased risk of musculoskeletal injury with continued physical exertion.25

Current guidelines in the United States recommend that athletes with a probable or definite diagnosis of recent myocarditis should not participate in competitive sports while active inflammation is present regardless of age, gender or left ventricular function (Class III, LOE C).28 These guidelines present a challenge as there is no specific test that reliably confirms resolution of inflammation. The duration of inflammation is variable and can take months for resolution. Athletes should undergo clinical testing with an exercise ECG, echocardiogram and Holter monitoring no less than 3 to 6 months after the initial illness (class 1 LOE C).28 The duration of exclusion (3 months vs. 6 months) should be individualized and depends on the initial severity of disease. European guidelines give similar recommendations on prohibiting competitive activity for athletes; however, they mandate a 6-month restriction before the disease process should be evaluated for resolution.29

Chronic Phase and Return to Play

Assuming normalization of LV function, the guidelines suggest that it is reasonable to return to competitive sports once there is no biomarker evidence of inflammation and no concern for clinically relevant arrhythmias (Class IIa LOE C).28 Prior to clearance the athlete should demonstrate a normal workup as described above (echocardiogram, exercise ECG and Holter monitor). The role of follow-up MRI to evaluate for resolution of DGE remains unresolved and controversial. An interesting aspect of human observational studies of SCD in myocarditis is that many subjects did not endorse symptoms and were discovered to have myocarditis on autopsy. While some may have died during the early phase of the disease, it is likely the mechanism of death in many others was secondary to scar related arrhythmia, which may occur long after the initial insult. This raises the question of how much we should worry about residual scar formation within the myocardium after an episode of myocarditis. The literature is currently limited in this area, but available evidence suggests a strong prognostic role for residual scar. In one study, 35 athletes with ventricular arrhythmias and left ventricular LGE on CMR were compared to athletes with ventricular arrhythmias and no LGE and healthy control athletes. 27 of 35 athletes with LGE had a stria LGE pattern on the lateral wall of the left ventricle compared to none of the healthy control athletes (p < 0.001).30 Subsequently, at 38 month follow up, six of 27 athletes with a stria pattern had malignant arrhythmic events including a shock from an ICD, sustained ventricular tachycardia, and sudden death.30 In addition, five of six events occurred during exercise. In another smaller study that followed seven athletes with lateral wall LGE over three years, six of seven athletes were prohibited from participating in competitive sports due to either ventricular arrhythmias or progressive left ventricular dysfunction.31 More recently, two large studies were conducted to better understand the prognostic value of LGE during the acute phase of myocarditis; these studies included all comers with myocarditis and were not specific to athletes. In one study of 670 patients with myocarditis, the presence of LGE was significantly associated with major adverse cardiac events (MACE) in a multivariate model (HR: 2.22, P < 0.001).32 This finding was replicated in a second study of 374 patients with acute myocarditis and preserved ejection fraction where the authors also demonstrated that the presence of LGE was an independent predictor of MACE (OR 2.73; p = 0.01).33 In both studies the highest risk pattern of LGE was in the septum.

It is our practice to repeat CMR after 3-6 months in addition to the guideline recommended work-up. On those occasions where residual scar is present, particularly in a stria pattern, we adopt a shared decision making strategy. Our current knowledge of the literature is presented to the athlete, including the documented increased risk of SCD. If the athlete decides to restrict competitive activity, exercise guidelines are provided. In the absence of data on how to best guide these athletes we extrapolate from cardiac rehabilitation guidelines. Our policy is to provide an exercise prescription based on the results of a cardiopulmonary stress test that aims to achieve a level of intensity and duration of exercise equivalent to 1000-2000 calories per week. The exercise heart rate should be targeted to 60-70% of the heart rate reserve (assessed during cardiopulmonary test on usual medications). High intensity interval training (HIIT) may be considered if the athlete is unsatisfied with this degree of restriction based on the known benefits and tolerability of HIIT in post myocardial infarction and heart failure patients. If the athlete wishes to return to competitive sporting activity, recommendations are provided on how best to do so in as safe a manner as possible. The athlete is followed with intermittent repeat rhythm monitors, imaging and stress testing. The frequency of these tests depends on the sporting activity and the degree of DGE.

Returning to our athlete in the case presented, he was reevaluated with inflammatory markers, 12 lead ECG, stress ECG, a Holter monitor and CMR after 3 months. These studies were normal and he was permitted to return to competitive cycling.

YOU ARE HERE: Home > Latest in Cardiology > Myocarditis in the Athlete