Transcatheter aortic valve replacement (TAVR) has evolved from a novel technology to an established therapy for high-risk patients with symptomatic severe aortic valve stenosis (AS). Although randomized trials have established TAVR as the standard treatment in inoperable patients and a reasonable option in intermediate- or high-surgical-risk patients, bicuspid AS has been excluded from these major trials.1-4 This was mainly attributable to concerns about challenging anatomic features of bicuspid AS for TAVR including the following:

However, accumulated experience and advances in device technology have led to the increased off-label use of TAVR for bicuspid AS.5 Aortic valve structure in 932 patients with operatively excised stenotic aortic valves revealed that the prevalence of bicuspid AS was higher in younger populations: 60% in 61-70 years, 42% in 71-80 years, and 28% in 81-90 years.6 Given the expanding indication of TAVR into moderate surgical risk, the clinical outcomes of TAVR in bicuspid AS warrant special attention.

The initial report by Wijesinghe et al. showed the feasibility of TAVR in 11 patients with bicuspid AS. Edwards SAPIEN valves (Edwards Lifesciences; Irvine, CA) were implanted successfully in all patients with significant hemodynamic improvement, but 2 patients (18.2%) had moderate paravalvular leak.7 Mylotte et al. showed the feasibility of TAVR in bicuspid AS using the first-generation balloon-expandable valves (SAPIEN) or self-expanding valves (Medtronic CoreValve [Medtronic, Dublin, Ireland).8 Paravalvular leak ≥ grade 2 occurred in 28.4% of patients (19.6% with SAPIEN vs. 32.2% with CoreValve; p = 0.11). One-year mortality was 17.5%, without significant difference between the valves (20.8% with SAPIEN vs. 12.5% with CoreValve; log rank p = 0.12). Similar to what has been observed in tricuspid AS, the use of multidetector computed tomography (MDCT) was associated with a lower rate of significant paravalvular leak (odds ratio: 0.19; 95% confidence interval: 0.08-0.45; p < 0.0001). Furthermore, MDCT showed the higher accuracy to detect bicuspid AS compared with echocardiography.9

Despite the higher rate of significant paravalvular leak and lower device success rate in bicuspid AS after SAPIEN and CoreValve implantation, improved outcomes using the new-generation devices (SAPIEN 3 or LOTUS Valve System [Boston Scientific; Marlborough, MA]) were reported.12,13 In 51 patients with bicuspid AS treated with SAPIEN 3, no patients had second valve implantation or paravalvular leak ≥ moderate. Similarly, the Bicuspid Aortic Stenosis Following Transcatheter Aortic Valve Replacement Registry showed lower rate of paravalvular leak ≥ moderate and higher device success rate with the new-generation devices compared with the early-generation devices (0.0% vs. 8.5%; p = 0.002). The external skirt of SAPIEN 3 allows effective sealing, which may mitigate the morphological challenges of bicuspid AS. Similarly, the mechanical expanding LOTUS Valve System with adaptive sealing along with retrievability and repositioning may facilitate optimal positioning and prevent paravalvular leak. 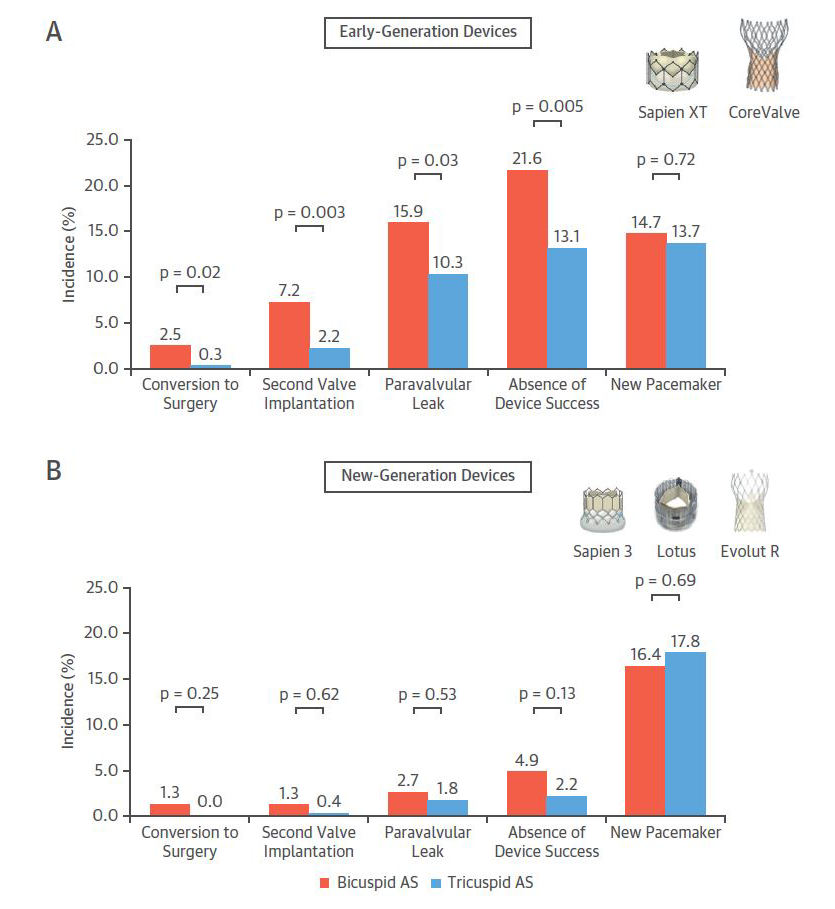 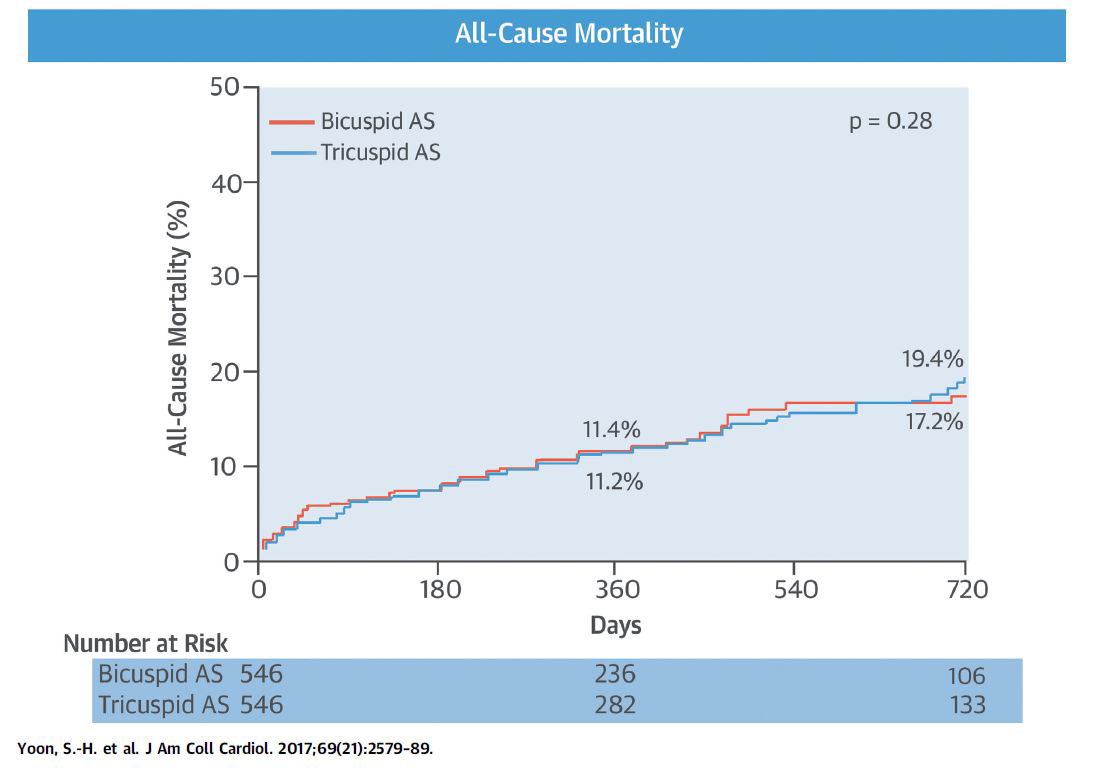 Although these are encouraging data, there remain issues to be resolved. The association between outcomes of TAVR and the morphology of bicuspid AS should be evaluated. When stratified according to the bicuspid AS morphology, the rates of annulus rupture after TAVR using the balloon-expandable valves were numerically high in type 1 bicuspid AS with calcified raphe (Figures 4-6). Due to the sealing skirt, a lower degree of oversizing is required when using the SAPIEN 3 compared with the SAPIEN XT. Nevertheless, the annulus rupture occurred in 2.3% of patients when using the SAPIEN 3, which suggests that simple application of traditional annulus measurement and device sizing are not necessarily appropriate in treating bicuspid AS. 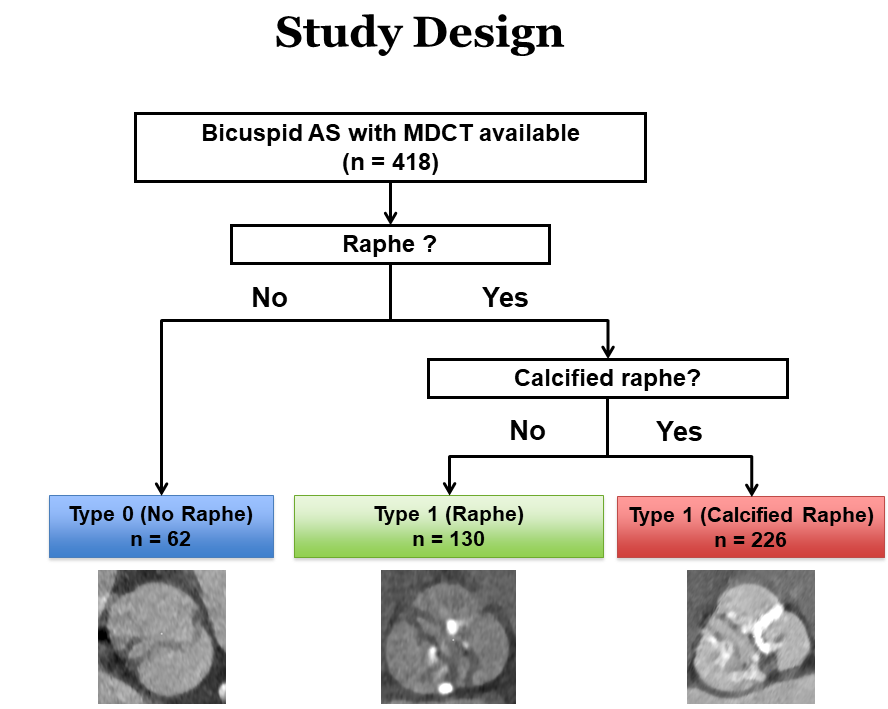 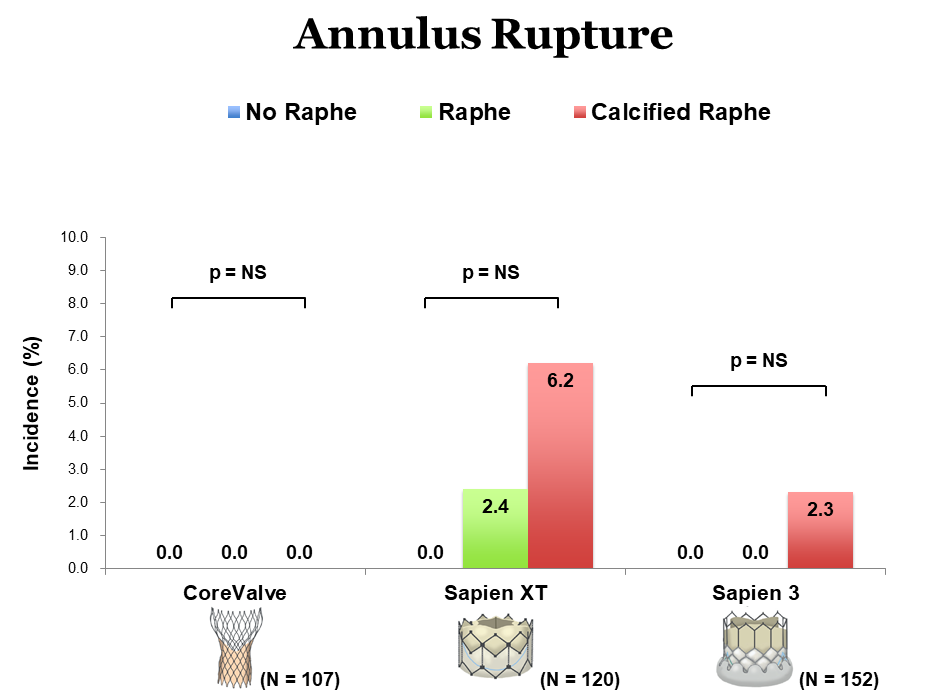 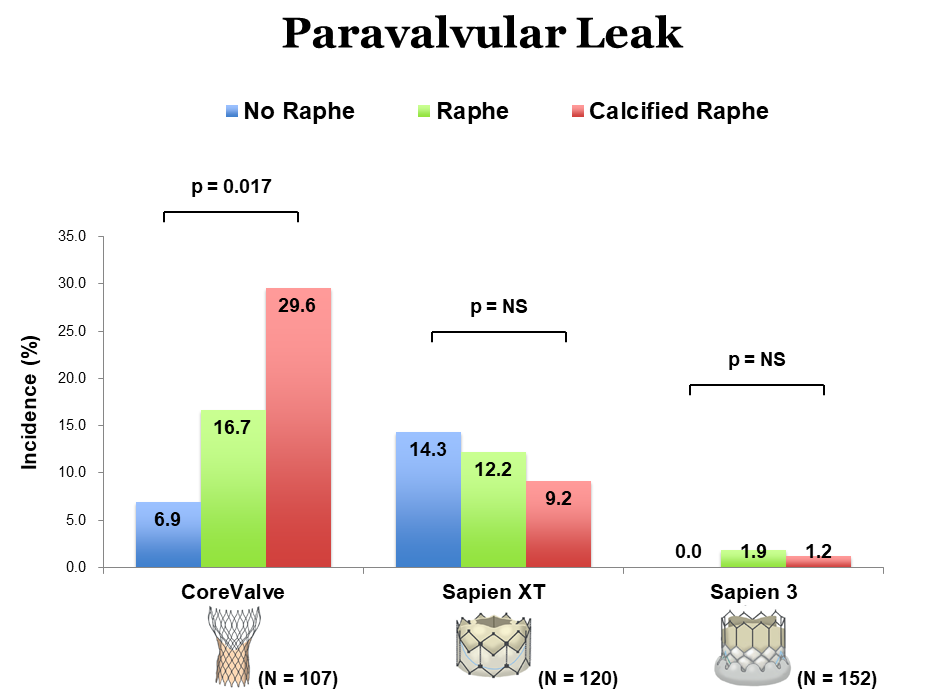 Furthermore, concomitant aortopathy (if present) should be considered when treating bicuspid AS. The risk of aortic dissection or rupture is greater in patients with a bicuspid aortic valve than in the general population, and that risk increases with aging-related progressive aortic dilation and degeneration.15,16 According to the updated guidelines, replacement of the ascending aorta is reasonable in patients with bicuspid aortic valve who are undergoing surgical aortic valve replacement when the diameter of ascending aorta is greater than 4.5 cm (class of recommendation IIa; level of evidence C-EO [consensus of expert opinion based on clinical experience]).17 These recommendations were based on previous studies including patient population with younger age, fewer baseline comorbidities, and longer life expectancy. Therefore, future studies are needed to evaluate the incidences of ascending aorta aneurysm or aortic dissection/rupture in patients with bicuspid AS undergoing TAVR. Finally, limited data exist regarding the durability of transcatheter heart valves in the bicuspid AS population. Due to unfavorable anatomy, there is a concern about under-expansion of valves, which potentially leads to structural valve failure. Future studies are awaited to evaluate the long-term durability of transcatheter valves in the bicuspid AS population.

In conclusion, procedural challenges of TAVR in bicuspid AS were observed with early-generation devices, but improved procedural outcomes were achieved with the new-generation devices. Cumulative 2-year all-cause mortality rates of patients with bicuspid AS were comparable to those with tricuspid AS. However, limited data exist regarding long-term survival and hemodynamic data. Therefore, careful consideration is required during the decision-making process to treat patients with bicuspid AS, particularly for younger patients with long life expectancy and unfavorable anatomy including a calcified raphe and/or a dilated ascending aorta.