The Management of MVD in STEMI: The Science and Art of Decision-Making in STEMI

Multi-vessel disease (MVD) is present in about 50% of patients with ST-segment elevation myocardial infarction (STEMI) referred for primary percutaneous coronary intervention (PCI).1 Although the presence of MVD has been associated with a worse prognosis, not all studies have shown improved outcomes when these so called "non-culprit lesions" are treated with PCI. In theory, one might argue that this is because the lesion in the non-infarct artery is an "innocent bystander" and therefore should be approached in much the same way one approaches stable ischemic heart disease. Opponents to this argument might propose that these non-culprit lesions may also be biologically active, (studies have shown that there are often multiple complex plaques in patients with acute myocardial infarction [MI]2,3), and therefore these arteries warrant treatment in much the same way one would approach any unstable lesion.

Not long ago, the American College of Cardiology and American Heart Association guidelines for the management of STEMI recommended against PCI of the non-culprit artery at the time of primary PCI.4 This recommendation was based on a large body of evidence from observational studies that reported a worse outcome with multi-vessel PCI performed at the time of primary PCI.5 More recently, however, several randomized controlled trials (RCT) have demonstrated a favorable outcome with multi-vessel PCI in stable patients with STEMI. Based on some of these trials, a revised Class IIB recommendation was given for considering PCI of the non-infarct artery in selected patients with STEMI and MVD, either at the time of primary PCI or as a planned staged procedure.6 Despite the upgraded recommendation, the writing committee emphasized the importance of individualizing care for each patient, balancing the anticipated benefits from multi-vessel PCI against the potential risks. This review will summarize the available evidence from some of the more contemporary data regarding the management of MVD in STEMI and outline an algorithm for approaching such patients.

Multi-Vessel PCI at the Time of Primary PCI

The PRAMI (Preventive Angioplasty in Acute Myocardial Infarction) trial7 randomized 465 patients at 5 PCI centers in the United Kingdom to a strategy of multi-vessel PCI performed at the time of primary PCI or culprit-only revascularization. An ischemia-guided approach to care was encouraged in the culprit-only revascularization group, and staged PCI of the non-culprit artery was discouraged. The trial was designed to enroll approximately 600 patients to demonstrate a 30% reduction in the primary outcome, assuming a 20% event rate. However, the trial was stopped early as recommended by the data and safety monitoring board due to a highly significant difference in clinical outcomes between the two groups. The primary outcome, a composite of death from cardiac causes, non-fatal MI, and refractory angina, was significantly lower with multi-vessel PCI performed at the time of primary PCI compared with culprit-only revascularization (9 vs. 22%; hazard ratio [HR] 0.35; 95% confidence interval [CI], 0.21-0.58; p < 0.001). Although the study was not powered to show significant differences in the individual components of the composite endpoint, there were consistent reductions in all the components of the clinical endpoints, with statistically lower rates of recurrent non-fatal MI (HR 0.32; 95% CI, 0.13 to 0.75; p = 0.009), refractory angina (HR 0.35; 95% CI, 0.18-0.69; p = 0.002), and the combined endpoint of death or non-fatal MI (HR 0.36; 95% CI, 0.18-0.73; p = 0.004). There was a trend toward a lower mortality with multi-vessel PCI performed at the time of primary PCI (HR 0.34; 95% CI, 0.11-1.08; p = 0.07).

CvLPRIT (Complete Versus Lesion-Only Primary PCI Trial)8 compared a strategy of multi-vessel PCI in STEMI patients (performed either at the time of primary PCI or as a staged in-hospital procedure) with culprit-only revascularization. In this multicenter trial enrolling 296 patients at 7 centers in the United Kingdom, the primary outcome, a composite of death, reinfarction, heart failure, and ischemia-driven revascularization at 12 months, was significantly lower in the patients assigned to multi-vessel PCI (roughly two thirds of the intervention patients had multi-vessel PCI performed at the time of primary PCI, and one third had staged multi-vessel PCI before hospital discharge) compared with culprit-only revascularization (10 vs. 21%; HR 0.45; 95% CI, 0.24-0.84; p = 0.009). There were no significant differences in the individual components of the composite endpoint, although the study was not powered to detect differences in these clinical endpoints.

More recently, the Compare-Acute (Fractional Flow Reserve-Guided Multivessel Angioplasty in Myocardial Infarction) study9 evaluated the role of fractional flow reserve (FFR) guided PCI of the non-culprit artery performed at the time of primary PCI with usual care. In this study of 885 patients with STEMI and MVD who had received successful primary PCI, all patients underwent FFR assessment of any non-culprit coronary artery that contained stenosis of >50%. However, in the group of patients assigned to no revascularization, the patient and treating physician were blinded to the FFR results. In this group, the referring physician was expected to make the decision to proceed with PCI of the non-culprit artery based on symptoms, additional testing, and clinical judgement. For this reason, clinically indicated elective revascularizations that were performed within 45 days of the primary PCI were not counted as events in the no-revascularization group. The primary endpoint, a composite of death from any cause, non-fatal MI, revascularization, and cerebrovascular events at 12 months, occurred in 7.8% of patients in the FFR-guided multi-vessel PCI performed at the time of primary PCI group and in 20.5% of patients in the culprit-artery-only group, (HR 0.35; 95% CI, 0.22-0.55; p < 0.001). This was entirely driven by a lower rate of revascularization in the culprit-artery-only group, with no significant difference in the rates of death or non-fatal MI between the two groups.

There remains a paucity of data on the optimal approach to treating complex MVD. Many of the RCT excluded patients with left main disease and/or chronic total occlusions (CTO) of the non-infarct artery,7-9 and fewer than one third of enrolled patients had triple-vessel disease.7-10 The EXPLORE (Evaluating Xience and Left Ventricular Function in PCI on Occlusions After STEMI) trial16 is the only RCT that examined staged PCI of a CTO following STEMI. In this study, 304 patients were randomly assigned to a strategy of early PCI of the non-infarct artery CTO or conservative care. There were no significant differences in either of the two primary endpoints (magnetic resonance imaging measured LV ejection fraction and LV end diastolic volume at 4 months) between the two treatment strategies. However, a post hoc subgroup analysis demonstrated an interaction between treatment and location of the CTO; a significant improvement in LV function with staged multi-vessel PCI was noted in the subgroup of patients who had a CTO of the left anterior descending artery. This information maybe hypothesis generating, but there is not enough information at the current time to support any recommendations regarding the optimal management of STEMI and complex MVD; additional trials are needed to inform physicians. The Hybrid Coronary Revascularization trial (ClinicalTrials.gov #NCT03089398) will compare a strategy of hybrid coronary revascularization with multi-vessel PCI in patients with MVD involving the left anterior descending or left main artery. A subgroup analysis of outcomes for those patients who are enrolled in this trial following primary PCI may provide some additional insight into the role of staged hybrid coronary bypass surgery in patients with STEMI and complex MVD. Until we have more data, it is important to remember that when indicated, the role of surgery versus multi-vessel PCI for those patients with complex non-culprit artery disease should be discussed with an interdisciplinary team of surgeons and interventional cardiologists.

An Algorithm for the Management of STEMI Patients With MVD

Taken collectively, the trial results support a strategy of non-infarct artery PCI (either at the time of the primary PCI or as a staged procedure) as the initial approach to treating STEMI patients with MVD who are free of cardiogenic shock. The studies of routine PCI in stable patients with MVD all demonstrated safety with multi-vessel PCI without any excess rates of stroke, bleeding, or contrast-induced nephropathy. However, it is important to realize that these trials were relatively small to modest in size, and in some of the trials, the beneficial results seemed to be entirely driven by a lower rate of repeat revascularization when multi-vessel PCI was performed. Due to the open-label design of these studies, it is highly possible that there was bias in the reporting of some of the softer clinical endpoints, including recurrent ischemia or ischemia-driven revascularization. Several additional trials are ongoing. The COMPLETE (Complete vs Culprit-only Revascularization to Treat Multi-vessel Disease After Primary PCI for STEMI) trial (ClinicalTrials.gov #NCT01740479) will compare the outcomes of approximately 3,900 patients randomized to a strategy of staged multi-vessel PCI or culprit-only revascularization. The trial has completed enrollment, and trial results are expected to be reported in 2018. The FULL REVASC (FFR-Guidance for Complete Non-Culprit Revascularization) trial (ClinicalTrials.gov #NCT02862119) is currently recruiting patients with STEMI and very high-risk non-STEMI. The investigators aim to enroll approximately 4,000 patients and will test the hypothesis that a strategy of complete revascularization with FFR-guided PCI done before hospital discharge will result in an improvement in clinical outcomes at 1 year compared with a culprit-only approach to revascularization.

Until we have more solid evidence supporting a reduction in hard clinical endpoints with multi-vessel PCI, we must continue to emphasize the importance of clinical judgment when deciding on multi-vessel PCI performed at the time of primary PCI, staged multi-vessel PCI, coronary artery bypass surgery, or an ischemia-guided approach to care. Factors to think about include the clinical status of the patient, the complexity and success of the initial infarct artery PCI, the anticipated complexity of the non-infarct artery PCI, the amount of myocardium jeopardized by the stenosis, and the presence of other clinical or socio-demographic features that might favor one strategy over another. Figure 1 outlines a general approach to managing non-infarct artery disease in STEMI. This algorithm is intended to give a general guide regarding the factors that might influence one's decision to intervene on the non-culprit artery, but it should not replace clinical judgement. Although the algorithm suggests deferring non-culprit PCI in shock patients, it is critical to recognize that this suggestion is based on the initial reports from the CULPRIT-SHOCK trial, and this may change as the data are further analyzed. Although not included in the figure, additional things to consider might be the role of physiologic testing (i.e., FFR guidance or noninvasive stress testing) for cases in which there is uncertainty regarding the severity of the lesion in the non-infarct artery or consideration for coronary artery bypass surgery when there is complex disease.

Figure 1: An Algorithm for the Management Non-Infarct Artery Disease in STEMI 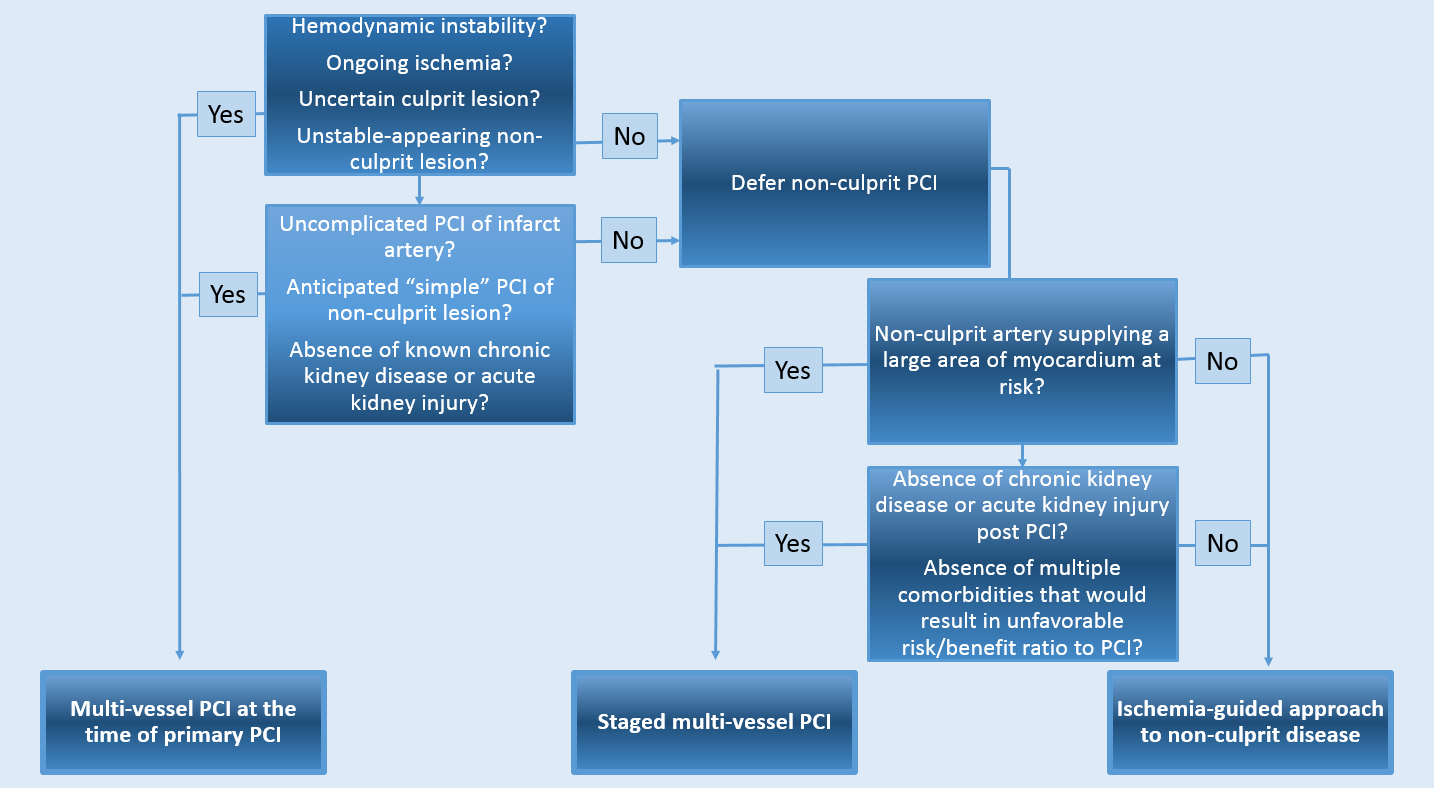 In summary, much of the more recent data from RCT suggest that multi-vessel PCI in stable patients with STEMI is safe, results in a decrease in the need for repeat revascularization, and may improve other cardiovascular outcomes. On the other hand, early results from the CULPRIT-SHOCK trial support a strategy of culprit-only revascularization during the index procedure in patients with acute MI complicated by cardiogenic shock. Based on the RCT data, one might conclude that multi-vessel PCI is a reasonable treatment for stable patients with STEMI and MVD. However, it is important to recognize that multi-vessel PCI may not be the right approach for everyone. There is an "art" as well as a "science" to treating these patients; rather than generalizing management based on the RCT, we must instead tailor therapy for each patient, incorporating clinical features, angiographic findings, and patient preference into our decision-making.

YOU ARE HERE: Home > Latest in Cardiology > The Management of MVD in STEMI: The Science and Art of Decision-Making in STEMI