PCI or CABG in Stable Patients With Multivessel CAD and Diabetes

Diabetes mellitus is a chronic metabolic disease characterized by hyperglycemia. This condition is classified as either type 1 diabetes mellitus (T1DM) or type 2 diabetes mellitus (T2DM), depending on the underlying pathophysiology. T1DM, usually characterized by onset at an early age, is an autoimmune-mediated destruction of insulin-producing islet beta cells in the pancreas that eventually leads to a loss of insulin secretion. T2DM, often characterized by adult onset, is due to insulin resistance and, consequently, a slow progression to hyperglycemia. Patients with diabetes have an increased risk for cardiovascular (CV) disease, and the risk for CAD is increased two- to fourfold compared with people without diabetes (this is even higher in patients with T1DM.3 In diabetes, risk factors such as hyperglycemia, dyslipidemia, hypertension, kidney failure, and overweight (especially seen in T2DM) are all important contributing factors to the increased risk and complexity of CAD. Patients with diabetes have accelerated atherothrombosis with an early onset of atherosclerosis suggested to be more diffuse and more extensively involved and with an increased risk of progression of coronary atherosclerosis compared with patients without diabetes.4,5 In patients with diabetes, coronary angiography often reveals complex multivessel CAD, an important challenge for the multidisciplinary heart team that has to discuss and decide, together with the patient, the best revascularization options in the light of current guidelines.1,2

Because 90% of all patients with diabetes have T2DM, the results from the abovementioned studies may not be generalized to patients with T1DM because the type of diabetes (T1DM or T2DM) has not been reported. Type of diabetes may be of great importance because long-term prognosis after CABG is dire in patients with T1DM compared with patients with T2DM who have a similar long-term prognosis as patients without diabetes (Figure 1).13 The reason for the poorer prognosis in T1DM after CABG is not fully understood; other comorbidities such as chronic kidney disease, peripheral artery disease, and heart failure, as well as diabetes duration and glycemic control may to some extent explain the dire prognosis observed in T1DM.13 Because diabetes duration in general is much longer in patients with T1DM, the exposure time to hyperglycemia is essential. Long-standing hyperglycemia induces inflammation in the vessel wall, promoting atherosclerosis, and abnormal vascular findings (e.g., earlier onset, higher degree, and more disseminated and aggressive) are much more common in patients with T1DM compared with individuals without diabetes.14 In two recent Swedish nationwide observational cohort studies, we demonstrated that in patients with diabetes, poor glycemic control prior to CABG is associated with an increased risk of death or major CV events (MACE).15,16 This association was even more pronounced in patients with T1DM, demonstrating a relationship between hemoglobin A1c (HbA1c) and death or MACE already at HbA1c levels 7.1-8%, which was further increased by 18% for every 1% absolute increase in HbA1c levels (Figure 2).16 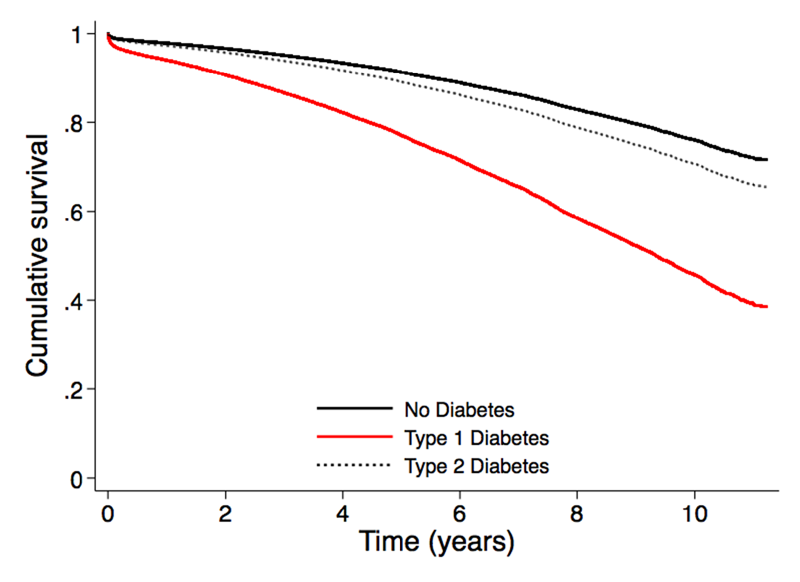 This figure shows the relationship between pre-operative HbA1c level and all-cause mortality or a MACE. The graph shows the adjusted hazard ratio (solid line) and 95% confidence intervals (dashed lines) for the association between baseline HbA1c and combined all-cause mortality and MACE occurrence. The baseline HbA1c level was modeled with restricted cubic splines with 3 knots (at 7.1, 8.5, and 9.8%) in a Cox regression model. The reference level was set at 7.0% for the estimation of hazard ratios. The Cox model was adjusted for age and sex.16 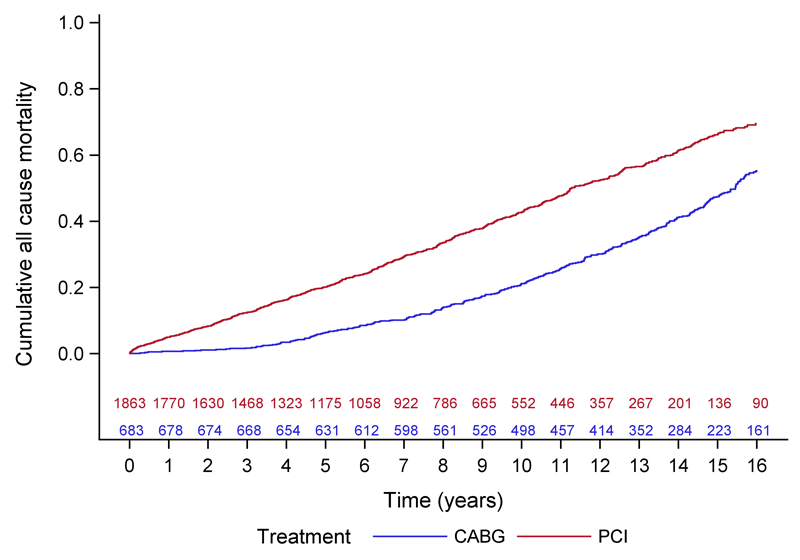 This figure shows the cumulative all-cause mortality survival curves in patients with T1DM with multivessel disease who underwent revascularization by CABG (n = 683) or PCI (n = 1,863) from 1995 to 2013 in Sweden.17

YOU ARE HERE: Home > Latest in Cardiology > PCI or CABG in Stable Patients With Multivessel CAD and Diabetes