Myocardial rupture is commonly thought to be a rare complication following an acute myocardial infarction (MI), although it occurs more frequently than many might expect. Without an autopsy or imaging evidence, sudden cardiac death at the time of acute MI can easily be attributed to one of a variety of etiologies such as muscle death, intractable arrhythmia, heart block, or pulmonary embolism, with the diagnosis of rupture often forgotten. Modern therapies have probably reduced the occurrence of this complication but have not eliminated the problem completely. The utilization of imaging technology or rapid transfer to the cardiac catheterization laboratory offers the opportunity to capture patients with impending rupture and potentially intervene before frank rupture and death occur.

Incidence and Prevalence of Rupture

A retrospective study conducted by Hutchins et al.1 found that out of 153 cases (41 women and 112 men) of sudden death with acute MI adjudicated by a medical examiner, myocardial rupture was present in 47 (30.7%) patients, of which 35 patients had no prior medical problems. None of the 47 patients had symptoms that corresponded to coronary artery disease prior to presentation, although those previously evaluated by cardiac catheterization did show evidence of multivessel disease. Out of this cohort of patients, women had an approximately 60% chance of myocardial rupture, whereas men had a 20% chance. Age was found to be a significant and dependent factor for myocardial rupture. The most common site of myocardial rupture was at the anterior wall (45%, n = 21), followed by the posterior wall (38%, n=18), lateral wall (9%, n = 4), apex (6%, n = 3), and, rarely, within the right ventricle (2%, n = 1).1 Overall, this study suggests that when both pre- and post-hospitalization deaths are considered, myocardial rupture is present in a significant proportion of patients with early, sudden death in the setting of acute MI.

Over the last couple of decades, the incidence of free wall rupture appears to be decreasing. In a single center, longitudinal study,2 the overall incidence of free wall rupture was approximately 4%. When the data were stratified into 5-year blocks between 1977 and 2006, the incidence of rupture declined from >4% during 1977-1982 to <2% during 2001-2006. The decline is associated with both a progressive decrease in the overall rate of death (94-75%) from rupture, progressive increase in the use of reperfusion therapies, better control of blood pressure, and use of beta-blockers, angiotensin-converting enzyme inhibitors, and aspirin.2

Timing and Risk for Rupture

The initial presentation of acute MI corresponds to the occurrence of the acute ruptures, but myocardial rupture can occur later after acute infarction. The VALIANT (Valsartan in Acute Myocardial Infarction) trial,3 which randomized 14,703 patients with clinical congestive heart failure or reduced ejection fraction of <40% within 10 days of an acute MI, provides some insight into the timing of death from rupture later after infarction.4 Over a median follow-up of 25 months, there were 2,878 deaths, of which autopsy reports were available for 398 patients. The cause of death was divided into either non-cardiovascular or cardiovascular, which was further classified into sudden cardiac death (if it occurred unexpectedly in an otherwise stable patient) or death due to MI, heart failure, stroke, or other cardiovascular cause. Sudden cardiac death occurred in 98 patients, of which 40% resulted from fatal MI or myocardial rupture. The rates of recurrent MI or myocardial rupture tended to occur early in the post-MI period, most prominently within the first month, and declined with time.4

With the evolving world of medical treatment, the likelihood of succumbing to a myocardial rupture has decreased over the last 35 years. However, there are still important risk factors to consider, including a first MI with absence of collateral flow, anterior or lateral infarct, size of infarct, female sex, age over 70 years, persistent ST elevations, persistent hypertension, and recurrent or persistent chest pain with evidence of infarct extension.2,6-9 Additional studies have identified patients at risk if the patients are also younger in age or have a delayed presentation, smaller infarct size, or unsuccessful reperfusion. Furthermore, increased mortality was seen among patients with a need for inotropic support, cardiac arrest, or cardiopulmonary resuscitation at the time of presentation, requirement for extracorporeal membrane oxygenation placement, unsuccessful reperfusion, and surgical technique of myocardial rupture repair.10

Patients with impending rupture often complain of chest pain in the setting of non-specific electrocardiogram changes. They can develop symptoms similar to tamponade and/or present with shock, which can ultimately lead to cardiac arrest.2,3,6 Myocardial rupture is likely not as rare as once believed but remains undiagnosed because autopsies are infrequently performed. Because presenting symptoms may overlap other diagnoses or are non-specific in nature, diagnosis of rupture may be missed unless it is considered in the differential.

Resources to aide with making the appropriate diagnosis include left ventriculography during cardiac catheterization, which provides visualization of extravasation of contrast into the myocardium (Figure 1). Additionally, standard transthoracic echocardiography can occasionally demonstrate an intramyocardial hematoma (Figure 2). This in conjunction with an effusion and characteristics consistent with tamponade (including chamber collapse, dilated inferior vena cava and respiratory variations of valvular inflows by Doppler analysis) suggests myocardial rupture.11 The use of contrast echocardiography can also aid in the diagnosis.12 If the patient remains stable, a CT can be obtained which can demonstrate outpouchings or extravasation of contrast into the myocardium (Figure 3) allowing easy visualization of the site of rupture.

Figure 1: Extravasation of Contrast (Outpouching Along Inferior Apex) Into the Myocardium During Left Ventriculography 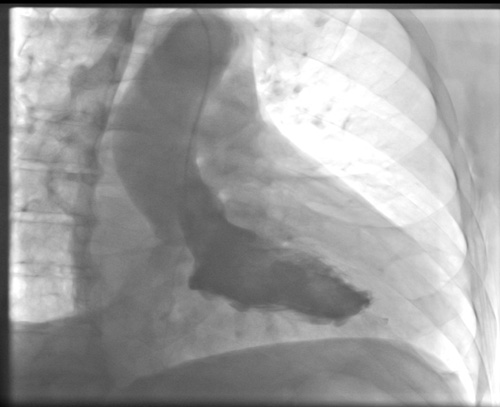 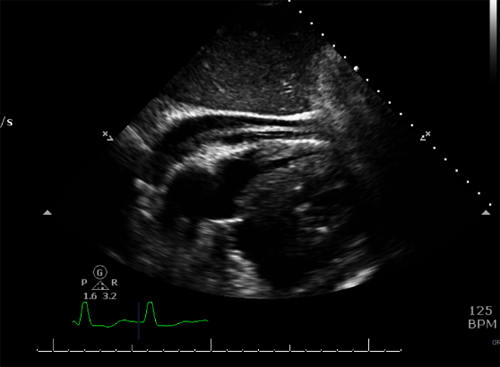 Figure 3: Defect Along Lateral Wall of Mid-Left Ventricle With Outpouching of Contrast 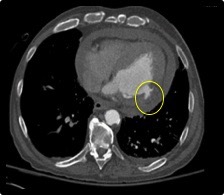 A patient's survival depends on rapid recognition of a myocardial rupture and provision of immediate therapy. If additional information is needed, a transthoracic echocardiogram may be helpful with making this prompt diagnosis. Medical therapy with fluids, inotropes, and vasopressors aimed at hemodynamic stabilization can assist on initial presentation. Providing mechanical support, such as with extracorporeal membrane oxygenation placement, intra-aortic balloon pump, or other support devices can also provide initial hemodynamic support until a cardiothoracic surgeon is available. Surgical management includes placement of a pericardial patch with biological glue or epicardial sutures, providing stability. Additionally, the surgeon may elect to perform an infarctectomy with patch placement and ventricular wall reconstruction, allowing the removal of a weakened area of myocardium to prevent further complications.6,14,15

Making the diagnosis of myocardial rupture and making it early is extremely important when it comes to such devastating outcomes. This diagnosis should enter the mind of all physicians when patients present following an acute MI. With increased recognition, emergent surgical intervention, and stabilization of these patients, survival is possible.

YOU ARE HERE: Home > Latest in Cardiology > Contemporary Management of Post-MI Myocardial Rupture