The diagnosis and prognosis of hypertrophic cardiomyopathy (HCM) is generally clarified by noninvasive imaging, including screening by echocardiography and often refinement by cardiac magnetic resonance (CMR). Herein we will review the imaging modalities and findings relevant to the diagnosis and management of HCM.

Echocardiographic features of HCM are foundational to our understanding of the disease. Current American College of Cardiology and American Heart Association diagnostic criteria include the identification of a hypertrophied left ventricle (LV) of wall thickness typically ≥15 mm in adults without another underlying cause.1 Asymmetric septal hypertrophy has long been recognized as a common and distinctive feature of HCM. In the past, a ratio of septal-to-posterior (inferolateral) wall thickness of 1.3 was used as a diagnostic criterion for HCM, but this finding has severely limited sensitivity and specificity and fails to exclude alternate causes of asymmetric septal enlargement and to include other morphologic variants of HCM.2 These include global/concentric hypertrophy, mid-ventricular hypertrophy with or without apical aneurysm, apical hypertrophy, and focal hypertrophy (Figure 1). 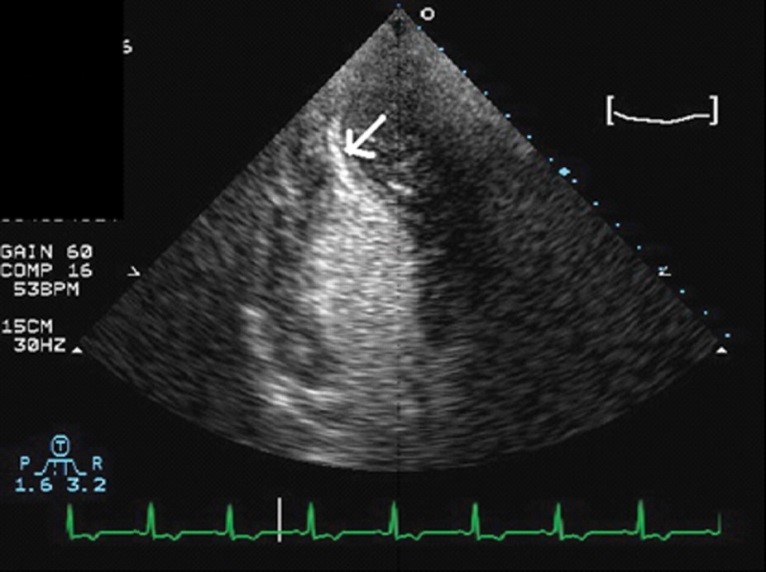 Echocardiography, including M-mode, has brought to light several distinct features of HCM, including mitral valve systolic anterior motion (SAM) and LV outflow tract (LVOT) obstruction (Figure 2). SAM and LVOT obstruction remain an essential imaging dyad with important prognostic implications. SAM causes LVOT obstruction via a confluence of hemodynamic perturbations attendant to HCM. HCM alters the valve spatial orientation such that the mitral coaptation point is anteriorly displaced at baseline. The hypertrophic, bulging septum redirects LV outflow more obliquely along a posterior-to-anterior course, a trajectory that enhances anterior drag on the mitral valve.2 Finally, higher velocities through a narrowed LVOT are thought to exert Venturi forces on the anterior mitral leaflet, pulling it into the LVOT from above as it is pushed in the same direction from the apex.1 These elements can vary significantly according to rhythm, heart rate, pre-load, and afterload, leading to dynamic changes in the severity of LVOT obstruction. Thus, provocative testing can be helpful in assessing the degree of LVOT obstruction, particularly in individuals with symptoms but no evidence of resting LVOT obstruction. 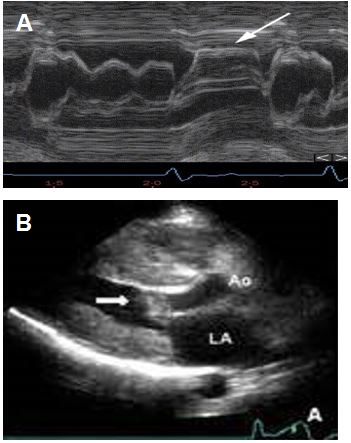 SAM of the mitral valve anterior leaflet as seen on (A) M-mode and (B) two-dimensional echocardiography.

The implications of SAM and LVOT obstruction are manifold. In addition to premature aortic valve closure and reduced cardiac output, the process often distorts the mitral apparatus enough to affect competency and induce mitral regurgitation (MR). The combination of mid-systolic LVOT flow acceleration and mitral regurgitant flow (typically via a posterolaterally directed jet) is described as the "V sign," often best appreciated in the parasternal long axis views (Figure 3). Most important, however, is the quantification of LVOT pressure gradient. An LVOT gradient greater than 30 mmHg marks the diagnosis of obstructive HCM and carries an increased risk of sudden cardiac death.2 For this reason, extensive pulsed Doppler interrogation of the LVOT gradient in the apical views is essential to identify any significant gradients. Careful examination of the Doppler envelope is critical as well because these velocity jets are often situated close to MR jets, and the two can be easily confused. A true intra-cavitary gradient typically demonstrates late peaking of velocities and a dagger-shaped appearance (Figure 4). 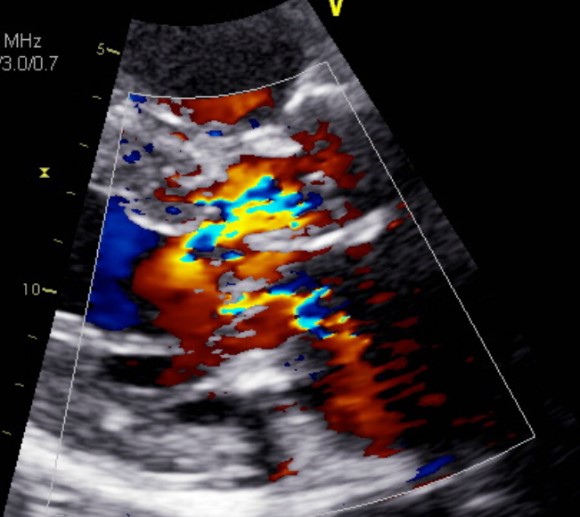 Concomitant systolic flow acceleration through the LVOT and MR, leading to the "V-sign." 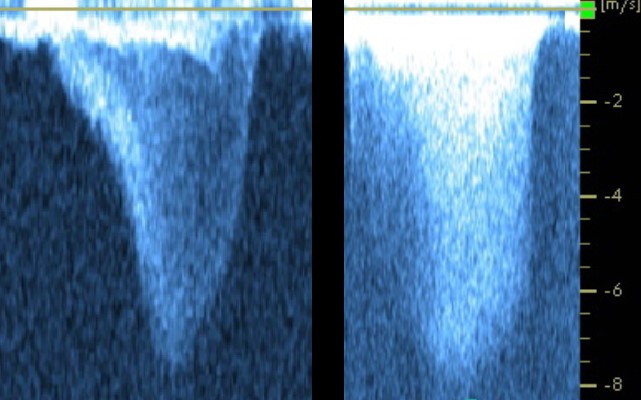 The advantages of CMR are enhanced spatial resolution, image quality, and its inherent three-dimensional nature that have allowed for the identification of morphologic variants of HCM, some of which can be missed by echocardiography.3 Given the relative differences in prognosis, accurately classifying variants of HCM remains a high priority (Figure 5).4 In addition to this greater diagnostic accuracy, CMR provides excellent demarcation between the myocardium and blood pool, allowing the most accurate calculation of LV mass and volumes. Velocity-encoded imaging can provide severity assessments of LVOT gradient and MR. 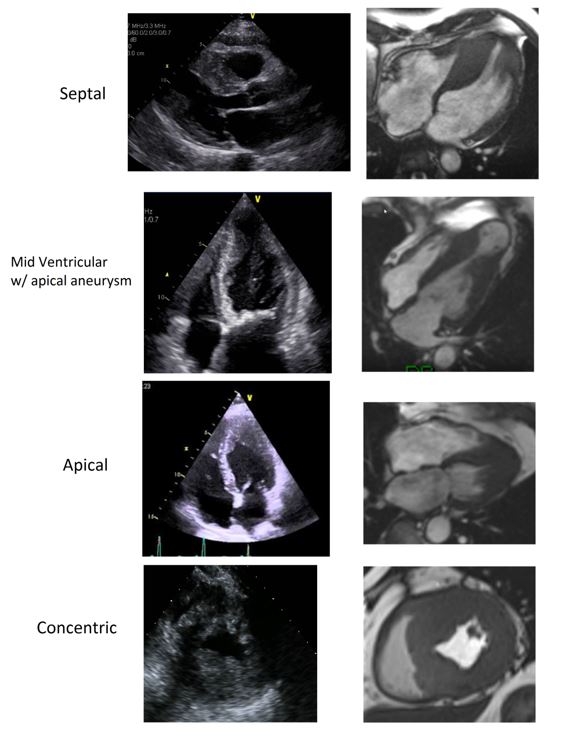 Identification and quantification of the extent of late gadolinium enhancement (LGE) or replacement fibrosis have proved to be valuable features of CMR. LGE accurately identifies areas of myocardial fibrosis that can have prognostic significance.5 The presence of LGE in patients with HCM has been independently associated with increases in all-cause mortality, cardiac death, and sudden cardiac death.6 The extent of LGE appears to be important as >15% of the LV mass subtended by LGE is associated with an increased risk of sudden cardiac death (Figure 6).7 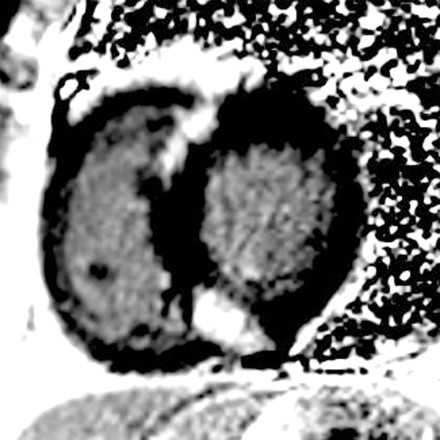 Because localizing focal fibrosis with LGE involves "nulling" the signal of surrounding myocardium, the technique is unable to identify more diffuse interstitial myocardial fibrosis. This has led to the utilization of non-contrast and post-contrast T1 mapping for myocardial tissue characterization. T1 mapping allows for enhanced discrimination between true HCM and morphologic mimics.8 T1-based estimates of extracellular volume have shown an expansion of this compartment in individuals with sarcomere mutations who have not yet developed overt hypertrophy, suggesting some promise in the identification of fibrotic remodeling early in the disease process.9 The predictive ability of T1 mapping in addition to, or in concert with, LGE is not yet understood, although some insight is expected from the forthcoming HCM registry.10

Noninvasive imaging is inseparably connected to the diagnosis and management of HCM. Echocardiography is a staple for screening for the disease and characterization of several HCM variants and can identify SAM and significant LVOT obstruction. CMR provides high-fidelity morphologic information and can diagnose echocardiographically occult HCM variants. CMR also adds additional prognostic information that can be improved depending on the presence and extent of LGE. Other promising information, including T1 mapping for identification of interstitial fibrosis, await clinical validation.

YOU ARE HERE: Home > Latest in Cardiology > Imaging in Hypertrophic Cardiomyopathy