The most recently completed poll on the Invasive Cardiovascular Angiography and Intervention Clinical Topic Collection asked questions about what effect, if any, the CULPRIT-SHOCK (Culprit Lesion Only PCI Versus Multivessel PCI in Cardiogenic Shock) trial will have on practice. The results are shown below. Sixty-five percent of responders chose "Yes," and 35% chose "No." Of those who chose "Yes," 73% indicated that they would focus on the culprit artery. Of the responders who stated that the trial would not affect their practice, 51% responded "Yes" to continued revascularization excluding chronic total occlusions (CTOs). When asked differently, if they would continue doing complete revascularization, only 17% stated complete revascularization including a CTO vessel. The CULPRIT-SHOCK trial recommended CTO percutaneous coronary intervention as part of a complete strategy. The last two questions intended to assess the likelihood that operators have and continue to exclude CTOs as a part of a strategy of complete revascularization in acute myocardial infarction.

My interpretation is that a significant number of responders have been influenced by the trial, but, despite that, CTOs are not a part of their complete revascularization strategy. One wonders to what extent "forced" CTO treatment may have adversely effected the study results. Thanks to all of you who participated. 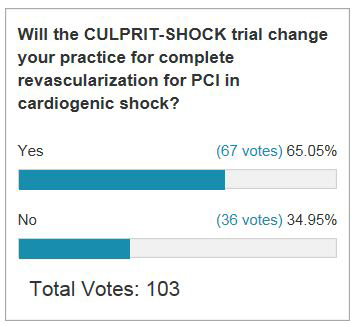 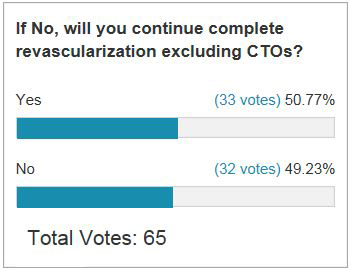