Review of CLOT and CATCH Trials: Treatment of VTE in Patients With Cancer

Venous thromboembolism (VTE), including deep vein thrombosis (DVT), pulmonary embolism (PE), and splanchnic vein thrombosis, is a frequent complication of cancer.1 The development of cancer-associated VTE is associated with reduced quality of life and places a significant economic burden on both the patient and the health care system.2 VTE is the second-leading cause of death in cancer outpatients receiving chemotherapy and has been shown to be an independent predictor of mortality in the population of patients with cancer.3,4 The management of cancer-associated VTE treatment can be challenging because the risks of recurrent VTE and anticoagulant-related bleeding are high despite appropriate management.5 In addition, drug interactions and cancer-related comorbidities, such as renal and/or hepatic dysfunction, decreased oral intake, chemotherapy-induced nausea and vomiting, and thrombocytopenia also add to treatment complexity by limiting the choice of anticoagulant agent.

The long-term use of low molecular weight heparin (LMWH) for the treatment of VTE in patients with active cancer is recommended as first-line therapy based on the results of multiple open-label randomized controlled trials (RCTs).6,7 The two largest studies published to date, the CLOT (Comparison of Low-molecular-weight heparin versus Oral anticoagulant Therapy for the Prevention of Recurrent Venous Thromboembolism in Patients with Cancer) and CATCH (Comparison of Acute Treatments in Cancer Haemostasis) trials, compared a LMWH to vitamin K antagonist therapy in patients with active cancer and acute symptomatic proximal DVT or PE. See Table 1 for baseline characteristics and Table 2 for study results.8,9 Both trials used an open-label study design, the same target international normalized ratio (INR) in the vitamin K antagonist control arm, the same active cancer definition, and the same duration of treatment and had comparable patient eligibility criteria.

Table 1: Study Design and Baseline Characteristics of the CATCH and CLOT Trials 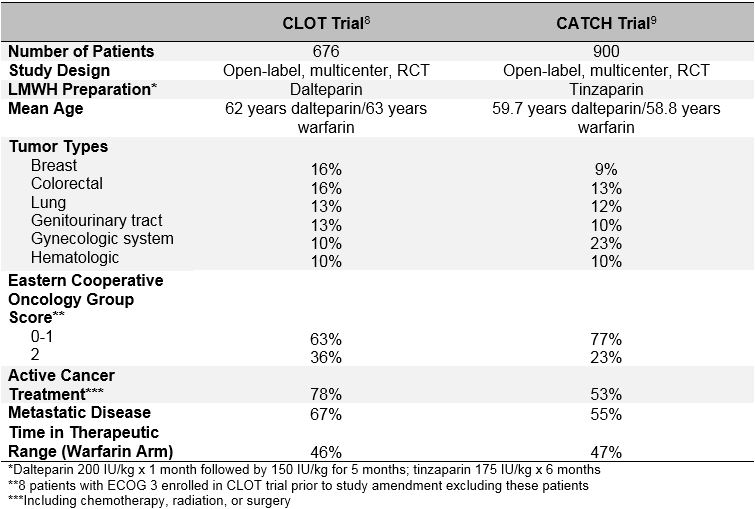 Table 2: Outcomes in the CLOT and CATCH Trials

The failure of the CATCH trial to meet statistical significance for the primary endpoint may be due to the lower-than-expected recurrent VTE rate observed in the warfarin arm. One possible explanation for this observation could be an improvement in warfarin management in the CATCH trial. However, similar levels of INR control in both studies argue against this (time in therapeutic range was 46% in CLOT vs. 47% in CATCH; time above the therapeutic range was 24% in CLOT vs. 27% in CATCH). A more likely explanation is a bias in the selection of "less sick" patients for enrollment in the CATCH trial. Although the CATCH and CLOT studies used similar inclusion and exclusion criteria, key differences in baseline characteristics exist between the two patient populations, particularly with respect to thrombotic and prognostic risk factors. A higher proportion of patients in the CLOT trial were receiving active cancer treatment (72% CLOT vs. 53% CATCH), had a history of prior VTE (11% CLOT vs. 6% CATCH), had evidence of metastatic disease (67% CLOT vs. 55% CATCH), and had a poorer performance status (Eastern Cooperative Oncology Group score of 2 in 36% CLOT vs. 23% CATCH). In addition, mortality during the 6-month treatment period was also higher in the CLOT population (39% CLOT vs. 32% CATCH). Thus, the CATCH patient population likely had a lower inherent risk of recurrent VTE compared with CLOT study patients. It is highly probable that investigators did not enroll patients into CATCH if they felt LMWH would be more beneficial than warfarin, resulting in the selective enrollment of patients who were less likely to develop recurrent VTE.

Patient selection bias is even more evident in the recent randomized trials evaluating the efficacy and safety of direct oral anticoagulants (DOACs) for treatment of acute VTE.10 These oral anticoagulants have been extensively studied over the last decade in atrial fibrillation, VTE treatment, and VTE prevention. In the landmark phase III clinical trials for acute VTE treatment, it was consistently demonstrated that DOACs are non-inferior to warfarin (pooled relative risk [RR] 0.90; 95% CI, 0.77-1.06) in preventing recurrent VTE, and they have a similar or reduced risk of major bleeding (pooled RR 0.40; 95% CI, 0.45-0.83).11 Among those patients who were classified as having "cancer" or "active cancer" in these studies, DOACs also seem to perform similarly to warfarin.12 But a more in-depth examination of these post-hoc data reveals important patient-selection bias and questions the generalizability of the DOAC trial results to "real life" patients with cancer with VTE. In addition to the heterogeneous definitions of "active cancer" used in these trials that differed from the CLOT and CATCH trials, important determinants of recurrent VTE and bleeding were also very different in the DOAC patients with cancer from the LMWH cancer-specific trials (Table 3). These include presence of metastatic disease and concomitant use of anticancer therapy. The vast differences in mortality during the study period also argue that very different groups of patients with "cancer" were included in the DOAC versus LMWH trials. Furthermore, unlike LMWH, which is associated with a significant reduction in risk of recurrent VTE compared with vitamin K antagonists (RR 0.52; 95% CI, 0.36-0.74), DOACs did not significantly reduce this risk in a meta-analysis of 1,132 patients with cancer enrolled in the EINSTEIN clinical trial program, HOKUSAI-VTE (Edoxaban Versus Warfarin for the Treatment of Symptomatic Venous Thromboembolism), RECOVER (Efficacy and Safety of Dabigatran Compared to Warfarin for 6-Month Treatment of Acute Symptomatic Venous Thromboembolism), and AMPLIFY (Apixaban for the Initial Management of Pulmonary Embolism and Deep-Vein Thrombosis as First-Line Therapy) RCTs (RR 0.66; 95% CI, 0.39-1.11).10 All these considerations should caution the unselected use of DOACs in patients with active cancer and acute, symptomatic VTE.13

Table 3: Study Design and Baseline Characteristics of the Subgroups of Patients With Cancer From the Phase III DOAC Trials

All major evidence-based consensus guidelines recommend LMWH for the initial and long-term treatment of cancer-associated VTE.6,7,13 This recommendation is based on the observation that LMWH not only is more effective than warfarin for the prevention of recurrent VTE, but also offers additional advantages over oral agents including stable anticoagulation in patients with poor oral intake, a lack of drug interactions, and clinical experience in the management of anticoagulation surrounding invasive procedures and thrombocytopenia. Although DOACs are not currently recommended for VTE treatment in patients with cancer, RCTs comparing rivaroxaban and edoxaban to LMWH are currently ongoing and will help to clarify their role in cancer-associated VTE.6,13

YOU ARE HERE: Home > Latest in Cardiology > Review of CLOT and CATCH Trials: Treatment of VTE in Patients With Cancer