The Practice of Cardio-Oncology in Spain: Position Statement From Scientific Societies Involved in Cancer and Heart Disease

Cardio-oncology is a new, exciting, and rapidly expanding field born to merge cancer and cardiovascular (CV) care. Spectacular advances in cancer management allow for a great number of patients with cancer to live longer and better.1 Despite this progress, there is growing recognition that many survivors of cancer experience serious CV complications during or after cancer treatment. As many as 30% of survivors of cancer may suffer from cancer therapeutics-related cardiotoxicity, with some events occurring decades after treatment completion.2,3 Moreover, CV events represent the second most common cause of death and morbidity in survivors of cancer.4

Only an integrated, multidisciplinary approach can tackle this important health issue; many gaps in knowledge remain. The most important is the lack of long-term scientifically proven strategies to monitor cardiotoxicity for treatments such as anthracyclines. Several scientific societies have recently developed position papers, expert consensus articles, and guidelines for clinical practice in the field of cardio-oncology.5-9 Nevertheless, most of them represent the position of only one specialty, whether it is oncology/hematology or cardiology.

To optimize outcomes in cardio-oncology, a position statement with the four Scientific Societies involved in the care of patients with cancer or CV disease (Spanish Societies of Cardiology, Medical Oncology, Radiation Oncology and Hematology) was published.10 Most recommendations are based on expert consensus because scientific evidence in this area is scarce. We strongly recommend the development of multidisciplinary teams and the local adaptation of protocols, taking in consideration each center's needs and resources.

Cardiotoxicity risk assessment is fundamental in all patients exposed to cancer therapies (Figure 1). We emphasize the importance of CV risk factor optimization and give clear instructions on the thresholds to be reached in this high-risk population. We define cardiotoxicity using 53% as the lower limit of normal regardless of gender, as recommended by the American Society of Echocardiography and European Association of Cardiovascular Imaging.11,12 We consider the use of this definition highly relevant in their baseline evaluation because patients with borderline left ventricular ejection fraction (LVEF) (50-54%) are more prone to develop cardiotoxicity and would benefit from upfront initiation of modern heart failure (HF) therapy. Primary prevention with cardioprotective agents such as dexrazoxane, angiotensin-converting enzyme (ACE) inhibitors, beta-blockers (BBs), or statins cannot be generally recommended due to lack of scientific evidence.

Genetic testing has been proposed to identify individuals at high risk for anthracycline cardiotoxicity.13 Chest radiotherapy is considered only when at least some part of the heart is included in target volume. Most radiotherapy-derived complications occur at least 10 years after the initial exposure.14

The document reviews pros and cons of biomarkers and imaging modalities used in this area. We also provide a simple algorithm to be used during treatment with potential cardiotoxic drugs (Figure 2). Subclinical damage detected by biomarkers or subtle fall in contractility indexes should prompt early consultation with cardio-oncologist. Another proposed algorithm refers to thoracic radiotherapy when the radiation field includes the heart.

a Ideally, a specialist cardio-onco-hematology clinic.
b Re-evaluation of LVEF is recommended before treatment completion if the cumulative dose exceeds 240 mg/m2. In these patients, the LVEF should be regularly monitored until the end of treatment.
c In patients with low CV risk and without history of cardiotoxic treatment, determination of troponin levels before each cycle reduces the number of echocardiograms required and limits their use to symptomatic patients or those with troponin elevation. [3D: three-dimensional. CVRFs: cardiovascular risk factors. GLS: global longitudinal strain. NT-proBNP: N-terminal pro-B-type natriuretic peptide. TTE: transthoracic echocardiography.] Reprinted with permission from the Spanish Society of Cardiology.10

Once cardiotoxicity diagnosis is established, prompt treatment is of utmost importance. HF is the most feared complication, and once it is identified, careful weighing of cancer treatment continuation versus interruption or withdrawal should be individualized (Figure 3).15 Systemic arterial hypertension should be meticulously managed, especially when using anti-VEGF agents.16 ACE inhibitors, angiotensin receptor blockers, and BBs are the first-line drugs due to their ability to protect against HF development (Figure 4). The document also gives a short overview on other CV complications such as tachyarrhythmias or bradyarrhythmias; cardiac devices subjected to radiation; ischemic heart disease; myocardial, pericardial or valvular heart disease; peripheral venous or arterial disorders; and antithrombotic prophylaxis. Figure 5 depicts a proposed algorithm of management of patients with implantable devices subjected to radiation.

Figure 3: Algorithm for Treatment and Monitoring of Patients Receiving Cardiotoxic Agents and LVEF <53% 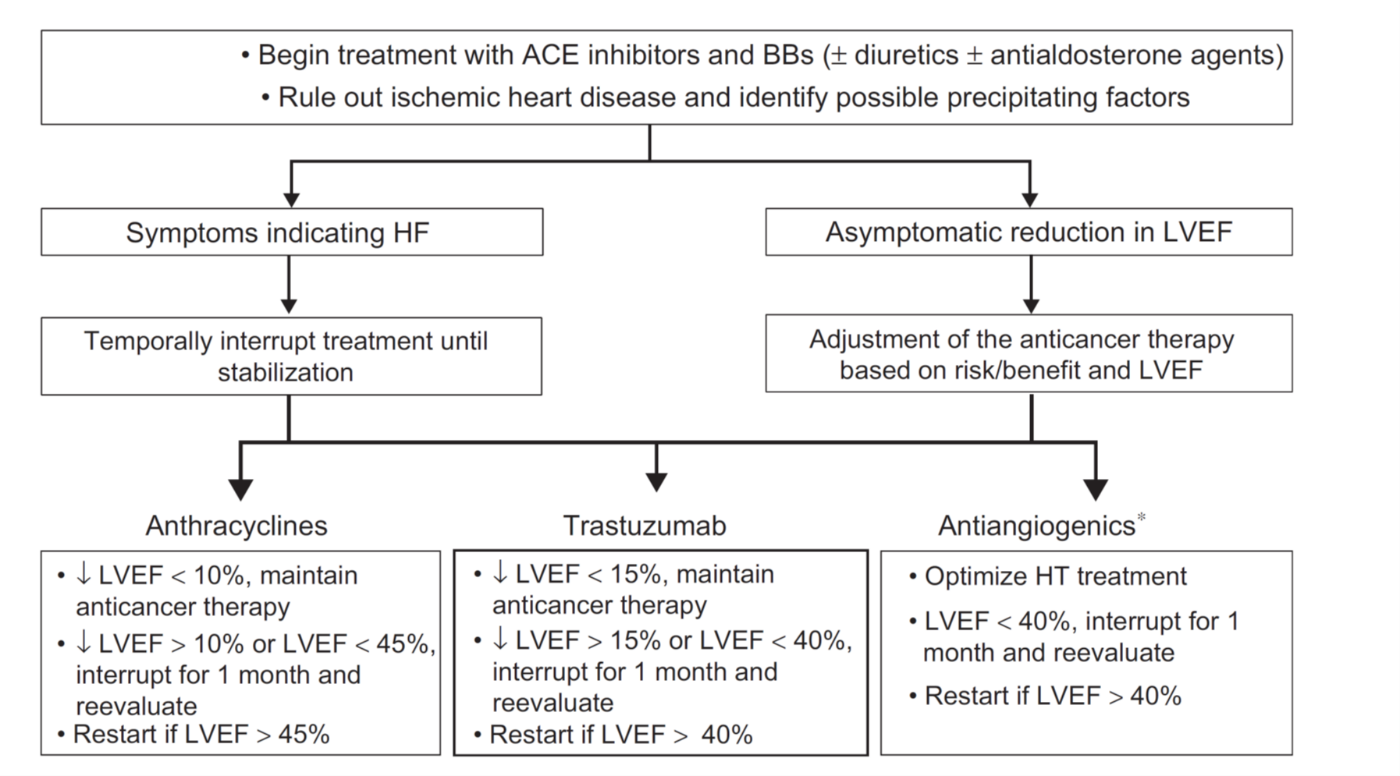 [HT: hypertension.] Reprinted with permission from the Spanish Society of Cardiology.10 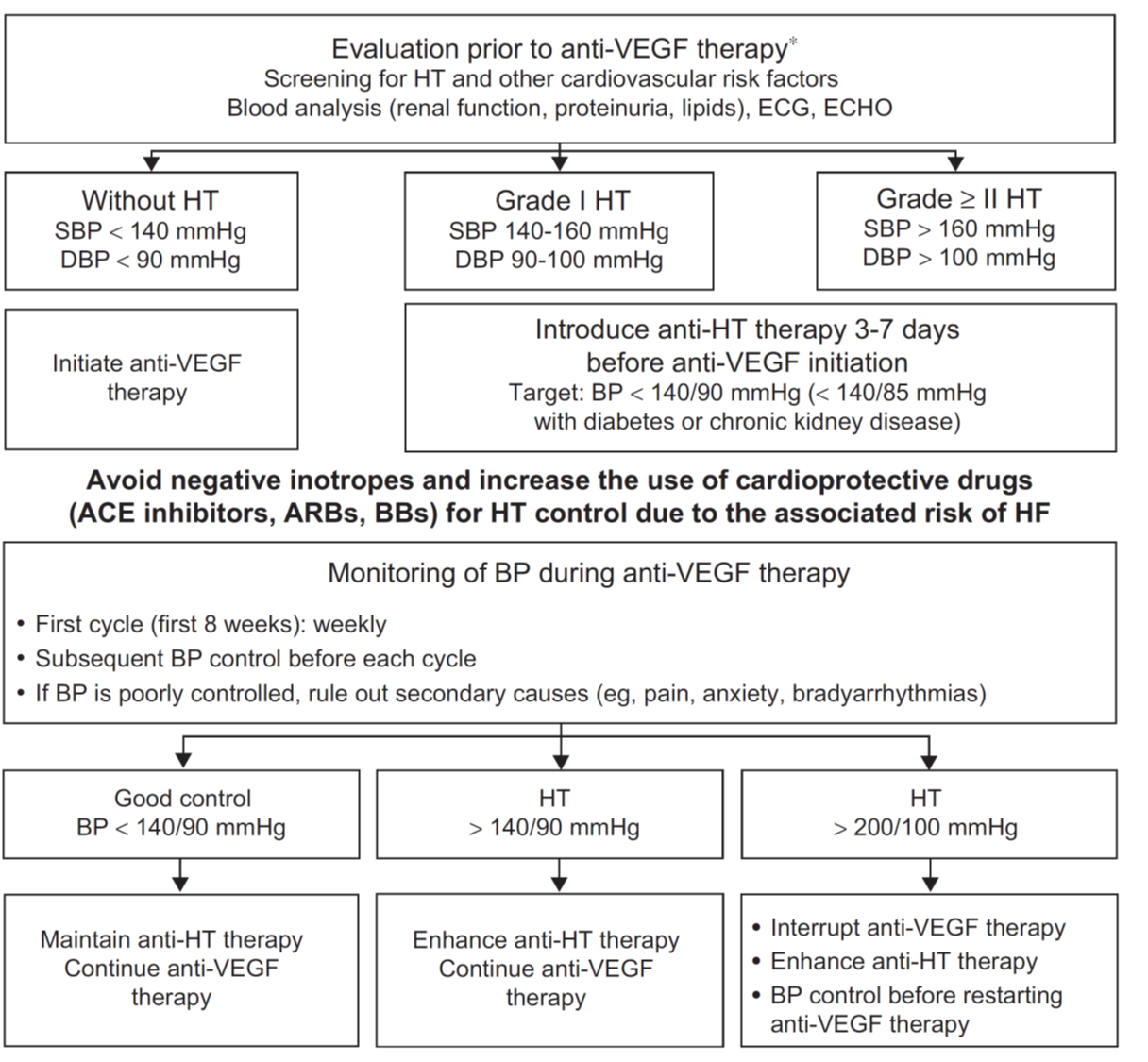 Figure 5: Algorithm Assessment and Follow-Up Protocol During Radiotherapy Administration to Patients With Implanted Devices Whose Target Volume Includes at Least Part of the Heart.

Long-term survivor surveillance should not be overlooked because individuals exposed to cancer treatments in childhood or early age are especially prone to CV disease.17 The combination of moderate- to high-dose anthracyclines and chest radiation is clearly deleterious. These individuals are categorized as high risk and should be assessed clinically and with biomarkers at least annually and with echocardiography at least every 5 years if asymptomatic.14,18 Closer surveillance is recommended if symptomatic or if abnormalities are revealed during follow-up.

Our firm belief is that myocardial damage induced by cancer therapies can be mitigated if detected in early phases. Consequently, an approach based on prevention, active monitoring, and early treatment is essential. Due to the continuously rising number of individuals with active or cured cancer, it is crucial to support the local adaptation of protocols and multidisciplinary collaboration. All patients with cancer are in need of proper CV care.

YOU ARE HERE: Home > Latest in Cardiology > The Practice of Cardio-Oncology in Spain: Position Statement From Scientific Societies Involved in Cancer and Heart Disease