Response to the most recent poll was low, but we got some good stats. In terms of use of paclitaxel-coated stents and/or balloons, approximately 20% of respondents have discontinued use, 40% of have reduced use, and 40% have not changed their use. Before we posted the poll, the US Food and Drug Administration (FDA) noted that they were following the results but did not recommend discontinuance of use. Interestingly, during the recent Cardiovascular Research Technologies Conference 2019 in Washington, DC, a mock FDA-style panel heard presentations from the FDA, industry, and investigators. A lot of discussion addressed the lack of evidence of risk for paclitaxel; however, data were not available regarding the impact of the excipients used in conjunction with the paclitaxel. There was not a definite consensus regarding risk. Many on the panel thought that a more complete meta-analysis using complete patient level data might bring a more definitive result, but there was much dissent, particularly from the statisticians on the panel. Most of the panel felt patients should be informed if a device was to be used. There was not an overwhelming consensus that the FDA should place a specific warning on the balloons. Also, there was a feeling that patient age and the potential for the limb salvage might be the most important factors in deciding whether to use a device. Subsequently, and likely too late to affect the poll results, the FDA noted that their data suggest that there is a signal for risk. How this knowledge might have affected the poll is unknown, as is how it may affect ongoing use.

As always, any comments are appreciated. My thanks to those who participated. 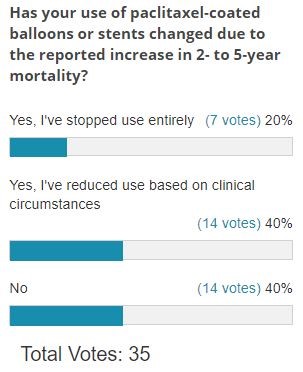 YOU ARE HERE: Home > Latest in Cardiology > Poll Results: Paclitaxel-Coated Stent/Balloon Use