Atrial fibrillation (AF) is characterized by irregular atrial activity that replaces normal sinus rhythm leading to loss of the regular atrial contraction during left ventricular diastolic filling.1 This condition increases the risk of thromboembolic events, heart failure and mortality.2 Among athletes, AF impairs cardiac efficiency, affecting exercise capacity and athletic performance. Here we describe a case of AF in an athlete and provide a brief overview of the condition and features specific for this highly active population.

41-year-old male, former US National Team rower and experienced marathon runner, presented with palpitations during rest and AF with a ventricular rate of 140bpm on Holter monitoring. During sinus rhythm his resting heart rate was 53. He had no significant past medical history but reported a family history of premature coronary artery disease. He denied taking performance enhancing supplements or caffeinated beverages. He endorsed consuming two glasses of wine per week without binge drinking. Lab investigations revealed no electrolyte or thyroid abnormalities. Echocardiogram revealed normal left atrial size (LAVI 23ml/m2), normal LV dimension (LVIDd 5.2cm), normal LV thickness (posterior wall 1.0cm, septum 0.9cm) and normal ejection fraction. His coronary calcium score was 0. As the patient was not planning to compete in the near future, he opted to reduce his level of recreational exercise. Three months after a moderate exercise 'dose', his symptoms entirely subsided and repeat Holter monitoring revealed no further atrial fibrillation.

The Association Between Exercise and AF

Several case control studies over the past two decades have revealed the complex relationship between endurance exercise and risk of developing AF. At low to moderate levels of exercise, there is a lower risk of AF.3,4 However, rather than a linear benefit derived from increasing levels of exercise, there appears to be a threshold beyond which increasing exposure is associated with an increased risk of AF.5-12 The most compelling evidence for a dose- and intensity- dependent association between endurance exercise and AF comes from a long distance competitive skiing event, Vasaloppet, in Sweden.12 In >50,000 skiers, the strongest predictors of AF were the number of races completed and race times. A meta-analysis including six case-control studies corroborated these findings with a five-fold increase in the risk of developing AF among older endurance athletes than non-athletes.13

Whether gender-specific differences occur as it relates to risk of AF and long-term endurance exercise is controversial and represents an active area of investigation.14 Unfortunately, it is difficult to derive meaningful conclusions in female athletes as the vast majority of existing literature pertains to male athletes, and sub-group analyses are often underpowered. Indeed, a number of studies have failed to demonstrate any increased risk of AF in female athletes.15-17 A meta-analysis including 103,298 highly active female participants (mean age ranged from 54 to 63 years) assessed the risk of AF among women who regularly undertake intense exercise.17 The pooled odds ratio was 0.72 (95% CI 0.57–0.88, P < 0.001), indicating that intense exercise was associated with a 28% lower risk of AF. However, in the studies included for analysis, 'intense' exercise was defined as either ≥4 hours of exercise per week, heavy physical workload, endurance exercise 3 times per week or activities requiring ≥6 METs‐hours/week. Therefore, high-level endurance athletes who truly live in the upper end of the exercise dose-response curve were not well represented in this analysis.17

Etiology of AF in Athletes

Although causality cannot be established from these studies, mechanistic pathways likely involve exposure to triggers in the setting of an arrhythmogenic substrate and modulators as outlined in Figure 1.

Atrial dilatation may act as an arrhythmogenic substrate, although the relationship between left atrial size and AF in athletes is more complex than in sedentary individuals.18 Atrial fibrosis may also enhance AF in athletes, as has been shown in mice exercise models.19 Modulating factors could include an increase in vagal tone, which itself increases the risk of AF as well as intrinsic conduction changes genetically mediated by ion channel remodeling.20-22 It is also possible that environmental and lifestyle triggers act as the 'final hit' in a dual or multi-hit hypothesis for AF in athletes. Stimulants, alcohol and performance enhancing drugs are all pro-arrhythmogenic, while viral illness and psychosocial stressors may be other salient triggers for AF in athletes.

Figure 1: Mechanisms That May Increase the Risk of AF in Athletes 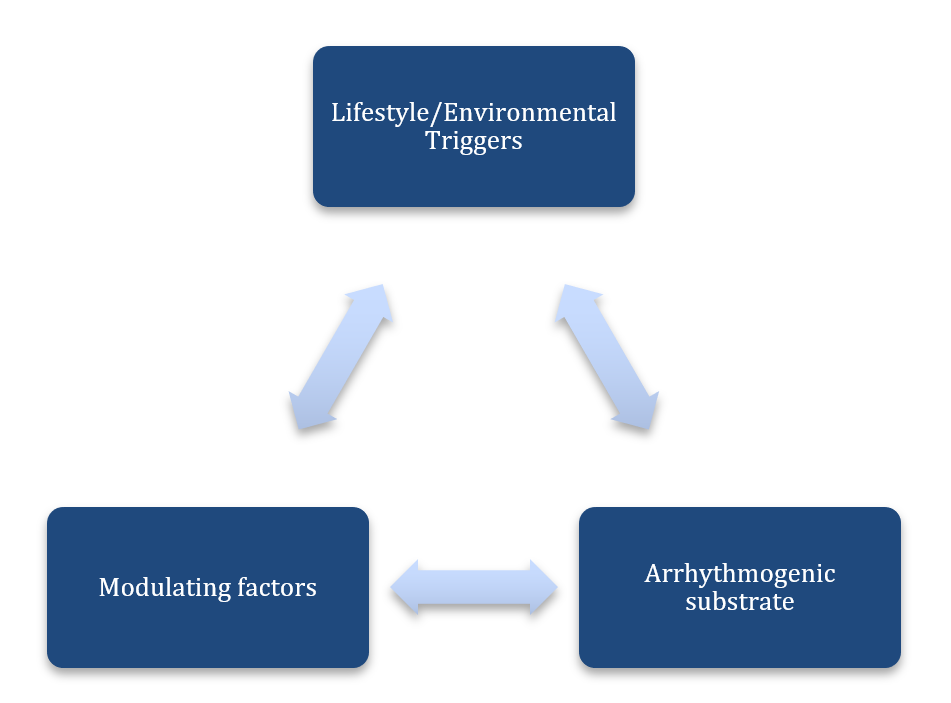 Clinical Approach to Athletes With AF

Many athletes, unlike their non-athletic counterparts, experience symptoms related to AF. In vagal mediated AF, episodes may interrupt sleep at nighttime and may occur post-exercise, particularly if using alternating heat/cold recovery therapy. A detailed history is warranted with particular emphasis on triggering factors and the relationship of exercise with AF, as well as traditional risk factors such as alcohol intake. Specific to athletic individuals, it is important to enquire about use of stimulants, anabolic steroids and other performance enhancing drugs. Some reports also suggest that exercise induced esophageal reflux may be important in AF and as such should be appropriately explored.23

While AF is typically recorded by a 12-lead electrocardiogram (ECG), modern wearable devices are increasingly becoming a tool used for AF detection. As such, it is important to obtain the initial recording documenting the athlete in AF. Subsequent investigations include a resting 12-lead ECG as well as prolonged remote monitoring. Other methods of ECG monitoring include 'patch' devices, smartphone enabled rhythm recorders and smartwatches, which may sometimes be more appropriate for athletes compared to traditional Holter monitors. Blood pressure measurement is crucial to rule out the presence of hypertension. Laboratory investigations are important to elucidate whether electrolyte abnormalities, often related to exercise and dehydration or underlying thyroid disease, may act as inciting reversible factors. Exercise testing defines the maximal heart rate and may unmask exercise induced symptoms and arrhythmias.

Management of AF in Athletes

Due to the paucity of data investigating athletes with AF, many of the current recommendations are based upon expert consensus and extrapolation from evidence in non-athletes. Similar to non-athletes, the mainstay of management is prevention of symptoms with a rhythm or rate control strategy, protection from thromboembolic risk and modification of risk factors. However, there are three unique challenges when faced with an athlete with AF. First, the chosen therapy should control AF without impairing exercise performance. Second, this therapy must comply with the list of prohibited substances by the athlete's respective sporting body. Third, consideration of the optimal anti-coagulation strategy must include assessment of the training-related bleeding risk.

If the risk of atrial fibrillation increases with increasing exercise levels, it is plausible that a reduction in exercise training will reduce the incidence of recurrent AF. Preliminary data from endurance trained animal models support this theory.24 The position paper from the European Society of Cardiology recommend a total detraining period of up to two months for restoration and maintenance of sinus rhythm. However, this is rarely well received by the athlete and may be unacceptable at the elite level.25 By contrast, the American Heart Association and American College of Cardiology recommend athletes with well tolerated, self-terminating low-risk AF may participate in all competitive sports without therapy (Class I; Level of Evidence C).26

In our practice, we prefer a rhythm control strategy as athletes are often symptomatic in AF despite adequate rate control. Additionally, rate control is often limited by physiologic resting sinus bradycardia. We prefer a Class IC antiarrhythmic strategy such as flecainide as a 'pill-in-the-pocket' approach. Class IC anti-arrhythmic agents reduce the risk of AF recurrence more so than beta-blockers and have a better safety profile than class IA drugs in non-athletes.27 Ideally the first dose is taken under direct observation in the hospital in order to mitigate against the risk of adverse events, which occurs in roughly 5%.28 Although not well explored in athletes, disopyramide (Class IA), through its anticholinergic effect, may provide benefit in vagal mediated AF in athletes. However, until further studies demonstrate its benefit in this cohort, we remain cautious in its use due to an association with a small increase in mortality for paroxysmal AF.27

Pulmonary vein isolation by means of radiofrequency catheter ablation is an established treatment for AF in non-athletes and may be a useful option for athletes with recurrent AF refractory to medical treatment or intolerant of medical therapies. In a 3-year follow-up of 94 predominantly male athletes with paroxysmal AF, Koopman et al. showed a similar rate of AF recurrence between athletes and controls.29 In this study, non-endurance athletes required more ablations than endurance athletes within the three year period.29 For athletes who undergo an ablation procedure, they can typically return to play after 2-12 weeks.30 We direct the reader to the following references that provide an overview in support and against catheter ablation for AF in athletes, respectively.31,32

Similar to non-athletes, thromboembolic risk is paramount in the management of AF in athletes, regardless of whether a rate- or rhythm control strategy is preferred. The CHA2DS2-VASc risk stratification scheme reliably identifies 'lone' AF patients who are at truly low risk of thromboembolic events.33 Therefore, athletes who score zero can be adequately reassured without necessitating anti-coagulation. In those that warrant anticoagulation, it is important to weight the benefit of anticoagulation against the bleeding risk related to training. When conventional risk factors are present in athletes who continue to train, an attempt should be made to reverse or modify these rather than view them as an indefinite reason for anticoagulation. Although not well documented in athletes, left atrial appendage occlusion may be useful in those unable to take anticoagulation therapy.

AF in athletes has been well documented and is likely mediated by processes distinct to AF observed in the general older population. In the case presented in this review, his prior high-level exposure to endurance exercise may have led to the development of AF. Athletes present unique challenges that require an open dialogue of the evidence behind different treatment strategies and shared decision making to provide the optimal therapy for a given athlete. We welcome further research in this field to better inform our guidelines and allow us to provide more superior cardiovascular care for the athletic heart.

YOU ARE HERE: Home > Latest in Cardiology > Atrial Fibrillation in Competitive Athletes