Patients with critical limb ischemia (CLI) undergoing peripheral vascular intervention (PVI) may be more likely to experience in-hospital major adverse cardiovascular and limb events, according to a review letter published in the Journal of the American College of Cardiology.

The researchers also examined the proportion of patients with CLI vs. claudication who received guideline-directed medical therapy at discharge.

At discharge, patients with CLI were less likely than those with claudication to receive guideline-directed medical therapy, including aspirin, P2Y12 inhibitors, angiotensin-converting enzyme inhibitor and/or angiotensin receptor blocker, and statins.

According to the researchers, the findings show that patients with CLI are more likely to experience in-hospital MACE and MALE and demonstrate underutilization of guideline-directed medical therapy in these patients. They conclude that national quality improvement efforts around PVI are necessary to improve care for the CLI patient population.

The Kardashian Index and Medical Publications?

Many of us now first learn about medical journal articles through our social media feed. A series of manuscripts in JACC: Case Reports look at the impact of social media and a ratio known as the "Kardashian index," or "K-index," referring to the relationship between the impact factor and Twitter followers.

"Social media has changed the way we communicate, including the dissemination of novel scientific findings to physician colleagues, allied health care professionals, and patients," write Shahzeb Khan, MD, et al., in the viewpoint The Kardashian Index of Cardiologists - Celebrities or Experts?

Click here to read these articles and more, including a perspective on palliative care in cardiology, along with a mini focus issue on myocardial and pericardial inflammation, a second mini focus on electrophysiology, a new Technical Corner and a wide variety of clinical cases.

Bookmark JACC.org/CaseReports and sign-up for journal emails for notices on manuscripts published each week and to listen to podcasts.

The annual list of the top 100 papers from the previous year, personally selected by Editor-in-Chief Valentin Fuster, MD, PhD, MACC, has been published in JACC.

Original investigations and review articles from 15 distinct specialties are included in his picks, along with the most accessed or downloaded papers and those selected by JACC Editorial Board members.

Click here for the online listing, with the abstract and central illustration for each pick. Or look for the link in Dr. Fuster's Corner at JACC.org.

Is Long-Term Increases in TMAO: Associated With Higher CHD Risk?

Reducing animal product intake and following a primarily plant-based diet may decrease the risk of cardiovascular disease by minimizing the adverse effects of trimethylamine N-oxide (TMAO) – a gut-microbiome associated with increased risk of coronary heart disease (CHD) – according to research published in the Journal of the American College of Cardiology.

Results showed that women who developed CHD had higher levels of TMAO, higher body mass index and more family history of myocardial infarction, and they did not follow a healthy diet consisting of a higher intake of vegetables and lower intake of animal products. Women with the largest increases in TMAO levels across the study had a 67% higher risk of CHD.

At the first blood sample collection, the study authors did not find differences in TMAO levels between the CHD and control participants. However, TMAO levels examined in the collection taken 10 years later were significantly higher in the participants with CHD. Every increase in TMAO was associated with a 23% increase in CHD risk. This association remained after controlling for demographic, diet and lifestyle factors, confirming the link between higher TMAO levels and CHD risk.

"Our findings show that decreasing TMAO levels may contribute to reducing the risk of CHD, and suggest that gut-microbiomes may be new areas to explore in heart disease prevention," says Lu Qi, MD, the study's senior author. Moving forward, the study authors also support the need for further research to confirm the findings in both men and a more representative population of the U.S.

In an accompanying editorial comment, Paul A. Heidenreich, MD, MS, FACC, and Petra Mamic, MD, explain that, "The findings of the study provide further evidence for the role of TMAO as a predictive biomarker for heart disease and strengthens the case for TMAO as a potential intervention target in heart disease prevention." They add the results "should encourage us to continue to advocate for a more widespread adoption of healthy eating patterns."

A 64-year-old woman presented to the emergency department with repeated "bleeding in her neck" for two years. She was hemodynamically stable with no active signs of infection.

She reported no other symptoms, including those of heart failure. She was heavily sedentary and engaged in self-limitation.

On physical examination, there was a small yet actively bleeding cutaneous orifice in the suprasternal notch. Additionally, she had a 2/6 systolic crescendo-decrescendo murmur on auscultation.

In this case published in JACC: Case Reports, the authors describe the endovascular management of this woman who developed a bleeding suprasternal fistula after conventional aortic valve replacement. The patient's condition was considered inoperable. A customized stent attached to a transcatheter valve was successfully used to treat the individual, this being the first-in-human case of the promising Endo-Bentall procedure.

At nine months, the patient was alive, without evidence of myocardial infarction, asymptomatic, and well. Control CT (at four months) shows sustained results.

What's hot off the press in the just-published issue of JACC: CardioOncology? A primer on cardiovascular outcomes and management related to CAR T Cell Therapy; a state-of-the-art article on using behavioral economics and technology to improve outcomes in cardio-oncology; and an international perspective as well as a Leadership Page on advancing cardio-oncology in China.

Among the topics addressed by original research papers in this issue are: 3D echo for early detection and prediction of anthracycline-induced right ventricular cardiotoxicity; longitudinal changes in echo parameters of cardiac function in survivors of childhood cancer; and use of plasma hepatocyte growth factor for diagnosis and prognosis in light chain and transthyretin cardiac amyloidosis.

And finally, the design of PRONOUNCE, the first prospective, randomized trial with a primary endpoint of cardiovascular outcomes for two different treatments for prostate cancer.

Don't miss a viewpoint on the unrecognized trauma of surviving cancer. And Editor-in-Chief Bonnie Ky, MD, MSCE, FACC, discusses the role of the physician in the patient-physician relationship.

Kalyanam Shivkumar, MD, PhD, FACC, has been named the next editor-in-chief of JACC: Clinical Electrophysiology. Shivkumar is a physician scientist who serves as the director of the UCLA Cardiac Arrhythmia Center, director of the university's electrophysiology programs, and as a professor of medicine (cardiology), radiology and bioengineering.

"It is a rare honor and a privilege to serve as the editor-in-chief of JACC: Clinical Electrophysiology," says Shivkumar. "Our editorial team looks forward to seeking and publishing the very best science in the field of cardiac arrhythmias." The first issue under Shivkumar's editorship will publish in July 2020. 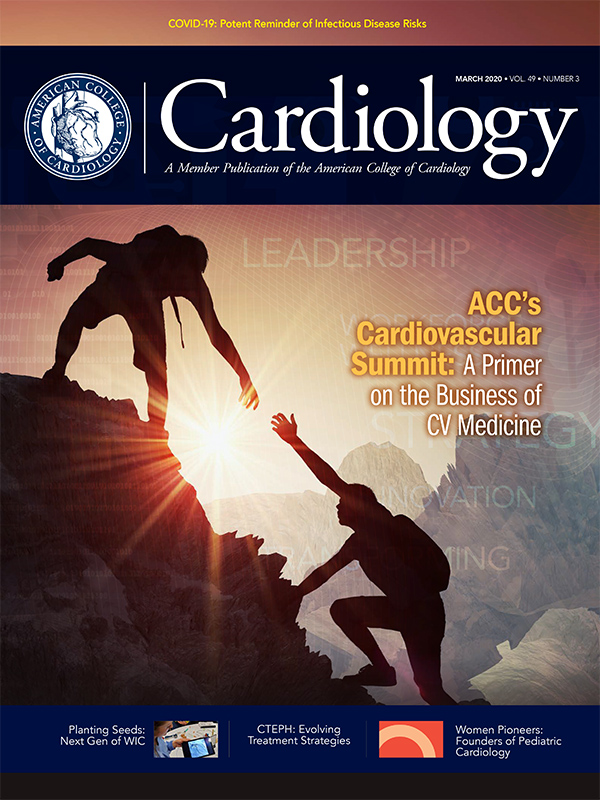