The most important limiting management factor in euglycemic goals in patients with diabetes [Figure 1], is hypoglycemia, "all episodes of an abnormally low plasma glucose concentration that expose the individual to potential harm".1 We herein briefly review the manifestations of hypoglycemia with emphasis on severe hypoglycemia, and the controversial relationships to cardiovascular (CV) events (including death).

Figure 1: Manifestations of Hyperglycemia and Hypoglycemia 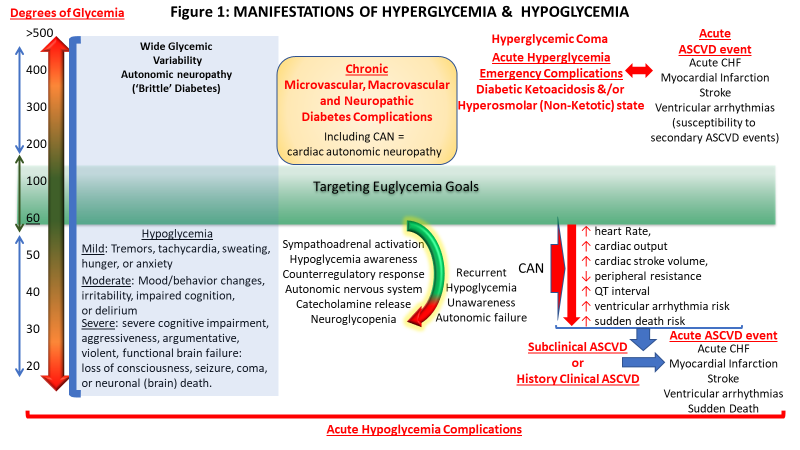 A blood glucose (BG) ≤ 70 mg/dL is classified as an alert value; a BG <54 mg/dL is clinically significant biochemical hypoglycemia; and severe hypoglycemia is defined as any level associated with severe cognitive impairment requiring external assistance.2 Mild symptoms of hypoglycemia can include, tremor, sweating, hunger, tachycardia, a result of sympathoadrenal and parasympathetic responses, are usually annoying, but well tolerated, but if not managed, can progress to moderate symptoms of anxiety, irritability, confusion, or delirium and to severe hypoglycemia with loss of consciousness, seizure, coma, or even death.

Whether severe hypoglycemia is a 'risk marker' or a 'direct causal effect' for adverse CV outcomes is controversial. The Action to Control Cardiovascular Risk in Diabetes (ACCORD) study,3 was designed to determine whether a therapeutic strategy targeting A1C levels to a normal goal, i.e. <6.0%, would reduce the rate of CV events, relative to patients with A1C levels ranging 7.0 to 7.9%. The ACCORD patients (n=10,251) with mean 10 years-duration of type 2 diabetes mellitus (T2DM), previous CV events (35%), or significant CV risk, and A1C ≥7.5% were randomized to 'intensive glycemic therapy' or 'standard less aggressive therapy' groups, for a planned 5.6 years follow-up. The primary outcome was the 3-point composite of CV death, nonfatal MI, or non-fatal stroke. ACCORD was halted at 3.5 years because, relative to the standard therapy group, the intensive therapy group experienced a significant 35% increase in the CV death component (p = 0.02) and a significant 22% increase in all-cause mortality (p=0.02); thus, identifying potential harm of intensification of glycemic control in this cohort. Indeed, the annual 3-component atherosclerotic cardiovascular disease (ASCVD) primary outcome occurred in 2.11% of the intensive therapy group and 2.29% of the standard therapy group, consistent with 10-year, 3-component, ASCVD risk for both groups exceeding 20%, or 'very high' risk. The intensive therapy group did experience a non-significant 10% ASCVD risk reduction trend (p=0.16), driven by a significant 24% risk reduction in the nonfatal MI component (p = 0.004), but no significant difference in nonfatal stroke (p=0.74).3

In a meta-analysis of several pre-ACCORD studies, when stratified according to the presence of only one abnormal measure associated with cardiac autonomic neuropathy (CAN) (i.e. postural blood pressure (BP), or RR variability, or heart rate variability at rest, or during deep breathing) versus ≥2 abnormalities, the relative mortality risk was 1.20 (p = 0.03) versus 3.45 (p<0.001), respectively.8 The presence of CAN, a downstream effect of chronic long-term hyperglycemia, was investigated as a contributing factor to the higher mortality risk in the intensive glycemia arm of the ACCORD trial. In fully adjusted analyses, participants with baseline CAN were 1.55-2.14 times more likely to die as participants without CAN (p < 0.02), and independent of assignment to intensive therapy or conventional therapy.9 The potential mechanisms of chronic hypoglycemia unawareness, hypoglycemia-associated autonomic failure and severe hypoglycemia-mediated death have been exquisitely described.10-12 Furthermore, susceptibility to cardiac dysrhythmias occurs in those with established ASCVD, diabetes duration, and CAN, and has been strongly associated with increased mortality.9,13,14

The Action in Diabetes and Vascular Disease: Preterax and Diamicron-MR Controlled Evaluation (ADVANCE),15 ADVANCE study enrolled middle-aged and older adults with type 2 diabetes (n=11,140) with pre-existing microvascular disease (10.4%) or macrovascular disease (32%) or a risk factor for vascular disease. Relative to the ACCORD trial, ADVANCE participants had a 2-year shorter duration of diabetes at 8 years (vs. ACCORD at 10 years), lower baseline A1C at 7.2% (vs. ACCORD at 8.1%), and less patients taking insulin (40.5% in the intensive group and 24.1% in the standard group (versus ACCORD 73% and 58%, respectively). Notably, severe hypoglycemia in ADVANCE occurred much less frequently at 2.7% in the intensive vs. 1.5% in the control, far less then was observed in the ACCORD trial (16%) or the Veterans Affairs Diabetes Trial (VADT) (21%). In ADVANCE, all-cause mortality was reduced by 7% (8.9% in the intensive control group and 9.6% in the standard control group) and CV death was reduced by 12% in the intensive therapy group, both non-significantly.

In the relatively smaller VADT,16 participants (n=1791), mean age 60 years, 11.5 years diabetes duration, with baseline A1C 9.4%, predominantly high-risk, older males (97%); 40% prior CVD events, the primary outcome was a major adverse cardiovascular events (MACE) composite of myocardial infarction (MI), stroke, death from CV causes, heart failure, surgery for vascular disease, inoperable coronary disease, and amputation for ischemic gangrene. At median 5.6-year follow-up, the between-group A1C difference was 1.5%; standard therapy group at A1C 8.4% versus intensive-therapy group at 6.9%. The intensive therapy group had a non-significantly reduced trend of 12% (p=0.14) for the primary outcome and a non-significantly increased trend 7% (p=0.62) in death from any cause. There was an increased incidence of severe hypoglycemia in the intensive treatment group, predicted in both groups by increased duration of diabetes, insulin treatment at baseline, low body mass index (BMI), previous cardiovascular events, and high albumin-to-creatinine ratio.17 Prospective coronary artery calcium (CAC) Agatston scoring done in 301 participants in the VADT, demonstrated that those with CAC score >100 had no significant ASCVD event benefit from intensive glycemic control, while those with CAC score <100 had a 10-fold greater reduction in events with intensive glycemic control,18 consistent with susceptibility to events among patients with known clinical, or subclinical, ASCVD.

Several studies identified severe hypoglycemia to be one of the strongest predictors of ASCVD events, adverse clinical outcomes, and mortality in those with T2DM.5,17,19,20-25 Several studies and analyses have demonstrated significantly increased risk of ASCVD events in a temporal fashion ranging from shortly after to up to 1.5 years following a single severe hypoglycemia episode.2,10,23,26-29 Participants with diagnosed diabetes (n=1209) from the Atherosclerosis Risk in Communities (ARIC) study, had prospective CV events and deaths captured from 1996 through 2013; severe hypoglycemia was associated with 3-year cumulative congenital heart disease (CHD) (HR 2.02), all-cause mortality (HR 1.73), CV mortality (HR 1.64), and cancer mortality (HR 2.49).29

The sympathoadrenal catecholamine release response during hypoglycemia [Figure 1] may induce dysrhythmias/arrhythmias and increase cardiac workload and serve as mechanistic evidence that links hypoglycemia to cardiovascular risk.23 Hypoglycemia causes a transiently prolonged corrected QT interval and increased QT dispersion.5,25,30 QT prolongation is a strong risk factor for severe ventricular arrhythmias and sudden death.25 When the brain becomes neuroglycopenic and the central autonomic nervous system is stimulated, the sympathoadrenal activation, as the most important part of the counterregulatory response to hypoglycemia,25 leads to increased heart rate, cardiac stroke volume, decreased peripheral resistance and provokes a substantial rise in myocardial contractility and cardiac output.

Hypoglycemic events trigger inflammation with release of C-reactive protein (CRP), IL-6, and vascular endothelial growth factor (VEGF), and induces platelet and neutrophil activation. The prothrombotic effect of low BG levels from catecholamine release, increases blood viscosity and promotes platelet activation/aggregation, leukocyte mobilization and coagulation.24,25 Against a background of endothelial dysfunction and reduced vasodilation; sympathetic activity may be the underlying mechanism leading to hemodynamic changes that cause destabilization of atherosclerotic plaques.31

Any, or all, of these pathophysiological responses may contribute to CV event susceptibility, especially in those individuals with long-standing diabetes, established ASCVD, and cardiac muscle dysfunction. Despite a desirable early attainment and maintenance of euglycemia to prevent acute and chronic complications [Figure 1], one should clearly understand the burden of acute severe hypoglycemia episodes. In addition, in patients with chronic hypoglycemic unawareness, the challenge is incessant and contemporary hypoglycemic episode avoidance strategies, which are critical as an integral component of the management of patients with diabetes; these discussions were beyond the scope of this brief review.