Long before annual meetings for cardiology were in vogue, Moliere said: "The greater the obstacle, the more glory in overcoming it."

Guided by Mr. Moliere's words, the ACC and contributors from all over the world came together to complete (in an incredibly short time) a unique learning platform for us all.

The teaching opportunities inherent in the annual major ACC get-together, this year joined by the World Congress of Cardiology, went forward.

All this content will continue to be available online for three months. Arguably this Herculean effort, in which so many contributed, gives us all an insight into what future congresses might/will become.

The "late-breakers" this year continued to garner the most attention. Here's a listing (in random order) along with a short version of the major take-home messages of a selected few that will change clinical therapeutic strategy.

TICO (Ticagrelor With or Without Aspirin in Acute Coronary Syndrome)

Ischemic outcomes in both groups were similar; bleeding outcomes were greater in the dual therapy group – with monotherapy actually having superior outcomes rather than the anticipated noninferior outcomes.

The outcome is supported by two substudies of the TWILIGHT trial (TWILIGHT-DIABETES and TWILIGHT-COMPLEX).

Vericiguat is an oral guanylate cyclase stimulator that enhances the cyclic GMP pathway. It works by mediating physiological and tissue-protective effects, including smooth muscle relaxation and inhibition of smooth muscle proliferation, leukocyte recruitment, and platelet function.

In VICTORIA, a phase 3 trial, patients with heart failure and a recent worsening event (heart failure hospitalization or intravenous diuretic use and elevated natriuretic peptides) were tested with the addition of vericiguat.

This was a high-risk heart failure group. The composite of cardiovascular death or repeat heart failure hospitalization occurred in a bit more than one-third of patients in both groups, but with a slightly lower incidence (38.5% vs. 35.5%) in the vericiguat group, although the outcome was driven mostly by repeat hospitalization, not cardiovascular death.

Side effects, mostly hypotension, were few.

In this large study of >5,000 patients, the outcome was statistically significant and might well add another class of drugs to caring for patients with high-risk heart failure and a recent heart failure event. Vericiguat is a novel drug with a unique pathway of therapy that opens the door to potentially similar drugs of this type.

VOYAGER-PAD (Efficacy and Safety of Rivaroxaban in Reducing the Risk of Major Thrombotic Vascular Events in Subjects with Symptomatic Peripheral Artery Disease Undergoing Peripheral Revascularization Procedures of the Lower Extremities.

In this study of peripheral arterial disease treated either with surgery or with transcatheter techniques (surgical revascularization 35%; endovascular or hybrid approach 77%) patients were randomized to aspirin alone or aspirin and rivaroxaban after their intervention.

Efficacy (acute limb ischemia, major amputation for vascular causes, MI, ischemic stroke or cardiovascular death) – occurred in 508 patients in the rivaroxaban group and in 584 patients in the placebo group with a p value = 0.009 for the difference.

For both surgeons and endovascular physicians caring for patients with severe peripheral vascular disease, the addition of rivaroxaban to aspirin after intervention is a beneficial strategy.

The initial AUGUSTUS trial demonstrated that a placebo vs. aspirin resulted in less bleeding in patients with atrial fibrillation and a recent ACS and/or PCI taking a P2Y12 inhibitor and either apixaban or vitamin K antagonist.

A new retrospective analysis presented during ACC.20/WCC looked at the risk-benefit trade-off of aspirin vs. placebo in addition to either apixaban or a vitamin K antagonist at 30 days and at six months.

The short version of the results is this: aspirin increases severe bleeding and decreases ischemic events by about the same amount up to 30 days.

Ischemic outcomes after 30 days were similar in the two groups. The take-home message is this: in patients with atrial fibrillation undergoing a PCI, use of aspirin for up to 30 days in addition to a P2Y12 inhibitor or oral anticoagulant results in an equal trade-off between an increased risk of bleeding and reduced risk of an ischemic event. After 30 days, aspirin use is associated with an increase in bleeding with no reduction in ischemic events.

Though not strictly a "cardiology" or "cardiac surgery" trial, PRONOMOS asked the question whether rivaroxaban (10 mg daily) was better than injected enoxaparin after nonmajor lower limb surgery for prevention of deep venous thrombosis or venous thromboembolism (think broken ankles, fibular or tibial fractures, etc., especially in young people in whom such surgery and subsequent immobilization is common).

The primary complex efficacy outcome (symptomatic distal or proximal deep vein thrombosis, pulmonary embolism, related death during the study, asymptomatic proximal venous thrombosis at the end of treatment) – occurred in small numbers (4/1,661 in the rivaroxaban group and 18/1,640 patients in the enoxaparin group).

The study was terminated early because of slow enrollment and the cost of replacing the outdated study drug. Nonetheless, rivaroxaban was not only noninferior but actually superior (p=0.01 for superiority) to enoxaparin.

Importantly, bleeding rates did not differ between the rivaroxaban and enoxaparin groups.

Would patients with lower limb immobility after surgery prefer a superior drug taken orally or a daily enoxaparin injection?

Seems like a silly question after the results of this trial. 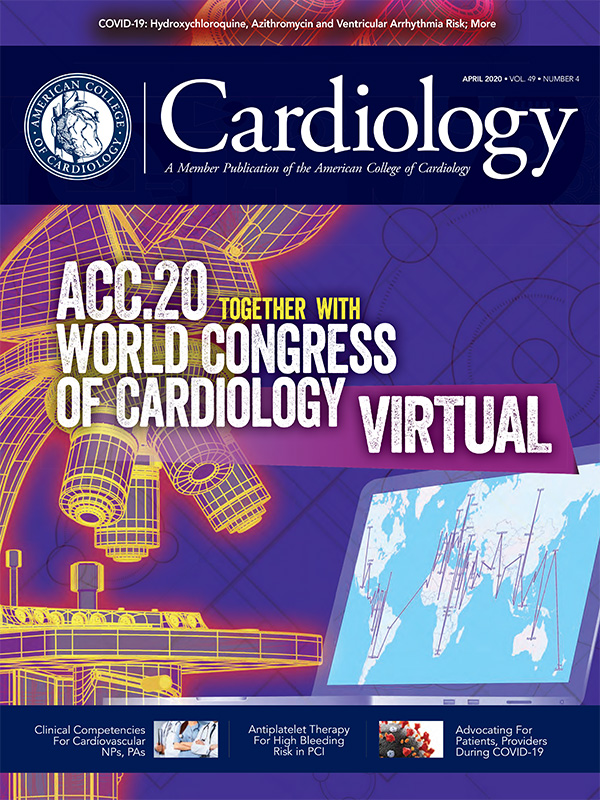 YOU ARE HERE: Home > Latest in Cardiology > Editor's Corner | Virtual ACC.20/WCC – And a Real Wrap-Up