Racial Disparities in Hypertension Prevalence and Management: A Crisis Control?

The 2017 ACC/AHA hypertension guidelines lowered the blood pressure threshold for diagnosis of stage I hypertension to 130-139/80-89 mm Hg.1 This change resulted in a substantial increase in the prevalence of hypertension from ~32% to ~46% in the United States (US) adult population.2 Although the new guidelines comprehensively address how to define, measure, and treat high blood pressure, management of hypertension in special patient groups has not been systematically addressed.

In this analysis, we will review the importance of race and ethnicity on hypertension prevalence, diagnosis and treatment, disparities in care leading to poor control rates, genetic factors impacting risk of high blood pressure and response to therapy, and controversies surrounding accurate cardiovascular risk assessment.

1. Racial/Ethnic Disparities in Prevalence and Management of Hypertension

There are significant differences in blood pressure prevalence and control rates based on race/ethnicity.3 National surveys such as the US National Health and Nutrition Examination Survey (NHANES) have highlighted these differences. Non-Hispanic blacks (NHB) have significantly higher rates of hypertension compared to non-Hispanic whites (NHW), while Hispanics and non-Hispanic Asians (NHA) have lower rates than both groups.2 In an NHANES survey,3 hypertension control rates among non-Hispanic white adults (55.7%) was significantly higher than NHB (48.5%), NHA (43.5%), and Hispanic (47.4%) adults.

While these surveys are informative from a national health perspective, recent studies have identified significant heterogeneity in the prevalence of hypertension among specific ethnic/racial groups demonstrating a need to disaggregate data to refine high-risk populations. A New York City Health and Nutrition Examination Survey study found substantially higher hypertension rates for Asians (38.0%) and Hispanics (33.0%) compared to NHWs (27.5%).4 The prevalence was higher for South Asian (43.0%) versus East/Southeast Asian adults (39.9%). Hypertension rates were highest for Dominicans (39.4%) compared to Puerto Ricans (34.2%) and Central/South Americans (27.5%).4

Heterogeneity in age-adjusted hypertension prevalence among Asian subgroups was confirmed in a Northern California survey that found hypertension rates ranging from 30.0% in Chinese women to 59.9% in Filipino men.5 Most minority subgroups had lower or similar rates of hypertension compared to NHWs, except for Filipinos and NHBs whose rates were significantly higher even when adjusted for demographic and traditional risk factors. Moreover, this study highlighted that Asian Americans and NHBs were more likely to be treated for HTN compared to NHWs, however adequate blood pressure control was lower among Filipino women (OR 0.82, 99%, CI 0.70–0.96) and lowest for NHB men (OR 0.73, CI 0.58–0.91).5

Causes of ethnic/racial inequalities are multifactorial, but substandard insurance coverage and poor access to health care are primary determinants of disparities associated with poor hypertension control.7 Additional gaps exist in the use of antihypertensive therapies – highest for NHWs and lowest for Hispanics.7 Recent trends have shown an increase in the use of preferred therapies (e.g., diuretics, calcium channel blockers) in NHBs; however, use of multiple antihypertensives in this population increases the risk of polypharmacy and contributes to lower medication adherence rates.7,8

Since the 1970's, the influx of immigrants into the US has comprised of not only Latin Americans, but also individuals from sub-Saharan Africa, the Middle East, and Asia. This is important given the high prevalence of hypertension among these groups.9 Newly arrived immigrants are more likely to have poor insurance coverage and limited access to health care which are major determinants of hypertension disparities. Additionally, evidence suggests that length of US residency increases immigrant risk for developing hypertension.10 As such, novel models of care and approaches to treating hypertension are essential to improving these disparities in blood pressure control rates. An excellent example of a culturally-specific, community-based intervention program is a recent study of 319 black men in Southern California who were screened by black barbers for high blood pressure with assistance from pharmacists and were able to achieve almost 90% blood pressure control at 6 months.

Ethnic/racial differences and their impact on blood pressure and vascular disease are still not fully understood. The key to understanding these disparities may lie with the underlying pathophysiology of the disease process and response to therapy. Blood pressure may be fundamentally impacted by vascular changes in arterial stiffness. The majority of hypertension studies are carried out in adulthood – an age where vascular remodeling such as loss of arterial elasticity and reduced compliance may have long begun.11

Racial differences in 24-hour ambulatory blood pressure monitoring patterns have been previously described. NHBs have higher nocturnal blood pressures and less circadian 'dipping' compared to their NHW counterparts.12,13 A 15-year longitudinal study involving young adults14 showed that in NHBs, nocturnal blood pressure dipping is reduced by age 10, with an increased rate of blunted dipper response that commences during adolescence. These data support the mounting evidence of early onset and rapid acceleration of vascular changes in NHBs and its association with an increased risk for cardiovascular disease (CVD). The trend of reduced nocturnal dipping in NHBs is not seen in individuals of African heritage residing outside the US and suggests plausible genetic and environmental interactions as the basis for this clinical observation.15

Most data studying molecular and biological responses to elevated blood pressures are observational and often derived from animal models.11 Variability in sodium retention and nocturnal blood pressure dipping as well social factors including early life stressors (e.g. reduced access to health care and poverty), have been hypothesized to explain the heterogeneity of blood pressure rates and control among different ethnic groups.13 Furthermore, body mass index (BMI) disparities exist among racial groups that correlate with risk of hypertension. In a recent study, the BMI-adjusted prevalence of hypertension was found to be significantly greater in NHBs as compared to NHWs and Chinese Asians.16 Recently published data found that the mean BMI for NHBs is higher than NHWs during childhood and continues through adolescence in both genders.14,17,18

In addition, racial differences in the intake and regulation of potassium and sodium have been evaluated with stimulating, but inconclusive results.19 Long term hypokalemia has been correlated with development of arrhythmias and hypertension. In the Atherosclerosis in Risk Communities (ARIC) study, a statistically significant association was discovered between ethnicity and unprovoked hypokalemia. Hypokalemia was much more prevalent in NHBs (odds ratio = 5.3; 95% CI = 3.6, 7.7) in fully adjusted statistical models of association.19 Although NHBs have similar sodium sensitivity, the responsive blood pressure change to salt loading is markedly different among NHBs compared to NHW counterparts.20

Interactions between genetic and social factors leading to body weight changes, differences in fat distribution (visceral versus subcutaneous), sodium and potassium balance/handling, and nocturnal diuresis may all contribute to the racial and ethnic disparities of hypertension. These factors unfortunately remain poorly understood and are ripe for future research investigations.

3. The Ethnically Diverse Population and Hypertension: Does Quantification of Risk Matter?

In US clinical practice, the pooled cohort equation (PCE) is a primary tool used for quantitative atherosclerotic CVD (ASCVD) risk assessment.19 It facilitates a clinician-patient discussion on treatment strategies for primary prevention of ASCVD. The current model uses the same PCE risk calculator for Hispanics and Asians as for whites.21,22

The lack of ethnic-specific risk scores for Hispanics and Asians may lead to under- or overtreatment of hypertension in these populations. The recent ACC/AHA cholesterol guideline acknowledges the lack of specificity of the term Hispanic/Latino as well as the impact that race/ethnicity, country of origin, socioeconomic status and level of acculturation can have on ASCVD risk.2 This is further complicated by differences in risk among Hispanic and Asian subgroups. Given the lower risk of ASCVD in East Asians (e.g., Chinese, Japanese, and Koreans) and Hispanic whites compared to NHW counterparts, the PCE may overestimate risk in these groups.22-25 Furthermore, there appear to be differential risks among Hispanic/Latino groups – individuals of Puerto Rican descent are at higher risk while those of Mexican heritage at lower risk than NHWs. Conversely, South Asians (e.g., Indians and Pakistanis) may be at higher ASCVD risk compared to NHWs.26 In the recently published 2018 ACC/AHA guideline for cholesterol management, South Asian ancestry is grouped among the "risk enhancing" factors, defined as a group of stable factors that are associated with elevated ASCVD risk beyond traditional risk factors.27

Precise quantification of ASCVD risk for racial/ethnic minorities is essential for clinical decision making and initiation of antihypertensive therapies. ASCVD risk calculators used in Europe (e.g., SCORE or QRISK 2-2017 [available at https://qrisk.org]) account for various ethnic group-based risk differences. The currently applied risk calculators in the US can be improved upon by analyzing larger cohorts of Asian and Hispanic subgroups from clinical registries and population-based epidemiological studies. Recalibration of these tools will allow for more refined risk assessment and reduce under- and overtreatment of hypertension. It is worthwhile to mention that growing efforts in data collection from Hispanics and Asians are now in place. The American College of Cardiology's National Cardiovascular Data Registry (NCDR) has recently started to collect Asian and Hispanic sub-group data in most of its registries, while the MASALA study28 has been investigating genetic and metabolic determinants in South Asians to better understand why this population is more vulnerable to ASCVD. These initiatives may help to refine our current risk calculators to more precisely predict cardiovascular risk in these groups. 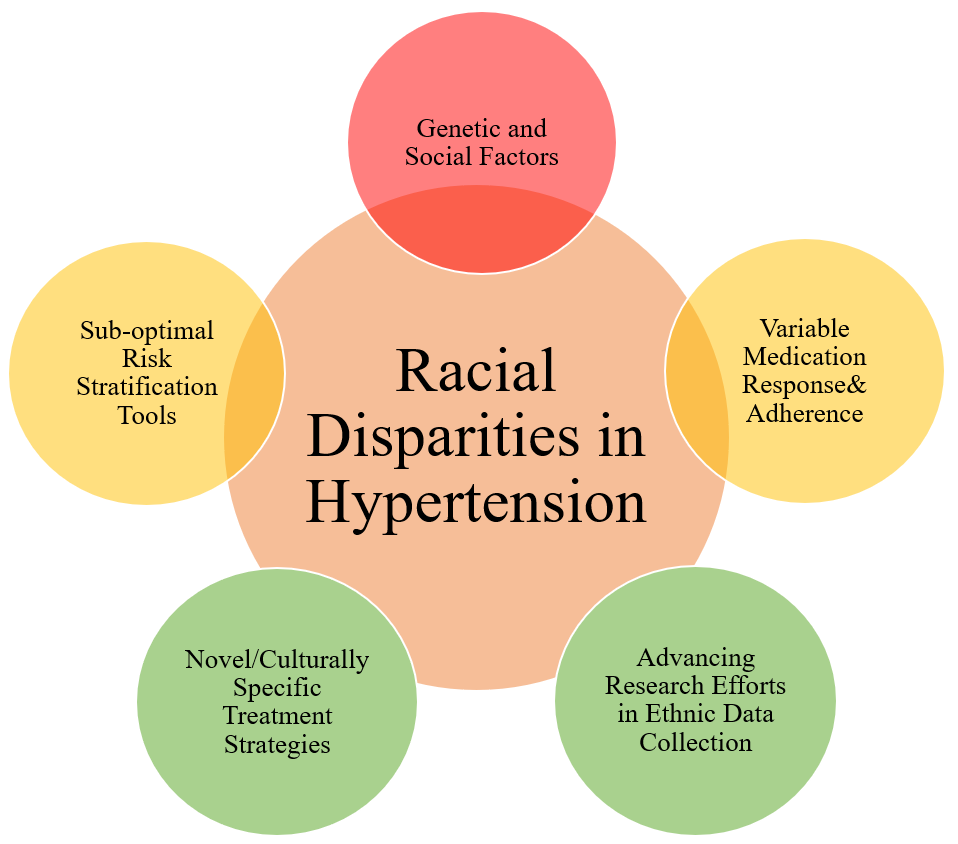 Considerable challenges remain to understand and overcome ethnic and racial disparities in the prevalence and treatment of hypertension (Central Illustration). Social determinants of health such as educational status, access to health care, and low income play a key role in prevalence and blood pressure control rates. Implementation of health care policies at the state and national levels to address these issues will be essential to reduce these disparities. While genetic and environmental factors that contribute to hypertension are poorly understood, the evolution of precision medicine and development of more refined ASCVD risk tools for Asians and Hispanics will help to optimize appropriate risk-adjusted blood pressure management and treatment.

YOU ARE HERE: Home > Latest in Cardiology > Racial Disparities in Hypertension Prevalence and Management: A Crisis Control?