The 2020 Cardiovascular Research Technologies conference (CRT.20) provided an opportunity for interventional science early in the year and turned out to be the last in-person meeting before the COVID-19 pandemic took hold.

We have assembled commentary on five trials that provide insight into several ongoing clinical issues and controversies. Included are summaries of ultrathin, polymer-coated stents with encouraging results but still challenging the polymer biology versus the strut size for success. Also included are three valve trials covering anticoagulation versus antiplatelet therapy for patients undergoing transcatheter aortic valve replacement (TAVR), the outcomes for TAVR in low-risk patients, and an analysis of late outcomes for the Carillon (Cardiac Dimensions; Kirkland, WA) mitral repair device. Finally, we’ve included an analysis of the impact of antiplatelet discontinuation during non-cardiac surgical procedures.

An interesting and diverse set of topics summarized by an outstanding group of clinicians. Thanks to all the contributors for your expertise and skill. As always, any comments are appreciated.

The authors collected retrospective data from 9 medical institutions that had performed 41,083 DES procedures over 10 years between 2008 and 2018. Of these, 3,791 had non-cardiac surgery operations, of which 3,582 were deemed eligible for inclusion (209 patients were excluded because of inadequate data, emergency surgery, and other miscellaneous high-risk issues). It's important to note that the decision to continue or discontinue antiplatelet therapy was at the discretion of the physicians, surgeons, or anesthesiologists. The patient populations were nearly evenly split between continuing (1,832) and discontinuing (1,750) antiplatelet therapy.

Baseline characteristics between groups identified relatively fewer men, less chronic renal disease, and less DAPT in the discontinuation group. Crude 30-day events were not different between groups, including death, bleeding, MI, and stent thrombosis. Overall, all-cause death and cardiac death were significantly less in the discontinuation group based on a greater incidence in the DAPT subgroup of the continuation group. In an adjusted NACE and bleeding risk, there was a trend to greater risk for antiplatelet therapy in the continuation group for intraabdominal surgery. Analysis of adjusted strategies for MACE revealed no specific factors comparing the groups.

Overall, discontinuation of antiplatelet therapy was common and seemed safe for 8 days or fewer. Although these data are interesting and potentially hypothesis-generating given the low thrombosis rate of current third-generation stents, there are limitations to applicability of the data. First, despite the adjusted covariate analysis, there is a possibility that confound bias was unrecognized in the decisions regarding continuing or discontinuing antiplatelet therapy. Given that drug levels of antiplatelet drugs decline over several days, one wonders if the difference in outcomes after 8 days represents a time frame in which patients have no residual platelet activity combined with patients likely with prolonged postoperative courses. In addition, MACE included only hard endpoints. Finally, there is the possibility that the Asian population may have different risk for bleeding that cannot be generalized to other populations.

The LRT (Low Risk TAVR) trial was designed to assess the feasibility of TAVR in patients with low surgical risk and included patients with bicuspid aortic valve stenosis. The study was single-arm and prospective with a primary endpoint of all-cause mortality at 30 days. A total of 61 patients with bicuspid aortic stenosis underwent a transfemoral TAVR procedure as part of the trial and were included in this analysis. There were no deaths or strokes at 30 days. Permanent pacemaker implantation was required in 13% of patients.

Dr. Janusz Lipiecki and colleagues presented a pooled analysis of prospective trials with the Carillon mitral repair device for transcatheter repair of functional or secondary mitral regurgitation. The Carillon device was implanted in the coronary sinus in patients with 2-4+ echocardiography-adjudicated secondary mitral regurgitation depressed left ventricular ejection fraction in symptomatic subjects who were already on guideline-directed medical therapy. Their pooled study cohort came from the TITAN (Transcatheter Implantation of Carillon Mitral Annuloplasty Device) and TITAN II early feasibility studies and REDUCE FMR (A Sham-Controlled Randomized Trial of Transcatheter Indirect Mitral Annuloplasty in Heart Failure Patients With Functional Mitral Regurgitation), which was a randomized, blinded, sham-controlled trial (Figure 1). One of the key parts of this pooled analysis was that all studies were adjudicated by echocardiography, and the inclusion and exclusion criteria were consistent. They presented data on 74 subjects, age 67 +/-11 years, with a mean left ventricular ejection fraction of 31+/-8%, a left ventricular end-diastolic volume of 195+-58 mL, and an effective regurgitant orifice of 0.2 cm2. In the cohort, 41% were judged to have 2+ or less mitral regurgitation at baseline, and 59% had 3 or 4+. The analysis focused on survival of those implanted, with a survival of 73.1% at 2 years and 56.2% at 5 years. Primary determinants of 5-year survival were an improvement in symptoms and exercise performance and decrease in mitral regurgitation with intervention.

Lipiecki et al. note that one of the main limitations of their analysis was the lack of a significant control arm for comparison. In addition, the number of subjects enrolled was quite small overall. One of the appealing aspects of the Carillon device is that it is a relatively simple procedure to implant from a right internal jugular vein approach, which minimizes some of the operator-skill issues found in other transcatheter mitral repair devices. It also preserves options for future interventions on either the mitral valve or the coronary sinus, which is appealing. Unfortunately, the anatomy of the coronary sinus is such that not all screened subjects can ultimately be implanted with the device. During the question period on the panel, Lipiecki noted that approximately 15% of cases had to be aborted due to the coronary sinus anatomy. There are additional cases that screened out prior to the procedure due to risks to the circumflex artery, which can run under the coronary sinus.

Ultimately, the data presented by Lipiecki et al. is supportive for the recently started CARILLON Trial (Assessment of the Carillon® Mitral Contour System® in Treating Functional Mitral Regurgitation Associated With Heart Failure), which is intended to be a randomized, blinded, sham-controlled study of 352 subjects in the United States and Europe. 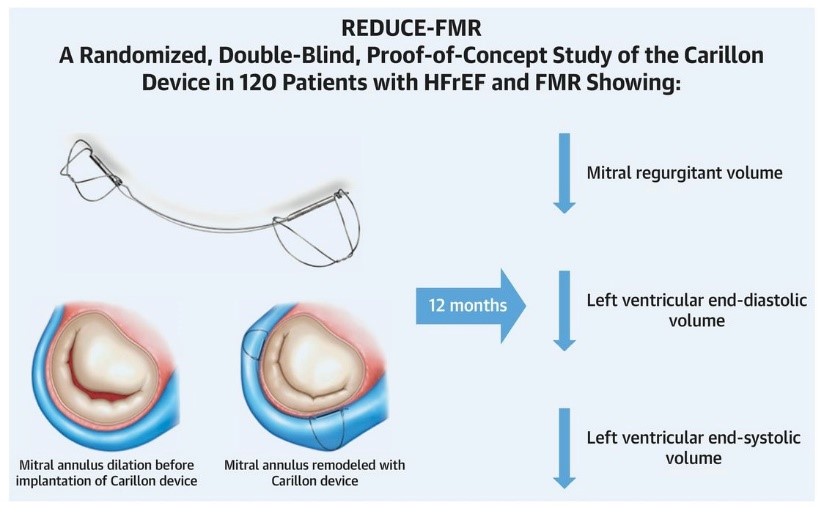 The LRT 2.0 trial, presented by Dr. Toby Rogers at CRT.20, reported the TAVR leaflet image findings at 30 days following TAVR. Their group studied the TAVR leaflet morphology and leaflet motion in 94 patients employing four-dimensional computed tomography (CT) angiography or transesophageal echocardiography at 30 days post-TAVR. These patients, who had been clinically assessed to be standard risk for open surgical valve replacement, had been randomly assigned after TAVR treatment to receive either aspirin 81 mg/d plus warfarin or aspirin 81 mg/d alone. This study found a trend to more hypoattenuated leaflet thickening in the group treated with aspirin monotherapy (8/49) compared with the aspirin plus warfarin group (2/43). No difference in valve function by echocardiographic Doppler gradient or valve regurgitation was seen. There were no differences in clinical complications or bleeding at 30 days between the 2 groups of patients.

We look forward to the formal publication of this work presented at CRT.20. Although the data from this modest cohort of patients do not provide compelling information to change current antithrombotic practice after TAVR, it serves to provide very detailed anatomic valve leaflet data at 30 days after TAVR and is hypothesis-generating, supporting the need for larger randomized trials to define optimal antithrombotic treatment of patients following TAVR.

YOU ARE HERE: Home > Latest in Cardiology > Important Interventional Trials From CRT.20