Familial Hypercholesterolemia (FH) is an autosomal dominant condition that leads to extreme elevations in low density lipoprotein cholesterol (LDL-C).1 It can remain undiagnosed until a catastrophic cardiovascular (CV) event. Thus, without early detection, many patients will remain undertreated and have missed opportunities for CV prevention.

Several tools and screening strategies have been developed to help guide clinicians to earlier diagnosis and treatment. With the widespread use of electronic medical records (EMR) data can now be extrapolated by artificial intelligence and machine learning algorithms to not only identify patients likely to have FH, but also provide better estimates of prevalence, and help understand gaps in care.1

This overview will provide a summary of the genetics, clinical manifestations, detection strategies, and current guideline-based approaches for treatment of FH.

The most predominant mutation in FH involves the low density lipoprotein receptor (LDLR) gene, resulting in a defective LDLR for the metabolism of LDL-C.2 Less commonly, there are mutations in the genes of molecules that interact with the LDLR such as apolipoprotein B (apoB) or proprotein convertase subtilisin-kexin type 9 (PCSK9), which also lead elevated plasma LDL-C (Figure 1).2,3 Furthermore, several genes remain unidentified, but clinically have the same result.2 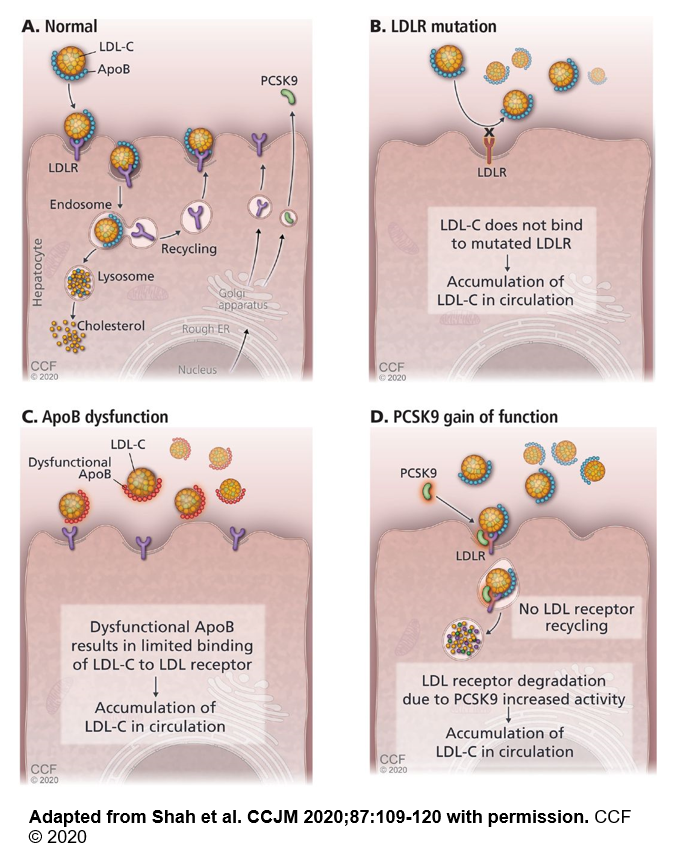 As noted, FH is an autosomal dominant condition. Thus, most patients are heterozygous, or in other words have one normal allele and one mutated allele.4 The prevalence of heterozygous FH (HeFH) is estimated to be about 1 in 220 based on large genetic studies.5

Homozygous FH (HoFH) where patients have two mutated alleles is much less common, but presents with a more severe clinical phenotype and worse prognosis since patients can manifest with CV events before age 30. The frequency of HoFH is estimated at 1 in 300,000.4,6

However, the prevalence of HeFH and HoFH can also differ by ethnic groups. Due to the founder effect, there are higher mutations rates in different parts of the world. For instance, Finns, French-Canadians, Afrikaners, and Christian Lebanese population have higher prevalence of FH.7

Racial differences also exist as African American groups have a higher prevalence than Hispanics and Caucasians.8 The distribution between men and women appears similar, although men tend to have CV events earlier than women.8,9

In general, patients with FH have elevated LDL-C from an early age, and therefore have earlier manifestations of cardiovascular disease.10-13 Studies in children with FH have shown greater carotid intimal thickness by age 8 compared to unaffected children.14 Other studies have shown that up to 25% of adolescents with FH have coronary artery calcifications.15,16

At the population level, patients with FH have at least a three times higher prevalence of atherosclerotic disease than unaffected people.17,18 The process of atherosclerotic cardiovascular disease is even more accelerated in HoFH patients where the first CV event can occur before the age of 30.19

Family history is usually focused on first degree relatives with premature CV events (typically men <55; women <65). Physical manifestations include xanthomas (Figure 2) which are pathognomonic for the disease, xanthelasmas (cholesterol deposits in the eye lids or skin), or corneal arcus (Figure 3).20 Of note, clinical criteria do not apply to HoFH; however the diagnosis is strongly suspected if the patient has very high LDL-C (>500 mg/dL untreated or >300 mg/dL if on maximal lipid-lowering therapy), and cholesterol deposits in the first decade of life in the setting of a strong family history.9 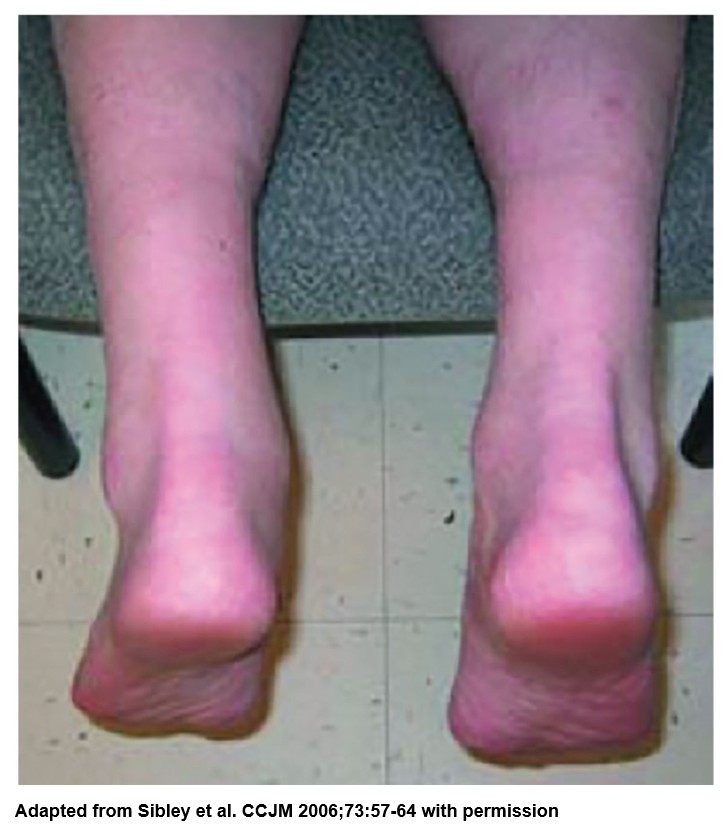 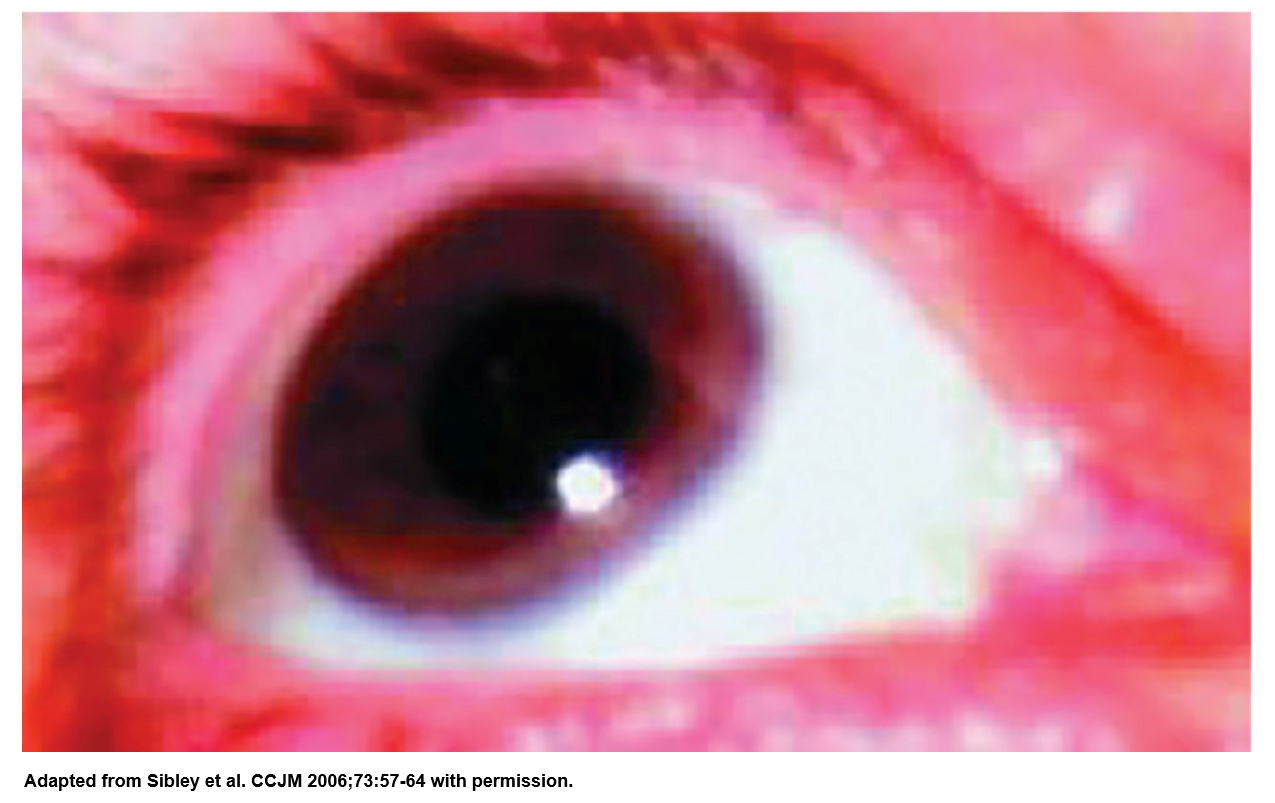 One of the most widely used clinical scoring systems to diagnose FH is the Dutch Lipid Network Criteria (DLNC).21 The DLNC yields a score based on clinical criteria including lipid levels, physical exam, and family history, as well as genetic data if available. A score of higher then 8 makes a diagnosis of "definite" FH.22

It is important to note that genetic criteria are not needed to make a diagnosis. Another criteria that was developed in the United Kingdom is the Simon Broome Registrar Criteria which also uses both clinical and genetic data.23 A third criteria called the Make Early Diagnosis and Prevent Early Death (MED-PED) criteria focuses more on lipid levels and family history without any emphasis on genetic testing.24

Interestingly, these three clinical criteria have been compared against each other and none were found to outperform the other.25 However, when patients in the "definite" categories in each criteria underwent genetic testing, the mutation detection rate was as low as 30-40%.25 These results suggest that perhaps not all mutations were tested for, and that polygenetic factors may be overlooked. Thus, the phenotype itself may be more important than the genotype to establish a diagnosis and justify treatment. This notion was also endorsed by the International Atherosclerosis Society which placed high emphasis on LDL-C levels and subclinical disease in diagnosing FH.26

The question that arises then is, what is the utility of genetic testing? Genetic testing is considered the gold standard for diagnosing FH. Some studies have shown prognostic value where at any LDL-C level, a gene positive individual will carry a higher risk of cardiovascular disease then a gene negative one.27 Genetic testing may also be able to explain phenotypic heterogeneity as certain mutations are associated with high risk.28

Patients with severe HeFH can have LDL-C levels that overlap with HoFH who often have completely null LDLR that make therapies like statins ineffective. Genetic testing in these cases can identify the overlap and alter the therapeutic strategy.26 Several barriers to genetic testing exist and include costs, privacy concerns, and ethical dilemmas if proper genetic counseling is not obtained. Furthermore, not finding a genetic mutation does not exclude the diagnosis if there is strong phenotypic evidence.2

Once an individual is identified with FH it is important to also determine who else in the family is at risk. A commonly used screening strategy is known as cascade screening where LDL-C measurement, genetic testing, or both are done in consenting relatives of patients with FH. As more individuals with FH are identified, the process repeats itself. These methods have been widely implemented in Europe and data from there suggests that identifying 9,000 cases in 10 years could prevent 847 coronary events, 203 coronary deaths, and could add 767 quality-adjusted life years.29,30

Other screening strategies include artificial intelligence systems that use machine learning algorithms to evaluate EMR and billing codes to identify patients, or large scale DNA sequencing techniques.31,32 However, these methods are novel and need further research.

Reducing the LDL-C level is one of the primary goals of treatments. Therefore, the first-line treatment is maximally tolerated statin therapy and should be started as early as possible, especially if LDL-C is ≥ 190 mg/dL (class I).33 In primary prevention, the target LDL-C is typically 100 mg/dL, though the lower the better. If this is not obtained by statin therapy alone, then the addition of ezetimibe is reasonable (class IIa).33 If the goal LDL-C is still not achieved with maximally tolerated statin and ezetimibe, or the patient is statin intolerant, then PCSK9 inhibitor therapy can be considered (class IIb).33

Medical treatment of FH should always be accompanied by lifestyle modifications to help modify other risk factors; however, lifestyle interventions alone only have a modest LDL-C reduction in FH patients.34 In secondary prevention cases, the goal LDL-C should be less than 70 mg/dL.33

In cases where LDL-C does not respond to medical therapy, often seen in HoFH, LDL apheresis can be considered. This procedure can be cumbersome and involves venous access via needle stick, or in a small number of cases via indwelling catheter, with either weekly or biweekly sessions. It is one of the only therapies shown to prolong survival in HoFH patients.35

The US Centers for Disease Control and Prevention has designated FH as a tier 1 genomic application.38 This indicates that FH imposes a significant public health burden. Several novel screening strategies using modern technology are being investigated to help improve identification. Moreover, new lipid lowering therapies are on the horizon. Most importantly, all clinicians should be aware of the clinical red flags that raise suspicion for FH in order to prevent its CV complications.

*Resources for patients and providers are provided by The Familial Hypercholesterolemia Foundation at www.thefhfoundation.org

YOU ARE HERE: Home > Latest in Cardiology > Familial Hypercholesterolemia: Early Diagnosis and Treatment is Key for Cardiovascular Prevention