Critical limb ischemia (CLI), now more commonly referred to as chronic limb threatening ischemia (CLTI), affects patients with advanced lower extremity peripheral arterial disease (PAD).1 It manifests as ischemic rest pain, described as pain in the foot while at rest lasting more than 2 weeks, or ischemic ulcers with tissue loss or gangrene and evidence of objective hypoperfusion.2 CTLI represents <10% of all PAD patients and has an annual incidence in the United states of 0.35%.3-4 Patients with CLTI typically have significant comorbidities, including diabetes, cardiovascular disease, renal failure, hypertension, hyperlipidemia and active tobacco use which predispose them to advanced atherosclerosis. Annual amputation and all-cause mortality rates of 20% without revascularization highlight the necessity of an aggressive approach to treatment.5 In a recent cost analysis of CTLI patients over four-years, the total financial burden to the US healthcare system was estimated to be over $6.5 billion dollars.6

Diagnosis and Limb Staging in CLTI

CTLI should be considered in patients with risk factors for atherosclerosis presenting with an appropriate pain pattern, numbness, or tissue loss in the distal leg or foot.2 Rest pain is typically alleviated by placing the affected limb in the dependent position. Capillary refill time will often exceed 5 seconds and pedal pulses are typically reduced or absent, although the presence of palpable pulses does not eliminate the diagnosis.7 Non-invasive hemodynamic testing, including ankle pressures (AP) and the ankle brachial index (ABI) are historically recommended first-line investigations for CTLI. However, given that falsely elevated AP and ABIs are common in patients with diabetes due to incompressible arteries from medial calcinosis, and the fact that digital arteries are often spared from this process, there is a growing appreciation for the greater reliability of toe pressures (TP) and toe brachial indices (TBI) in the setting of diabetes or chronic renal failure.1,2,8 Pulse volume recording (PVR) is an adjunctive non-invasive test that allows for the measurement of volume and flow pattern into the limb that is independent of arterial calcification and thus of benefit in these patient populations.9 Other non-invasive tests include laser Doppler flowmetry, transcutaneous oxygen measurements (TcPO2), and skin perfusion pressures (SPP), but these options are not always universally available.10,11 Patients who have clear evidence of CTLI and in whom revascularization is being considered should have additional imaging performed to determine the appropriate open or endovascular procedure.12 Standard angiography remains the gold standard imaging modality for procedural planning, although computer tomographic angiography, magnetic resonance imaging and even duplex ultrasound scanning are improving and can obviate the need for formal contrast angiography.

A classification system for the degree of ischemia associated with PAD based strictly on clinical criteria was first published by Fontaine in 1954.13 Rutherford subsequently expanded on a classification scheme for both acute and chronic limb ischemia incorporating both symptoms and objective findings.14 A more comprehensive classification structure, the Wound, Ischemia, foot Infection (WIfI) system, was recently introduced by the Society of Vascular Surgery (SVS).1,15 As it addresses the increasing presence of diabetic foot ulcers and incorporates limb perfusion, wound extent, and presence of underlying infection, it represents a major advance from the Fontaine and Rutherford models.

Open or Endovascular Therapy for CTLI

Surgical techniques for open surgery primarily include endarterectomy and bypass. For patients with tissue loss, the goal is to restore in-line pulsatile flow to the distal extremity to promote wound healing.16 Components to consider when offering open surgery include the anatomic levels of disease, availability of autogenous venous conduit, patient comorbidities including physiologic reserve, and patient life expectancy.17,18,19 The recently published SVS Global vascular guidelines for the management of CLTI emphasize that vascular specialists carefully consider patient candidacy for limb salvage, given the advanced age, comorbidities, and frailty typical of many CLTI patients requiring open surgical bypass.1 As endovascular therapy to treat CLTI has continued to evolve, it is playing an increasing role in each of the relevant arterial segments: aortoiliac, femoropopliteal and tibiopedal.20,21 Endovascular techniques include percutaneous angioplasty, stenting, atherectomy and lithoplasty. While many centers employ an endovascular-first approach to patients who are candidates for both, high-level evidence comparing superiority of either open or endovascular treatment is lacking.22 To date, there has only been one randomized control study comparing the two treatment methods.23 Currently, the ongoing Best Endovascular Versus Best Surgical Therapy for Patients with Critical Limb Ischemia (BEST-CLI) trial has enrolled over 1800 patients at 140 centers.24,25 Funded by the National Heart, Lung, and Blood Institutes, this trial will compare treatment efficacy, functional outcomes, cost-effectiveness and quality of life in CLTI patients undergoing open or endovascular therapy and will shed valuable light on optimal treatment strategies for this challenging patient population.

Accurate assessment of limb and pedal perfusion in real-time at the time of revascularization remains a significant unmet need within the vascular interventionalist community. Adequate intraprocedural measurement of blood flow, including both the spatial and quantitative aspects of end-tissue perfusion and oxygenation, has proven to be an elusive goal.26 The successful development and adoption of such technology would better clarify the perfusion to key wound beds and identify patients with an incomplete or failing revascularization. Current perfusion assessment modalities that are under active investigation and that show promise in advancing the field include laser doppler and speckle imaging devices, 2D perfusion angiography, indocyanine green (ICG) angiography, and implantable biosensors to measure tissue oxygenation.

Laser doppler flowmetry (LDF) measures microvascular perfusion by illuminating a tissue sample with single-frequency light and processing the frequency distribution of the backscattered light, thereby providing real time analysis of tissue oxygenation.27 LDF has been used as a diagnostic tool in CLTI and significant changes in LDF signals before and after revascularization in CLTI patients have been detected.28,29 Limitations of LDF warranting further refinement include the influence of the tissues' optical properties on perfusion signal, motion artifact noise, and lack of quantitative units for perfusion.30

Laser speckle imaging (LSI) measures perfusion using a coherent light source through blood to generate scattered light and an interference pattern called a speckle. A waveform is produced which can measure microvascular flow and resistance.31,32 The FlowMet-R (Laser Associated Sciences, Inc), a non-invasive device using LSI technology, recently received 510(k) clearance, and plans are in place for an observational, prospective trial in CLTI patients comparing the utility of this instrument in assessing the effectiveness of revascularization against ABI, TBI, and doppler ultrasound.

2D perfusion angiography (2DPA) is an advanced technique based on the fundamentals of digital subtraction angiography.33 2DPA can be performed before and after intervention and provides a representation of the time-density curve of contrast volume flow in the foot.34 2DPA uses similar amounts of contrast and radiation as conventional angiography but provides greater detail, including color map images and objective evidence of perfusion quality.35 Hinrichs and colleagues used 2DPA to assess 21 patients with PAD who underwent angioplasty or stent placement. The difference in multiple parameters of 2DPA was noted to correlate with an improved ABI.36 Whether or not this technology is superior to conventional angiography in predicting wound healing remains to be investigated. Of note, the presence of a wound blush following lower extremity endovascular therapy has been shown to be an independent predictor of wound healing.37

Another technique that has shown considerable promise in measuring real-time foot perfusion utilizes indocyanine green (ICG) dye. ICG binds to circulating hemoglobin and absorbs light in the near-infrared range and is the basis for fluorescence imaging (FI). The use of ICG as a marker for revascularization was first described by Unno in 2008, who found it to be a safe alternative to conventional angiography.38 As it is completely metabolized by the liver, it can be used for patients with renal insufficiency and avoids the radiation exposure to both the patient and surgical team. The time required to reach half the value of maximum intensity (T1/2) and the difference in fluorescence intensity between baseline and 10 seconds after the rising point (PDE10) are two parameters that have been used to assess foot perfusion in PAD.39 Venermo and colleagues have expanded on the use of ICG angiography in patients who were revascularized with both open and endovascular approaches.40 They have specifically studied the relevance and role of the angiosome concept in patients receiving either surgical or endovascular revascularization. Unlike ABI and TP measurements, which they found could not be performed in nearly half of their patients due to non-compressible arteries or tissue loss, ICG-FI could be successfully used in all patients and could reliably predict both successful and unsuccessful revascularizations based on maximum intensity of ICG-FI (see Image 140). One limitation to ICG-FI is the inability to directly measure wound beds in the presence of necrotic tissue. Also, superimposed infection resulting in inflammation and hyperemia may result in a false-negative result. 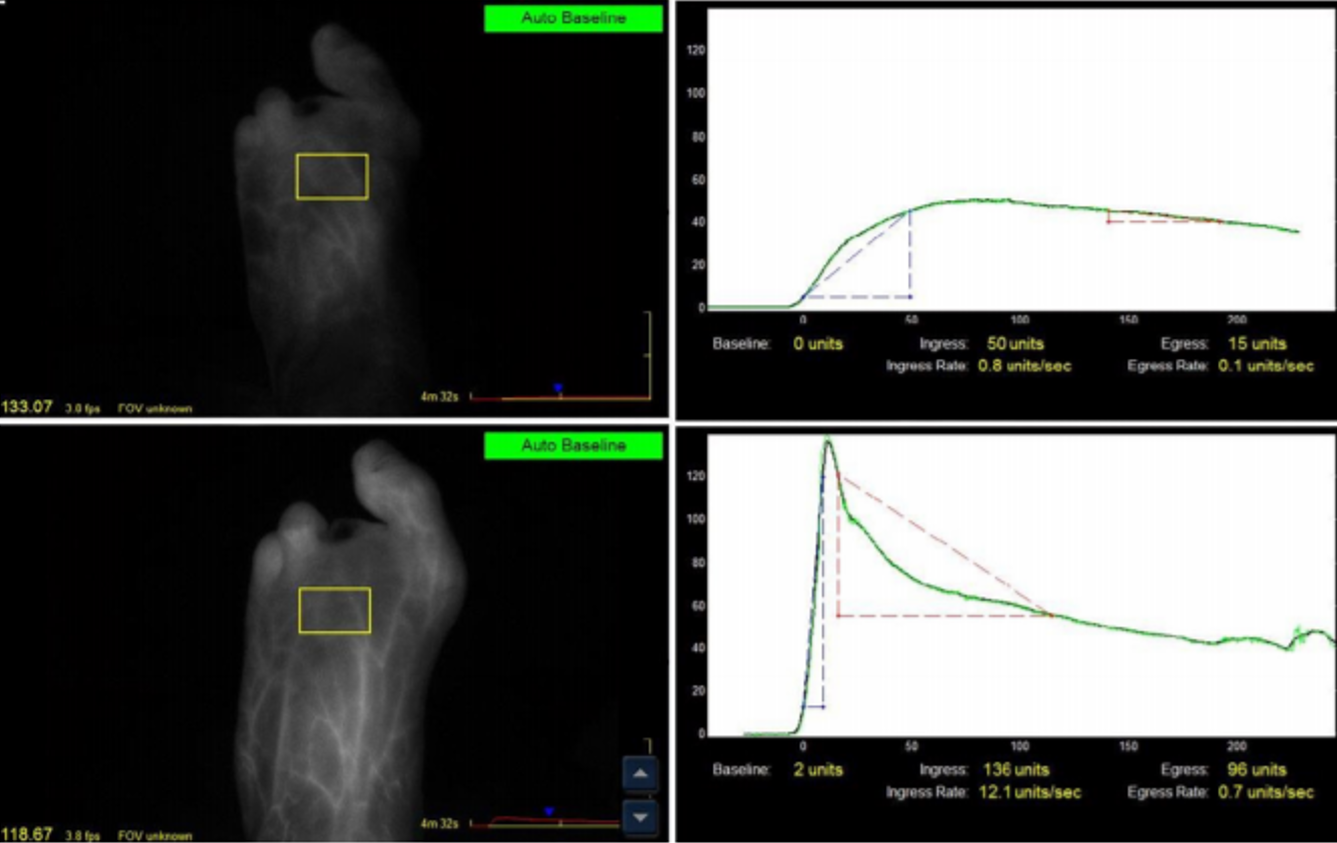 Exciting work is also being done with permanent micro-oxygen sensors (Lumee® Oxygen sensor; PROFUSA, INC, Emeryville, Ca), which can be injected into the soft tissue of CLTI patients and used to monitor local tissue oxygen concentration during and after revascularization. Compared to noninvasive techniques which measure vascular oxygenation saturation, the micro-oxygen sensors measure tissue oxygen concentration, which is not subject to interference from patient motion or changes in pressure. In work carried out by Miguel Montero-Baker and others, the sensors were placed approximately 5-10 mm from the ischemic border in proximity to a given wound or ulcer (see Image 241). In ten patients studied, the micro-oxygen sensors demonstrated an improvement in local tissue oxygenation after balloon angioplasty and stenting and successfully predicted wound healing. Some potential limitations to these biosensors are inherent to the patient's baseline oxygen tissue concentration, which can be altered by underlying comorbid diseases such as chronic obstructive pulmonary disease or congestive heart failure commonly found in CLTI patients. As this technology continues to evolve and the durability of the implants increases, the potential to follow patients longer term and reliably identify at risk revascularizations in an outpatient or remote setting will likely also improve.

There is a great need for better metrics to reliably assess tissue perfusion in the foot or toes preceding, during, and following revascularization in PAD and CLTI. The currently available tools to guide interventions in real time and predict successful relief of rest pain and healing of wounds lack an acceptable degree of sensitivity and predictive value. More specifically, the current commonly used techniques of simple pulse examination, hand-held doppler assessment, and completion angiography are relatively crude and do not provide direct information on perfusion to a specific ischemic target. A clear but as yet unrealized objective in the quest to develop a newer and better perfusion measure is to understand just how much restored blood flow is enough for a specific foot ulcer to heal or degree of rest pain to durably resolve, and to be able to reliably predict success or failure in achieving this goal at the time of repair. At present, the perfect assessment tool, which should be accurate, easy to use, affordable, and widely available to this difficult patient population, remains to be developed. Fortunately, innovative work is being carried out on a number of promising fronts in the ongoing effort to improve on existing techniques.

YOU ARE HERE: Home > Latest in Cardiology > CLI Diagnostics and Real Time Guidance