For the 41st Annual Heart Rhythm Scientific Sessions (HRS 2020), I had dreamed of escaping the cold hustle-and-bustle of New York City to soak up the San Diego sun and relax in the laid-back atmosphere of the West Coast.

Little did I know that my first experience as an electrophysiology (EP) fellow with the HRS meeting would instead involve sheltering-in-place as I watch snow fall in early May. Virtual Conferencing was Actually Quite Enjoyable!

Although I did miss catching up with old colleagues, networking with industry leaders, and participating in extracurricular festivities, I did not miss the logistical nightmare of making conference-related accommodations, hauling luggage and presentation materials across the country, and getting lost in a convention center while running between simultaneous conference sessions. All HRS content was conveniently available online. For the first time ever, I was able to browse through each of the abstract presentations at my own leisure. In 2016, the HRS opening plenary speaker Sal Khan, founder of the Khan Academy, advocated for individuals learning at their own pace. This year's virtual conference format of HRS 2020 was the perfect embodiment of this concept. Atul Verma, MD, presented the first in-human study evaluating the safety and efficacy of a Medtronic PFA system using a circular tip ablation catheter in 14 patients with AFib. Acute PVI was achieved in 100% of cases without serious adverse events (SAE) at 30-day follow-up. Results from one-year follow-up are pending. With the newest advancements in RFA, even the deepest lesions and the sickest patients could benefit from treatment. Douglas L. Packer, MD, FACC, presented the first-in-man safety and efficacy outcomes for ablation of refractory ventricular tachycardia (VT) using an endocardial intramural needle that delivered heated saline enhanced radiofrequency (SERF) energy. In 32 patients with ICD shocks for recurrent VT who had failed prior VT ablation, the use of the SERF needle catheter led to successful ablation and non-inducibility of the clinical VT in 100% of cases. Of the 28 patients with five-month follow-up, there was an 89% reduction in ICD treatments. Acute complications included death (n=2), stroke (n=2) and pericardial effusion requiring drainage (n=1). Results from the six-month follow-up are pending.

Phillip S. Cuculich, MD, Associate Fellow of ACC, presented long-term safety and efficacy outcomes from the ENCORE-VT study of noninvasive stereotactic body radiation therapy (SBRT) in patients with refractory VT who had previously failed or could not tolerate catheter ablation. Of the 19 patients with median LVEF=25% who underwent SBRT, one patient experienced an early SAE (pericarditis within 90 days) and three patients experienced late SAEs (two with pericardial effusions and one with gastropericardial fistula, all after two years). Compared with the VT burden six months prior to SBRT, the VT burden was reduced in 94% of patients (n=17) at six months after SBRT and in 78% of patients (n=11) at 24 months after SBRT. The subcutaneous ICD (S-ICD), Micra leadless pacemaker, and Watchman FLX left atrial occlusion device all met or exceeded their performance goals when compared to a predecessor benchmark. Reinoud Knops, MD, PhD, presented the outcomes from the PRAETORIAN trial, which randomized 426 patients to S-ICD and 423 patients to transvenous ICD (TV-ICD). At four-year follow-up, the composite endpoint of device-related complications and inappropriate shocks was found to occur with similar frequency in the S-ICD and TV-ICD groups (15.1% vs. 15.7%; p<0.01 for noninferiority). This finding was balanced by more device-related complications in the TV-ICD group (9.8% vs. 5.9%; p=0.11) but more inappropriate shocks in the S-ICD group (9.7% vs. 7.3%; p=0.14). However, only 78% of S-ICD devices utilized SMART pass filter. In the UNTOUCHED trial, Michael R Gold, MD. PhD, FACC, revealed that in 1,111 patients with newer generation S-ICD devices implanted for primary prevention, many of which employed the SMART pass filter, inappropriate shocks only occurred with a 3.1% incidence over 18 months of follow-up (performance goal <8.4%; p<0.001). Would the results of PRAETORIAN have been different if contemporary S-ICD devices had been used?

Using a U.S. Medicare population for comparison of 3,726 patients with the Micra pacemaker (M-VVI) against 7,246 patients with a transvenous VVI pacemaker (T-VVI), Jonathan P. Piccini Sr, MD, FACC, demonstrated that the M-VVI group experienced a 66% reduction in six-month complication rates compared with the TV-VVI group (3.3% vs. 9.4%; p<0.01).

In the PINNACLE FLX trial of 395 AFib patients who underwent implantation with the newest generation Watchman FLX device, Shephal K. Doshi, MD, FACC, revealed that the one-year primary efficacy endpoint of jet leak <5 mm occurred in 100% of patients (performance goal >97%; p<0.0001), with a complete seal (no leak) occurring in 89.5% of patients. This is a major improvement compared with the initial Watchman device from PROTECT-AF and PREVAIL, where only 66% of patients had a complete seal at one year. The one-year primary composite safety endpoint of death, ischemic stroke, systemic embolism or device-related complications requiring intervention occurred in only 0.5% of patients (performance goal <4.21%; p<0.0001). Integration of digital health platforms with patient care has led to novel ways of monitoring heart rhythm disorders and treatments, with smart devices leading the way in this charge. Zhan Shi, MD, reported that in 160 patients with AFib on long-term oral anticoagulation (OAC), those randomized to smart watch-guided reminders for OAC intake demonstrated a significantly greater adherence to OAC use over the nine-month study period compared with those randomized to standard care (proportion adherent by month nine: 78-100% vs. 30-40%; p<0.005).

Khaldoun Tarakji, MD, MPH, FACC, reported that in 245 patients with Medtronic pacemakers (including biventricular devices), those who had scheduled device transmissions guided by a smartphone or smart tablet demonstrated significantly greater compliance with transmissions over a 12-month period compared with three historical real-world cohorts of 245,272 CareLink patients (94.6% vs. 60.0-86.6%; p<0.001). The scheduled transmission rate in a real-world (non-study) observation of 811 patients using smartphone or smart tablet-guided device transmissions revealed a similarly high adherence rate of 92.8%. 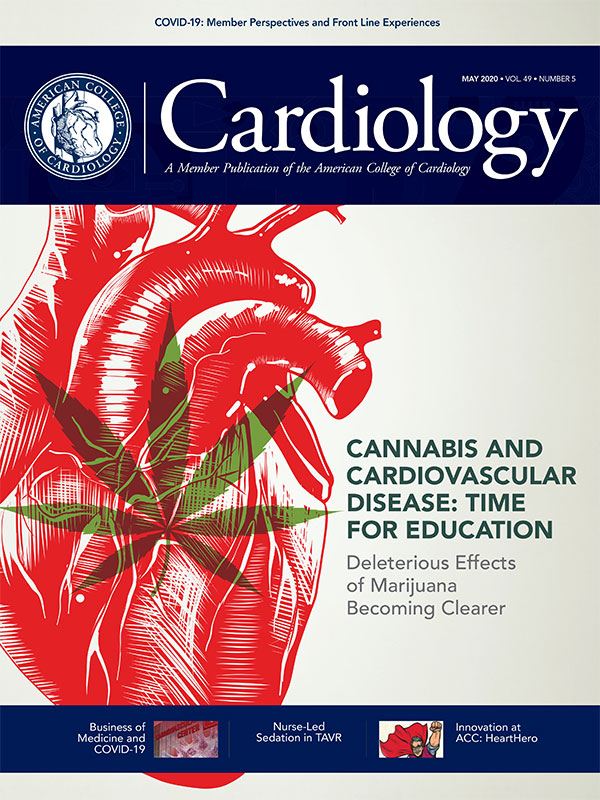 YOU ARE HERE: Home > Latest in Cardiology > For the FITs | HRS 2020: My Top Five Takeaways