The Role of the Hybrid Procedure to Treat AF

When it comes to the treatment of symptomatic atrial fibrillation (AF), there are broadly two groups: those who respond to catheter ablation and everyone else. For everyone else, the techniques of hybrid ablation have evolved. Hybrid ablation implies the use of both minimally invasive surgical techniques on the epicardium in conjunction with endocardial catheter-based techniques to deliver a more complex and effective set of lesions than either could accomplish on its own. Most patients with paroxysmal AF will respond to catheter-based pulmonary vein isolation (PVI); however, some do not. Failure can be due to either a break in the lesion set or the fact that the source of AF is more complex and originates somewhere other than the pulmonary veins. In patients with persistent AF or long-standing persistent AF, catheter-based techniques have recurrence rates as high as 40-50%,1,2 even after multiple attempts. With the introduction of the Cox-Maze surgical ablation procedure and its most recent iteration, Cox-Maze IV, success rates are significantly better because the complex ablation pattern interrupts sustained re-entry circuits (Figure 1), halting the propagation of AF.3,4 Cox-Maze use is largely limited to patients already undergoing cardiac surgery because it requires either sternotomy or thoracotomy and use of cardiopulmonary bypass (CPB) and an arrested heart. To recreate, or at least approximate, the lesions created in the Cox-Maze IV with a less-invasive technique, several "hybrid" approaches have emerged that combine the epicardial capabilities of surgeons with the endocardial capabilities of electrophysiologists. Most broadly, they can be classified into the following approaches: sub-xyphoid (convergent), bilateral thoracoscopic, and unilateral thoracoscopic. Each creates epicardial lesions, and none requires the use of CPB. Example lines of ablation for thoracoscopic and sub-xyphoid approaches can be seen in Figures 2 and 3, respectively. 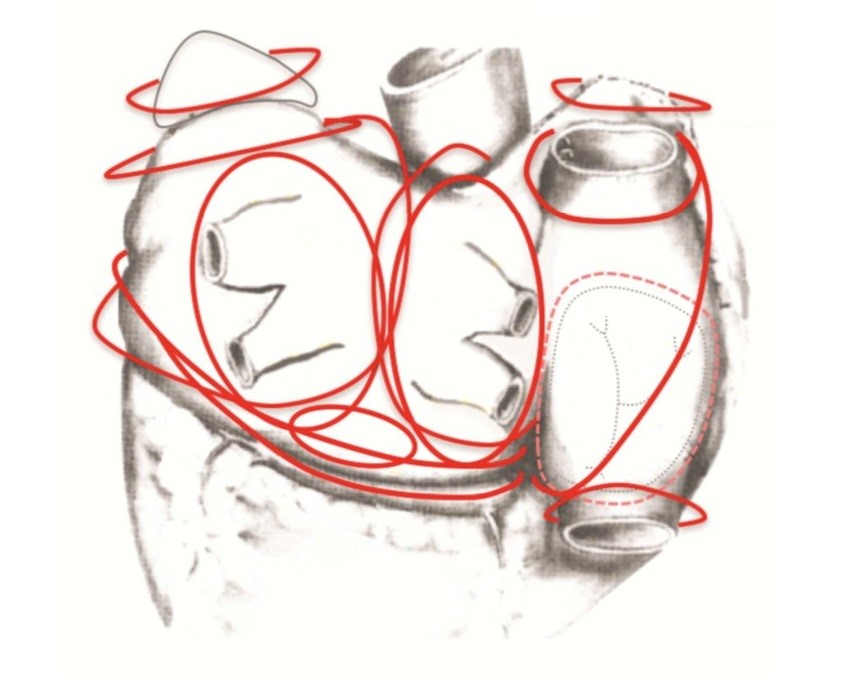 Similar to the Cox-Maze IV, the foundation of these approaches is the box lesion isolating the posterior left atrial wall. This lesion is created in the thoracoscopic approach via bilateral PVI with a roof and floor line or in the convergent approach via catheter-based PVI followed by ablation of the entire poster wall. To this foundation, additional ablation lines can be placed using a combination of epicardial and endocardial techniques. The sequence of procedures can all be done at once in the electrophysiology laboratory or staged as separate procedures. Endocardial mapping and touch-up may be performed to complete the lesion set, if the procedure is staged, or done together with surgery first. The source of energy for the surgical approach can be either unipolar or monopolar. At our center, we have routinely been adding thoracoscopic clipping of the left atrial appendage (LAA) along with ligation of the ligament of Marshall to the convergent procedure. Additionally, when done in the electrophysiology laboratory, we have been using the pentaray catheter and mapping software to create an epicardial map to guide epicardial ablation during the convergent procedure. In addition, for patients with no endocardial option (i.e., congenital lack of inferior vena cava [IVC] or IVC occlusion precluding trans-septal puncture), both a thoracoscopic and sub-xyphoid approach have been used at the same time to maximize the lesion set. Although the current iterations of the hybrid procedure do not ablate the right atrium and are, therefore, not the complete lesion sets as set forth in the Cox-Maze IV, a complete hybrid lesion set is possible as outlined by Cox et al. (Figure 4).5 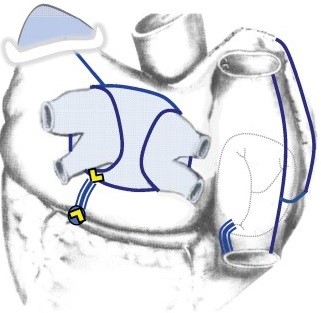 To date, no randomized controlled trial has demonstrated the safety or efficacy of the hybrid procedure over catheter ablation. The CONVERGE (Epi/Endo Ablation For Treatment of Persistent Atrial Fibrillation) trial has completed enrollment investigating the hybrid procedure for patients with persistent AF, refractory to at least one anti-arrhythmic drug, but no data have been published. Similarly, for the thoracoscopic approach, the DEEP (Dual Epicardial Endocardial Persistent Atrial Fibrillation) study is underway and will evaluate the safety and efficacy of this approach. The HARTCAP-AF (Hybrid Versus Catheter Ablation in Persistent AF) trial is also enrolling as a single-center randomized study to compare the effectiveness of a thoracoscopic hybrid approach with repeated catheter ablations.6 A systematic review comparing endocardial Cox-Maze on CPB versus epicardial ablation off CPB versus the hybrid procedure found restoration to sinus rhythm at 12 months without anti-arrhythmic drugs at a rate of 87%, 72%, and 71%, respectively.7 Studies included in this review did not consistently define paroxysmal versus persistent AF, and populations differed significantly in type of AF and duration of symptoms. Among the hybrid procedures, 38.0 % were performed via bilateral thoracoscopy and 44.6% via a sub-xyphoid approach. A multicenter European study evaluated 73 consecutive patients undergoing the convergent procedure across 4 different sites, including only those in persistent or long-standing persistent AF.8 At 12 months, 80% of patients were in sinus rhythm, 76% without subsequent interventions, and 52% not taking anti-arrhythmic drugs. Adverse events occurred at a rate of 11% and included bleeding complications, phrenic nerve palsy, tamponade, pericardial effusion, and pleural effusion. There were no operative, perioperative, or late mortalities, and no instances of esophageal fistulae, which was a concern encountered with prior techniques. Another recent review demonstrated 12-month success rates of 77.3% and 65.8% off anti-arrhythmic drugs. Notably, none of the patients who recurred had concomitant LAA exclusion.9

The 2017 expert consensus statement on the treatment of AF10 acknowledges the need for clinical trials to compare different approaches and definitively demonstrate the hybrid procedure's role relative to catheter ablation or stand-alone surgery. The authors do comment on the promise of this procedure to offer a solution for a challenging patient population. Currently, the consensus statement recommends the hybrid approach using the same indications as stand-alone minimally invasive surgery for patients with symptomatic AF refractory or intolerant to at least one Class I or III anti-arrhythmic drug and who have failed one or more attempt at catheter ablation. Evidence is stronger for those with persistent or long-standing AF compared to paroxysmal AF. At our institution, we consider a hybrid procedure for all patients who have failed catheter ablation, often multiple times. The vast majority of these patients is in persistent or long-standing AF. Recognizing the complexity of this patient population, other centers have moved to a hybrid-first strategy in patients with longstanding AF, foregoing attempts at a solely catheter-based approach. Anecdotally, we have noted that patients with AF for >5 years or with left atria >6 cm have higher failure rates when compared with others with shorter duration and smaller atrial size. This is considered in risk/benefit discussions, but we have not implemented strict exclusion criteria at our center.

Moving forward, one can envision the growth of interdisciplinary heart teams dedicated to the treatment of AF where the pros and cons of each approach are considered in the context of each individual patient. High-quality data comparing these techniques is forthcoming and will also help identify patients at particular risk of failure and complication. As adoption and familiarity improve, it is also foreseeable that the full Cox-Maze IV hybrid lesion set could be pursued in order to achieve even higher success rates. In the meantime, surgeons and electrophysiologists continue to offer novel approaches to complex patients who have proven resistant to more established treatment methods.

YOU ARE HERE: Home > Latest in Cardiology > The Role of the Hybrid Procedure to Treat AF