A 44-year-old male presents to your clinic to establish care. He is asymptomatic but reports that he has first-degree relatives with a history of coronary artery disease, some of whom required coronary artery bypass surgery in their fourth decade of life. Physical exam is unremarkable apart from a body-mass index of 33 kg/m2. Labs are notable for a calculated low-density lipoprotein (LDL)-cholesterol (LDL-C) of 284 mg/dL. What are some important considerations in the management of this patient?

Familial hypercholesterolemia (FH) is the most common monogenic disorder, affecting an estimated 1:250 people worldwide.1-3 FH is caused by inherited autosomal-dominant defects of LDL metabolism (Table 1).4-7 There are three major genetic loci linked to FH, with the majority (approximately 88%) of cases due to mutations in the LDL receptor (LDLR) gene. The fundamental pathophysiologic hallmark of FH is accelerated atherosclerosis due to the cumulative lifetime exposure to high concentrations of circulating LDL. Although the prevalence of FH in the general population is substantial, only about 15% to 20% of affected patients receive a formal diagnosis.4 Patients with untreated heterozygous FH are at approximately 10-20-fold increased risk for premature coronary artery disease (CAD).4,8 This risk can be reduced to that of the general population with appropriate recognition and treatment of FH.4,6,7,9 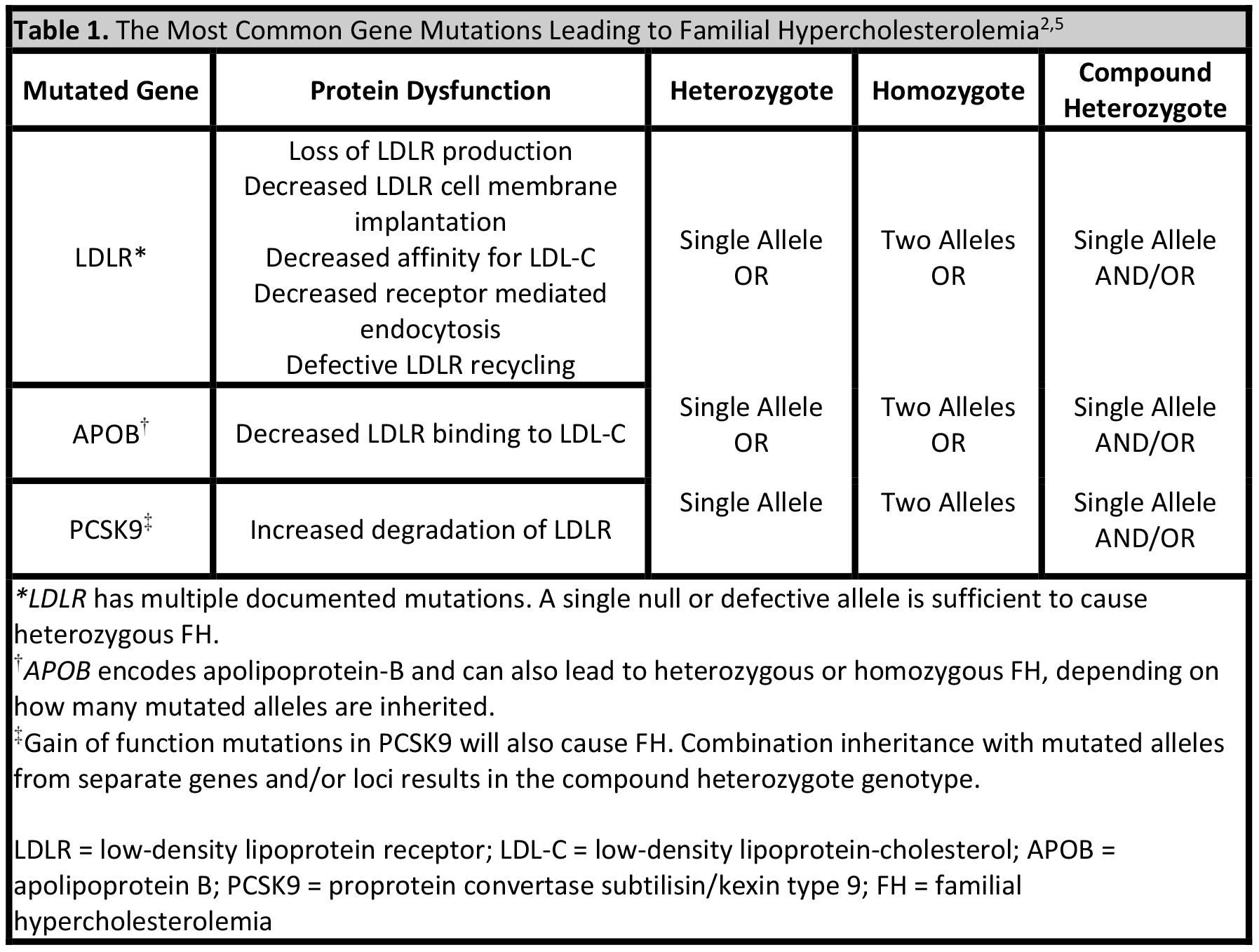 Universal screening at 9-11 years of age for elevated LDL-C is recommended by multiple organizations. LDL-C level greater than 190 mg/dL or LDL-C greater than 160 mg/dL coupled with a family history of premature CAD should prompt further evaluation for FH.6,7,10 Table 2 outlines recent North American and European screening guidelines that should prompt suspicion for FH.11,12 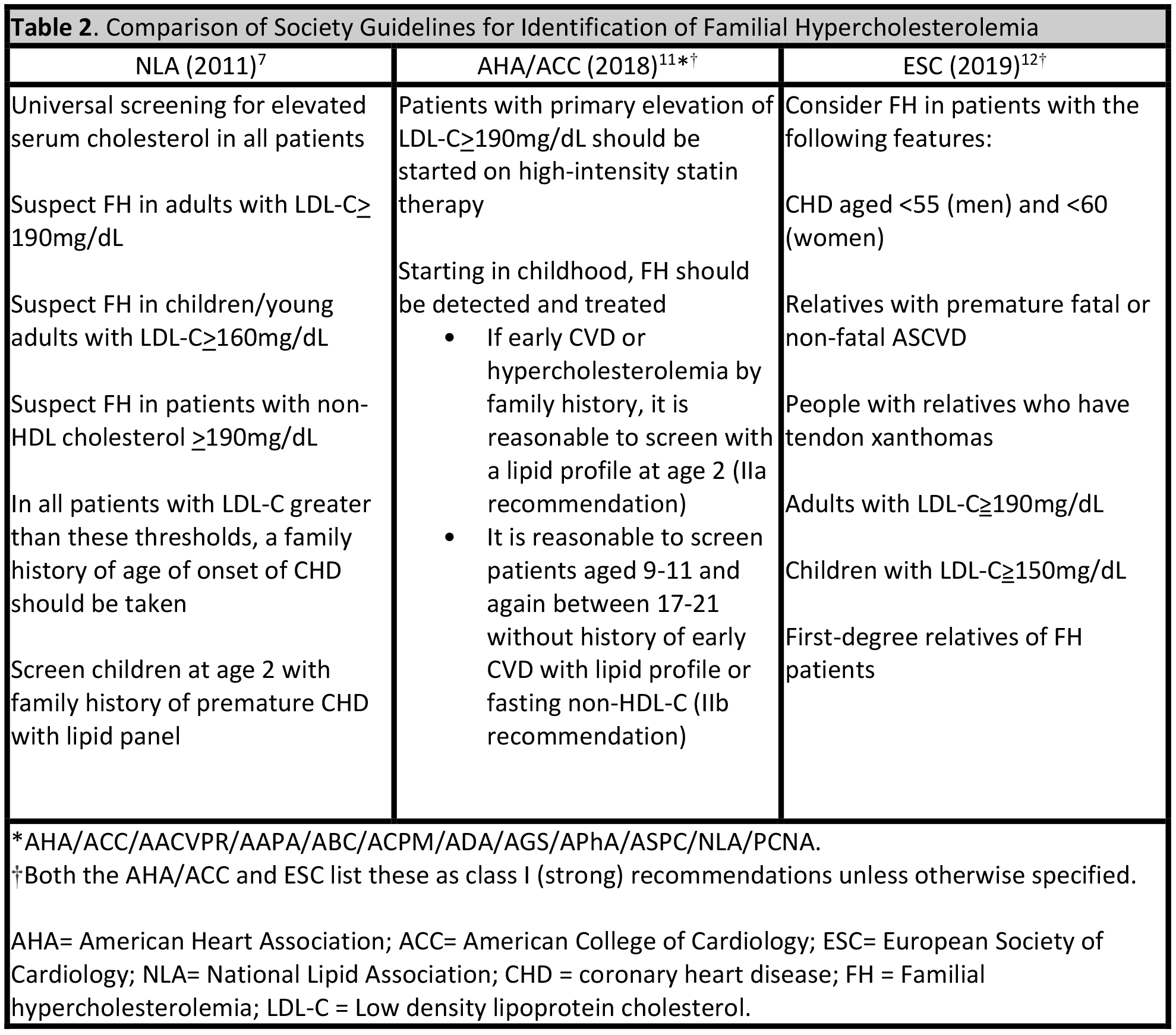 FH remains a clinical diagnosis but can be confirmed by genetic testing. North American and European diagnostic schema incorporate various aspects of family history, presence of physical exam findings, LDL-C levels, and/or genetic testing to categorize patients as to their probability of having FH (Table 3). Genetic testing for FH includes testing for pathogenic variants in three primary genes: LDLR, APOB, and PCSK9. The FH Foundation recommends genetic testing in patients with definitive or probable FH along with cascade screening of first degree relatives.13 The presence of a causal genetic mutation carries significant risk that compounds the elevation in LDL-C. For example, when referenced to patients with LDL-C ≤ 130 mg/dL, FH patients with LDL-C>190 mg/dL had a twenty-two-fold higher risk of CAD (OR 22.3, 95%CI 10.7-53.2).14 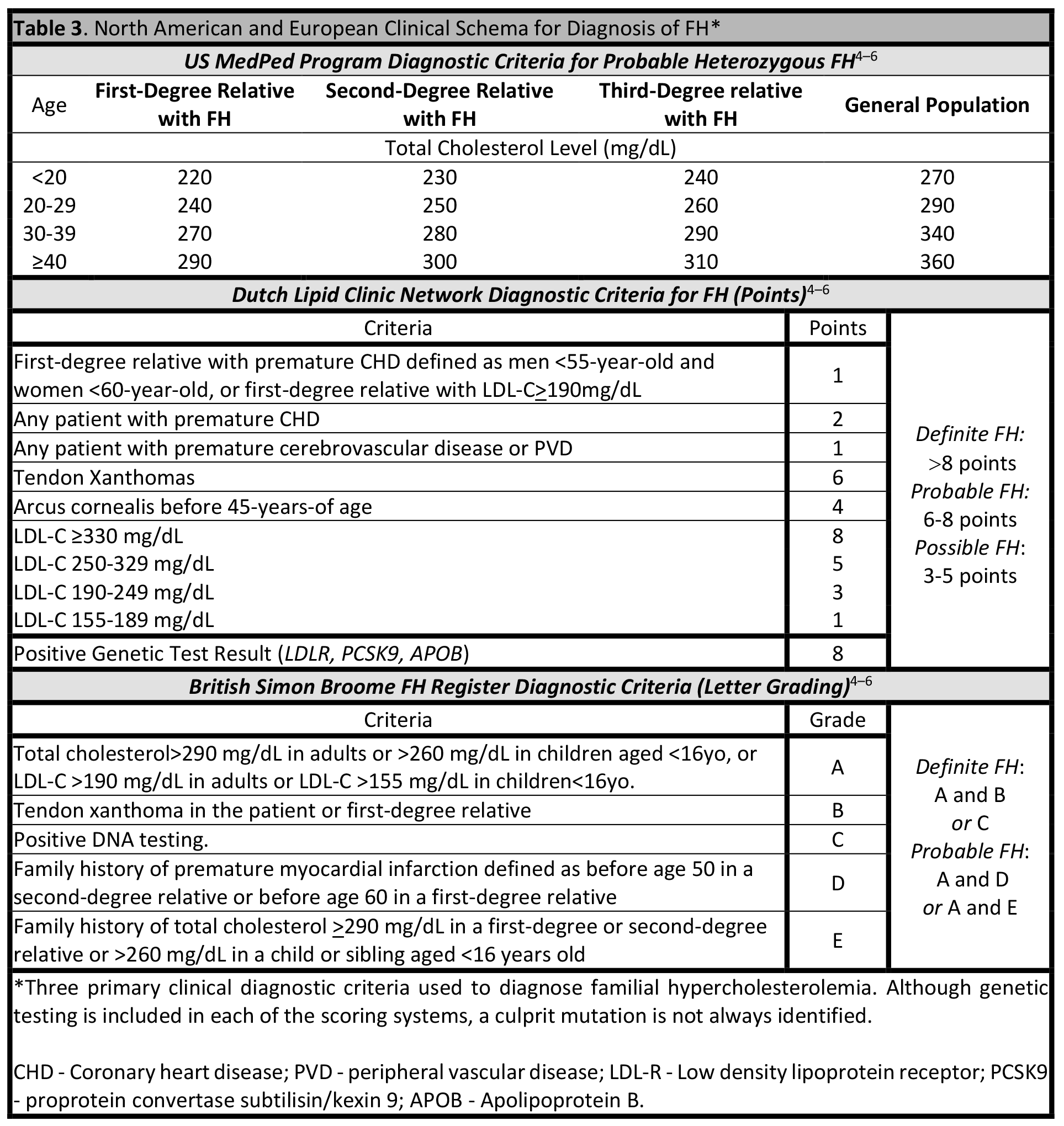 There are important caveats in the molecular diagnosis of FH. Individuals with a clinical diagnosis of definite FH are found to harbor causal mutations only 60-80% of the time. This observation may be explained due to mutations in established genes that have yet to be discovered, novel FH genes, or presence of an FH phenocopy.13 Additional challenges of genetic testing include genetic discrimination for possible life and long-term care insurance. Potential advantages of genetic testing include formal confirmation of a diagnosis of FH as well as the ability to facilitate cascade genetic screening.

Although there are many putative clinical and laboratory markers that can provide incremental prognostic information, refining risk stratification with measures of subclinical coronary atherosclerosis in asymptomatic FH individuals appears to be the most promising. It is important to clarify that the role of atherosclerosis imaging in FH is quite different than its routine use in the general population. All adult patients with FH should receive lifestyle counseling and high intensity statin therapy independent of additional testing; statin therapy should be started at the lowest dose in children and titrated upwards.15 However, within the context of FH, the utility of atherosclerosis imaging is to identify individuals who may be eligible for more aggressive management approaches above and beyond therapeutic lifestyle changes and statin therapy.

With respect to cIMT, pediatric FH patients have higher cIMT values as compared to age-matched controls with normal lipid levels, suggesting utility as a non-invasive marker of ASCVD risk.16 Indeed, pediatric FH patients who were started on statins and followed over 20 years had decreased progression of cIMT and fewer cardiovascular events in comparison to their parents.17 Despite this observation, cIMT has not been shown to correlate with vascular disease in the aorta or coronaries in FH patients.18,19

Given robust improvements in discrimination, calibration, and net reclassification in the general population, CAC scoring has been evaluated in FH populations for further ASCVD risk stratification.20 In a prospective study by Miname et al, 206 asymptomatic molecularly confirmed individuals with heterozygous FH were followed for a median of 3.7 years to evaluate CAC as a predictor of ASCVD events. Among patients with a CAC score of 0 (n= 101, 49%), no ASCVD events were observed. Higher CAC scores correlated with an increased incidence of major adverse cardiovascular events. In adjusted models, CAC was found to be an independent predictor of ASCVD events.21 Additionally, these same investigators calculated a vascular age with the standard Framingham Risk, [vascular age-Framingham Risk Score (vaFRS)]. Patients with higher vaFRS demonstrated markedly elevated CVD risk: all 15 subjects who suffered ASCVD events had a vaFRS>20%.

Lastly, CCTA has also been shown to help risk stratify asymptomatic patients with FH. Advanced disease on CCTA correlated to the estimated cardiovascular risk evaluated by the SAFEHEART risk equation.22 Findings such as coronary calcium, the sum of stenosis, and plaque composition sum all correlated with estimated cardiovascular risk.23 Among 101 Japanese patients with FH, increasing coronary plaque burden as demonstrated by CCTA was significantly associated with future coronary events.22

Given the heterogeneous expression of the FH phenotype, selective use of coronary vessel imaging in the form of CAC scoring or CCTA offer a promising method of risk stratification, despite the inherently high baseline risk of this population.

While therapeutic lifestyle changes are paramount in all individuals, these efforts alone may not decrease LDL-C to an adequate level in those with FH. High-intensity statin therapy should be initiated in all adult patients with goal LDL-C reductions ≥50% and/or achieved LDL-C <100 mg/dL in those without ASCVD.6,7,9,24 Stepwise intensification of pharmacotherapy should be initiated in all patients who fail to achieve LDL-C reductions and those with additional risk factors such as smoking, family history of premature ASCVD, and Lp(a) ≥50mg/dL.7 Ezetimibe is recommended as the second-line adjunctive therapy and is associated with LDL-C reductions of 20-24% above and beyond what is achieved with statin therapy. If combination therapy with maximally tolerated statin and ezetimibe fails to adequately reduce LDL-C, a PCSK9 inhibitor should be considered.6,11

For individuals with FH who fail to achieve adequate LDL-C reduction with maximal medical therapy, LDL apheresis may be an option. Apheresis is an extracorporeal therapy that can selectively remove LDL and Lp(a) particles from circulation and has been shown to prevent and slow progression of CAD.30-34 The US Food and Drug Administration set criteria for initiation of LDL apheresis in 1997 with eligible patients defined as those with homozygous FH and LDL-C ≥ 500mg/dL, heterozygous FH and LDL-C ≥ 200mg/dL in the presence of CAD, or heterozygous FH and LDL-C ≥ 300mg/dL in absence of CAD.33 Apheresis results in an immediate decrease in ApoB-containing lipoproteins, with an acute LDL-C reduction of nearly 60%.33 LDL apheresis has extended the lifespan of homozygous patients to over 50 years.32

FH is an underdiagnosed yet treatable disorder. Recognizing FH is of utmost importance due to the high risk of premature CAD and major adverse cardiovascular events. After diagnosis of an index case, there is a mandate to perform cascade lipid and/or genetic screening of all first-degree relatives.

Our patient has probable FH according to the Dutch Lipid Clinic and Simon Broom Register diagnostic criteria. In addition to emphasizing the importance of therapeutic lifestyle changes, high intensity statin therapy should be recommended. The potential value of genetic testing should be discussed with referral to a certified genetic counselor if the patient is amenable. His first-degree relatives should also be evaluated for FH. If high-intensity statin therapy fails to decrease his LDL-C by 50% or more (or attain and LDL-C <100 mg/dL), then addition of non-statin therapy should be recommended, starting with ezetimibe. If after three months of combination therapy, LDL-C reduction is still inadequate, a PCSK9 inhibitor may be considered. Alternatively, CAC testing can be discussed, and if performed, the absence of CAC may argue against the addition of a PCSK9 inhibitor, at least in the short term. With appropriate monitoring and LDL-C reduction, our patient's ASCVD risk can be decreased substantially.