Stereotactic body radiotherapy (SBRT) was introduced in the 1950s using the Leksell Gamma Knife system (Elekta AB; Stockholm, Sweden) that involved a spherical dose of radiation from multiple cobalt-60 sources that focused on a target volume of tissue. The initial system was limited to target tissues in the brain. Linear accelerator-based radiotherapy was introduced in the 1980s. Linear accelerator-mounted kilovoltage cone-beam computer tomography generates X-rays instead of gamma rays that are present in the Gamma Knife system. In the 1990s, CyberKnife (Accuray; Sunnyvale, CA) was created and allowed for submillimeter accuracy and the eventual ability to target extracranial lesions.1

High dose per fraction is delivered using SBRT, usually in the 25-40 Gray (Gy) range. The dose is targeted to a specific area of tissue and results in local tissue destruction. On a cellular level, radiation induces double-stranded DNA breaks that lead to apoptosis and vascular damage that leads to ischemia. These effects were mainly studied in dividing cells. The effects of radiation in SBRT can take several weeks to become evident by noninvasive full thickness gap-free ablation via cardiac fibrosis, though immediate effects/early response are seen in some cases likely via electrical substrate remodeling, increased levels of cardiac conduction proteins, and activated electrical reprogramming pathways to prevent ventricular tachycardia (VT) reentry.

Standard cardiac ablation is not successful in some cases when the substrate is not easily ablated or accessible. SBRT has its own challenges in that it must account for respiratory and cardiac motion. Techniques have been developed to account for both of these with the aim of creating an internal target volume. The radiation dose is not uniform, though, with a decrease in the radiation dose at the edge of the target and collateral tissues receiving radiation dose. Studies have initially been performed on swine models to assess feasibility of SBRT in creating electrical disturbances in the heart. One group of researchers targeted different areas on the heart including the cavotricuspid isthmus, atrioventricular (AV) node, junction of the pulmonary vein and left atrium, and left atrial ablation. In many cases, the dose of radiation required to achieve success exceeded 25 Gy that is used clinically. SBRT produced histologic changes including vacuolation, fibrosis, and calcifications without damage to nearby tissue structure. Lehmann et al. demonstrated dose-dependent fibrotic changes caused by increasing doses of radiation to different areas of the heart in 17 swine with successful decrease in cardiac impulse propagation in all cases.3 Linear accelerator-based SBRT was tested on 7 swine AV nodes, and 6 of these pigs had successful interruption of AV nodal conduction at doses ranging from 25 to 55 Gy without any short-term side effects. Additionally, histologic studies of surrounding tissues did not show any effects of radiation outside the target volume.4

For VT, the first step is to locate the ventricular scar that is thought to be the substrate of the VT. There are several imaging modalities that can be used to identify scar; these include magnetic resonance imaging (MRI), computed tomography (CT), and nuclear imaging/viability scans. Electroanatomic or electrocardiogram (ECG) mapping can also be done to create a three-dimensional (3D) map and help locate scar tissue and VT circuit (Figure 1). The 12-lead ECG and programmed electrical stimulation also help in the location of the VT exit site. A clinical target volume is thus created. Imaging fiducial markers for respiratory tracking include existing implantable cardioverter defibrillator (ICD) leads and temporary pacing wires. An internal target volume is then created with respiratory and cardiac motion compensation. A radiation treatment plan with a planning target volume is then created to target the ventricular scar (Figure 2). The patient is positioned in the immobilization cradle and aligned with the use of imaging, and treatment with a single-fraction ablative dose of radiation is applied to the planning target volume in a shielded room. The patient is monitored closely on telemetry during and immediately after the procedure in the recovery area before going home (Table 1). 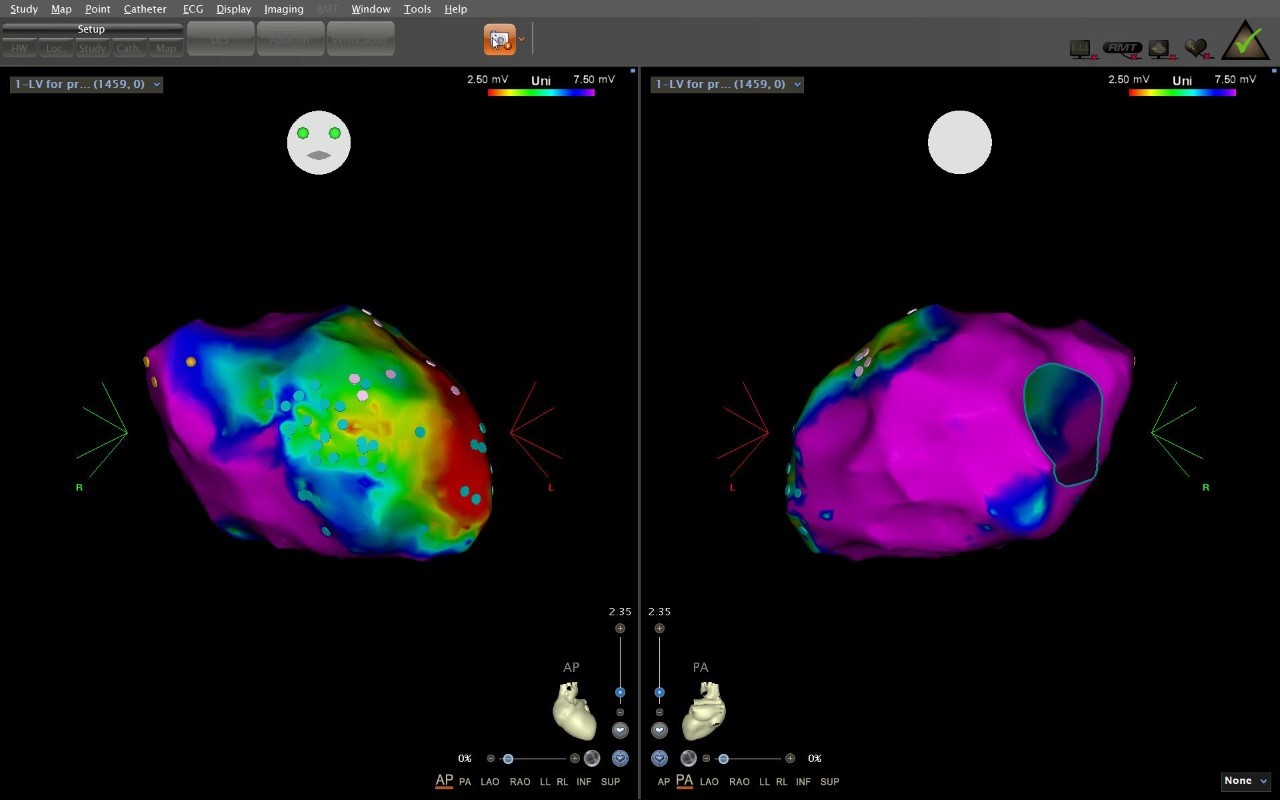 SBRT is emerging in its clinical use in VT. When used for cardiac arrhythmias, SBRT is termed stereotactic arrhythmia radioablation or stereotactic ablative radiotherapy. Because ventricular arrhythmias often arise from regions of myocardial scar, imaging is performed to identify these areas as targets for stereotactic arrhythmia radioablation. Areas of scar are generally mapped using electroanatomic mapping systems during routine invasive cardiac ablations as areas of low voltage. With the emergence of noninvasive ablation, noninvasive imaging modalities are also used in identifying areas of scar. These include CT, echocardiography, nuclear perfusion imaging, positron emission topography scan, or contrast-enhanced MRI.5 Additionally, noninvasive electroanatomic mapping can be performed with electrocardiographic imaging to identify origin of VT.6,7

The first use of stereotactic arrhythmia radioablation for VT in humans was performed by Loo et al. in 2015. VT scar substrate was localized to the left ventricular (LV) myocardium in a 71-year-old man with a history of ischemic heart disease. A dose of 33 Gy of radiation was targeted to the center of this scar. A significant decrease in the burden of VT was seen after the procedure, but recurrence was seen after 9 months; this was thought to be because of underdosing of radiation. There were no acute or long-term complications from the procedure.8 Cvek et al. applied a dose of 25 Gy using the CyberKnife system to a patient with VT, which resulted in no episodes of VT within the 120-day follow-up period with no clinical side effects.9 Robinson et al. performed SBRT in 19 patients with either treatment-refractory VT or premature ventricular contraction-related cardiomyopathy. A dose of 25 Gy was also used in this study. There was an 11% serious adverse event rate and a 94% reduction in VT episodes, with 89% overall survival at 6 months. Three deaths were related to recurrent VT. Use of dual antiarrhythmic medication also decreased significantly.10 Cuculich et al. performed SBRT on 5 patients with refractory VT by delivering a dose of 25 Gy to target tissue. During the 3-month pretreatment period, these 5 patients had 6,577 episodes of VT combined. During the 6-week period after ablation, when arrhythmias are thought to occur due to post-ablation inflammation, there were 680 episodes of VT. After that, the reduction of VT burden was 99.9%. Adjacent lung opacities consistent with inflammatory changes at 3 months had resolved by 1 year.11 Cuculich et al. additionally assessed global myocardial function a year after noninvasive ablation and showed preservation of function, with some cases of improvement in LV ejection fraction (likely because of reduced burden of VT).12

Krug et al. performed the first SBRT treatment for VT in Germany and were successful in significantly reducing VT burden from 5 to 1.6 episodes per week. Long-term effect was not studied because the patient died 57 days after the procedure from severe sepsis.13 Martí-Almor et al. performed SBRT in a patient with arrhythmogenic right ventricular cardiomyopathy and refractory VT. Absence of ventricular arrhythmias was seen at 4 months, and MRI showed a new dense transmural scar at the site of radiation. The right ventricular ejection fraction did not significantly change after radiation.14

Cuculich et al. recently reported longer-term results from SBRT performed in 19 patients (median LV ejection fraction 25%; 74% had New York Heart Association Class 3 or 4; 53% had VT storm despite antiarrhythmic medication [median = 2] and catheter ablation [median = 1]) with either treatment-refractory VT or premature ventricular contraction-related cardiomyopathy. A single-fraction dose of 25 Gy was used in this study, and the median follow-up was 34 months (7.9-60.1 months). Overall survival at 1, 2, and 3 years was 74%, 53%, and 46%, respectively. Nine deaths occurred, with 4 possibly related to the treatment. Late serious adverse events (>6 months) were rare. The markedly reduced VT burden persisted through the first 3 years, but complete freedom from VT was uncommon.18 Table 2 lists studies and reports of SBRT for VT.

As seen in clinical experiments, radiotherapy has delayed effect on cardiac structures. Knowledge about these delayed effects, often decades after radiation, comes from the cardiotoxic effects after radiation of lymphomas. These effects have been seen on coronary arteries, the conduction system, valves, myocardium, and pericardium. Although SBRT aims to avoid toxic effects on adjacent tissues, there still exists respiratory and cardiac motion that can increase the risk of delivery of radiation out of target despite the strategies to limit their effect. These risks are particularly important in patients who have longer expected survival than in patients for whom this is used as a palliative measure. Collateral radiation in SBRT was studied in a patient who received 25 Gy to a target volume of myocardium. The maximal dose that reached the spinal cord was 3.9 Gy (acceptable limit = 13.7 Gy), the maximal dose that reached the lung was 2.2 Gy (acceptable limit <18 Gy), and maximal esophageal dose was 13.9 Gy (acceptable limit = 15.4 Gy).19 The normal myocardium also receives a dose of radiation, especially nearby coronary arteries. It is thought that the coronary artery nearest the myocardial scar is most likely already occluded, so radiation will unlikely have any major effects.5 Neuwirth et al. studied the side effects of radiation in 10 patients who received SBRT for VT related to structural heart disease. They note nausea as an acute toxicity in 40% of patients, and these patients had received target radiation to the inferior wall of the LV, which is close to the stomach. These patients responded well to antiemetics. One patient who had baseline mitral regurgitation had worsening regurgitation and valvular morphology changes 17 months after the procedure that was thought to be a possible late effect of radiation toxicity. No effects were observed either acutely or in the long-term follow-up period in these patients.20

SBRT is proving to be a promising alternative for refractory VT with what has so far been shown to be a low side effect profile. However, continued improvement in strategies to compensate for cardiac and respiratory cycle motion in SBRT is needed, as are more long-term efficacy and long-term recurrence data. Furthermore, the toxic effects of radiation to both cardiac structures and adjacent organs need to be assessed, and more multicenter studies are needed with randomized controlled trials comparing radioablation to repeated catheter ablation.

YOU ARE HERE: Home > Latest in Cardiology > Noninvasive Cardiac Radioablation for VT