The Fontan procedure is the palliative procedure of choice for several complex congenital cardiac malformations that are characterized by a single functional ventricle that is not amenable to a biventricular repair.1 Although it resolves the initial hemodynamic limitations associated with single-ventricle anatomy, it results in a low cardiac output state that leads to reduced exercise performance.2,3 The main reason for reduced cardiac output or exercise intolerance is the reduction of preload for the systemic functional single ventricle. In absence of a subpulmonic ventricle, the preload is dependent on the gradient between the central venous pressure and the systemic ventricle end-diastolic pressure. Elevated pulmonary vascular resistance (PVR) can worsen this gradient and impair cardiac output even in the presence of normal cardiac systolic function (Figure 1). Therefore, it is plausible that improving PVR with pulmonary vasodilator medications in patients with Fontan physiology may improve cardiac output (or exercise performance).

Figure 1: Relationship of Output During Exercise, PVR, and Ventricular Function 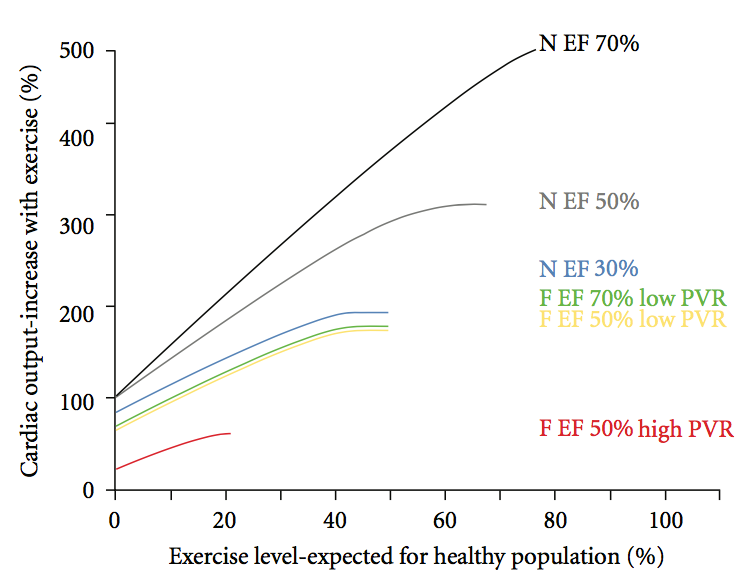 The FUEL (Fontan Udenafil Exercise Longitudinal) trial is a multicenter, double-blind, randomized controlled trial in which the primary goal was to assess if modulation of PVR by udenafil, a long-acting phosphodiesterase type 5 (PDE5) inhibitor, led to an improvement in exercise capacity of adolescents (12-18 years of age) with prior history of Fontan procedure.4-6 To focus on the impact of udenafil on pulmonary vasculature, patients with severe ventricular dysfunction and severe atrioventricular regurgitation were excluded. Patients who had maximal VO2 below 50% predicted for age and gender were also excluded. The 400 eligible subjects were than randomized in a 1:1 fashion to receive either udenafil 87.5 mg BID or placebo. The primary outcome was change in oxygen consumption at peak exercise between baseline and week 26, which was not statistically significant (udenafil vs. placebo, 44 ml/min (2.8%) vs. -3.7 ml/min (-0.2%); p = 0.07). There was, however, a small and statistically significant improvement in VO2 at ventilatory anerobic threshold (3.2%; p = 0.01).

The FUEL trial is essentially a negative trial but an important one. It is one of the largest studies evaluating the use of pulmonary vasodilators in this population. Therefore, it contributes significantly to the body of scientific evidence, which so far had comprised studies with limited numbers or limited follow-up and variable results.7-10 Whether the "statistically significant" improvements in secondary outcomes are "clinically significant" is debatable.

A comparison of exercise physiology in normal cardiovascular circulation and a Fontan circulation can also help us better understand the reasons for the negative results. Under normal circumstances, exercise causes the right ventricle to increase pulmonary blood flow by increasing heart rate and stroke volumes. The pulmonary pressures can rise to 50 mmHg during exercise while keeping the systemic venous pressures low. Increase in pulmonary pressures leads to recruitment of collapsible pulmonary vessels and optimal increase in preload for the left ventricle (systemic ventricle). In the absence of a subpulmonic ventricle, the rise in central venous pressure with exercise is not enough to recruit the collapsed pulmonary vessels, resulting in reduced ventricular preload for the systemic single ventricle.11,12 It is unlikely that, short of a mechanical support device, any medical intervention alone will be enough to achieve the recruitment of the collapsed pulmonary vessels and augment the preload of the single ventricle during exercise.

It must also be remembered that at the microscopic level, the changes seen in pulmonary vasculature are different in Fontan circulation than changes seen in pulmonary arterial hypertension. In pulmonary arterial hypertension, there is medial hypertrophy of muscular and elastic arteries due to proliferation of vascular smooth muscle cells (VSMCs) along with intimal fibrosis.13 In contrast, Fontan pulmonary vasculature shows progressive involution of the medial layer, loss of VSMCs, and eccentric intimal fibrosis.14 This loss of VSMCs may explain absence of response to udenafil, which predominantly acts on these muscle cells through PDE5 inhibition to achieve therapeutic effect. Similarly, it would also appear that none of the currently approved pulmonary vasodilator therapies should provide any beneficial effect on PVR in failing Fontan because of absence of VSMCs. This hypothesis has not yet been vigorously studied.

We hope to learn more about pulmonary vasodilator therapy in Fontan patients from the ongoing trials such as RUBATO (Clinical Study Assessing the Efficacy and Safety of Macitentan in Fontan-palliated Subjects). In contrast to the FUEL trial, RUBATO seeks to enroll all patients above the age of 12, including adults, and excludes only patients who have severely reduced peak oxygen consumption (<15 ml/kg/min). The wider inclusion criteria may help us address some of the unanswered questions from the FUEL trial.

Until more data are available, the results of the FUEL trial indicate that PDE5 inhibitors are unlikely to provide significant medium-term benefit in adolescents with well-compensated Fontan circulation. Whether chronic long-term administration of udenafil can delay onset of Fontan failure remains unanswered. We hope that the results of ongoing trials along with results of the FUEL trial will help us better define the patient population that will benefit from pulmonary vasodilator therapy.

YOU ARE HERE: Home > Latest in Cardiology > The FUEL Trial