A Woman with Painful Blue Finger

A 62-year-old woman presented to the Vascular Medicine clinic with complaint of painful blue discoloration in the second finger of the right hand for about ten days. She described a burning sensation similar to "touching a stove." She reported that the digit was cold, blue, and swollen. 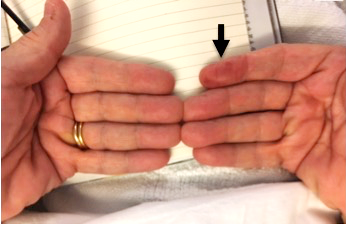 She denied any symptoms of arm or hand claudication. The past medical history was significant only for hyperthyroidism and there was no family history of any thrombosis or aneurysms. She was a never smoker and denied use of cannabis. There is no history of use of cocaine, hormone therapy, or anabolic steroids. She also denied any history of raynaud's phenomenon or migraine attacks. On physical examination there were blotchy patches of cyanosis and the tip was spared. The finger was tender to palpation with a cold tip and normal capillary refill. It was possible to obtain Doppler signals. The discoloration did not blanch and the Allen's test was normal. Examination of all other fingers of the right hand and opposite hand was unremarkable. Cardiac rhythm was regular and there were no murmurs, gallops, or rub. Bilateral pulses in carotid, radial, ulnar, femoral, popliteal, dorsalis pedis, and posterior tibial arteries were present and normal.

Local trauma to the digit can present with painful bluish discoloration. Spontaneous hemorrhage of the venules of the digit can lead to blue discoloration of the digit, which is also known as Achenbach's Syndrome.1 The first step in the evaluation of possible ischemia to the digit is non-invasive arterial physiology studies in the vascular laboratory. Our patient underwent bilateral upper extremity pulse-volume recordings (PVR) along with photoplethysmography (PPG) of all digits. The right and left wrist-brachial indexes (upper extremity equivalent of ABI – Ankle Brachial Index) were 1.09 and 1.06 and digital-brachial indexes (upper extremity equivalent of TBI – Toe Brachial Index) were 0.83 and 0.89 respectively (normal) along with normal PVRs (Image 1a). However, the PPG of the second right digit showed dampened waveform suggestive of ischemia (Image 1b). 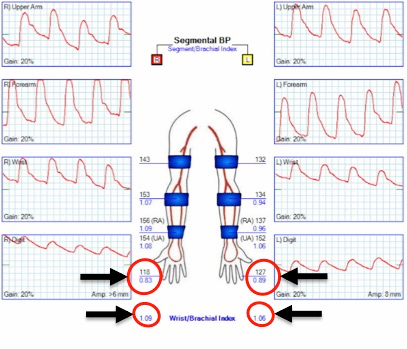 Image 1b: Photoplethysmography (PPG) of All Digits of Bilateral Upper Extremities 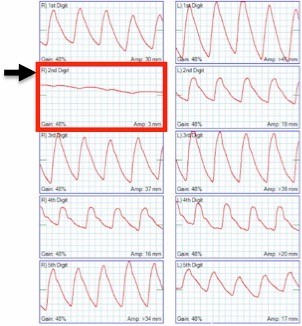 The next step in the evaluation of any ischemic event is to determine whether arteriosclerosis is an underlying issue. Our patient does not have any atherosclerosis risk factors of hypertension, dyslipidemia, diabetes, or obesity. There is no family history of premature atherosclerotic events. She also denies tobacco use. Therefore, arteriosclerosis and thromboangiitis obliterans are an unlikely etiology in our patient. It is important to keep in mind that usually generally benign atherosclerosis can transform into serious acute thrombosis via disruption of an atherosclerotic plaque by combination of plaque vulnerability (intrinsic disease) and rupture triggers (extrinsic forces).2

Cardioembolism was ruled out with an echocardiogram showing normal ejection fraction without any wall motion abnormalities, no prosthetic valves, absent visible valvular vegetations, absence of atrial myxoma or other cardiac tumors, lack of patent foramen ovale (PFO) via bubble study with valsalva, and absent visible intracardiac thrombus with the use of saline contrast. Ambulatory cardiac monitoring by Zio patch was unremarkable for the presence of any subclinical atrial fibrillation, which could manifest as arterial thromboembolism.3

Thrombophilia evaluation for an arterial ischemic event depends on two factors: 1) Can the thrombophilia explain the arterial thromboembolic event as an etiology, and 2) Will the results change the management approach of such event. Antiphospholipid antibody syndrome (APS) is associated with an increased risk of arterial thromboembolism,4 and positive for all three antiphospholipid antibodies (lupus anticoagulant, anticardiolipin, and anti-B2-glycoprotein-1) is associated with the highest risk.4,5 Warfarin anticoagulation alone or in combination with antiplatelet therapy has been recommended for patients with arterial thromboembolism and APS.6 Heterozygous Factor V Leiden (FVL) or prothrombin gene 20210A (PT G20210A) mutation do not increase the risk for arterial thromboembolism.7 The uncommon homozygous FVL and homozygous PT G20210A mutation, as well as double heterozygous status (FVL and PT G20210A mutation) may pose a mildly increased risk of arterial events,8 but they do not change the management approach. Similarly protein-C, protein-S, or antithrombin-III (AT3) deficiency are not associated with arterial thromboembolism in patients over the age of 55 years.9 Therefore, the only clinically relevant thrombophilia test to order in this patient would be antiphospholipid antibodies, which were unremarkable. There is no need to look for deep vein thrombosis (DVT) because of the absence of right to left shunt on echocardiogram with bubble study.

Vasculitis is a possible etiology, but was unlikely in this patient, given the absence of systemic symptoms of fever, fatigue, arthralgias, etc., and normal serum inflammatory markers (ESR, CRP), as well as unremarkable antinuclear antibodies (ANA), antineutrophil cytoplasmic antibodies (ANCA), rheumatoid factor (RF), and Complement levels (C3, C4). Hematological conditions like essential thrombocythemia (ET) or polycythemia vera (PV) are also unlikely in the absence of any clinical features or any blood count abnormalities. Moreover, there is no supporting data to test for the mutation of Janus kinase 2 (JAK2) enzyme function in such patients with unexplained arterial thrombosis. Cocaine use can lead to ischemic digits10 and cannabis can cause Buerger disease (thromboangiitis obliterans).11 However, she denied tobacco or cannabis use or any other illicit drug use including cocaine. Many drugs are associated with acute ischemic events such as oral contraceptives,12 hormone replacement therapy,13 and anabolic steroids,14 but she denied taking any of them.

Finally, she underwent a computed tomography (CT) angiogram of her right upper extremity to assess for any anatomical abnormality (Image 2a). It showed a "string of beads" appearance of right brachial artery. She also underwent follow up CT angiogram of the head, neck, chest, abdomen, and pelvis. She was found to have similar appearance in both renal arteries (Image 2b). 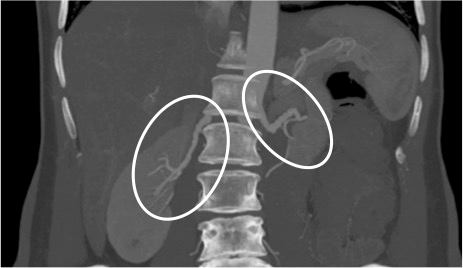 This finding of "string of bead" is characteristic of multifocal Fibromuscular Dysplasia (FMD). FMD is an idiopathic, segmental, non-inflammatory, and non-atherosclerotic disease of medium or small sized arteries characterized by disfigured architecture of the arterial wall. It most commonly affects the renal and extracranial carotid arteries, but has been described in all vascular beds, and multiarterial involvement is common. The intra-arterial webs and areas of dilatation in FMD may provide a nidus for platelet aggregation and cause thrombotic or thromboembolic events. Therefore, the first international consensus document15 recommends that in the absence of contraindication, antiplatelet therapy (i.e. aspirin 75-100 mg daily) is reasonable in FMD. There are no data to support anticoagulant therapy in symptomatic FMD. Our patient was treated with aspirin 81 mg daily with full resolution of her symptoms and without any recurrent ischemic events.

YOU ARE HERE: Home > Latest in Cardiology > A Woman with Painful Blue Finger