Atrial fibrillation (AF) confers a four- to fivefold increased risk for ischemic stroke and accounts for approximately 15% of ischemic strokes in the United States each year. Long-term anticoagulation with warfarin or direct oral anticoagulants is the standard of care for stroke prevention for individuals with nonvalvular AF and a moderate or high stroke risk. Left atrial appendage occlusion (LAAO) lowers the risk of stroke by excluding the left atrial appendage from the systemic circulation and preventing thrombus formation and embolization; it has emerged as a treatment option for patients with AF who are at moderate to high risk of stroke and poor candidates for long-term anticoagulation.

The PROTECT-AF (WATCHMAN Left Atrial Appendage System for Embolic Protection in Patients With Atrial Fibrillation; n = 707) and PREVAIL (Prospective Randomized Evaluation of the WATCHMAN LAA Closure Device in Patients With Atrial Fibrillation; n = 407) pivotal trials were relatively small randomized controlled trials designed as Bayesian non-inferiority trials comparing the WATCHMAN device to warfarin anticoagulation in patients eligible for both over the long term. In March 2015, after these trials with accompanying continued access protocol data, the WATCHMAN™ LAAO device (Boston Scientific; Marlborough, MA) was approved by the US Food and Drug Administration (FDA) for stroke prevention in AF. Several other percutaneous LAAO devices are currently being developed and evaluated in clinical trials.

To better understand the utilization, safety and effectiveness of LAAO devices in real-world clinical practice, the American College of Cardiology and the Society for Coronary Angiography and Intervention collaborated with the FDA, the Centers for Medicare and Medicaid Services, and Boston Scientific to develop the National Cardiovascular Data Registry (NCDR) Left Atrial Appendage Occlusion Registry (LAAO Registry). Here we present the patient, hospital, and physician characteristics as well as in-hospital adverse event rates for WATCHMAN percutaneous LAAO procedures performed in the United States during the first 3 years of the LAAO Registry between 2016 and 2018.

A total of 38,158 procedures from 495 hospitals performed by 1,318 physicians in the United States was enrolled in the NCDR LAAO Registry between January 2016 and December 2018. The mean patient age was 76.1 ± 8.1 years, the mean CHA2DS2-VASc score was 4.6 ± 1.5, and the mean HAS-BLED score was 3.0 ± 1.1. The median annual number of LAAO procedures performed for hospitals was 30 (interquartile range = 18-44), with most hospitals performing fewer than 40 procedures per year. For physicians, the median annual volume was 12 (interquartile range = 8-20), with most performing fewer than 20 procedures per year. However, there was substantial variation in volumes across sites and providers (Figure1). Procedures were cancelled or aborted in 7% of cases; among cases in which a device was deployed, 98.1% were implanted with <5 mm leak. Major in-hospital adverse events occurred in 2.16% of patients. The most common complications were pericardial effusion requiring intervention (1.39%) and major bleeding (1.25%); stroke (0.17%) and death (0.19%) were rare (Figure 2). Figure 2: Acute Procedural Success Compared With Prior Trials and Registries and Major In-Hospital Adverse Events in the NCDR LAAO Registry, 2016-2018 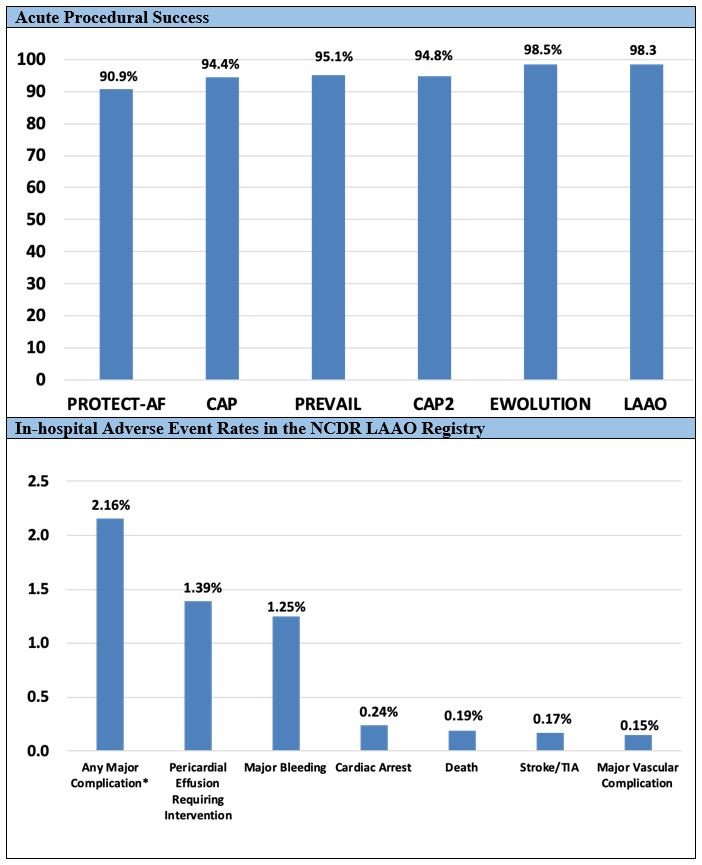 These data from the LAAO Registry demonstrate that patients undergoing commercial WATCHMAN left atrial appendage closure in the United States are older and at higher thromboembolic and bleeding risk than individuals participating in the pivotal trials and most earlier registries, with a mean CHA2DS2-VASc score of 4.6 and a mean HAS-BLED score of 3. Most patients in the LAAO Registry had relative or absolute contraindications to long-term anticoagulation, including a 69% rate of prior bleeding and a 12% rate of intracranial bleeding. In comparison, only 13.3% of the patients enrolled in the PROTECT-AF and PREVAIL randomized clinical trials had a prior bleeding event.

In the PROTECT-AF trial, a device was successfully implanted in 88% (408/463) of patients assigned to LAAO intervention and in 90.9% (408/449) of those in whom implantation was attempted (Figure 2). In the PREVAIL trial, implantation was performed in 95.1% of those in whom it was attempted, suggesting improvement in procedural technique and operator experience overall. In EWOLUTION (Registry on WATCHMAN Outcomes in Real-Life Utilization), a device was successfully deployed in 98.5% of patients, and 0.7% had a residual leak >5 mm, which is comparable to our findings. Our study showed that implantation success rates in contemporary practice are higher than in the PROTECT-AF trial, the PREVAIL trial, and the Continued Access Protocol registries and comparable to the more recent EWOLUTION registry, reflecting possible improvement in patient selection, procedural protocols, and operator technique over time.

The LAAO Registry is the largest registry of patients undergoing percutaneous LAAO procedures in the world. Hospital and physician procedural volumes vary substantially. The 38,000 patients enrolled in the LAAO Registry between 2016 and 2018 were at higher risk of both stroke and bleeding than those who participated in the clinical trials that led to FDA approval of the WATCHMAN device. However, despite this more complex patient population, implant success rates in contemporary practice were higher and in-hospital major adverse event rates were lower compared with those reported in the pivotal randomized trials. The LAAO Registry demonstrates the value of national registries to evaluate technologies as they are adopted in clinical practice and serves important roles for the clinical, scientific, and regulatory communities.