Cardiovascular disease remains the leading cause of mortality and morbidity in the modern era of medicine.1 There have been numerous research studies focusing on cardiovascular prevention strategies to help prevent future acute ischemic events by slowing the progression of atherosclerosis and reducing the risk of plaque disruption and superimposed thrombosis.  Myocardial viability assessment has been on the end of this spectrum and was designed to select patients with ischemic cardiomyopathy that may exhibit reversal of the myocardial dysfunction.

Acute and recurrent ischemic events lead to ischemic cardiomyopathy that is associated with recurrent hospitalizations, poor quality of life, and increased mortality. This process can be reversed if we can identify dysfunctional but viable myocardial cells in patients with ischemic cardiomyopathy. Over the last decades the ability to detect viable myocardium has increased with emerging technologies in cardiovascular imaging and continues to evolve as technology grows.

Despite all the advances in detecting viable myocardial cells, viability imaging has not been proven to have an impact on clinical outcome after revascularization in prospective studies.2,3 This article will review the current role of non-invasive myocardial viability assessment in the clinical practice and summarize the key points in the recently published state of the art document on imaging for myocardial viability document from the American Heart Association (AHA).4

With chronic reduction in myocardial blood flow, activation of the several pathways leads to inflammation, apoptosis, necrosis and eventually a scar tissue formation. When the blood supply is markedly decreased but not totally disrupted, the myocardial damage may be of a lesser degree; myocardial cells would still be viable and potentially regain their function after the blood supply restored. There are two different types of myocardial dysfunction in the setting of ischemia: hibernation and stunning.

Persistently decreased blood supply may induce down-regulation of the myocardial function in hibernation, whereas stunning refers to impaired contractile function despite normal resting flow.5,6 Regardless of the blood flow, coronary flow reserve is decreased in both types of myocardial dysfunction, which eventually leads to structural and functional alterations in the myocardium by causing demand ischemia. There can also be a decrease in coronary flow reserve in patients with no epicardial flow limiting disease but with severe microvascular dysfunction. Fibroses or infarcted tissue has detrimental effects on myocardial remodeling and is associated with adverse outcomes; however, even hibernating myocardium may serve as a substrate for cardiac arrhythmias and increase the risk of sudden cardiac death.7

Dobutamine stress echocardiography has been widely used to assess myocardial contractility and viability. With continuous dobutamine infusion, myocardial perfusion initially increases along with contractility, but as dobutamine dose increases, the blood flow cannot be escalated further, resulting in reduced contractility. This phenomenon is known as biphasic reaction that predicts recovery of the myocardial function after revascularization.8

Speckle tracking echocardiography is another emerging modality that can accurately estimate left ventricular recovery after myocardial infarction. The echo contrast perfusion imaging that detects cardiac microvascular integrity is also promising; however, due to highly variable reproducibility, its utility for viability assessment will require further investigations.9

In the recent decades, single-photon emission computed tomography (SPECT) and positron emission tomography (PET) have been widely utilized to assess myocardial viability. Being a potassium analog, thallium can be used to detect myocardial cell membrane integrity via Na/K ATPase channels, where viable cells demonstrate delayed uptake as compared to resting imaging.10 Unlike thallium, technetium-based SPECT does not demonstrate a delayed distribution.11 In the recent decades, thallium has rarely been used due to increase in ionizing radiation as compared to technetium.

Another commonly used nuclear imaging modality to assess myocardial vitality is cardiac PET. In a healthy myocardium, the energy source derives from fatty acids, whereas in an ischemic state it shifts towards glucose-based metabolism. 18F-fluorodeoxyglucose (18F-FDG) can detect this shift in viable myocardium. The usual assessment for viability consists of rest imaging and metabolic imaging with 18F-FDG. In areas without resting perfusion as shown with N-13 ammonia or rubidium-82, presence of 18F-FDG uptake indicates viability. Compared to SPECT, PET has higher spatial resolution, lower radiation, and has better attenuation correction. Of note, in patients with insulin resistance, FDG update in normal area may remain less than that of ischemic or hibernating regions. One limitation of PET is the variability of FDG update, which can be impacted by cardiac output, heart failure, degree of ischemia and sympathetic activity.12

When ischemia persists, myocardial apoptosis and necrosis occurs, which results in increased extracellular space that can be detected by late gadolinium enhancement (LGE) cardiovascular magnetic resonance (CMR). In patients with chronic ischemic cardiomyopathy, the transmural extent of LGE predicts the reversibility of the myocardial contraction after successful revascularization.13 While minimal LGE (<25%) in a dysfunctional myocardial segment indicates a high likelihood of recovery, the chance of recovery in a >50% LGE of transmural infarct is very low.13 In that regard, LGE CMR provides useful information to guide revascularization. In segments with borderline LGE involvement (25-50%), the recovery prediction with LGE is not strong enough.13

Among all the studies above, LGE percentage of wall thickness has the highest sensitivity (95%), and dobutamine stress CMR has the highest specificity (91%) to predict regional myocardial recovery, while dobutamine stress echocardiography demonstrated good predictability with 80% sensitivity and 78% specificity. SPECT (87%, and 83% for thallium and technetium imaging respectively), and PET (92%) based nuclear viability studies have good sensitivity; however, specificity has been lower compared to other modalities (<70%).14-16

The Role of Viability Imaging in Clinical Practice

The authors of the State of the Art: Imaging for Viability4 proposed two different algorithms in patients with chronic (Figure 1) and subacute (Figure 2) ischemic cardiomyopathy. For both algorithms, it is important to assess several factors that include the symptoms, target vessels for revascularization and the degree of remodeling. 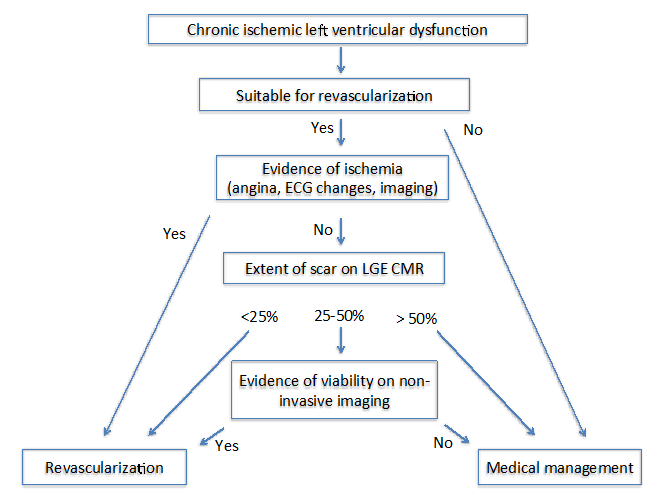 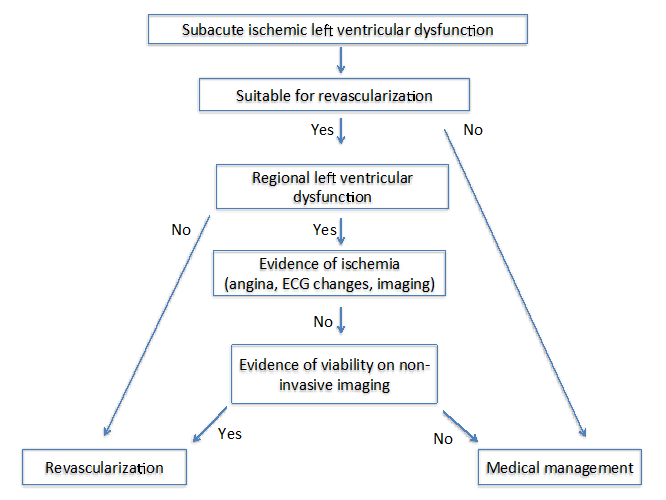 The Impact on Viability Assessment on Outcome

Of note, in the STICH trial, the viability was assessed with dobutamine stress echocardiography or SPECT. However, similarly in the F-18-fluorodeoxyglucose positron emission tomography imaging-assisted management of patients with severe left ventricular dysfunction and suspected coronary disease (PARR-2) trial, the outcome was not different when viability was assessed via PET in patients with ischemic cardiomyopathy undergoing CABG.17 It is unclear why viability did not have an impact on outcome after revascularization as compared to medical therapy; it could be due to successful implementation of the medical therapy, or it could simply reflect the complexity of the decision-making in those patients, where several other risks factors play a role beyond an imaging modality.

Although myocardial viability has not been shown to have an effect on survival after revascularization, it could still play a role in clinical practice, especially in high-risk patients with advanced age or with significant comorbidities where risks and benefits of the revascularization remain unclear. In patients with ischemic cardiomyopathy and a high Society of Thoracic Surgeons (STS) risk score, the management is complex and future trials should continue to explore this era with multimodality imaging in consideration of several other risk factors that could affect the outcome.

Underlying comorbidities and patient characteristics should be carefully reviewed to choose the right imaging modality for viability assessment. The decision to use PET or CMR is made on a patient-to-patient basis. PET should be considered when a patient with a large myocardial infarction that was thought to be nonviable by an alternative imaging technique continues to have refractory or symptom limiting angina, heart failure exacerbations despite maximal medical therapy, ventricular arrhythmias, or has a significant coronary artery stenosis where the presence of even a small island of viable myocardium will likely swing the decision in favor of revascularization. In patients with renal failure or an implanted cardiac device, PET is preferred. In patients with poorly controlled diabetes, severely reduced ejection fraction, with end diastolic thickness less than 6 mm, or those with stenosis in multiple coronary artery distribution, PET should be avoided while in severe claustrophobia, renal failure or presence of implanted devices, the use of CMR is limited and/or contraindicated.

YOU ARE HERE: Home > Latest in Cardiology > Non-Invasive Assessment of Myocardial Viability