Nutrition science has confirmed that the quality of dietary macronutrients (fats, carbohydrates, and proteins) significantly impacts biomarkers and hard endpoints for coronary heart disease (CHD). These data have led to evidence-based recommendations to restrict dietary saturated fats (SFAs), refined carbohydrate (CHO) foods, and protein from animal sources, and to replace these with unsaturated fats, unprocessed CHO in the form of whole grains, fruits and vegetables, and proteins from plant sources.1,2 However, 25 years into the twin epidemics of obesity and type 2 diabetes (T2DM), a class of therapeutic diets focused primarily on the distribution of macronutrients has grown in popularity. These diets restrict CHO intake to varying degrees, liberalize fat intake, and side-step many of the dietary recommendations above. The most extreme of these, the very-low-CHO-diet/ketogenic diet (VLCD/KD), has been reported to induce weight loss without hunger and, in those with pre-diabetes or T2DM, to markedly improve blood glucose and triglyceride (TG) levels. However, recent reviews and summaries of randomized controlled trials (RCTs) and cohort data with long-term follow-up, including by the National Lipid Association,3 provide important perspective. This review will help you understand and recognize VLCDs, determine whether they are truly ketogenic, and identify potential risks or benefits for individual patients.

Severe dietary CHO-restriction induces marked and rapid effects on intermediary metabolism. Glycogen stores become rapidly depleted, insulin levels fall, and free fatty acids (FFAs) are mobilized from peripheral fat stores. Once in the liver, FFAs undergo mitochondrial beta-oxidation to form acetoacetyl-CoA and, eventually, the ketone body beta-hydroxybutyrate (ßHB). After secretion into the circulation, ßHB becomes a fuel molecule for the brain and other tissues, where it is turned back into acetyl-Co-A and enters the TCA cycle.4 ßHB also plays roles in cholesterol synthesis and de novo lipogenesis and, based on newer data, in cellular pathways that influence gene transcription, cell redox potentials and oxidant stress, the latter with favorable effects in some tissues.5

A wide range of CHO-restricted diets exists (Table 1). VLCDs restrict CHO to <50 grams/day (or < 200 kcals/day since each gram of CHO provides 4 kcals of energy). This amounts to <10% of total daily energy (TDE), or calories, from CHO for the average 2,000 kcal/day diet, an amount far lower than the recommended acceptable macronutrient range for CHO, which is 45-65% of total calories, or 225-325 grams of CHO per day for a 2,000 kcal/day diet.6 The most practical way to recognize whether a patient is following a VLCD is to query them about what they are eating, noting the absence of breads, cereals, grains, legumes, starchy vegetables, fruits, and grain-based desserts.

If calories are kept equal, it follows that a VLCD must be higher in protein and/or fat. However, VLCDs that are too high in protein cannot be ketogenic, as several amino acids are glucogenic and suppress ketogenesis.7 Thus, a true KD limits protein intake to ≤1.5 grams per kilogram (kg) of body weight per day (or 105 grams per day for a 70 kg adult). Individuals on VLCDs who report eating large quantities of beef, pork, chicken, fish, eggs, and dairy products are unlikely achieving ketosis. In contrast, a VLCD/KD that restricts both CHO and protein must, therefore, be very high in fat, typically 70-80% of TDE or calories. Individuals usually report high intakes of butter, cheese, coconut oil, beef and pork (which are high in SFAs), olive, canola, or avocado oils (high in mono- and poly-unsaturated fats), and whole eggs (high in cholesterol). A mathematical relationship between ketogenic versus non-ketogenic macronutrients, called the Ketogenic Ratio (KR), identifies whether a diet is ketogenic, but is rarely used clinically.8 Medically supervised VLCDs that severely restrict calories to <800 day are usually ketogenic.3

Weight Loss
Compared to high-CHO-low fat diets, VLCDs are associated with greater initial weight loss. One mechanism is water loss: CHO-restriction leads to diuresis. VLCDs/KDs have also been associated with small increases in energy expenditure of 50-200 kcal per day, as well appetite suppression, adipocyte lipolysis, and thermogenesis, all of which also contribute to weight loss.3 However, several meta-analyses and reviews have found that VLCDs are associated with greater weight loss compared to higher-CHO-low fat diets only when both are hypocaloric and only up to 1-2 years, after which weight loss is similar.3  In individuals with pre-diabetes and diabetes, greater weight loss has been observed only up to 6 months.3 Moreover, most studies have shown reduced adherence to VLCDs over time. A large meta-analysis also showed that loss of lean body mass is greater on VLCDs, which can be offset by higher protein intake.3  Based on these and other data, the 2013 Guideline for the Management of Overweight and Obesity in Adults did not endorse VLCDs.9

Glycemic Control
Reducing CHO intake in select individuals with prediabetes or T2DM is a recommendation of the American Diabetes Association,12 and a Class IIb recommendation by the NLA in its statement on VLCDs.3 More recent data have provided additional information. In a 2019 meta-analysis of 19 RCTs of CHO-restriction in T2DM, a small but significant reduction in HbA1c was found only in studies up to 6 months duration, or in studies with a high risk of bias.13 Similarly, in a meta-analysis of 25 studies of CHO-restriction in T2DM, no difference in HbA1c was found in general or in the subgroup of eight studies of VLCDs (<50 g per day); however, a statistically significant decrease in HbA1c of 0.49% (95% CI, -0.75 to -0.23%, P <0.001) was found in the subgroup of five studies of low–CHO diets (i.e., 50 to 130 g CHO/day) over a median follow up of ≤6 months.14 Increased LDL-cholesterol
Elevated low-density lipoprotein cholesterol (LDL-C) levels have been observed in studies of VLCDs and KDs. Mechanisms include high intakes of dietary SFA and cholesterol, and changes in hepatic HMG Co-A, a substrate for cholesterol synthesis during ketogenesis.3-5 A 2006 meta-analysis of five RCTs of low-CHO versus low-fat diets in overweight individuals did not favor low-CHO diets, yielding a weighted mean difference in LDL-C of plus 5.4 mg/dl at 6 months and plus 7.7 mg/dl at 12 months compared to low-fat diets, despite greater weight loss.15 Similarly, in the NLA review, LDL-C was significantly increased in four of seven meta-analyses of studies of CHO-restriction in adults with overweight or obesity, and in six of seven meta-analyses of studies in adults with overweight/obesity and prediabetes/T2DM, although the latter did not achieve statistical significance.3  Importantly, studies of VLCDs/KDs that report median changes in LDL-C mask individual responses, which may be marked. Finally, in a RCT from 2008 that assigned 322 obese subjects to a LCD (vs. a low fat diet vs. a moderate fat Mediterranean) and reported a small 3 mg/dl decrease in LDL-C at 2 years, the CHO restricted dietary intervention was not a true VLCD/KD as CHO intake was 40% of calories by the end of the study, and subjects also received dietitian-led counseling to restrict SFA intake, likely limiting increases in LDL-C.16

Decreased Intake of Beneficial Dietary Components
VLCDs and KDs restrict fiber-rich whole grains, beans, legumes and starchy vegetables, and most polyphenolic-containing fruits, all of which have been associated with reduced CHD risk and, in the case of whole grains, reduced mortality.17,18 Therefore, displacement of foods associated with cardioprotection is a major concern of VLCDs and KDs.

Possible Increase in Mortality
No long-term RCTs have reported the effects of VLCDs/KDs on hard endpoints. However, cohort data suggest caution. In the Atherosclerosis Research in the Community study of 15,000 subjects followed for a median of 25 years, the relationship between CHO intake and risk of total mortality was found to be U-shaped. Mortality risk was highest at a CHO intake of <50% of energy per day (Figure 1), especially when CHO was replaced by animal protein, leading the authors to conclude that "low carbohydrate diets should be discouraged."20 Two other recent analyses have shown similar findings.21,22 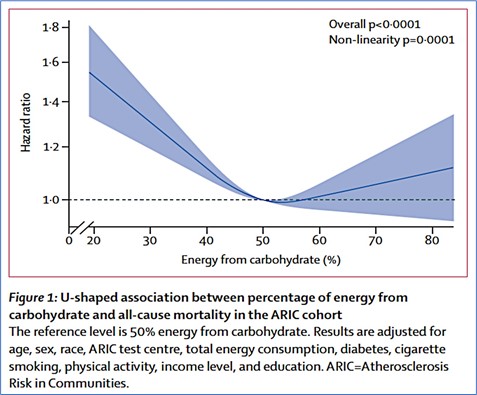 For patients who report following a VLCD or KD, we recommend a clinician-patient discussion that reviews short-term risks and benefits based on the medical history and long-term health goals. As summarized in Table 3, based on RCTs, patients can be informed that hypocaloric (not ad libitum) VLCD/KDs may result in greater weight loss in the short term, but there is not one macronutrient mix that is superior for weight loss in the long term. In patients with diabetes, changes in glycemic control may be small. Moreover, although VLCDs result in greater TG-lowering, diets with less severe CHO-restriction may induce significant reductions in TGs and be easier to adhere to in the long term. Importantly, patients should be informed that VLCDs/KDs may worsen LDL-C levels and cardiovascular health in the long-term. Those with atherosclerosis should be counseled to avoid VLCDs that liberalize SFA intake and to undergo regular lipid testing (a Class–IIa recommendation by the NLA, Level of Evidence – B-R), and be considered for referral to a registered dietitian nutritionist, who can provide guidance on healthier strategies for patients who choose to significantly lower dietary CHO intake.3 Those who have atherosclerosis, atrial fibrillation, heart failure, kidney or liver disease, or who take anti-hypertensive medications or warfarin, should be informed of the need for greater supervision and possible medication adjustments while following a VLCD.3 Patients with strict contraindications to VLCD/KDs include those with a history of hypertriglyceridemic pancreatitis, severe hypertriglyceridemia, or familial hypercholesterolemia, as well as those on SGLT2 inhibitors, which may promote ketoacidosis.3 NLA provides this useful infographic on the potential benefits and risks of VLCD/KDs. Finally, patients should be encouraged to examine long-term health goals, and to re-introduce some amount of beneficial whole grains, fruits and/or vegetables in exchange for improved cardiovascular health, while receiving positive feedback for eliminating refined CHOs from their diets. Motivational interviewing techniques may greatly facilitate these discussions.

YOU ARE HERE: Home > Latest in Cardiology > Very Low Carbohydrate and Ketogenic Diets and Cardiometabolic Risk