Introduction
For several decades, HSCT has been used as curative treatment for many malignancies, hemoglobinopathies, metabolic diseases, bone marrow failure syndromes, and primary immune deficiencies. In brief, HSCT accomplishes disease eradication through high-dose chemotherapy with or without radiation, leading to ablation of a patient's bone marrow, known as conditioning, followed by transplantation of either donor-derived stem cells (allogeneic HSCT) or patient-derived stem cells collected prior to conditioning (autologous HSCT). HSCT allows for the delivery of cytotoxic therapies for the treatment of cancer that a patient would not otherwise tolerate due to prolonged myelosuppression.1,2 Allogeneic HSCT allows for replacement of defective host bone marrow stem cells, for example in the case of primary immune deficiency, and may derive benefits from the donor immune system developing a "graft-versus-tumor" effect that can eradicate underlying disease in the case of malignancy.3 Use of autologous transplants is more common in adults for the treatment of multiple myeloma and lymphoma, and allogeneic transplants are more common in pediatric patients for non-malignant conditions such as immune deficiencies, hemoglobinopathies, and metabolic diseases.1,4

Despite the improvements in survival afforded by HSCT,5 it is associated with significant short- and long-term morbidity and mortality.6 Almost all organ systems can be affected by the cytotoxic effects of the conditioning regimen, resulting cytopenias, and graft-versus-host disease, specifically in patients undergoing allogeneic HSCT. The direct toxic effects of HSCT include mucositis, bleeding, hepatic veno-occlusive disease, thrombotic microangiopathy, infections, delirium, malnutrition, interstitial pneumonia, acute kidney injury, and cardiovascular complications such as cardiomyopathy, arrhythmias, pulmonary hypertension, and pericardial effusions. The incidence of cardiovascular system complications is related to factors such as age at transplant, co-morbid medical conditions, use of cardiotoxic chemotherapy prior to HSCT, autologous versus allogeneic HSCT, and the conditioning regimen employed.6

Long-Term Cardiotoxicity After HSCT
Early reports of HSCT-related cardiotoxicity were published in 1976 and described 29 patients (17 pediatric) with leukemia, aplastic anemia, or metastatic cancer undergoing allogeneic HSCT.7 Post mortem studies revealed interstitial changes with infiltration of immune cells including macrophages and lymphocytes in 5 patients who demonstrated graft-versus-host disease. Extensive myocardial necrosis, fibrin deposits, and extravasation of red blood cells thought to be due to high-dose cyclophosphamide were seen in 2 patients who died from congestive heart failure.

Cardiovascular Disease in Adult Recipients
An observational study of 1,244 patients undergoing autologous HSCT (58% male, mean age of 44 years) reported 5-year incidence of congestive heart failure at 4.8%, rising to 9.1% at 15 years.8 Whether any of these events occurred in the period immediately surrounding HSCT or within the first 100 days post-transplant is not reported. Factors implicated in development of heart failure were older age, hypertension, diabetes mellitus, and prior exposure to anthracyclines at doses ≥250 mg/m2.8 Women were twice as likely as men to develop heart failure. These findings were consistent with an earlier case-control study that showed that pre-HSCT exposure to anthracyclines, number of chemotherapy cycles, and cardiovascular co-morbidities contributed to late-onset (>1 year) congestive heart failure but conditioning regimen and donor source (i.e., allogeneic vs. autologous) did not.9 Almost all (94%) cases of heart failure had reduced ejection fraction at the time of diagnosis. More data are available regarding long-term risks; anthracycline exposure ≥250 mg/m2, pre-existing hypertension, diabetes mellitus, and ischemic heart disease are risk factors for early- and late-onset cardiomyopathy post-HSCT (Figure 1).10,11 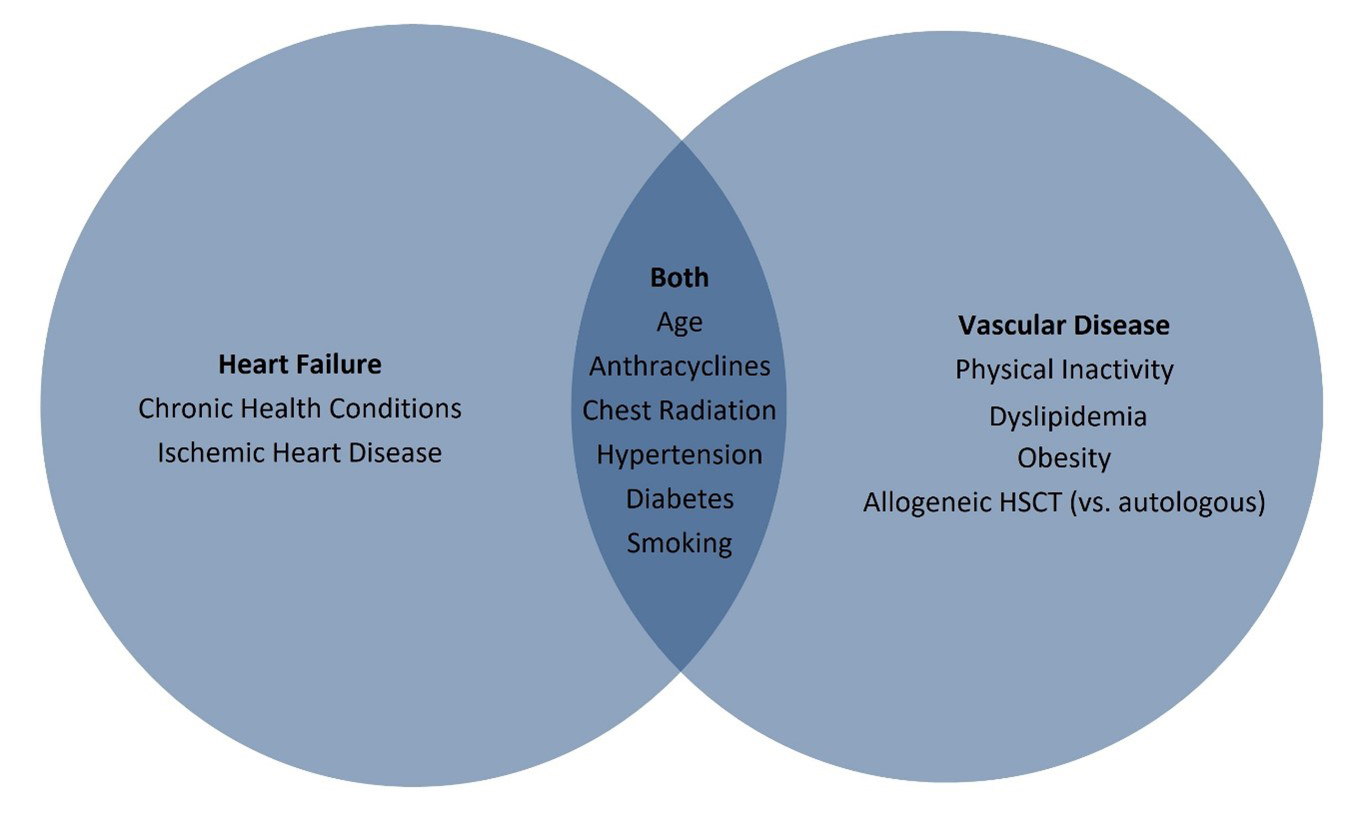 Cardiovascular Disease in Pediatric Recipients
Accurate determination of the incidence cardiovascular dysfunction in pediatric patients after HSCT is limited, and there is wide variation in the data available due to non-standardized definitions of cardiac dysfunction, variability in screening protocols, and recommended intervals for follow-up that may be months to decades. Among 661 children undergoing HSCT between 1995 and 2008 and surviving at least 2 years, coronary artery disease occurred in 0.2%, cerebrovascular accident in 0.6%, cardiomyopathy in 3%, and cardiac-related death in 0.5%; all are greater than the general population. Risk factors for adverse outcomes included anthracycline chemotherapy and history of cranial or chest radiation. Regarding risk factors for cardiovascular disease, dyslipidemia was prevalent in 18% and diabetes mellitus in 7% of patients.21 Another study of 162 children in the first 5 years post-HSCT reported a cumulative incidence of an abnormal left ventricular systolic function of 26%. As in adults, total body irradiation and previous anthracycline chemotherapy were strong risk factors for cardiac dysfunction.22 Similarly, in 95 patients at a mean of 13 years post-HSCT in the pediatric period, the negative predictive value of no exposure to total body irradiation or anthracyclines was 96.7% (95% confidence interval, 83.3-99.8%) for cardiac dysfunction.23 However, not all studies demonstrate a clear relationship between total body irradiation and cardiovascular disease. In a cohort of 826 adolescents and young adults undergoing HSCT for acute myelogenous leukemia, no difference in risk was seen among survivors for 10-year cumulative incidence of myocardial infarction or congestive heart failure regardless of whether they received total body irradiation during the conditioning phase.24

Post-HSCT subclinical cardiac injury has been reported in pediatric patients. In 95 children surviving at least 1 year post-HSCT, cardiac biomarkers were elevated in the first 49 days after transplantation (soluble suppression of tumorigenicity-2 and troponin I) despite normal echocardiography.25 Whether this equates a long-term risk to develop clinically evident dysfunction is not known but suggests the need for some level of prescribed long-term follow-up.

Risk Models
Risk prediction models for cardiac late effects after treatment for cancer and for HSCT have been proposed.26 Much of these data come from the Childhood Cancer Survivor Study, which follows patients treated as children in the 1970s and 90s for a heterogeneous group of cancers, including a small proportion that underwent HSCT. Armenian et al. have created a tool to estimate the risk of heart failure and coronary artery disease by 10 years post HSCT, with variables that significantly impact this risk including age, anthracycline dose, chest radiation, hypertension, diabetes, and smoking history.14 Risk scores are generated to represent low-, intermediate-, and high-risk groups corresponding to 10-year cumulative incidences of cardiovascular disease of 3.7%, 9.9%, and 26.2%, respectively.14 Compared to individuals in the low-risk group, those considered intermediate- and high-risk were 2.9-fold and 7.8-fold more likely to develop cardiovascular disease on follow-up.14

The Charlson Comorbidity Index (CCI) was proposed as an easily derivable score to account for pre-existing co-morbidities in predicting outcomes in patients undergoing allogeneic HSCT, but not all risk was captured.27,28 An alternative score based on the CCI, the Hematopoietic Cell Transplantation Comorbidity Index, assigned a weighted score based on the presence of several cardiovascular parameters: coronary artery disease, congestive heart failure, history of myocardial infarction or ejection fraction <50%, and other comorbidities.29 Although the Hematopoietic Cell Transplantation Comorbidity Index performed better than CCI in predicting non-relapse mortality at 2 years (C-statistic of 0.685 compared to 0.532 for CCI), its discriminatory performance was still only modest. Neither of these scoring systems was developed specifically in pediatric patients.

Conclusion
Cardiac complications may occur in both pediatric and adult patients after HSCT, both in the short and long term. Pre-HSCT cardiac comorbidities are common, particularly in adults. Even in patients undergoing HSCT with no known cardiac disease, use of radiation and anthracycline chemotherapy as part of pre-HSCT malignancy treatment may predispose to events occurring during and after HSCT. Long-term surveillance should be considered, particularly in those patients with known risk factors.