Fact or Fiction: Statins Increase the Risk of Hemorrhagic Stroke

Commentary based on Sanz-Cuesta BE, Saver JL. Lipid-lowering therapy and hemorrhagic stroke risk: comparative meta-analysis of statins and PCSK9 inhibitors. Stroke 2021;Jun 22:[Epub ahead of print].1

Stroke is one of the leading causes of morbidity and mortality, and most strokes are ischemic in nature, either from thrombotic phenomena owing to underlying atherosclerosis and elevated blood cholesterol, or from cardioembolic sources.2 Over the past several decades, there has been significant progress in prevention of atherosclerotic cardiovascular disease (ASCVD) through lowering of blood cholesterol.

The 2006 Stroke Prevention by Aggressive Reduction in Cholesterol Levels (SPARCL) study, involving 4,731 patients, showed that an 80 mg daily dose of atorvastatin reduced the overall incidence of strokes and cardiovascular events in patients with recent stroke or transient ischemic attack, without any known coronary heart disease.3 The study also notably raised the concern of a small increase in incidence of hemorrhagic stroke (HS) with statin therapy.3 Several epidemiologic studies have suggested an association between low blood cholesterol levels and intracerebral hemorrhage;4,5 however, despite this weak association, the overall benefit of stroke prevention made statin therapy one of the most important medical advances in the 21st century.6

There has been ongoing concern that low levels of low-density lipoprotein cholesterol (LDL-C) contributes to HS, given several off-target (not cholesterol-lowering) pharmacological effects including possible mild anticoagulant, antiplatelet, and fibrinolytic effects.7 With the advent of newer cholesterol-lowering medications including proprotein convertase subtilisin/kexin 9 inhibitors (PCSK9i), there is a question of whether such medications may be more advantageous, especially in patients with a history of intracerebral hemorrhage or increased propensity to develop intracerebral hemorrhage.8 A recent comparative meta-analysis investigated this further by analyzing prior trials of statin and PCSK9i therapy and rates of HS in these patient populations.

Rates of HS in Trials of Statin Therapy and PCSK9i Therapy

The authors conclude that statins may modestly increase the risk of HS while PCSK9i do not. Furthermore, this risk is amplified in a dose-dependent manner, with prior history of vascular brain injury also playing a role. Based on this, they suggest that PCSK9i may be a preferred class of lipid-lowering medication in patients with prior history of HS. 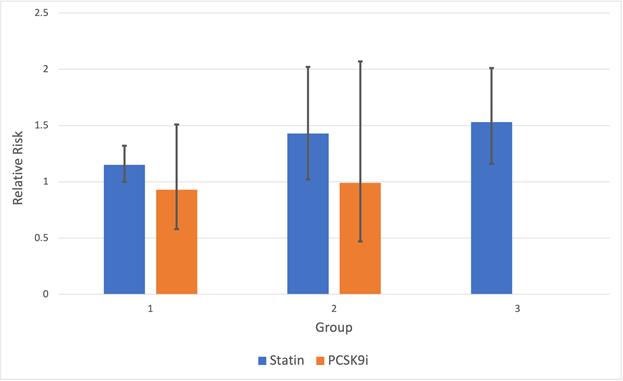 Despite periodic concerns about the potential for statins to cause HS, the benefits of statin therapy on reducing ASCVD events are tremendous. Prior studies have shown weak and inconsistent associations between low blood cholesterol, specifically LDL-C, and a potentially mild increased risk of HS; such associations, however, do not imply causation, due to several confounding factors.

Conditions predisposing to intracerebral hemorrhage – such as alcoholism, malnutrition, frailty, and liver disease – may be observed in individuals with very low LDL-C, in addition to other factors reflective of poor health status.9 Furthermore, statins may also play a role in neuroprotection in spontaneous intracerebral hemorrhage, with clinical studies observing improved functional outcomes and lower mortality rates in patients initiated on or continued on statins after intracerebral hemorrhage.10

The authors of the study conclude that statins modestly increase the risk of HS whereas PCSK9i do not, and given those findings, PCSK9i may be a preferred agent for lipid-lowering in patients with elevated risk of HS. Their explanation for this observation pertains to statins having off-target, antithrombotic effects.

The conclusions of the study will need to be taken into clinical context and interpreted judiciously. If antithrombotic effects with statins were clinically significant findings, one might expect to find an increased incidence of generalized bleeding owing to this effect, versus isolated intracerebral hemorrhage specifically. Furthermore, one must consider the era in which many of the statin trials were conducted versus the PCSK9i trials, as there may be other factors playing a role, such as strictness of blood pressure control in the different patient populations. The Forest plot analyses convey statistical significance (P < 0.05) for relative risk of statins and HS in patient groups 1-3, but do not reach statistical significance for group 4 which included patients with a prior history of HS. Moreover, the patients analyzed in the PCSK9i trials were those that were taking PCSK9i usually in addition to maximally tolerated statins, which may further complicate and confound the results.

Overall, given the lack of clear causation and presence of confounders, clinical practice should not change in response to the results presented in this meta-analysis. The benefits of statin therapy in reducing ASCVD risk – including the reduction in risk of myocardial infarction, cardiovascular death, and ischemic stroke – greatly outweigh the reported small increase in incidence of HS. More studies are warranted to further investigate the association between statins, low LDL-C and HS, before implying any specific causation between these variables.

YOU ARE HERE: Home > Latest in Cardiology > Fact or Fiction: Statins Increase the Risk of Hemorrhagic Stroke