Risk-Guided Surveillance for Cardiomyopathy in Survivors of Childhood Cancer

Introduction
Survivors of childhood cancer exposed to anthracyclines, mitoxantrone, and/or chest-directed radiotherapy are at increased risk for heart failure.2 Echocardiographic surveillance frequency recommendations from the International Late Effects of Childhood Cancer Guideline Harmonization Group (IGHG) are currently based on cumulative exposures to anthracyclines and chest-directed radiotherapy.3 Whether intermediate echocardiographic results obtained during surveillance can refine future risk estimations and may be used to update surveillance frequency recommendations is a topic of interest.

Study Question
What is the added value of LVEF from an initial surveillance echocardiogram for predicting a clinically relevant LVEF <40% during follow-up in asymptomatic survivors of childhood cancer treated with cardiotoxic cancer therapies?

Methods
A retrospective study in two cohorts of long-term survivors of childhood cancer in the Netherlands was conducted. Inclusion criteria were previous exposure to cardiotoxic treatment (anthracyclines, mitoxantrone, and/or chest-directed radiotherapy), age ≥18 years, and survival of ≥5 years after cancer diagnosis at the first available surveillance echocardiogram. In addition, ≥2 follow-up echocardiograms had to be available not more than 5 years apart (in accordance with current IGHG recommendations). Exclusion criteria were heart failure symptoms or LVEF <40% before or at the initial surveillance echocardiogram. 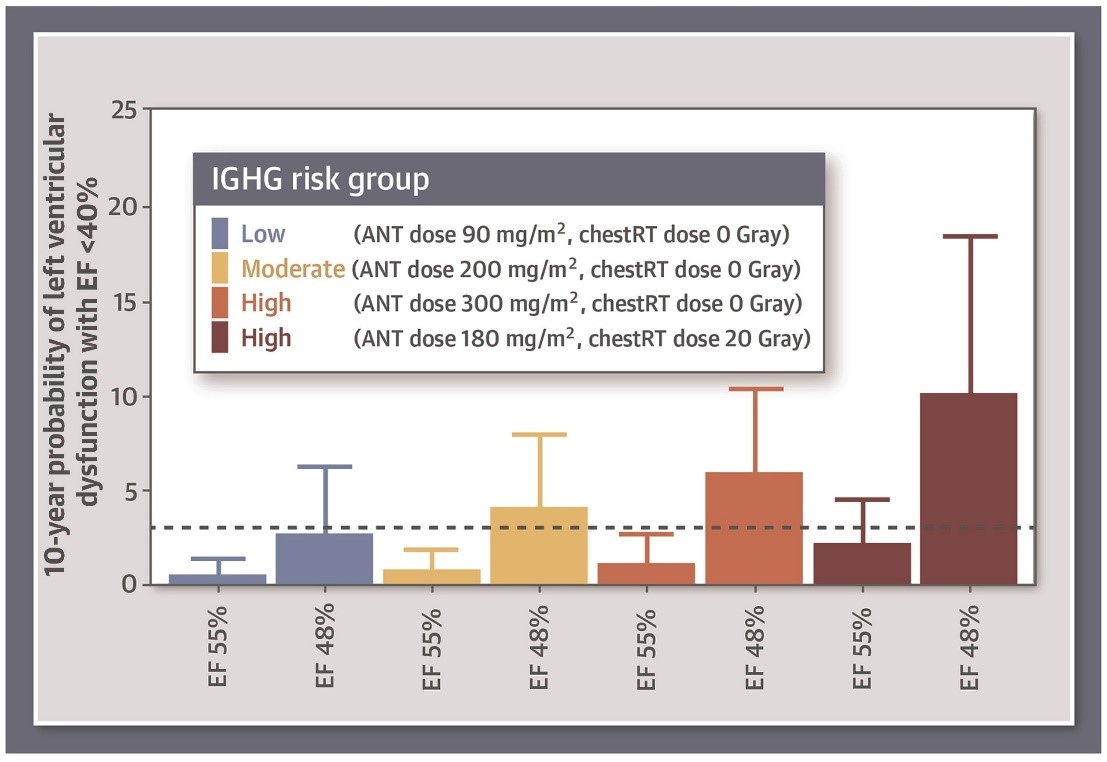 Graph shows predicted probabilities for developing LVEF <40% within 10 years in individual survivors. In colors, the risk categories (low, moderate, or high) are presented according to the IGHG.4 In each IGHG risk category, the 10-year probability of left ventricular dysfunction with LVEF <40% is compared between a survivor with an initial surveillance LVEF of 48% and a survivor with an initial LVEF of 55%. Bars represent the risk estimate; error bars represent the 95% CI. Reprinted with permission from Leerink JM, van der Pal HJH, Kremer LCM, et al. Refining the 10-Year Prediction of Left Ventricular Systolic Dysfunction in Long-Term Survivors of Childhood Cancer. JACC CardioOncol 2021;3:62-72.1

Conclusions
In survivors of childhood cancer, LVEF measured with a surveillance echocardiogram at a median of 17 years after cancer diagnosis improves the risk stratification for a therapeutically relevant decreased LVEF <40% in addition to anthracycline and chest-directed radiotherapy dose.

Perspective
This study demonstrates that LVEF results from a surveillance echocardiogram can be used to refine risk estimates for cardiomyopathy in long-term survivors of childhood cancer exposed to cardiotoxic cancer treatments (Figure 1). Results of this study add evidence to a recent simulation study showing that surveillance is not cost effective in survivors in the IGHG low-risk group (anthracycline dose <100 mg/m2 and chest-directed radiotherapy dose <15 Gray).4 In addition, the current study shows that survivors in the IGHG moderate risk group (anthracycline dose 100-249 mg/m2 or chest-directed radiotherapy dose 15-34 Gray) can be reclassified to a low-risk category based on LVEF. Although an increased risk of developing a LVEF <40% was demonstrated in survivors with an intermediate LVEF of 40-49% (HR 7.81; 95% CI, 2.07-29.50), the externally validated prediction model's main application is to reclassify ±75% of survivors into a low-risk category in whom surveillance frequency can potentially be safely reduced (i.e., once every 10 years). Replication in other cohorts is desirable, preferably from other countries. Further improvements in risk stratification are expected to come from additional predictors such as genetic variants, traditional cardiovascular risk factors, and other echocardiographic parameters, as well as different methods of modeling.

YOU ARE HERE: Home > Latest in Cardiology > Risk-Guided Surveillance for Cardiomyopathy in Survivors of Childhood Cancer