Poll Results: P2Y12 Use Based on Genetic Testing

In our most recent poll, we asked responders when they would consider genetic or platelet reactivity testing to assess individual response to clopidogrel. The most popular choice was in patients with recurrent events while on clopidogrel (65%). Relatively similar choices each selected by 10-13% of respondents included any patient undergoing percutaneous coronary intervention (PCI) if clopidogrel is the intended P2Y12 inhibitor (13%), patients presenting with acute coronary syndromes (12%), and never perform genetic or platelet reactivity testing (10%).

A variable yet likely significant proportion of the population will display poor biological response to clopidogrel. Multiple, but not all, studies have documented increased event rates among poor responders undergoing PCI treated with clopidogrel. Despite this association, most randomized trials using genetic testing or platelet reactivity testing to tailor antiplatelet therapy have failed to demonstrate a clear benefit. Potential study flaws included limited power and inclusion of low-risk individuals. The TAILOR-PCI (Tailored Antiplatelet Initiation to Lessen Outcomes due to Decreased Clopidogrel Response After Percutaneous Coronary Intervention) study epitomizes prior results because it failed to meet its primary endpoint but showing potential benefit in higher risk groups, especially in the first 3 months following PCI. Current American College of Cardiology and American Heart Association guidelines do not recommend genetic or platelet reactivity testing.

Reflecting this lack of definitive support from randomized trials and guidelines, most responders to our poll would only test individuals at higher risk such as those with recurrent events while on clopidogrel. 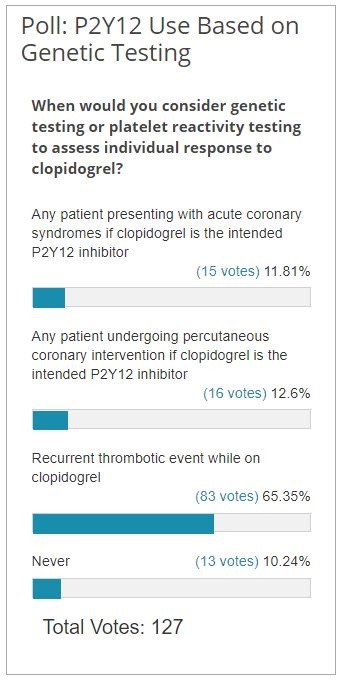 YOU ARE HERE: Home > Latest in Cardiology > Poll Results: P2Y12 Use Based on Genetic Testing