Air Pollution and the Erosion of Heart Health

Though it is well known that pollution is detrimental to health, this concept is often overlooked in disease prevention programs, medical education, and routine clinical practice. A recent New England Journal of Medicine review delves into the impact of pollution on global cardiovascular disease (CVD) burden and provides evidence-based strategies to mitigate pollution exposure at both the individual and societal levels.1 The Global Burden of Disease (GBD) consortium found that pollution accounted for 9 million deaths worldwide in 2019. Of these, over 5 million were due to CVD.2

Air pollution, both ambient and household, is the fourth leading cause of death and disease worldwide.3 Ambient (outdoor) air pollution was responsible for an estimated 4.1 million deaths worldwide in 2019 and is a mixture composed of particulate matter (PM) categorized by particle size and gases such as nitrogen oxide, sulfur dioxide, carbon monoxide and ozone. These particles and gases primarily arise from fossil-fuel combustion from stationary sources such as power plants and mobile sources such as trucks, cars, and ships.

Household (indoor) air pollution was responsible for 2.3 million deaths in 2019. In low-income countries, indoor pollution composition occurs secondary to the combustion of biomass fuels such as wood and charcoal. In high-income countries, natural gas combustion, fireplace residue, aerosol sprays, and volatile cleaning products are the primary culprits. The effect that these factors have on cardiovascular health is amplified in poorly ventilated homes and spaces typical of low-income housing; moreover, it disproportionately affects women and children worldwide. In countries most affected by pollution, pollution-related disease is responsible for one in every four deaths and nearly 92% of all pollution-related deaths occur in low and middle-income countries.3

When PM is inhaled, a cascade of effects occurs. Air pollution initiates a number of different mechanisms that lead to the development of CVD risk factors.4 Exposure to ambient PM2.5 has been definitively linked to hypertension and diabetes as the late-stage event due to chronic, pollution-induced oxidative stress and inflammation. PM inhalation can cause endocrine disruption and persistent inflammation which, if prolonged, may contribute to insulin resistance. Even short-term exposure to ambient PM2.5 has been known to increase blood pressure as well as redox-mediated alterations in vascular and autonomic tone. Within just a few days of elevated exposure to PM2.5, the increase of relative risk of acute cardiovascular events increases by 1-3%.1,4

Long-term exposure to ambient PM2.5 has also been linked subclinical CVD such as left ventricular hypertrophy, increased carotid intima media thickness, and calcification of both the coronary artery and abdominal aorta, which promotes an even greater risk of myocardial infarction and cerebrovascular accidents. Prolonged exposure to PM2.5 at 50μg/m3 doubles the risk of developing CVD.4

The World Health Organization's (WHO) Interim Targets (ITs), established to reduce morbidity and mortality related to air pollution, are also highlighted here. Exceeding IT-1, annual mean PM2.5 concentration of 35 μg/m3, is associated with a 15% increased risk of mortality. Though the WHO has set a 24-hour PM2.5 standard of 25 μg/m3, many major cities around the globe have peak daily levels that exceed this value, sometimes drastically so, as depicted in a 2019 article published in the New York Times.5

On these cities' worst air quality day in 2019, Manhattan had a PM2.5 level of 41 μg/m3, Los Angeles had a level of 106 μg/m3, and San Francisco had a level of 197 μg/m3.  PM2.5 values in some countries outside of the United States (US) were recorded at even higher levels, with Beijing's worst air quality index (AQI) day in 2019 reaching 251 μg/m3 and New Delhi's reaching a staggering PM2.5 of over 900 μg/m3.5 Despite global and national air quality guidelines, there is no safe lower limit to PM2.5 concentrations with increases in ischemic heart disease and stroke with even the smallest increases in PM2.5 concentrations (Figure 1).6 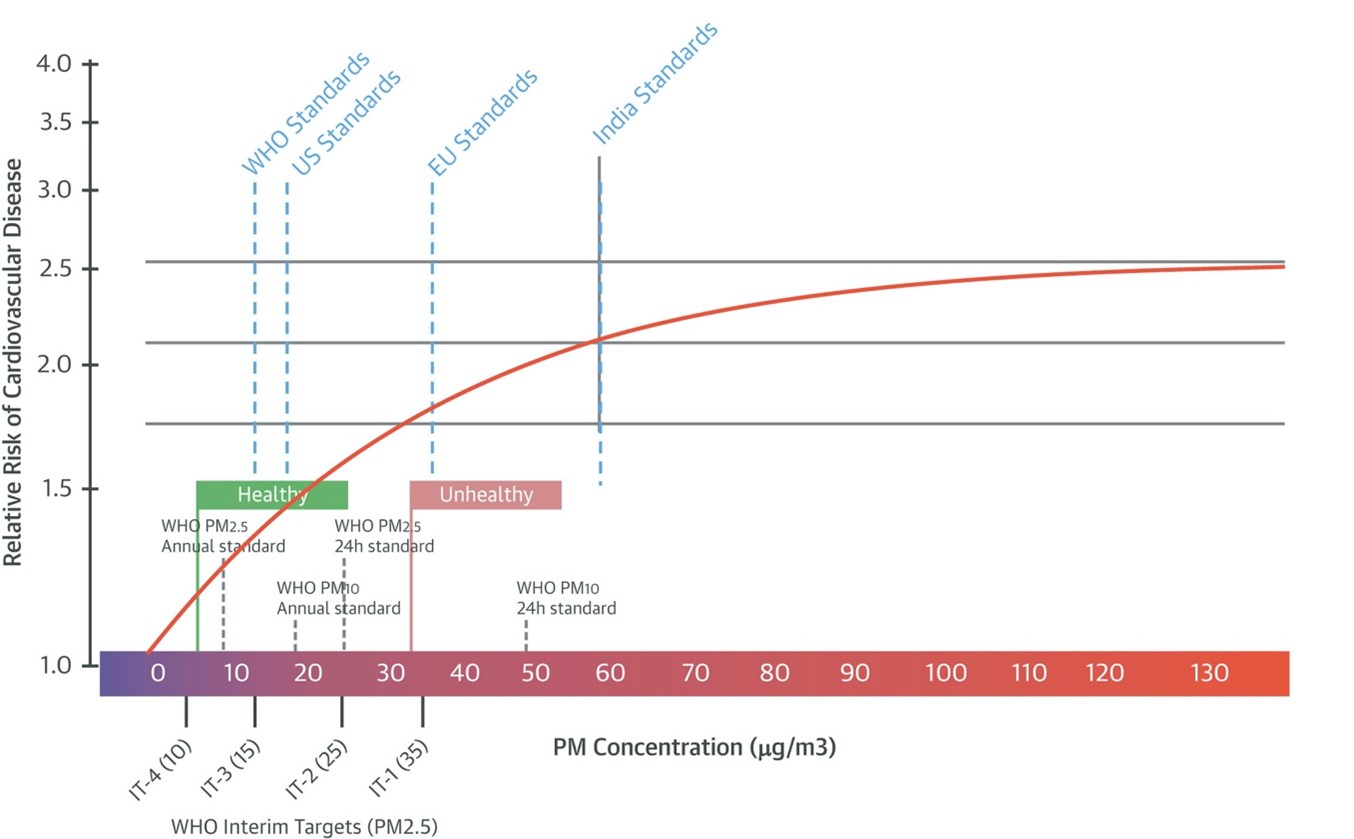 Due to increased awareness of the harmful environmental and health effects caused by pollution, the Clean Air Act was introduced in the US in 1970, which in conjunction with advancements in cleaner technology, has helped reduce pollution levels in the US by 70%. Yet pollution continues to be a problem in wealthy countries, who are responsible for approximately 50% of the planet-warming greenhouse gases released from fossil fuels and industry over the past 170 years, despite only accounting for 12% of the global population. But as some nations are improving in lower their CO2 emissions, others are not.

China, which houses 18% of the world's current population, was responsible for approximately 31% of humanity's CO2 emissions in 2021; of note, CO2 has not been regarded as a typical pollutant. Although the US has a higher per capita emission rate (14.2 tons of carbon dioxide) than China (7.4 tCO2), the massive population of China caused a carbon dioxide emission amount that was more than double that of the US in 2021 (10.7 to 4.7 gigatons CO2).7

This highlights some of the challenges faced by less-developed countries, who do not have the infrastructure or capacity to enforce legislature regarding pollution production or the funding to invest and implement cleaner energy sources, thus amplifying the health risk of pollution. Moreover, while the US has improved its air quality since the 1970s, it has not significantly reduced its CO2 production, which is a key driver of climate change. In addition to aiding in the fight against climate change, reducing the use of fossil fuels will also improve air quality index levels.

Air pollution is a global health issue that affects millions of people, both directly and indirectly, and until wide-spread clean energy reform takes place on a global scale, air pollution will continue to be a threat to human health, particularly cardiovascular health. Underlying risk factors, such as diabetes and hypertension, may be further amplified by air contaminants, which lead to an increased risk of heart attack and stroke. The impact of pollution on cardiovascular health cannot be prevented without a local, national, and global response to this increasing threat to mankind.

YOU ARE HERE: Home > Latest in Cardiology > Air Pollution and the Erosion of Heart Health