The Substrate Ablation vs Antiarrhythmic Drug Therapy for Symptomatic Ventricular Tachycardia (SURVIVE-VT) trial compares the efficacy and safety of catheter ablation versus antiarrhythmic drugs (AAD) as first-line therapy in patients with implantable cardioverter defibrillators (ICD) who present with symptomatic ventricular tachycardias (VT).1 In this trial, 144 patients (median age, 70 years; 96% male) were randomized to catheter ablation (71 patients) or AAD (73 patients). The included patients needed to be treated because of the severity of their clinical arrhythmias: 115 patients received an appropriate shock, 7 syncopal VT and 22 non-tolerated VT, and 112 patients (78%) had ≥2 VT episodes.

Patients were 1:1 randomized to complete endocardial substrate-based catheter ablation or antiarrhythmic therapy (amiodarone+beta-blockers, amiodarone alone or sotalol±beta-blockers). The endocardial substrate-based ablation approach is aimed at eliminating all the arrhythmogenic substrate during sinus rhythm avoiding VT induction. This strategy is effective and does not require the tachycardia to be induced multiple times. The conventional ablation strategy requires induction and VT mapping that are generally poorly tolerated. This approach could prolong the procedures, which have been related to increased hospital admissions for heart failure (HF).2 The substrate ablation was followed occasionally by programmed stimulation and ablation of clinical or slow tachycardias that remained inducible. The primary outcome was a composite of cardiovascular death, appropriate ICD shock, unplanned hospitalization for worsening HF, or severe treatment-related complications from enrollment up to the 24-month follow-up.

Efficacy and Safety of Substrate Ablation
Although no differences in shock reduction were observed between the two groups, comparison with the Optimal Pharmacological Therapy in Cardioverter Defibrillator Patients (OPTIC) trial data suggests that substrate ablation is highly effective. At 2 years, 80% of patients in the ablation group and 77% of patients on drugs were free of appropriate shocks, while in the OPTIC study at one year 38% of patients receiving beta-blockers had had an appropriate shock. Substrate-based ablation proved to be quite safe, as serious complications related to the procedure occurred in only 6 patients (8%), all of which resolved completely with no deaths in the first 30 days after ablation.

Adverse Events with AAD
The advantage of ablation over AAD was mainly due to fewer treatment-related adverse events (9.9% vs. 28.8%; HR 0.30; 95% CI 0.13-0.71; P=0.006), especially slow VT undetected by ICD. Slow VTs are not fatal in terms of sudden death, but when long lasting may provoke HF leading to hospitalization and catheter ablation. Undetected slow VT contributed to the observed cardiac hospitalization differences between ablation and AAD (18.3% vs. 37.0%; HR 0.42; CI 0.22-0.82; P=0.011). We do not consider that these slow tachycardias can be easily controlled by reprogramming the defibrillators, since this would imply modifying the detection window with further lengthening over the 60 ms of the initial schedule and a consequent risk of inappropriate shocks. Undetected slow VT is the most likely explanation for why AADs are less effective as the VT cycle increases (Figure 1). 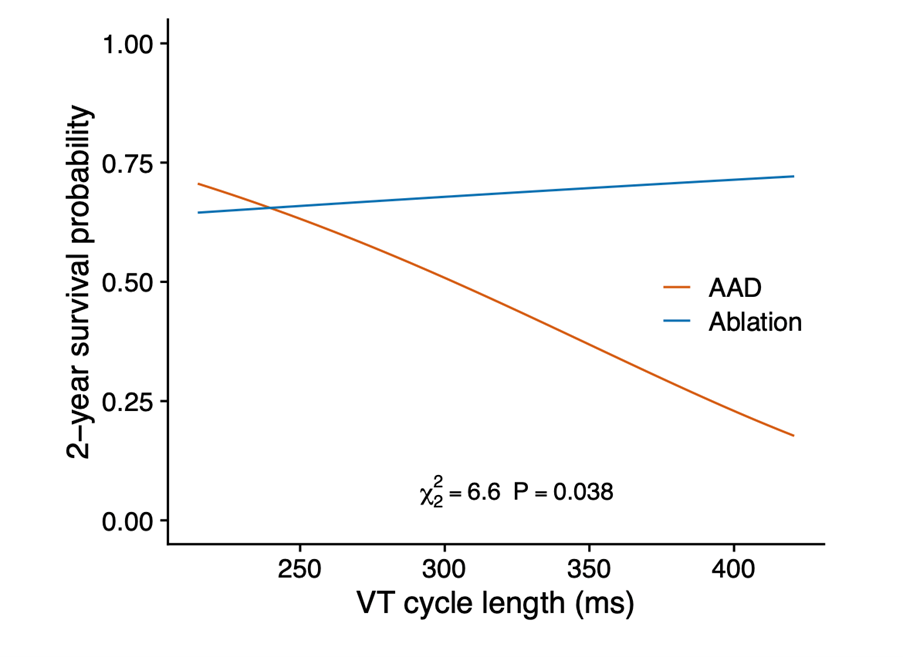 Other adverse events attributed to AAD were not also resolved by ICD reprograming. Bradycardia secondary to the use of drugs was a severe adverse event in patients with single chamber ICD in whom bradycardia control involved ventricular stimulation with its known deleterious effect. In three patients with single chamber defibrillators, amiodarone caused symptomatic bradycardia that could not be managed with device pacing, necessitating withdrawal of beta-blockers or amiodarone, or upgrade to cardiac resynchronization therapy with ICD (CRT-D). No patients with dual chamber ICD or CRT required medical attention for bradycardia secondary to AAD use.

In conclusion, an ablation strategy based on the complete elimination of the arrhythmogenic substrate during sinus rhythm that avoids long procedures with multiple tachycardia inductions is more effective than AAD in a composite end point of cardiovascular death, appropriate ICD shock, unplanned hospitalization for worsening HF, or severe treatment-related complications. This effect is probably greater in patients with single chamber devices and slow tachycardias. 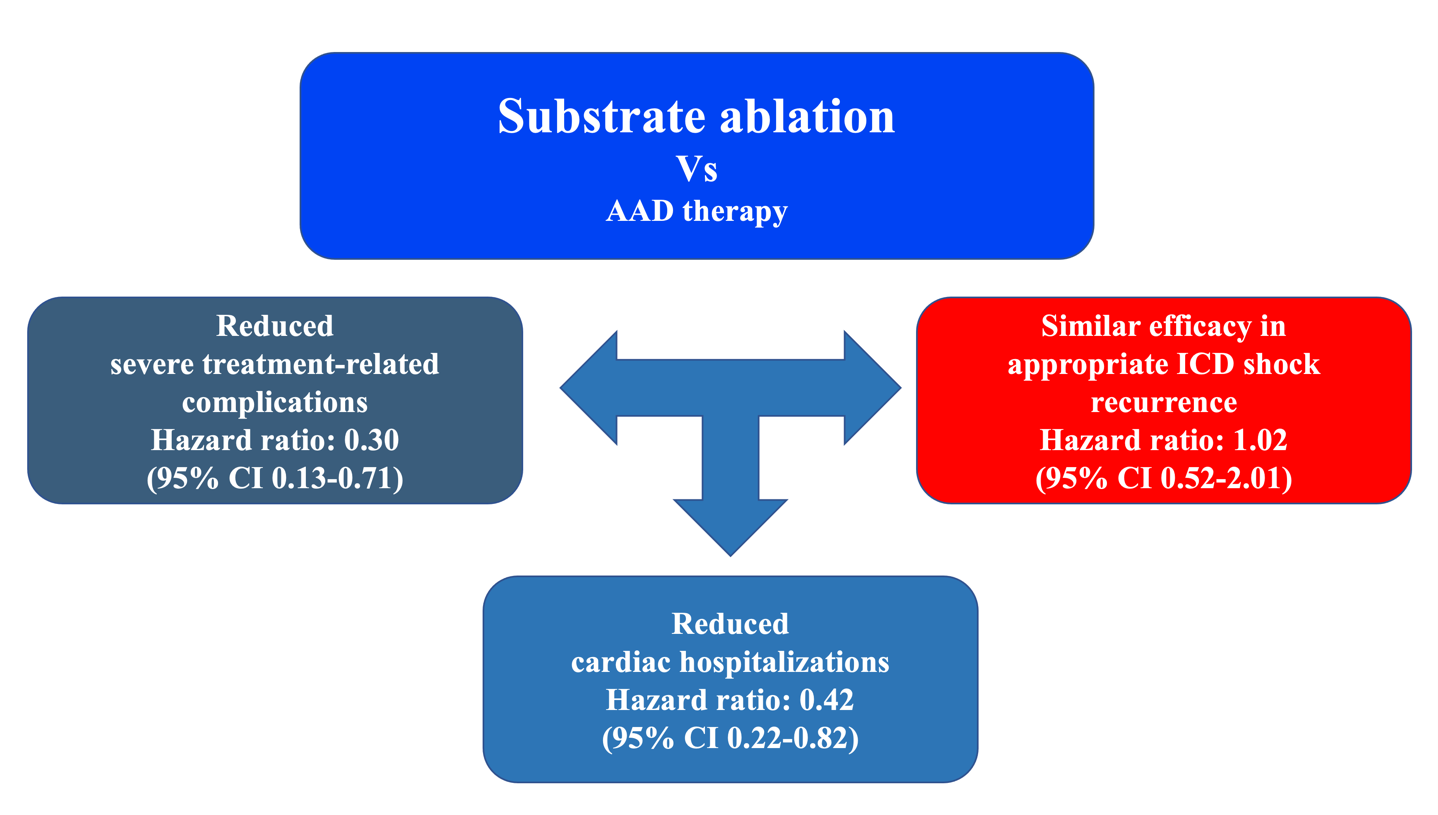