The poll results are based on the clinical vignette of a 65-year-old woman with heart failure with reduced ejection fraction (HFrEF) (EF 35%) with a recent hospitalization for decompensated HF on losartan 50 mg, metoprolol succinate 100 mg and spironolactone 25 mg. As stated in the 2022 American Heart Association (AHA)/American College of Cardiology (ACC)/Heart Failure Society of America (HFSA) guideline for HF management, restricting dietary sodium is a common nonpharmacological treatment for patients with HF symptomatic with congestion, but specific recommendations have been based on low-quality evidence without randomized clinical trial data. The SODIUM-HF trial sought to address this gap in knowledge by randomizing patients with chronic HF to usual care or a low sodium diet of less than 1500 mg/day. The study found no significant difference in clinical events of cardiovascular hospitalization, cardiovascular emergency department visit or all-cause mortality at 12 months.

As the novel SODIUM-HF trial data may lead to actionable changes in clinical practice, we created a survey for HF providers to gauge their current practices regarding sodium restrictions, their interpretation of the SODIUM-HF trial, how the trial might impact their clinical practice, and their perception regarding barriers to implementation of changes to dietary reduction of sodium.

Over 62% of respondents reported SODIUM-HF would not change their practice with one-third reporting they will use patient specific tailored recommendations (34 votes, 36.17%). Of those who reported SODIUM-HF would change their practice, most felt they would be more lenient with sodium restriction (29 votes, 30.85%) versus a few who suggested they would be stricter (6 votes, 6.38%). 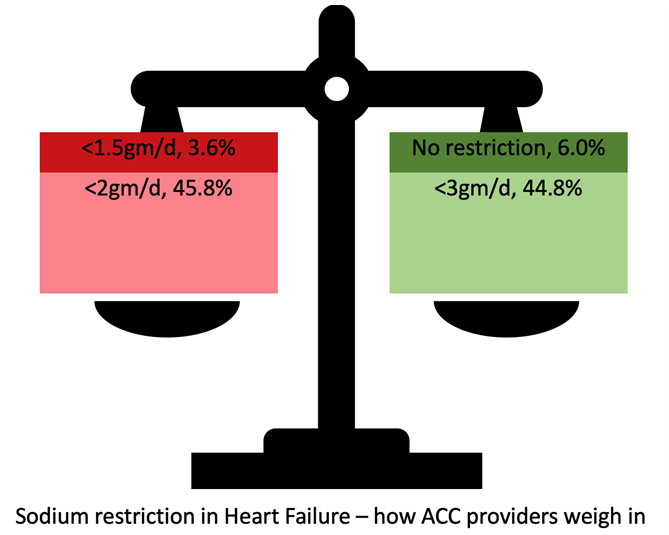 YOU ARE HERE: Home > Latest in Cardiology > Poll Results: Sodium Restriction in Patients With Heart Failure With Reduced Ejection Fraction