When Is it Safe to Resume Driving After ICD Implantation

The clinical indications for use of implantable cardioverter-defibrillators (ICDs) have evolved considerably over the last two decades. Based on the results from multiple clinical trials, ICDs are now recommended both for secondary prophylaxis (following resuscitation from ventricular fibrillation (VF) or sustained ventricular tachycardia (VT)) as well as primary prophylaxis (selected high risk patients without prior cardiac arrest or sustained VT).(1) While ICDs have been consistently shown to improve survival, it has been recognized that these patients remain at ongoing risk of sudden incapacitation that could lead to harm to self or others on the road while driving a motor vehicle. In some ways similar to patients with epilepsy, these patients are unique, since they appear fit to drive but could suddenly and unpredictably become unfit with potentially catastrophic consequences.

Since ICDs treat the arrhythmic manifestations of the underlying cardiac disease and not the disease substrate itself, these patients remain at risk for syncope secondary to VT or VF (despite early shock therapy from the ICD)(2-4) or sudden cardiac death (SCD) (since ICD implantation does not completely eliminate the risk for SCD).(5,6) There is also some risk of incapacitation secondary to the pain and surprise associated with an ICD shock. In any society, driving is restricted to members who do not pose an excessive threat to themselves or others. Since patients with ICDs are potentially at a higher risk for incapacitation while driving, it becomes imperative to quantify the risk posed and then evaluate if their driving needs to be restricted. This mandate needs to be tightly balanced with the knowledge that driving restrictions could have a detrimental effect on patients’ quality of life (including loss of economic viability, independence and added emotional stress).

The Canadian Cardiovascular Society at a consensus conference in 1992 developed a formula to estimate the risk of harm (RH) posed by a driver with cardiac disease (RH = TD × V × SCI × Ac).(7) They estimated that the yearly RH would be proportional to: a) the average percentage of time spent driving (TD); b) type of vehicle driven (V); c) risk of sudden cardiac incapacitation (SCI); and d) the probability of such an event leading to an accident (Ac). This mathematical expression has now become the basis for most recommendations on this issue, with an underlying assumption that an annual RH of 5 in 100,000 could be considered an acceptable risk for driving, a benchmark against which driving risks in patients with ICDs can be compared. Of note, a goal of zero percent risk is not feasible, since both the young and the elderly pose a significant risk by themselves, and by permitting them to drive, society is already accepting a certain amount of risk.

Risk Assessment in Patients With ICDs for Secondary Prophylaxis 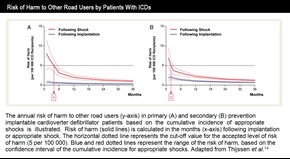 The risk of recurrence of a life threatening arrhythmia, as measured by ICD shocks over a 5-year follow up period, has been reported to be between 55% and 70%.(4,8) The majority of these arrhythmias/ICD shocks, however, have been reported to occur in the first year following ICD implantation, after which the incidence decreases markedly.(8-10) Larsen et al.(11) further reported that the highest incidence was in the first month after implantation, with a consequent reduction in months 2 to 7, followed by a further reduction after that.

The incidence of syncopal episodes with ICD discharges in this patient population was found to be 10-15%.(3,4,10) Similarly, the risk for road accidents in patients with ICDs is reported to be low. In a survey of 452 U.S. physicians who follow patients post ICD implantation, 30 motor vehicle accidents related to ICD shocks were reported over a 12 year period.(12) The estimated fatality rate of 7.5/100,000 patient-years in these ICD recipients was statistically lower than a similar fatality rate of 18.4/100,000 patient-years (p<0.05) for the general U.S population. In a subgroup analysis of the AVID trial,(13) the annual incidence of accidents in the ICD population was estimated to be 3.4% per year, significantly lower than the 7.1%/ person-year accident rate in the general driving population in the USA. Additionally, in a recent study,(14) the yearly RH to other road users was reported to be 1.8/100,000 ICD patients in the first month following implantation, lower than the annual risk of 5/100,000 that is considered acceptable.

Based on the above figures, a scientific statement by AHA/NASPE(15) recommended 6 months of driving restriction for patients who receive ICDs for secondary prophylaxis. On the other hand, the European Heart Rhythm Association (EHRA) through a consensus statement(16) now recommends 3 months of restriction following ICD implantation, which represents a change from their previous recommendation of 6 months. Although studies in the last decade have estimated a lower risk for driving accidents and some even recommended no restriction,(14) for now a 6 month period of driving restriction remains the most current recommendation in U.S. guidelines. Additionally, it should be noted that if a patient refuses an ICD for secondary prophylaxis, apart from warning them about the possibility of a repeat arrhythmic event, a similar period of restriction from driving would be warranted.

Risk Assessment in Patients With ICDs for Primary Prophylaxis

The reported rate of ICD discharges in this patient population has varied, with early generation ICD studies(17,18) finding higher rates (50-60% over 2 years) compared to more recent trials (7.5%/year).(19,20) Also, it has been reported that an average person with an ICD drives about 8-20 miles a day for personal reasons, which is about 2% of the day.(21) Coupled with an annual ICD discharge rate of 7.5%, it has been estimated that the probability of an ICD discharge while driving would be about 0.15% of patients per year.

Based on these figures, the AHA in a consensus statement(22) recommended no private driving restrictions for patients with primary prevention ICDs who are asymptomatic from an arrhythmia standpoint. However, they added that the period immediately following an ICD implantation represents an unstable state whereby the patient-ICD interface is maturing. Since many complications such as inappropriate shocks occur at this stage, it was recommended that private motor vehicle driving privileges be restricted for the period of recovery, approximately one week. In their consensus statement,(16) EHRA reached similar conclusions, but recommended driving restriction for 4 weeks after ICD implantation.

While scenarios such as replacement of the ICD generator with or without lead system change are not specifically covered in the AHA/HRS guidelines, one week of driving restriction would appear to be appropriate, in parallel with the recommendation after an initial system implant. Additionally, in a situation where a patient refuses an ICD for primary prophylaxis, he/she must be cautioned about the potential for a future event, even if no driving restriction is warranted at present.

An ICD discharge, whether appropriate or not, should raise concerns related to the safety of driving again. Whether the original indication was for primary or secondary prevention, it has been recommended that with the occurrence of appropriate therapy for VT or VF, especially with symptoms of cerebral hypoperfusion, driving restriction for 6 months is appropriate. In scenarios of inappropriate device therapy, driving should be restricted until sufficient steps to reduce inappropriate shocks (reprogramming of the device, electrode replacement, or antiarrhythmic medications) are undertaken.

Risk Assessment in Commercial Drivers With an ICD, Either for Primary or Secondary Prevention

Commercial licensing is the purview of federal law. Based on the larger amount of time spent driving and also the larger size of vehicle involved, the risk associated with commercial driving is considered very high. Hence, based on the Cardiovascular Advisory Panel Guidelines for the Medical Examination of Commercial Motor Vehicle Drivers,(23) the presence of an ICD for any indication, either primary or secondary prevention, makes commercial drivers ineligible to drive permanently.

YOU ARE HERE: Home > Latest in Cardiology > When Is it Safe to Resume Driving After ICD Implantation