Hybrid Convergent Ablation for the Treatment of Persistent and Long-Standing Persistent AF: Results of CONVERGE Trial

Introduction
AF affects 33 million people worldwide. Approximately 70% of these people have either persistent or long-standing persistent AF.1,2 Although pulmonary vein (PV) isolation is effective in treating paroxysmal AF, its effectiveness for treatment of persistent forms of AF is limited due to atrial remodeling and increased left atrial (LA) size that occur as AF progresses.3,4

LA Posterior Wall: Substrate for Sustaining AF
In patients with advanced AF, the extra-PV triggers drive and sustain AF.5-7 The LA posterior wall has been shown to have the highest proportion of non-PV triggers and is the most common site for AF re-entrant drivers.7 The posterior wall shares tissue origin with the PVs and has unique electrophysiological characteristics (i.e., short refractory period and high density of autonomic neurons), all of which contribute to initiation and maintenance of AF.8-10 Increased pressure and LA dilation due to prolonged AF cause stretching and inflammation, leading to fibrosis, which contributes to micro-re-entry.11-13 Another phenomenon that occurs as a result of progressive structural remodeling is dissociation of epicardial and endocardial activation patterns, allowing fibrillation waves to propagate between epicardium and endocardium, further adding to fibrillatory conduction.14

Challenges With Endocardial Ablation of Posterior Wall
Due to increasing evidence that the posterior wall provides substrate for maintaining AF, endocardial ablation of the posterior wall has been explored. Despite high acute success, substantial rates of posterior wall reconnections have been reported at repeat electrophysiology procedures, indicating difficulty in creating transmural and durable lesions.15-18

The lack of a standardized lesion set, challenges of achieving transmural lesions, and endocardial/epicardial dissociation in AF together contribute to limited effectiveness of endocardial posterior wall isolation. Furthermore, attempts to improve endocardial lesion depth and durability with higher power, force, or duration may increase procedural risks, including injury to periesophageal branches of vagus nerve and esophageal injury such as atrioesophageal fistula.

The published outcomes of the hybrid Convergent procedure using the contemporary lesion set are favorable.19 These are supported by the results of the CONVERGE (Convergence of Epicardial and Endocardial Ablation for the Treatment of Symptomatic Persistent AF) prospective, multi-center, randomized clinical trial that demonstrated improved effectiveness of the hybrid Convergent procedure over endocardial catheter ablation.20

Figure 1: Effectiveness Through 12 Months Stratified by AAD Use 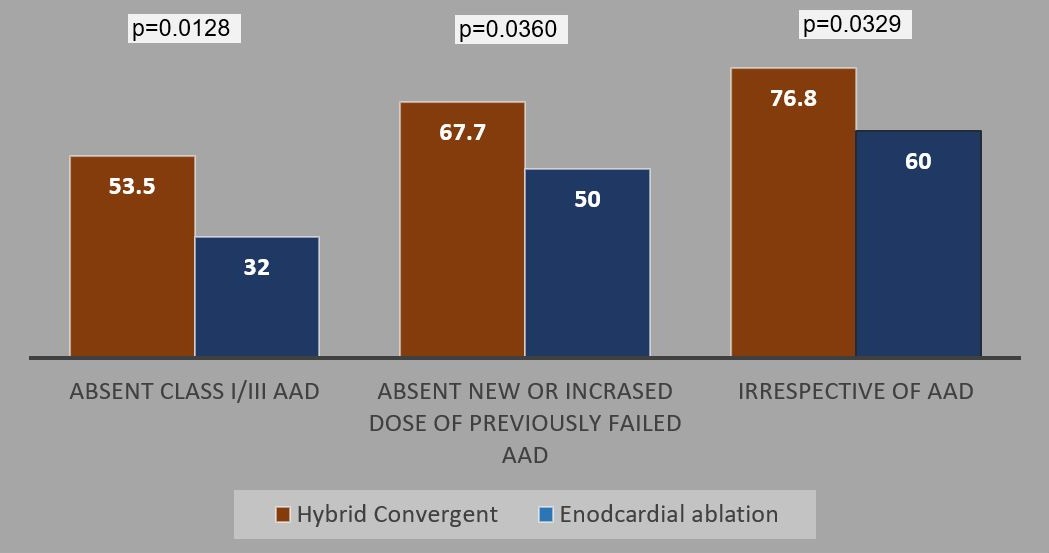 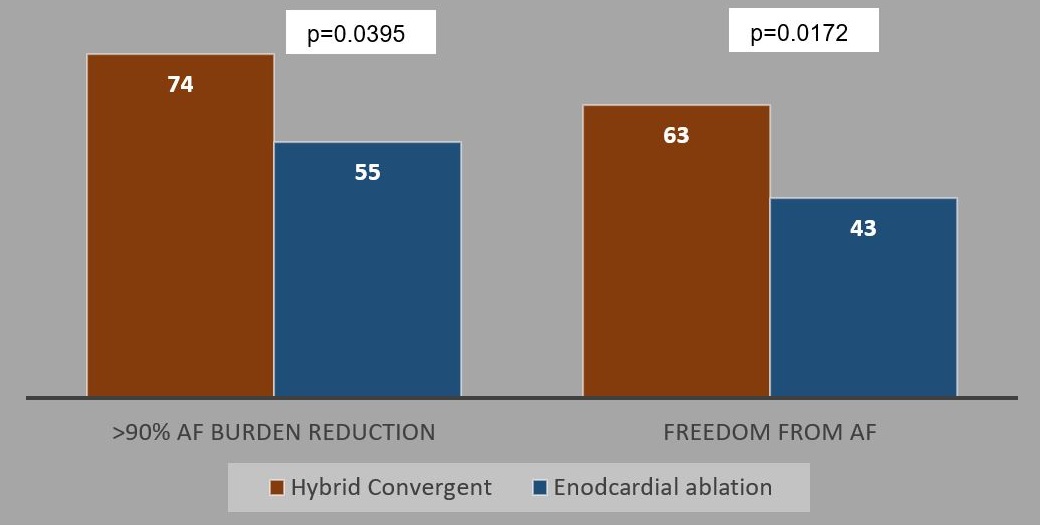 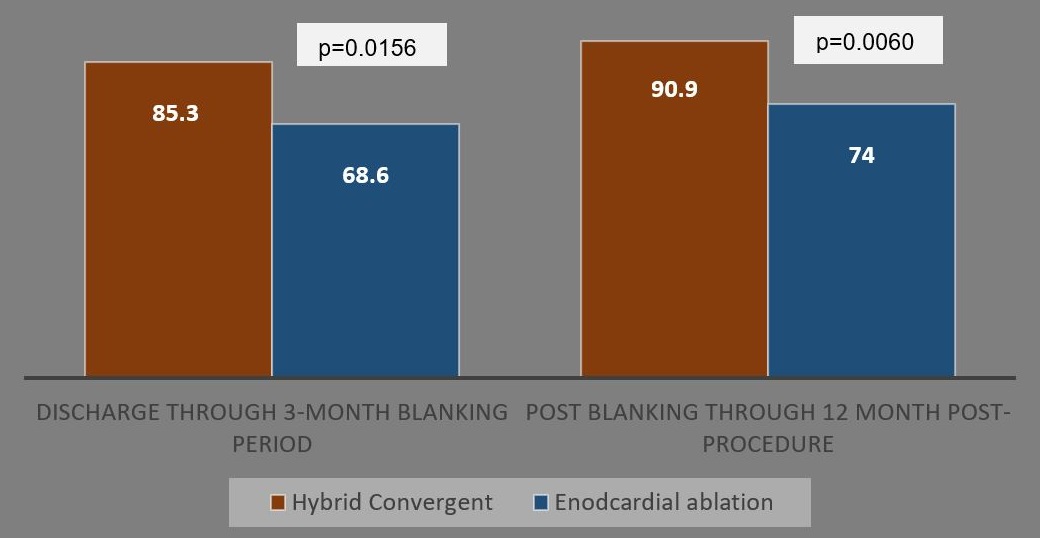 There were no deaths, cardiac perforations, or atrioesophageal fistulas. Three patients (2.9%; 3/102) reported safety events within 7 days post-procedure: 1 each of stroke, excessive bleeding, and excessive bleeding with late pericardial effusion. After day 7 and through 30 days, 5 patients (5/102; 4.9%) reported safety events: 3 pericardial effusions, 1 phrenic nerve injury, and 1 transient ischemic attack. These prespecified events were not reported in the endocardial ablation arm (Fisher exact p = 0.0525). The safety rate in the trial was largely driven by late pericardial effusions. These events were delayed inflammatory response to pericardiotomy and ablation. The symptoms included cough, fatigue, shortness of breath without significant hypotension and resolved with a planned pericardial drainage.

Discussion
The CONVERGE trial is the first multicenter, randomized clinical trial to compare the outcomes of combined epicardial and endocardial ablation to endocardial ablation alone for the treatment of persistent AF. The trial imposed no limits on the duration of AF and allowed patients with substantial LA dilation, making it the only ablation trial thus far to include a large portion of patients with long-standing persistent AF (42%), with a mean duration of persistent AF of 4.40 ± 4.71 years.

The safety of the hybrid Convergent procedure is acceptable. Best practices for management of pericardial effusions such as adequate drain management, anti-inflammatory prophylaxis, and patient monitoring should be implemented for improved safety. Lastly, the study emphasizes collaboration between electrophysiologists and cardiac surgeons for improved outcomes in patients with advanced AF.

Conclusion
The CONVERGE trial demonstrates that a hybrid epicardial endocardial ablation approach has superior effectiveness compared with endocardial-only ablation. These findings have important clinical implications for patients with advanced AF.

YOU ARE HERE: Home > Latest in Cardiology > Hybrid Convergent Ablation for the Treatment of Persistent and Long-Standing Persistent AF: Results of CONVERGE Trial