HCM is a complex myocardial disorder with variegated genetic underpinnings with an apparent common pathobiology defined by enhanced cardiac actin-myosin interactions with resultant hypercontractility at the level of the cardiac sarcomere.1 Downstream cardiac remodeling ensues, leading to abnormalities in diastology, microvascular ischemia, myocyte disarray, and interstitial fibrosis. In two thirds of patients and under the right circumstances, left ventricular outflow tract (LVOT) obstruction occurs, which is associated with worse outcomes.2

With contemporary therapy, observational data remain mixed on the outcomes of patients with HCM, with some single-center data suggesting near normal life expectancy without significant burden of disease,3 and other large multicenter observational data suggesting significant unmet need with excess morbidity and mortality in comparison to the general population.4 Although non-vasodilating beta-blockers, non-dihydropyridine calcium channel blockers, and disopyramide partially alleviate symptoms via reducing LVOT gradients, improving diastolic filling time, and promoting ventricular relaxation, these therapies do not specifically address the underlying pathological mechanisms in HCM or induce favorable remodeling of the myocardium. Aside from symptom management, none of these medications have been effective in deterring the progression of HCM, occurrence of heart failure, and development of interstitial fibrosis.5

Septal reduction therapies (SRT), including alcohol septal ablation and septal myectomy, represent creative anatomical solutions to a complex pathophysiological problem. Both approaches, in experienced hands, are effective in alleviating LVOT obstruction and associated symptoms with relatively low procedurally related morbidity and mortality.6 Due to risks of SRT, however, indications for such therapy are limited to those patients with marked symptoms (New York Heart Association [NYHA] Class III-IV) refractory to medical therapy.7 In contrast to available pharmacologic therapies, post-procedural remodeling has been observed. For instance, several studies have shown a decrease in myocardial mass and left ventricular (LV) wall thickness both in the infarcted and non-infarcted areas at early and midterm follow-up after alcohol septal ablation.8-10 Similarly, studies have shown remodeling of the LV and  left atrium (LA) and changes in diastolic function measures following myectomy.11,12 However, data remain observational and complicated by lack of a control group, loss of follow-up, variable imaging techniques, and their single-center nature.

With these issues in mind, there has been much interest in developing therapies that target the underlying pathobiology of HCM with the goal of having safe and effective therapy that alleviates symptoms, induces favorable cardiac remodeling, and prevents progression of disease and its complications. The lack of new therapies is not due to lack of effort; numerous medications have been trialed in HCM, including losartan, spironolactone, ranolazine, eleclazine, trimetazidine, and perhexiline. None has shown significant improvement to warrant introduction as a treatment option in HCM.13 Most recently, mavacamten, an oral small molecule that acts as a beta-myosin allosteric modulator leading to reversible inhibition of the actin-myosin bridging,14 has been shown to lower LVOT gradient, improve peak oxygen consumption and NYHA class in the EXPLORER-HCM trial.15 Here, we review the available data about mavacamten's effects on cardiac structure and function.

Although there have been more than 1,400 different pathogenic gene variants identified in HCM, the most common variants involve cardiac beta‐myosin heavy chain and myosin‐binding protein C3. Such variants can affect the activity of myosin ATPase, leading to increased myocardial force generation (beta‐myosin heavy chain) or affecting the brake mechanism (myosin‐binding protein C3) and ultimately leading to pathologic hypercontractility.16 In established mouse models of HCM, early chronic treatment with mavacamten suppressed the development of ventricular hypertrophy, myocyte disarray, and myocardial fibrosis.17 In feline HCM, mavacamten reduced contractility, systolic anterior motion of the mitral valve, and LVOT obstruction.18 In vitro studies have shown that mavacamten inhibition of actin-myosin bridging and subsequent decrease in power stroke are independent of the presence of a known pathogenic sarcomeric mutation,14 are calcium-independent (as opposed to disopyramide), and do not affect myosin detachment from actin (i.e., no detrimental effect on active diastolic relaxation).19 A recent study of myocardial tissue from 16 patients who underwent myectomy for oHCM showed consistent sarcomeric proteoform alterations, regardless of the underlying HCM-causing mutations,20 providing insight into how a single agent can have a consistent effect across many genetic variants.

These findings led to further clinical studies in humans. The PIONEER-HCM (A Phase 2 Open-label Pilot Study Evaluating MYK-461 in Subjects With Symptomatic Hypertrophic Cardiomyopathy and Left Ventricular Outflow Tract Obstruction) trial was a phase II, non-randomized, open-label study of mavacamten in 21 symptomatic patients (NYHA Class II-III) with oHCM in which mavacamten was shown to be safe and effective in lowering LVOT gradients and improving peak oxygen consumption.21

The subsequent randomized, double-blind, multicenter, phase III, 30-week on-treatment EXPLORER-HCM trial enrolled 251 symptomatic patients (NYHA Class II-III) with oHCM (> 90% on standard medical therapy; disopyramide was not allowed). Of the 251 patients, 37% treated with mavacamten and 17% on placebo met the co-primary endpoint of either ≥1.5 mL/kg/min increase in peak oxygen consumption and at least 1 NYHA class reduction or ≥3.0 mL/kg/min peak oxygen consumption increase without NYHA class worsening (difference +19.4%, 95% confidence interval, 8.7-30.1; p = 0.0005). Consistent reductions in resting and provoked LVOT gradients and cardiac biomarkers were seen. Overall, mavacamten appeared to be safe. There were 3 patients on mavacamten and 2 on placebo who developed systolic dysfunction during the trial period, and 4 patients who developed systolic dysfunction (left ventricular ejection fraction [LVEF] 48-49%) at the week 30 assessment (end of on-treatment period). Table 1 summarizes the data for these patients. Of note, the discordance in different variables used to assess patients highlights the complexity of what LVEF ≤50% mean in patients receiving a cardiac myosin inhibitor. All but 1 patient who suffered a procedure complication during treatment for atrial fibrillation had recovery of their LVEF. 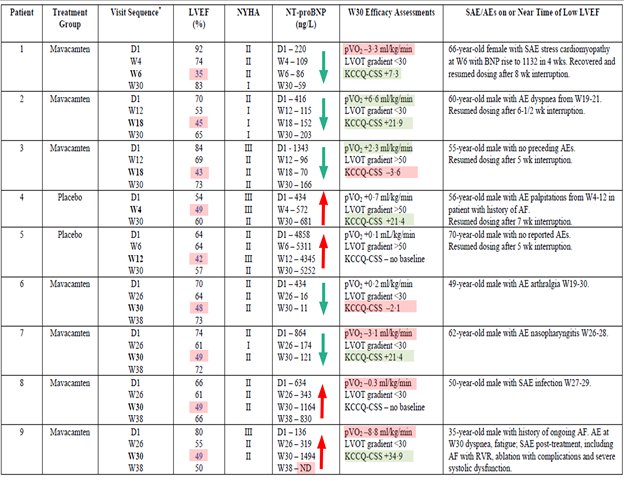 The EXPLORER-HCM CMR substudy showed favorable changes in the myocardium of patients with HCM.22 Although echocardiography is central to the assessment of patients with HCM, CMR allows for a detailed direct characterization of myocardial structure, function, and tissue. This double-blinded substudy included 17 patients treated with mavacamten and 18 patients treated with placebo who underwent baseline and follow-up CMR at 30 weeks using a predefined protocol. Patients on mavacamten had significant favorable structural remodeling compared with patients receiving placebo, including a decrease in LV mass index by 15.8 g/m2, LV mass by 30 g, max LV wall thickness by 2.4 mm, and LA volume index (LAVI) by 10.3 mL/m2 (Table 2). LVEF mean difference between mavacamten and placebo groups was 6.4% without adverse changes in measures of pathologic remodeling including late gadolinium enhancement imaging and extracellular volume fraction.23 One patient in the placebo arm and one in the mavacamten arm who had LVEF reductions were part of the CMR substudy and were asymptomatic. This CMR substudy is the first to show a robust and favorable impact of a pharmacological agent on cardiac remodeling in HCM. Figure 1 and accompanying Video 1 show examples of two patients who were enrolled in the EXPLORER-HCM trial.22

Figure 1: CMR Cine Images at Baseline and at Week 30 for Patients Receiving Mavacamten and Placebo 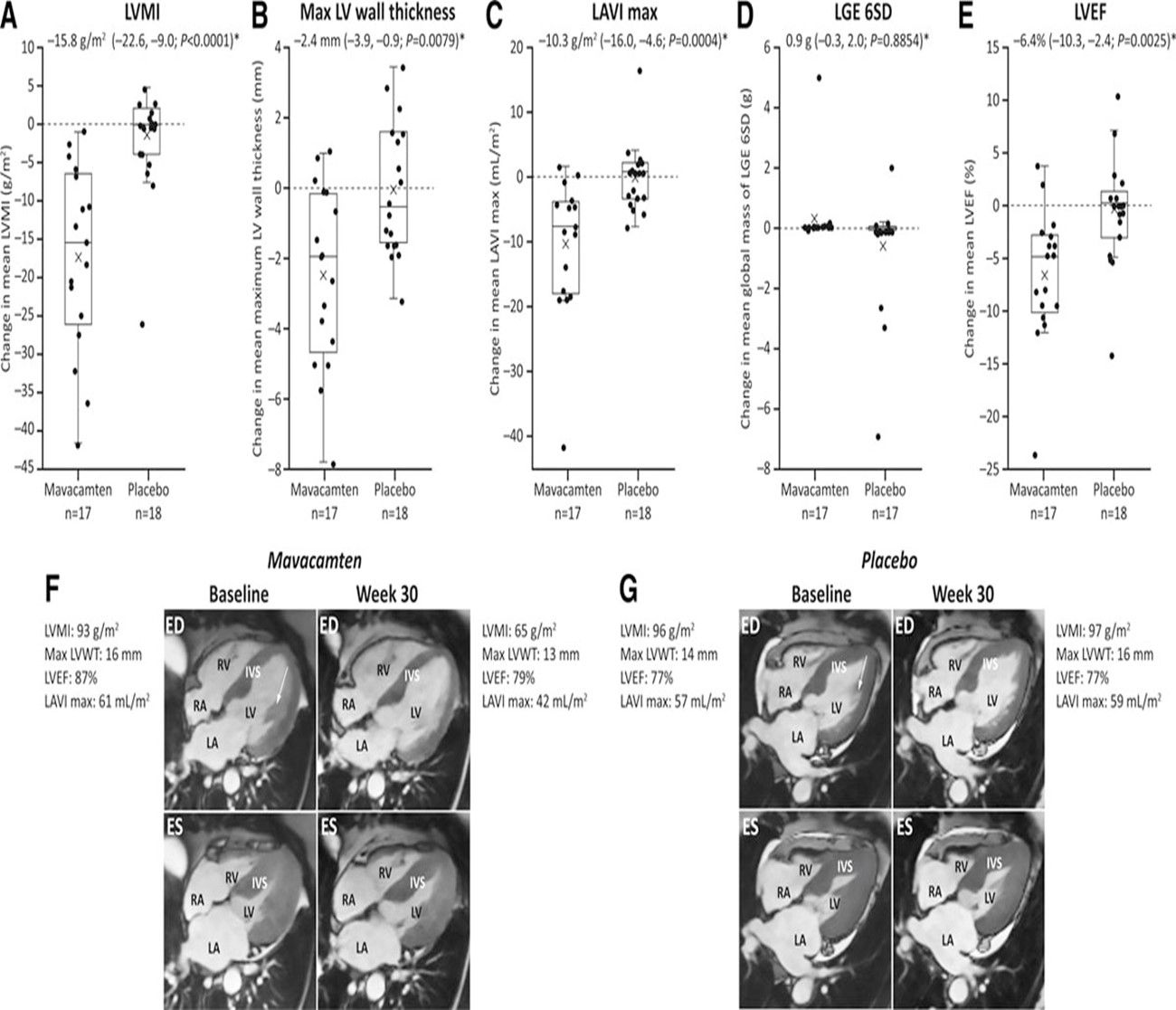 Video 1: CMR Cine Clips at Baseline and at Week 30 for Patients Receiving Mavacamten and Placebo

Anecdotally and across different health care systems, we have enrolled many patients in various trials utilizing cardiac myosin inhibitors and have had positive experiences. For example, at Oregon Health & Science University, we have a large cohort of patients who participated in various mavacamten trials including PIONEER-HCM (n = 9), MAVERICK-HCM (A Phase 2 Study of Mavacamten in Adults With Symptomatic Non-Obstructive Hypertrophic Cardiomyopathy) (n = 8), EXPLORER-HCM (n = 11), and EXPLORER-HCM CMR substudy (n = 5). Currently, we have 6 patients in PIONEER-OLE who all have passed week 144 assessment and all reported feeling well (echocardiographic example shown in Figure 2 and Video 2 for time zero and week 144 assessment) and 18 patients in MAVA-LTE, 11 of them in EXPLORER-LTE with an average follow-up of 62 weeks and 7 in MAVERICK-LTE with an average follow-up of 110 weeks who are satisfied with symptom control and lifestyle that they are not pursuing SRT for HCM at this point.

Figure 2: Echocardiographic Evaluation of a Subject Enrolled in PIONEER-OLE 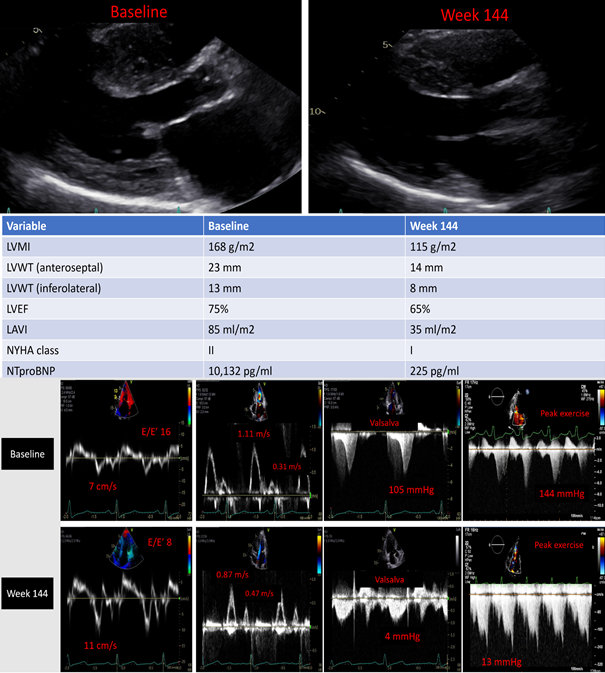 Video 2: Echocardiographic Evaluation of a Subject Enrolled in PIONEER-OLE

Although the data from the EXPLORER-HCM trial are robust and the data from the EXPLORER-HCM CMR substudy are heartening, particularly when taken in the context of existing translational work, further investigation on salutatory remodeling effects of mavacamten is both warranted and planned. The ongoing long-term extension studies are well poised to address these questions.

MAVA-LTE (the EXPLORER HCM cohort) has enrolled 224 patients, and a large proportion of them surpassed 1 year of follow-up. The MAVA-LTE CMR substudy is ongoing and will continue to monitor up to 80 patients in MAVA-EXPLORER (oHCM) and 40 patients in MAVA-MAVERICK (non-obstructive HCM) with serial CMRs for up to 5 years. This represents the most rigorous prospective evaluation of the therapeutic effect of a novel medication in the cardiovascular space that we are aware of. In addition, VALOR-HCM is ongoing and will test mavacamten in a more focused symptomatic population eligible for SRT and allowing disopyramide background therapy. CK-274 is a second cardiac myosin inhibitor currently under investigation in oHCM (REDWOOD-HCM), providing another layer of data on the class effect of this novel family of medications.

As we observe the transformation of the treatment landscape in HCM, the following questions are on our minds:

YOU ARE HERE: Home > Latest in Cardiology > Mavacamten-Induced Cardiac Remodeling in HCM