Medial Artery Calcification: The Silent Killer of the Leg

Medial artery calcification (MAC) is a condition characterized by the presence of diffuse calcium deposits along the medial layer of the arterial wall resulting in a typical "railroad-track" appearance on plain x-ray imaging.1

MAC was first described in 1903 by Mönckeberg, who wrote "I am unable to prove that calcification can lead to obliteration of the vessel, but some of my anatomical findings make it likely".2 Despite this advice, in the last century MAC has been traditionally considered by most authors as a non-occlusive arterial disease and a benign condition, not requiring any treatment.3 However, in the last decades, it has been extensively shown that MAC is strongly associated with cardiovascular events and death in patients with diabetes mellitus (DM) and/or chronic kidney disease (CKD).1,4-7 In their study on patients with DM, Niskanen et al. found that "surprisingly, the impact of MAC to cardiovascular mortality was substantially stronger than that of intimal artery calcifications".6

The mechanism by which MAC has been traditionally linked to adverse cardiovascular events is an indirect non-occlusive effect consisting in arterial wall stiffening and increase in pulse pressure resulting in left ventricular strain, hypertrophy and decreased myocardial perfusion during diastole.8,9 While this mechanism explains the adverse effects of MAC on cardiac events, it appears to be an insufficient explanation for the peripheral vascular outcomes correlated to MAC. Specifically, MAC has been shown to be strongly associated with peripheral arterial disease (PAD) and chronic limb threatening ischemia, and frequently abundant in the distal arterial bed of amputees for vascular causes.10-13 Moreover, a recent work from our group showed that MAC is strongly associated with small artery disease, a condition defined by the occlusion of small, below-the-ankle arteries, thus jeopardizing the fate of the limb (Figure 1).14 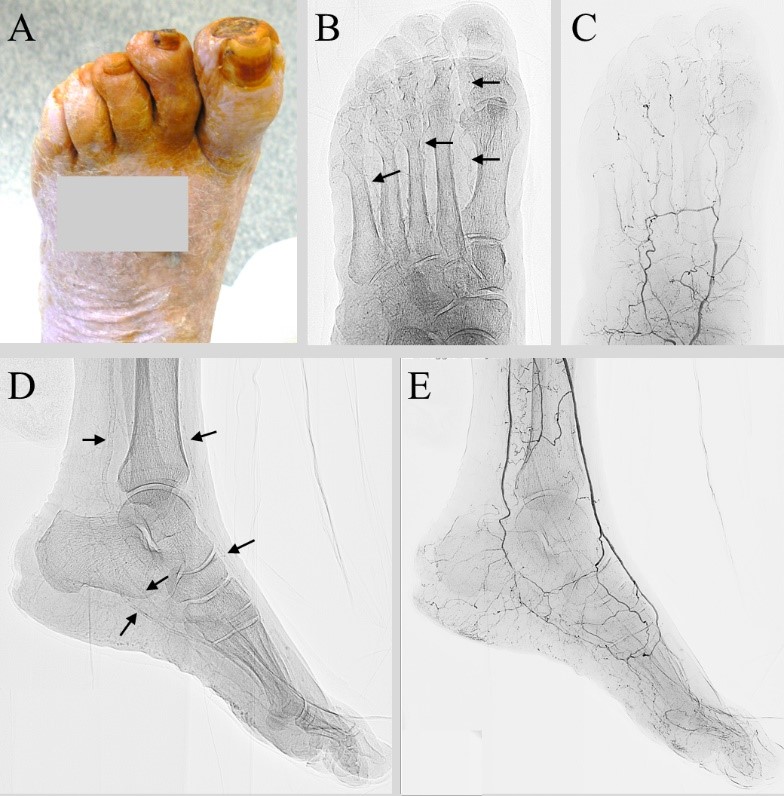 These data suggest that infrapopliteal MAC, defined as MAC affecting below-the-knee and/or below-the-ankle arteries, might be a potential risk factor for lower limb amputations (LLAs).

To investigate this hypothesis, we conducted in January 2020 a systematic review of the literature looking for prospective or retrospective observational studies reporting estimates of the association between infrapopliteal MAC and LLAs in patients with either DM or PAD or both.15 We identified fifteen articles eligible for inclusion in the meta-analysis that collectively included 6,489 patients with a median follow up time of 36 months. The presence of MAC was assessed by either direct visualization of calcifications on imaging tests or indirectly by finding a high ankle-brachial-index score, a condition known to be associated with MAC.16 Pooling together original studies' measure of association between MAC and LLAs in a fixed-effect model based meta-analysis, we found a significantly increased risk of undergoing any kind of LLA for patients with infrapopliteal MAC compared to patients without evidence of MAC (pooled adjusted Risk Ratio [RR] 2.27, 95% Confidence Interval [95% CI]: 1.89-2.74; p<0.0001; I2 25.3%), (Figure 2).

In conclusion, our meta-analysis confirms something that several empirical observations have already suggested over the last decades: having significant infrapopliteal MAC is associated with a worse limb outcome, thus providing a further marker of the at-risk limb. In view of this, MAC carriers might be considered as a further group that would benefit from more aggressive follow up, aiming to optimize primary prevention strategies and enable early diagnosis of foot lesions.

YOU ARE HERE: Home > Latest in Cardiology > Medial Artery Calcification: The Silent Killer of the Leg