Universal Definition and Classification of Heart Failure: A Step in the Right Direction from Failure to Function

Clearly defining heart failure (HF) in clinical practice and for the purposes of clinical research can be elusive and hard to standardize. Most definitions focus on diagnostic features of HF as a clinical syndrome, but there is significant heterogeneity regarding specific diagnostic criteria. In an effort to provide more specificity, some early definitions proposed the incorporation of hemodynamic and metabolic concepts.1,2 However, assessment and application of such parameters can be difficult in routine clinical practice. Further, the criteria used to define HF in clinical trials have been highly variable, posing limitations on the collection of related endpoints of interest, especially HF-related hospitalizations. As the burden of HF continues to increase and growing evidence suggests deficiencies in the implementation of guideline-directed medical therapy (GDMT),3 the need for a universal definition of HF that is clinically relevant, simple, comprehensive, globally applicable, and allows all stakeholders to stage, prognosticate and guide available therapies, was urgently needed.

In response to the necessity for a consensus definition for HF, in 2020 a writing committee comprised of members of the Heart Failure Society of America (HFSA), the Heart Failure Association of the European Society of Cardiology (HFA/ESC), and the Japanese Heart Failure Society (JHFS) across 14 countries and 6 continents assembled a consensus document resulting in the new Universal Definition and Classification of HF.4 The proposed universal definition emphasizes HF is a clinical syndrome with symptoms and/or signs caused by a structural and/or functional cardiac abnormality and corroborated by elevated natriuretic peptide levels and/or objective evidence of pulmonary or systemic congestion. Stages of HF were revised to emphasize the presence (or absence) of symptoms as fundamental in the characterization of disease progression and severity: At risk for HF (Stage A), Pre‐HF (Stage B), Symptomatic HF (Stage C) and Advanced HF (Stage D).

A revised classification of HF by left ventricular ejection fraction (LVEF) was also proposed and is as follows: 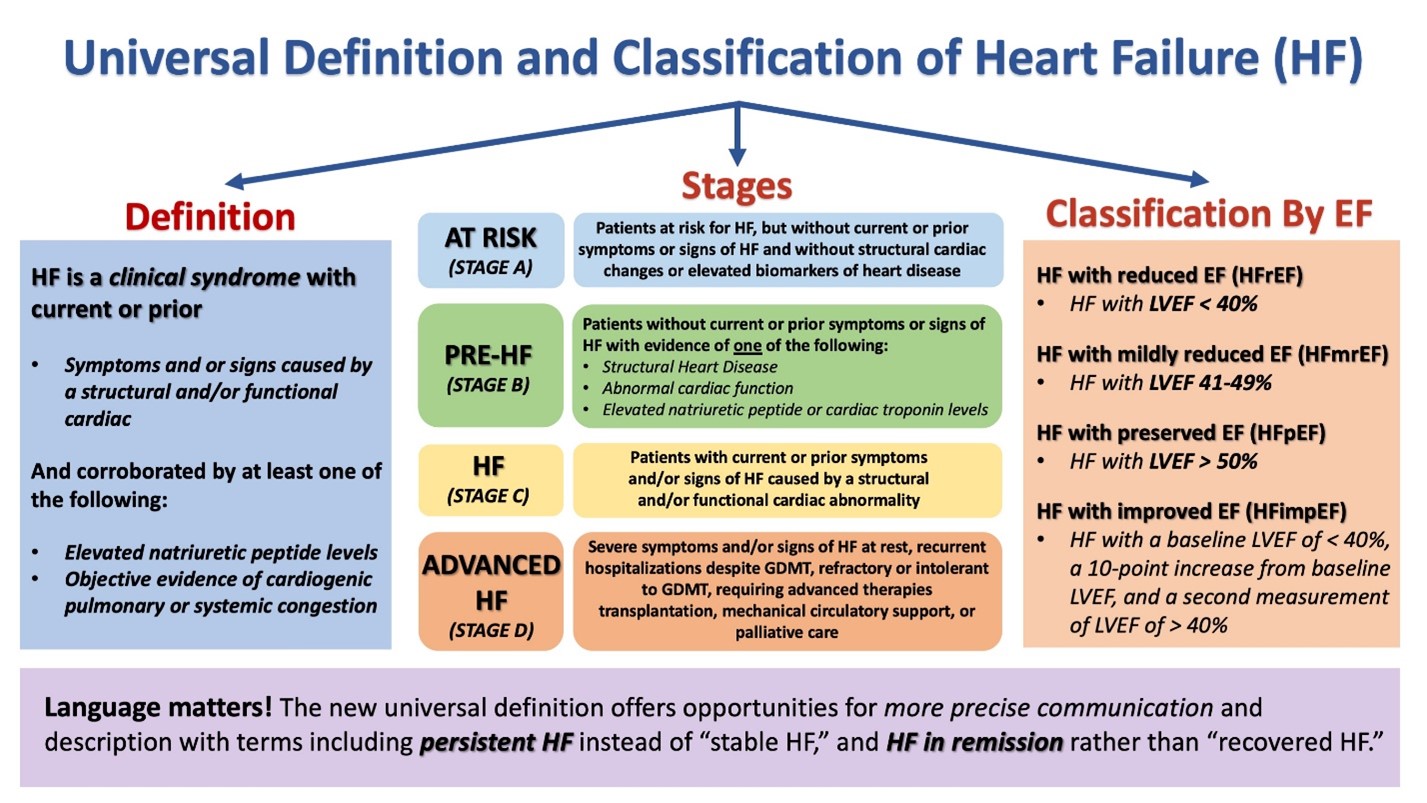 The new Universal Definition and Classification of HF represents a landmark advancement in our field. The standardization of the definition of HF is valuable for several reasons:

Classifying HF by stage grants clinicians the opportunity to communicate with patients in a more practical manner and provide key terms to allow for more effective shared decision-making and care. Clinicians and patients can appreciate HF as a continuum along cardiovascular health with indications to focus on treatment and/or prevention depending on the stage. The pre-HF phase affords opportunities for education, addressing key risk factors, and preventing transition to symptomatic phases wherein heart failure is "active".

As patients with HF are often subclassified according to EF, the committee also proposed a new classification scheme to refine the current nomenclature. Most notable is the new subcategory "HF with improved EF" (HFimpEF), which describes patients who have shown improvement in EF by 10% or more to >40% compared to a baseline measurement. This designation distinguishes patients with previous severely reduced EF from those with only mild reductions at baseline and offers a sense of trajectory of disease.5 This concept is of key importance, as it is known that those with improved EF may still be at risk of recurrent ventricular dysfunction and decompensation, particularly if GDMT is stopped.6 It is also worth noting the inherent limitations of classifying those with HF on the basis of EF alone, as EF is but one characterization, and by itself does not represent the underlying pathophysiology of a particular disease process.7

Lastly, the Universal Definition and Classification of HF offers recognition of the fact that language matters. As we aim to sway away from the traditionally accepted term "heart failure" and transition to "heart function", there are also other key terms introduced by this committee that are worth highlighting. First, clinicians should opt for the term "persistent HF" instead of "stable HF" because even in the setting of stable HF, there are opportunities to optimize therapies that prevent further worsening and/or deterioration or adverse outcomes. Along these same lines, "HF in remission" is defined as an important substitution for the conventionally used term "recovered HF", for patients who experience resolution of their symptoms and/or systolic function, as HF is known to frequently relapse. As heart function cardiologists, it also is important that we convey to patients that improvement does not mean the HF is cured. The semantic changes and classification scheme in the new definition offer opportunities for better communication and patient engagement, wherein clinicians can focus on the implementation of GDMT across a continuum to improve outcomes (Figure 1).

In all, the new Universal Definition and Classification of HF is simple but conceptually comprehensive, has adequate sensitivity and specificity, with near universal applicability, and offers great prognostic and therapeutic validity and utility. It also provides the important opportunity to recognize that the language used by healthcare professionals can have a profound impact on how people living with HF, and those who care for them, approach their disease.

YOU ARE HERE: Home > Latest in Cardiology > Universal Definition and Classification of Heart Failure: A Step in the Right Direction from Failure to Function