Asymptomatic Ventricular Preexcitation (Wolff-Parkinson-White Pattern): When to Be Concerned

Wolff-Parkinson-White (WPW) syndrome affects 0.1-0.3% of the general population.1 The characteristic electrocardiogram (ECG) features are (i) shortened PR interval (<120 ms), (ii) slurred QRS upstroke (delta wave), and (iii) prolonged QRS duration (>120 ms) (Figure 1A). The degree of VPE is determined by the relative conduction properties of the AVN and AP. In the absence of a documented tachyarrhythmia or related symptoms, the ECG findings alone are referred to as WPW pattern. The chief fear of both WPW syndrome and pattern is the risk for sudden cardiac death (SCD) – presumed to result from rapid VPE precipitating ventricular fibrillation (VF). 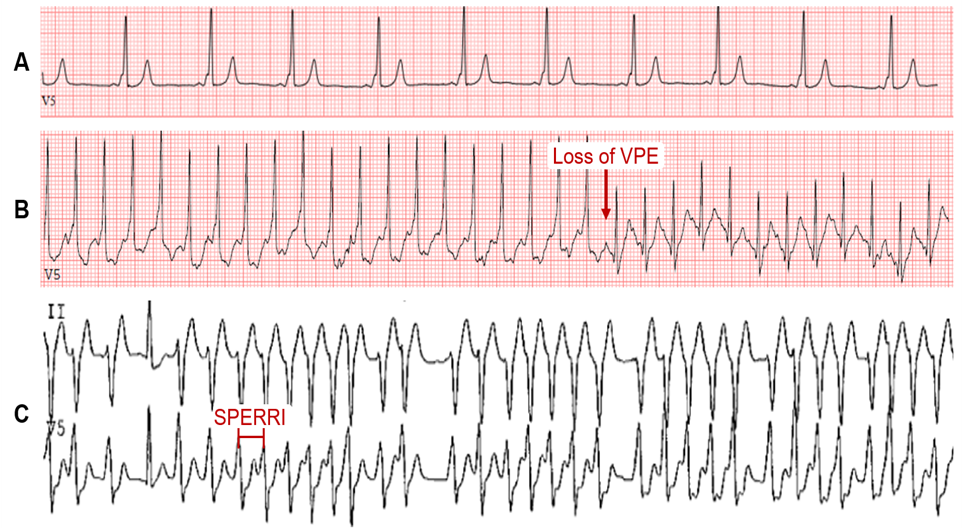 While patients with WPW syndrome may experience symptoms, a significant fraction with WPW pattern remain symptom-free yet live with the perpetual risk of life-threatening arrhythmias.2 The management of these patients remains controversial.

Risk Stratification of Individuals with WPW Pattern
Risk stratification is generally performed by evaluating the anterograde AV conduction rate over the AP through noninvasive or invasive testing. High-risk features on clinical evaluation include male sex, WPW pattern detected in the first two decades of life, history of atrial fibrillation (AF), arrhythmic symptoms (especially syncope), congenital heart disease (e.g., Ebstein's anomaly), or familial WPW syndrome. It is also important to take into consideration patients with high-risk occupations (e.g., pilot, bus driver) and those that participate in moderate-to-high intensity competitive sports.1 Certification from the Federal Motor Career Administration and the Federal Aviation Administration for patients with a WPW pattern requires the absence of symptoms and assessment by a cardiac electrophysiologist. Of the life-threatening events, it has been reported that about 40% of cases occur at rest and about 45% of cases occur during activity.4

Intermittent loss of VPE on serial ECGs or ambulatory monitoring generally marks poor anterograde conduction through the AP and a long AP effective refractory period (ERP), which refers to the longest interval that fails to conduct via the AP. In asymptomatic patients with VPE, this signifies a lower risk of SCD. Similarly, abrupt, and complete loss of VPE on EST suggests AP block and a long anterograde AP ERP. This may manifest as a loss of the delta wave with PR interval and QRS duration normalization on the ECG (Figure 1B).8-11 In theory, complete loss of VPE with the high sympathetic tone during exercise should indicate a non-rapid AP and portends a low risk for VF. While this is a better marker for lower risk than intermittent VPE, the frequency of AP block during EST is often low (about 15%) and, hence, is a low sensitivity finding and does not exclude high-risk accessory APs.12 Nevertheless, the persistence of VPE during EST is highly sensitive for predicting an anterograde effective refractory period of the AP (APERP) ≤250 ms or shortest preexcited RR interval (SPERRI) ≤250 ms and thus warrants further invasive investigation (Figure 1C).2,12-14

Invasive Testing
The key measurements include the APERP and SPERRI during AF. APERP represents the longest coupling interval that cannot conduct over the AP. The longer the APERP, the lower the risk of fatal arrhythmia induction. SPERRI, which is measured during spontaneous or induced AF, represents the shortest time between preexcited QRS complexes during AF. Short APERP and SPERRI suggest rapid anterograde conduction and are associated with high-risk WPW.2 Baseline measurements of APERP ≤240 ms and SPERRI ≤250 ms during AF are considered high-risk features. SPERRI measurement appears superior to APERP measurement in discriminating patients at risk for SCD and who may benefit from ablation.15 However, it is essential to note that survivors of life-threatening arrhythmias associated with WPW have a poor correlation with AP characteristics.4

Isoproterenol infusion during electrophysiology (EP) testing has been proposed to identify high-risk patients by serving as a surrogate for physiologic adrenergic stimulation and enhancing AP conduction.16 However, isoproterenol can result in APERP fluctuations (thought to be related to autonomic system modifications of the AP and AVN), and thresholds are not clearly defined. Thus, APERP measurement during isoproterenol use is unreliable in risk stratification in asymptomatic WPW patients and requires further investigation.15,16

Programmed atrial stimulation at increasing rates can also evaluate the APERP. Incremental-rate atrial pacing near the AP atrial insertion site can determine the maximal rate at which 1:1 AV conduction occurs over the AP. Induction of AF can be attempted to measure SPERRI. If AF cannot be induced, rapid conduction evaluation must rely on APERP or 1:1 conduction with atrial pacing. Induction of AV reentrant tachycardia during pacing, especially with spontaneous degeneration into preexcited AF, is considered a high-risk feature.

Atrial and ventricular stimulation can also aid in determining the number and location of APs.2 A septal-located AP or the presence of multiple APs increases the risk of arrhythmic events, including SCD.13,15 Males tend to have shorter APERP and left-sided APs, whereas females have multiple APs and right-sided APs. Lower risk features would include the lack of tachyarrhythmia inducibility, lack of retrograde AP conduction, and absence of multiple APs.3

Catheter Ablation
Catheter ablation techniques and experience have improved the safety profile of the procedure. Essentially, catheter ablation can potentially cure WPW syndrome, thereby eliminating the risk of SCD associated with VPE. However, debate remains around when and whether ablation should be performed in asymptomatic WPW patients. The critical question is whether the intended benefit of catheter ablation outweighs the risks of the procedure. In general, if an AP contributes to a clinical arrhythmia, if any high-risk feature is present, or if there are multiple APs, then catheter ablation is recommended.17,18 In a study comparing ablation versus no ablation from the WPW prospective registry, malignant arrhythmias were seen solely in the non-ablation cohort. Serious complications from ablation were less than 1%.19 Septal locations of APs were associated with a higher rate of ablation-related bundle branch blocks. Given the risk of SCD is comparatively as low as the risk of procedure-related complications, risk-benefit and operator experience discussions must be factored in before embarking on a potentially lifesaving or altering procedure.20 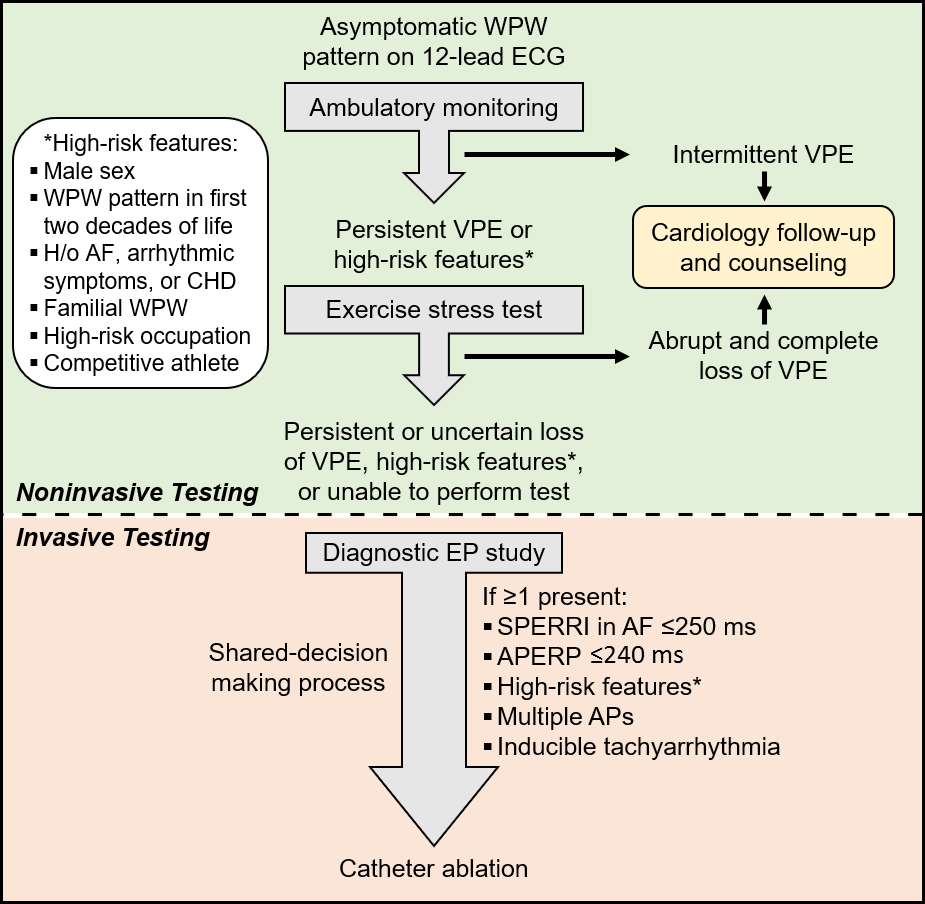 YOU ARE HERE: Home > Latest in Cardiology > Asymptomatic Ventricular Preexcitation (Wolff-Parkinson-White Pattern): When to Be Concerned